My sister played fastpitch softball for many years. She was a pitcher, & despite some protesting at times, I usually enjoyed watching her on the mound. She was good. She possessed three things every fastpitch softball pitcher needs: control, accuracy, & a stellar game face that rarely hinted at her emotional state. There are numerous images I can call to mind of a batter lurching awkwardly forward, the tip of her bat falling & stirring up some dirt, realizing a split second too late that Jessica had thrown a change-up. She expected speed. She was prepared for a ball that might barely graze the outside corner of the plate. She was poised to guard the plate, but, more often than not, the change-up, a pitch that Jessica delivered with the same physical fervor as a fastball, caught her opponent completely off guard.

I thought about these startled batters this past week more than once. Last Thursday, we learned Reagan has Type 1 Diabetes.


It was absolutely the furthest thing from my mind when I woke Thursday. I am unsure of where to even begin relaying all this, as I am still processing it myself. There were some signs, in hindsight, that we initially attributed to a slight cough & some congestion she had for which I took her to the doctor on Tuesday of last week. She was tired. She was sickly. She was a little pale. She had visibly lost a little weight. She had taken a serious interest in drinking.


Thursday morning, Trey decided to take her to see another doctor, an ENT, to see what he thought. I wanted to give her another day on the antibiotic she'd been prescribed Tuesday to see if there was any improvement, but thankfully Trey didn't listen to me. I left Henry with my mom & taught my first class at Delta while Trey took Reagan to the doctor. About the time my class ended, Trey texted me & said to call him re:Reagan. I knew before speaking to him that we were likely headed to the ER.  When Trey confirmed this, I cancelled my next two classes & hurried to the hospital.

The ENT doc was worried about meningitis. The ER doc said her lack of fever indicated to him that she likely didn't have meningitis, & that he wanted to rule many other things out before subjecting her to a spinal tap to test for meningitis. So, we sat around anxiously in the ER for awhile. They swabbed her nose & throat to test for flu & strep, both of which were negative. Her lungs sounded clear, but a possible walking pneumonia diagnosis was thrown around for a bit.

My mother had driven to the hospital with Henry so that I could nurse him, & when I stepped out into the hall to go do that, the nurse asked me if Reagan had ever had any blood work done. She then told me they were going to rerun the blood work because her blood sugar level was over 630 & that had to be a mistake. When I heard that, I knew. The excessive thirst, the weight loss, etc. I felt like I was standing in a pool of light & a choir was singing in the background.

I was saddened & relieved at the same time. I knew what a diabetes diagnosis meant, but I was also glad to have an answer, & to know that while there is no cure for Type 1 Diabetes (something several of the medical professionals we dealt with feel will happen in Reagan's lifetime), it is manageable. I didn't say anything to anyone, I just went & nursed Henry & then returned to Reagan's room, but when the numbers came back a second time, the blood sugar was again extremely elevated. When the ER doc asked us to sit down, I didn't panic because I knew what he was going to tell us.

We were moved to a room in the pediatric ICU so that Reagan could be closely monitored while they intravenously gave her fluids to rehydrate her & insulin to slowly, safely normalize her glucose levels. By Friday, her blood work showed she was clear of the dangerous acids that had begun building as a result of her body's insulin deprivation. She soon looked like herself, & by Saturday she was free of the IV & receiving the insulin she needs via shots.

I know, it sounds terrible, but it's not that bad. We all gathered in her room at ten Saturday morning to learn how to give her the shots. Actually, my dad was absent because he was keeping Henry. That's the number one sign of a family emergency: my dad was keeping Henry. Trey & I gave each other shots, & our moms practiced on each other. My FIL was there too, though curiously I don't think he actually received a shot. Something about his long sleeve shirt. . . Anyway, after receiving one myself I felt much better about things. If you didn't see someone giving you the shot, you would never know you got one. Sunday morning we reconvened to learn how to use a lancet to prick her finger in order to obtain the droplets of blood necessary to check her blood sugar, something we currently do in the neighborhood of five or six times a day, which seems infrequent now after the hourly prick that was necessary for the first twenty-four hours of hospitalization.

I've been so busy shuttling between our house & the hospital, where we received constant education about how to care for Reagan, that I haven't had much time to wallow in feelings of guilt for not realizing my child was dehydrated & her body was slowly shutting down because she doesn't produce the insulin required to convert her food to energy.  The nurses' shifts run 7 to 7, but Trey & I opted for more of a 9 to 9 schedule.  I slept at home with Henry, awoke to hand him over to a grandparent, & then went to relieve Trey from the night shift.  Whatever you've done in your life that was hard &/or frustrating, I bet it didn't involve an infant who expects to nurse a few times a day & a diabetic three-year-old who's in the PICU, a place children under twelve are not welcome.  Yeah.


Though no one wants to see their three-year-old in the hospital, I can't say enough wonderful things about the PICU doctors & nurses. The nurse who oversees diabetes education came in on the weekend - on Saturday & on Sunday - to talk with us. The nurses who routinely had to prick Reagan's finger & administer her shots were great with her, & excellent teachers when it came time to shift the shot duty to those of us who are Reagan's caretakers. I also can't say enough fabulous things about my parents & my in-laws. Irritatingly, I kept thinking of Hillary Clinton's "it takes a village." I don't know about a village, but it did take all six of us. Seven, actually, because Reagan's Aunt Deni also made regular hospital visits & helped to babysit Henry.


Life is, & will always be, a bit different for us now. A whole kiwi is not simply a piece of fruit; it is a piece of fruit that equals ten total carbohydrates. Eight ounces of milk contains 12 total carbohydrates; this was probably the first one I memorized. It's amazing what I've learned in less than a week. In the process of learning how to properly determine the amount of insulin Reagan needs, I've also seen a crystal clear picture of why it's a bad idea to consume copious amounts of carbs, particularly those that quickly raise the blood sugar, like white bread & pasta & sugary drinks, which is basically any drink other than water, milk, & unsweetened tea & coffee. When you have to account for every carb that your child ingests, & then inject her with the needed insulin her body requires to convert the carbs to energy, you realize what you're asking your own body to do when you down a large fry (& why asking it to do this too often can lead to your body quitting on you earlier than you'd prefer).


All carbs are not created equal, either. White bread is converted to sugar almost as quickly as syrup, whereas whole wheat bread slowly makes its way through the body, causing no rapid rise in blood sugar. So we're counting carbs to calculate insulin intake, but we're also shying away from things that cause rapid rises in sugar levels. It's these rapid rises that, over time, cause damage to blood vessels, leading to numerous other problems. It's possible all four of us will live longer, healthier lives now.


I don't know what all this means for the blog. I am sure I'll find a way to ramble on about things at times, but in addition to all the stuff I was doing before, I am now functioning as my daughter's pancreas & I've no idea yet how this new role will affect other areas of my life. I am learning quickly, so we'll see.


I may never again blog about the outside world. I know that the teams who're to play in the Super Bowl have been determined, but I'm not certain which teams won their respective divisions. I think a Manning is involved. I know that David Vitter has decided to run for governor of Louisiana next year.  Not sure how I feel about that one, & I doubt I'll take any time to form an opinion about the matter. I assume Obama hasn't been impeached . . . if he is, it's your job to let me know. I have to shift some responsibilities.
I'll close with a few pictures of Reagan's adventure.

Late Thursday & most of Friday Reagan told us she was hungry. This was a good sign, but they didn't want her eating until her blood was clear of all the mess that had been building up. Soooooo we did everything under the sun to distract her . . .

With her Nana & the new stickers her Aunt Donna brought her: 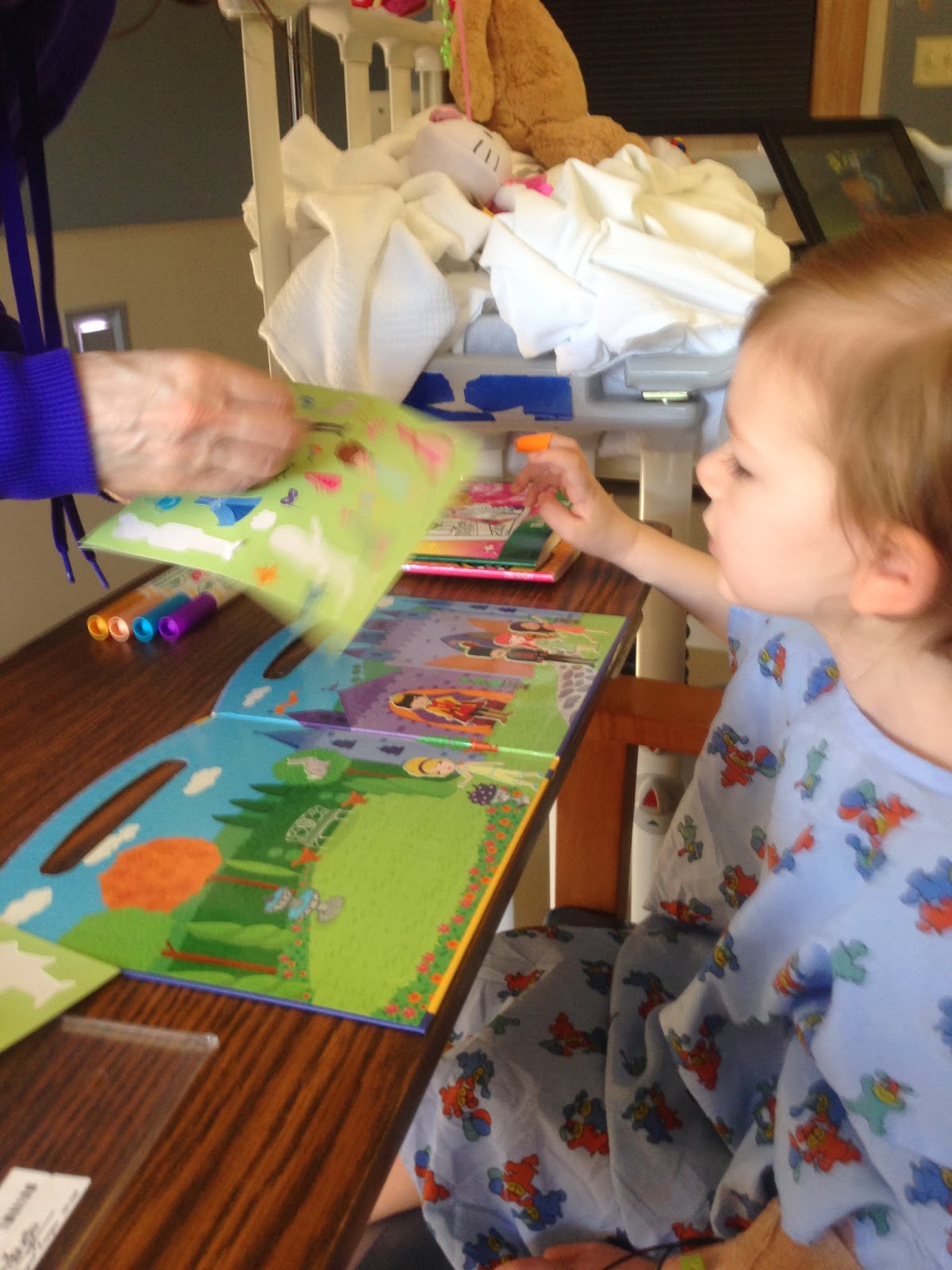 This was her first meal. She ate & ate & ate. Thankfully a lot of what she ate was chicken, which is pretty much a freebie when it comes to counting carbs. 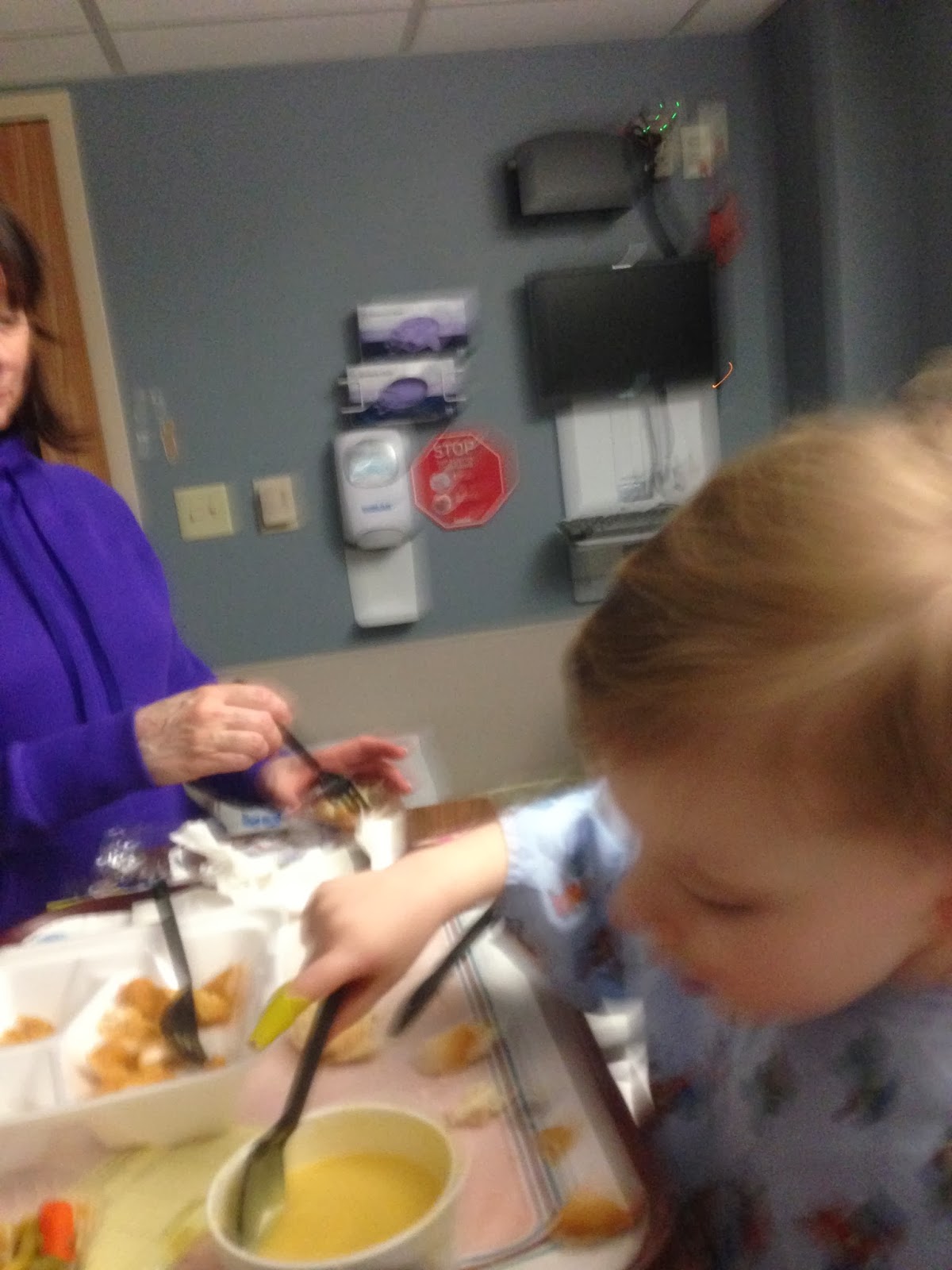 One of many trips she made up & down the PICU hall with her balloons.  Once she got some insulin in her, she was back to her glorious self: 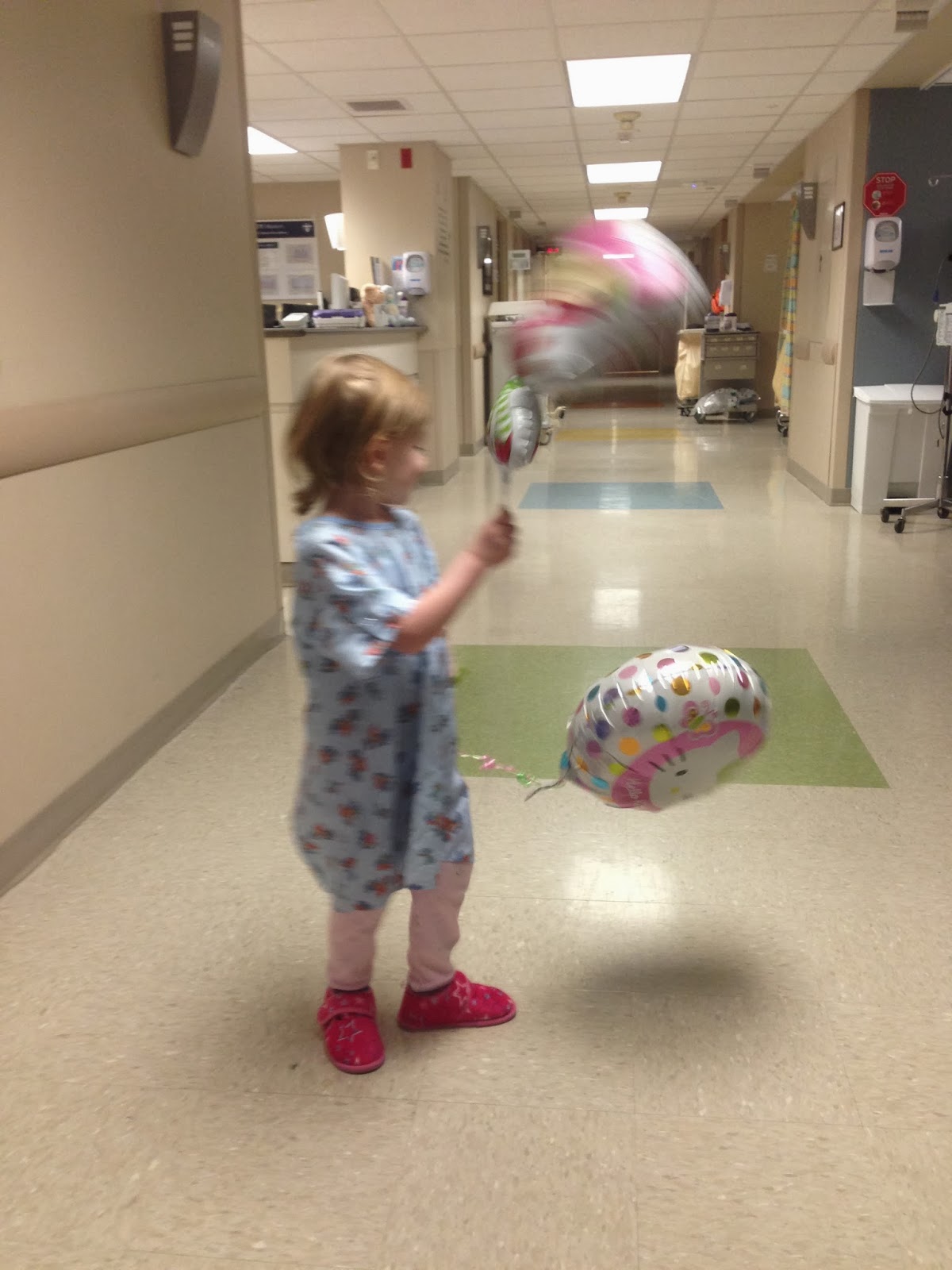 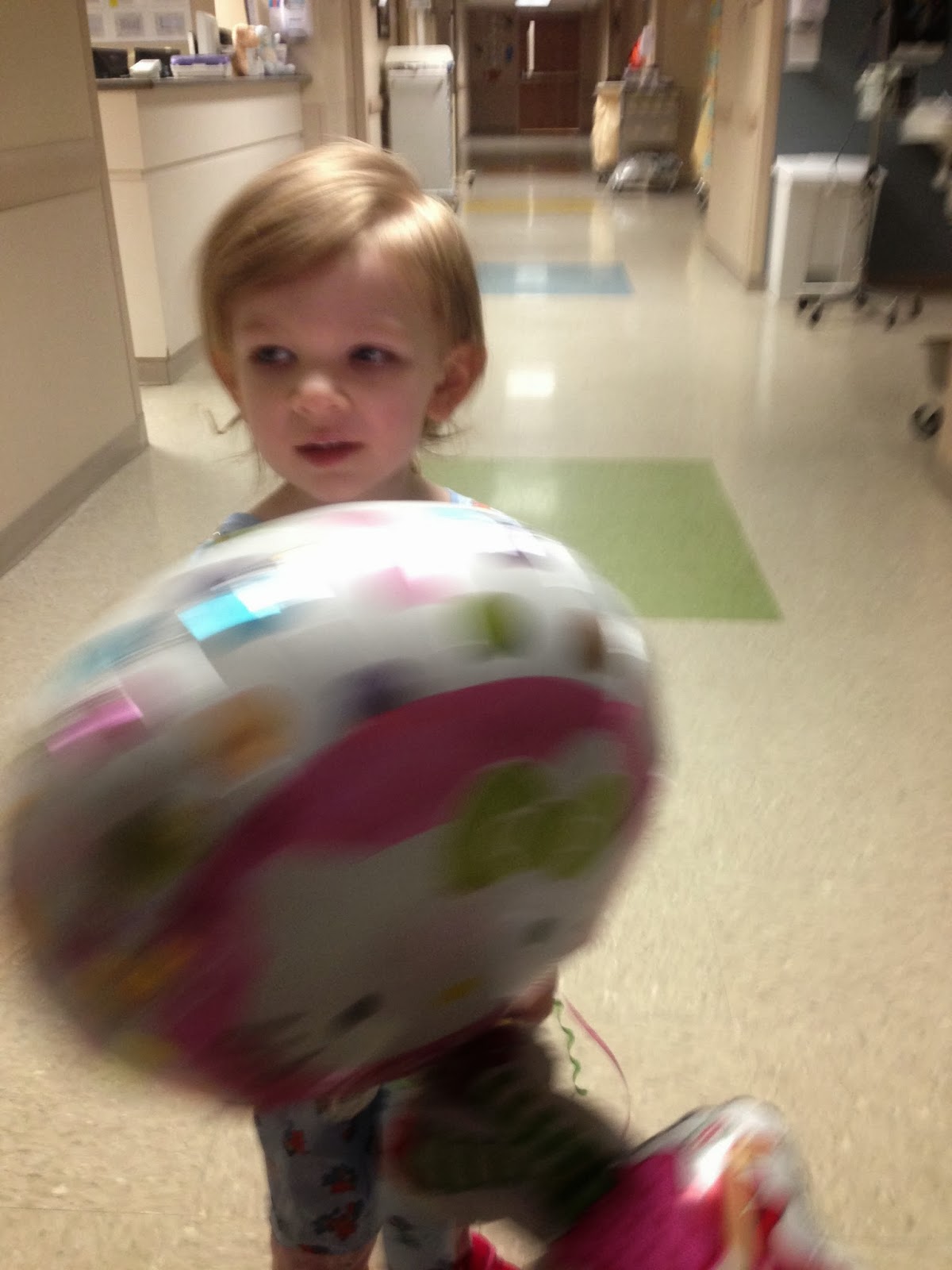 Reagan's hospital stay did wonders for her Hello Kitty collection: 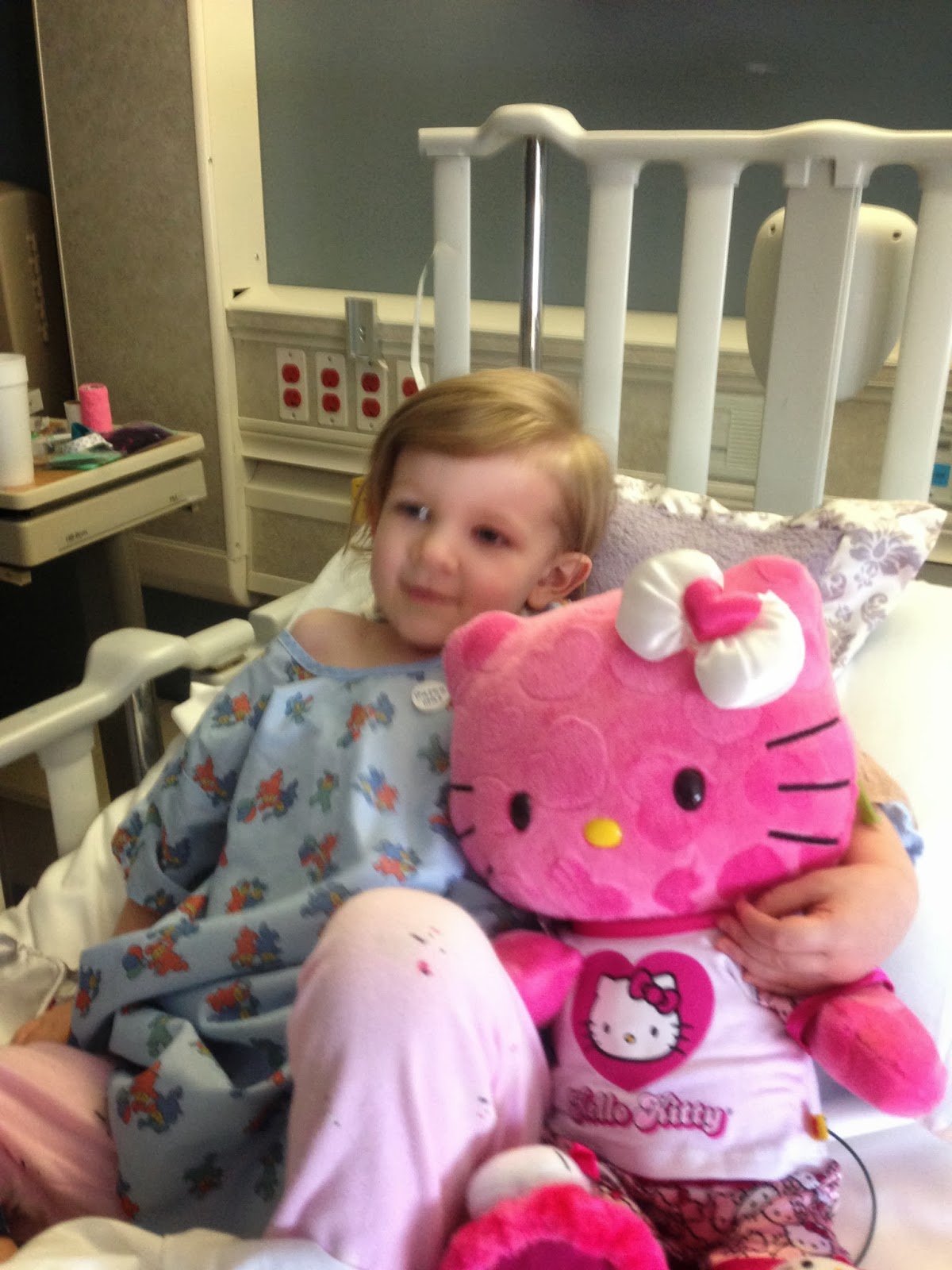 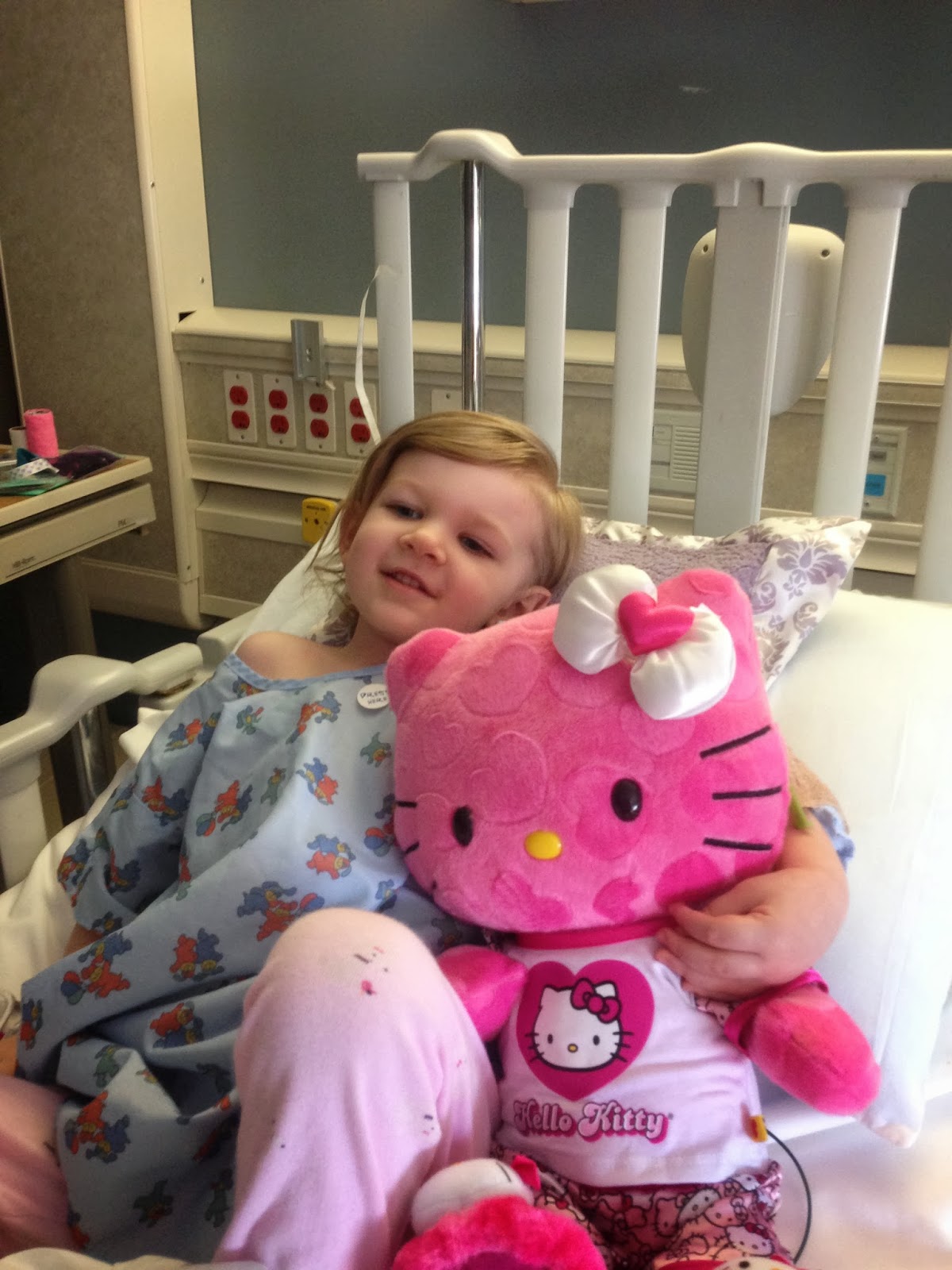 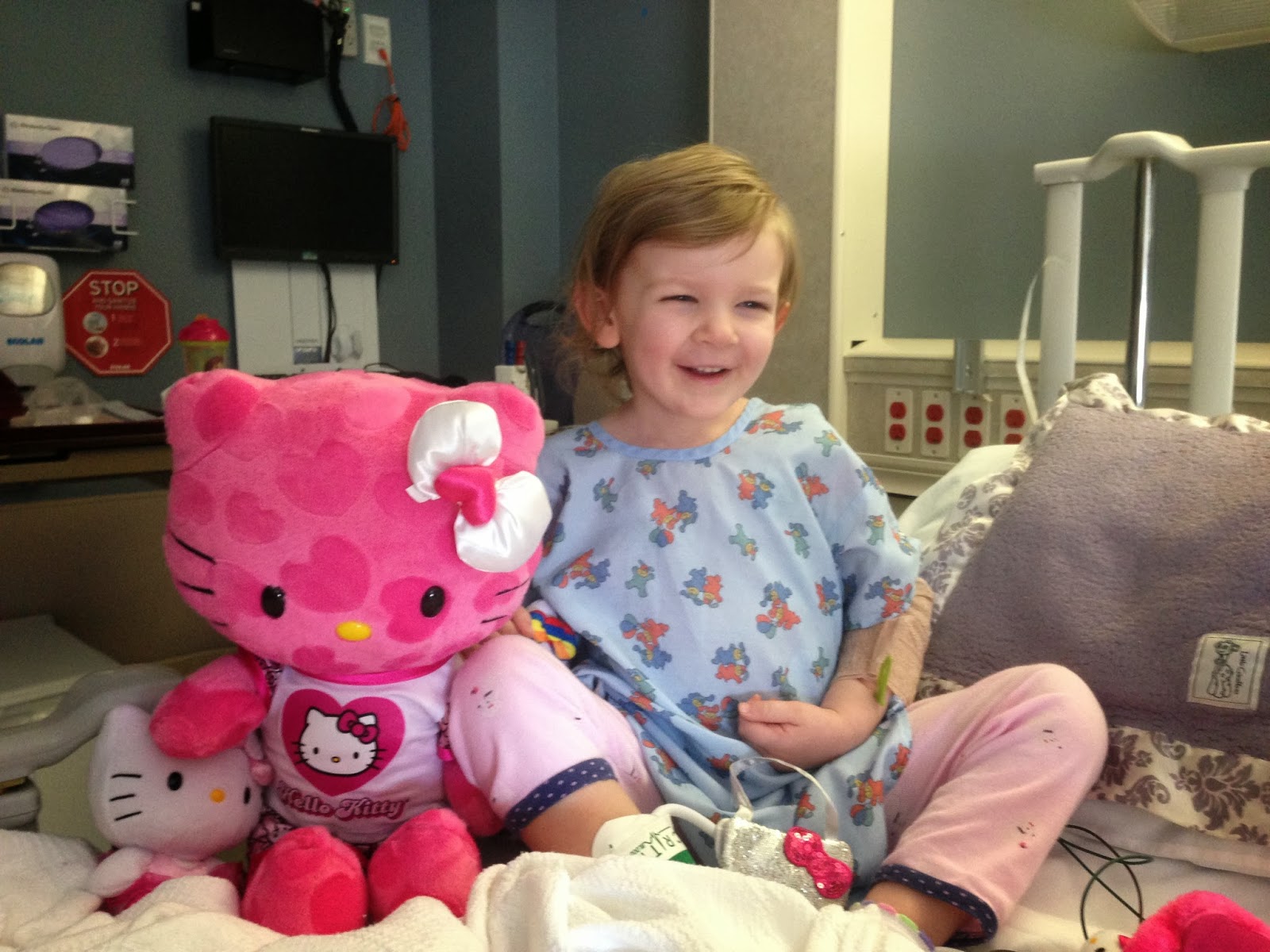 Reagan with her Barbie cards her other Aunt Donna brought her: 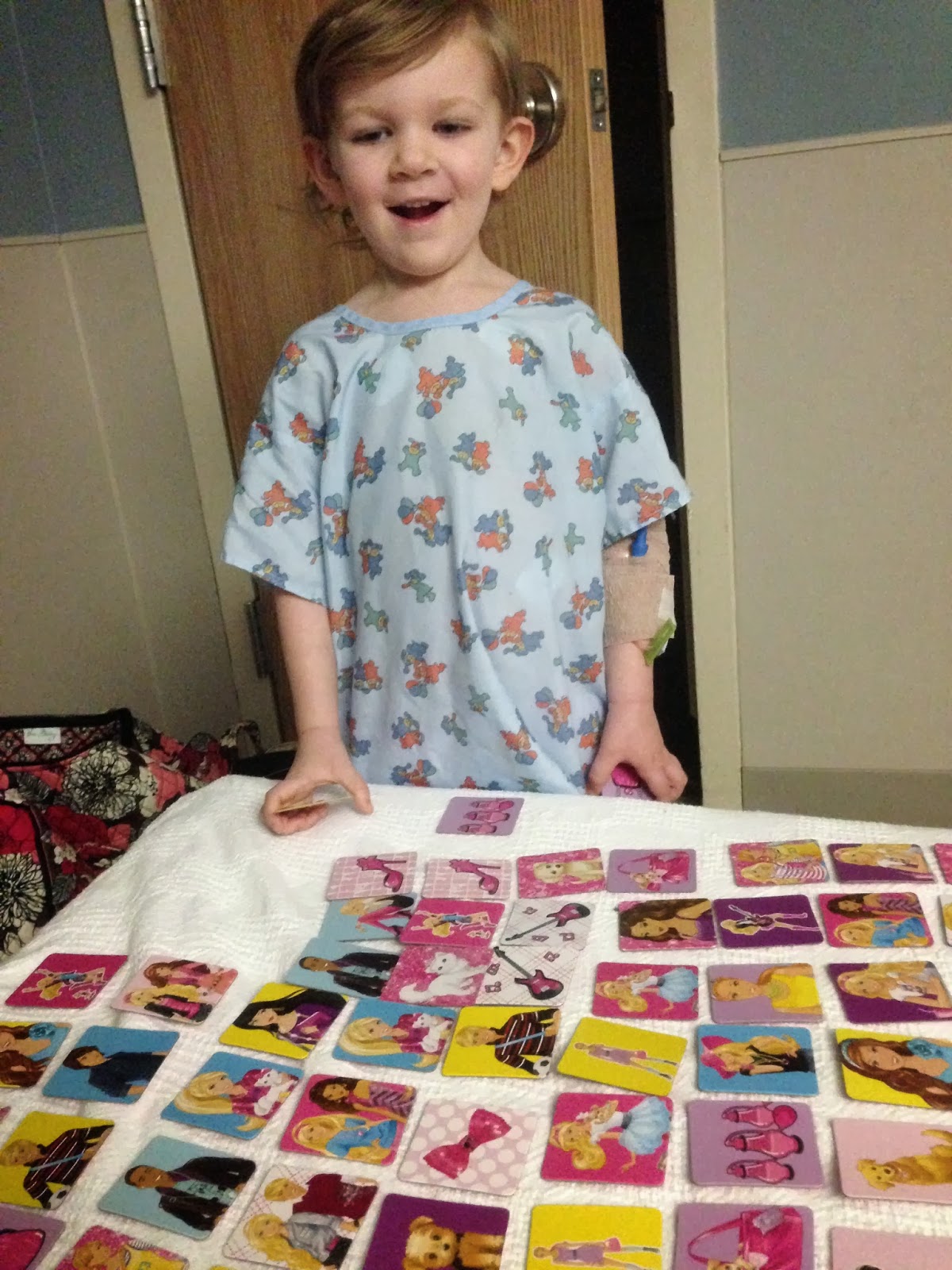 And, perhaps Donna's greatest gift ever, this slinky that Reagan loved. It has seen every inch of the PICU hall: 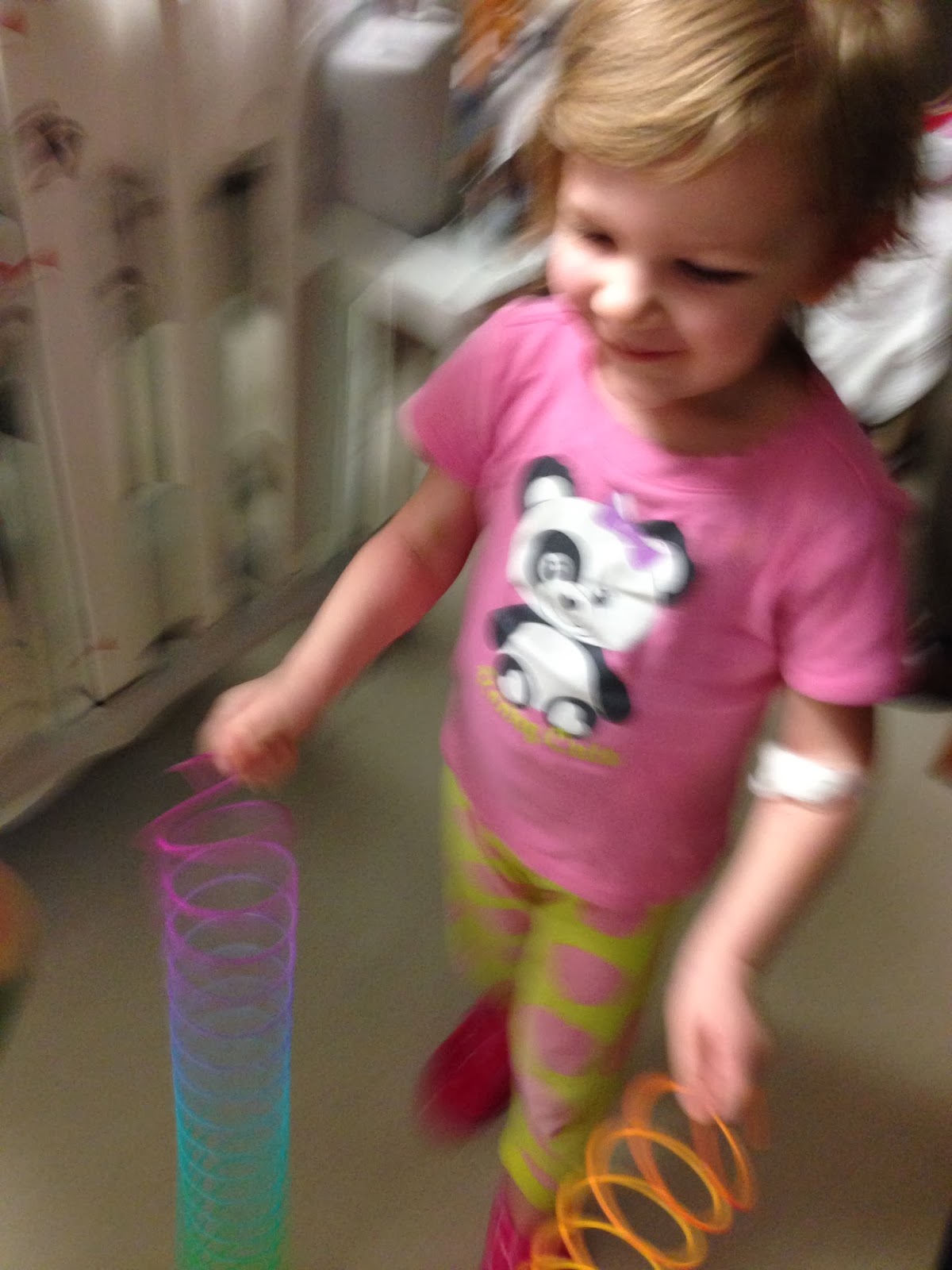 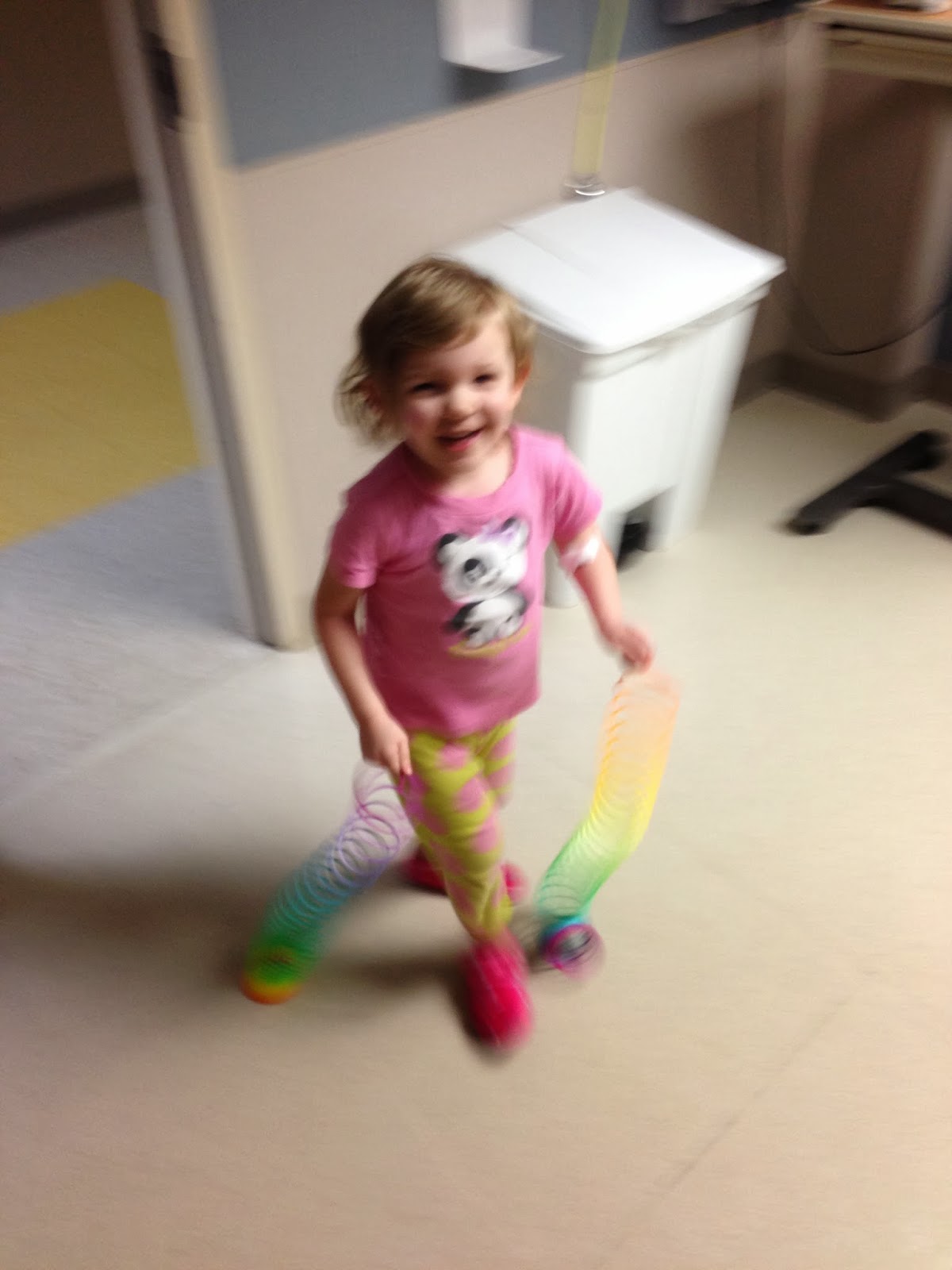 Her Aunt Deni took this. I think this was the last meal she ate before we took her home. The doctor told me Monday that he'd have to discharge her or move her to a room on the regular floor, because she was making for a poor PICU patient: 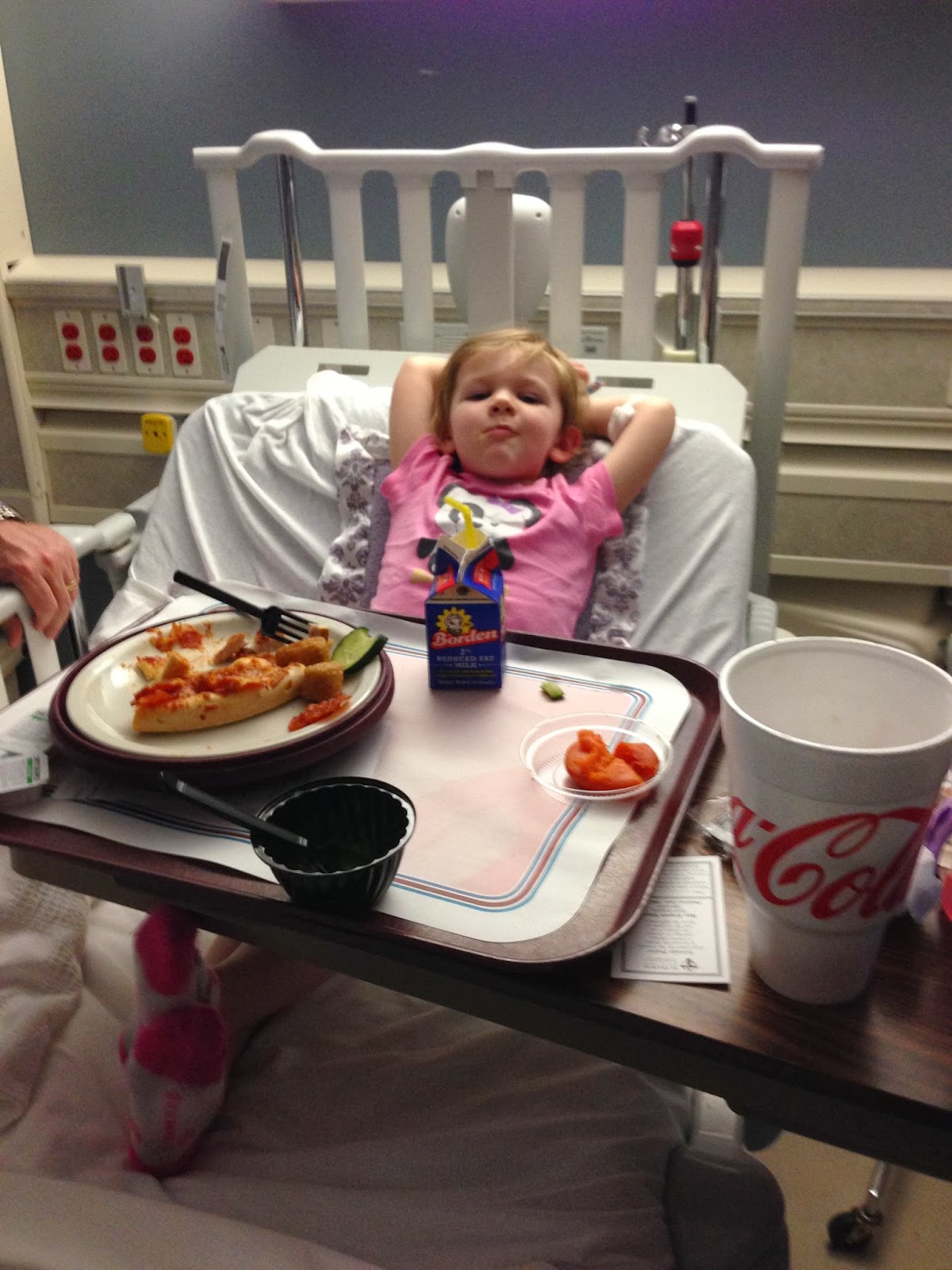 Thank you for the prayers I know many of you prayed for her. She is doing well, & I am beginning to pick my bat up off the plate, & my jaw off the floor. We'll be seeing a pediatric endocrinologist in Jackson soon (you didn't think there'd be one of those in Monroe, did you?). Continued prayers are much appreciated. Anyone reading who has experience with Type I Diabetes, your thoughts, & any advice you have, are welcome. Comment on the blog, on Facebook, or send me a message.