Well I'm still here.  And I mean that in every sense of the word here - physically, mentally, emotionally, & of course, here, blogging away.  I have not checked out . . . but there have been some close calls.

We made a trip to Jackson last week to see a pediatric endocrinologist.  I told you that we'd be seeing a doctor in Shreveport, but that didn't pan out.  The official reference to a specialist has to come from your primary doctor, & when the office here contacted Shreveport for us, we were told there was a two year wait list.  I know.  The Shreveport folks told us to send over Reagan's medical records & they'd see what they could do.  We did send the records to Shreveport, but also pursued other options because, seriously, two years?  I am intelligent, but I can't manage my child's diabetes for two years while waiting to see a doctor.  I suspected they were just saying that until they got a look at Reagan's records to verify her diagnosis . . . or something, I don't know.  I mean are there people out there who attempt to see a pediatric endocrinologist for kicks?  I guess it's possible as I've learned from my few experiences with the ER that there are indeed a host of folks who jet to the ER when their nose runs.

Anyway, Jackson was our next option.  If you didn't know, one of my dad's many talents is defending doctors (or, more specifically, their insurance company) when they're sued.  In legal speak, it's called medmal.  So, he knows a few doctors & they think he's pretty neat since, sadly, many doctors currently pay six figures for their yearly insurance premiums.  Sometimes doctors deserve to be sued, but many times, they do not.  A doctor in Jackson who is himself diabetic recommended an endocrinologist to my dad.  Trey made some calls & we discovered that not only was she accepting new patients, she takes our insurance.  We were sold.

The day of the visit was long.  We were all four dressed & out the door before eight in the morning, & that right there screams Long. Day.  There were two specific instances that tie for most frustrating part of the day; I can't pick one because they both brought me equally close to screaming.  My blood pressure & I don't want to totally relive either incident via my typing it all out for you, so I'll summarize.  We could not find the doctor's office.  We assumed it was somewhere inside one of the many large buildings that comprise The University of Mississippi Medical Center.  We were wrong.  At one point in our quest to find her office, Trey & I were crossing a major road (there was a crosswalk), Trey carrying Reagan & Henry perched on my hip, & a couple stopped their car to ask us if we needed help.  We did eventually find the office, which is located in a random, one-story building near the large, multistoried buildings.  This is good news for the future as you can park right outside the office, as opposed to parking blocks away in a parking garage as we did on our initial visit.

Additional frustration came later, on the drive home, during several phone calls with our pharmacy.  Basically, Reagan is small & currently doesn't require much insulin.  Her new doctor wants us to deliver the insulin using an insulin pen, a neat device that measures insulin in half units, which Reagan sometimes requires.  It's much more precise than using a syringe, & it's probably best that we move to the pen because I've left a trail of improperly disposed syringes all over the twin cities.  Annnyway, the wonderful folks at Blue Cross who've had no issues taking hundreds of dollars from us each month for years now threw a red flag when the pharmacy attempted to fill the insulin prescription because the dosage prescribed will last Reagan longer than ninety days (because, again, she's small).  The insulin pens are filled with specific cartridges that, you got it, will last Reagan longer than ninety days.  I don't know, maybe there's a black market for insulin out there or something & Blue Cross is keeping an eye on it.  I won't keep you in suspense.  We have obtained the needed insulin pen cartridges & managed to maintain our relationship with the Blue Cross folks, though admittedly things are a bit strained.  I don't know what Trey did, &, I don't really care.  I assume it was all legal.  But again, whatever, we got the insulin; it's this year's oxygen.

The visit itself went well.  Thankfully, the most refreshing & reassuring part of the day involved meeting & speaking with Reagan's new doctor, as well as a few of her nurses & a nutritionist.  The plan now is to tweak Reagan's insulin intake & her diet until her glucose readings normalize somewhat.  It's not easy.  As with life, finding the middle ground sometimes seems impossible.  If you & those you love have a fully functional pancreas, say thanks in your prayers tonight; it's an often forgotten organ but it has an important job.  If I had to describe parenting a young child with Type 1 Diabetes in one sentence (as if I can describe anything in one sentence), it is this: waking your three-year-old at two in the morning & insisting she drink some coke because her number has dipped down into the 60s, & then denying her a banana later the same day because her numbers tend to soar in the afternoon.  If she didn't think we were nuts before, this ought to do it.

Here are a few pics of our day in Jackson.  I took this of Reagan on the drive over: 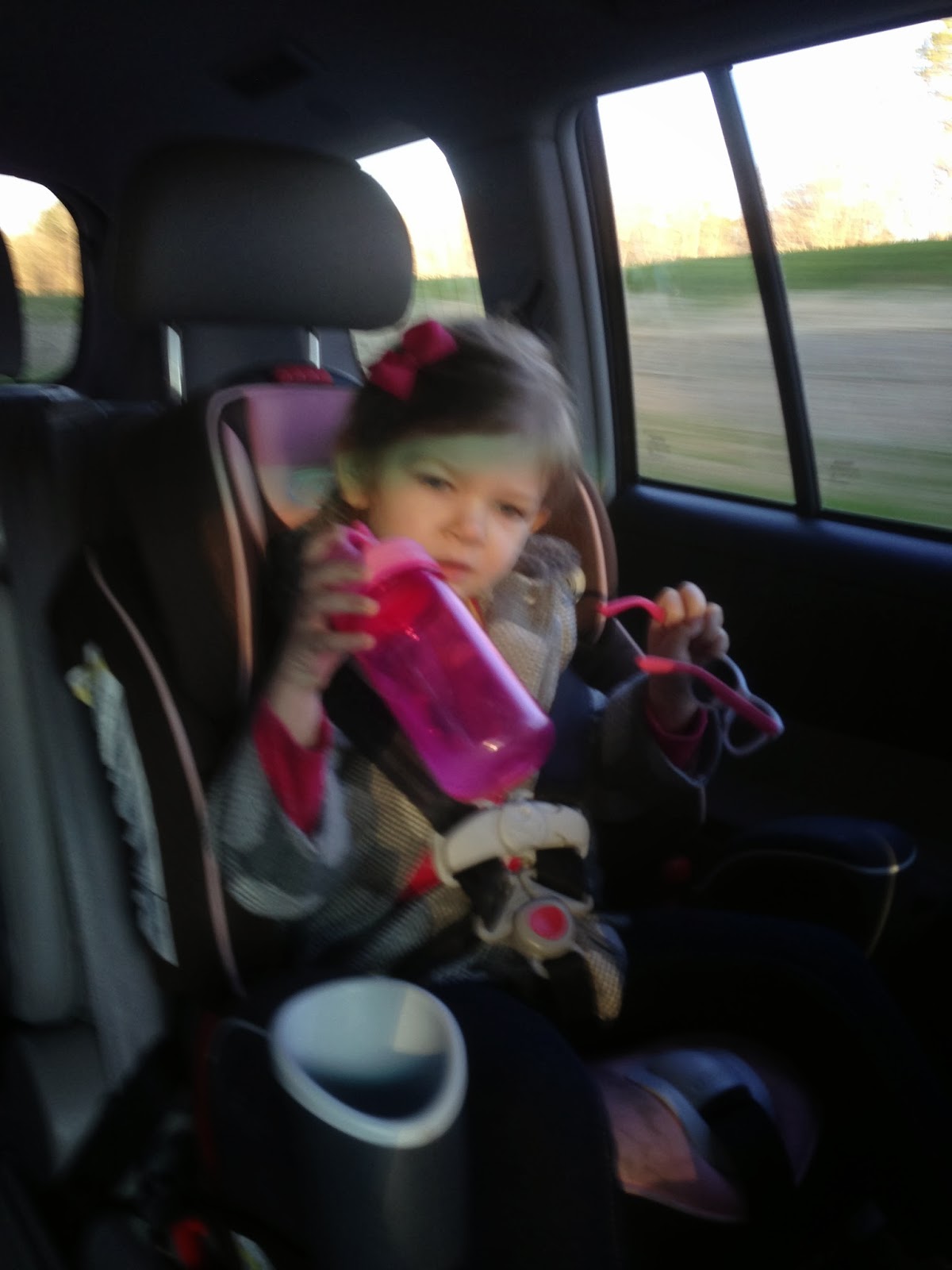 And this in the waiting room: 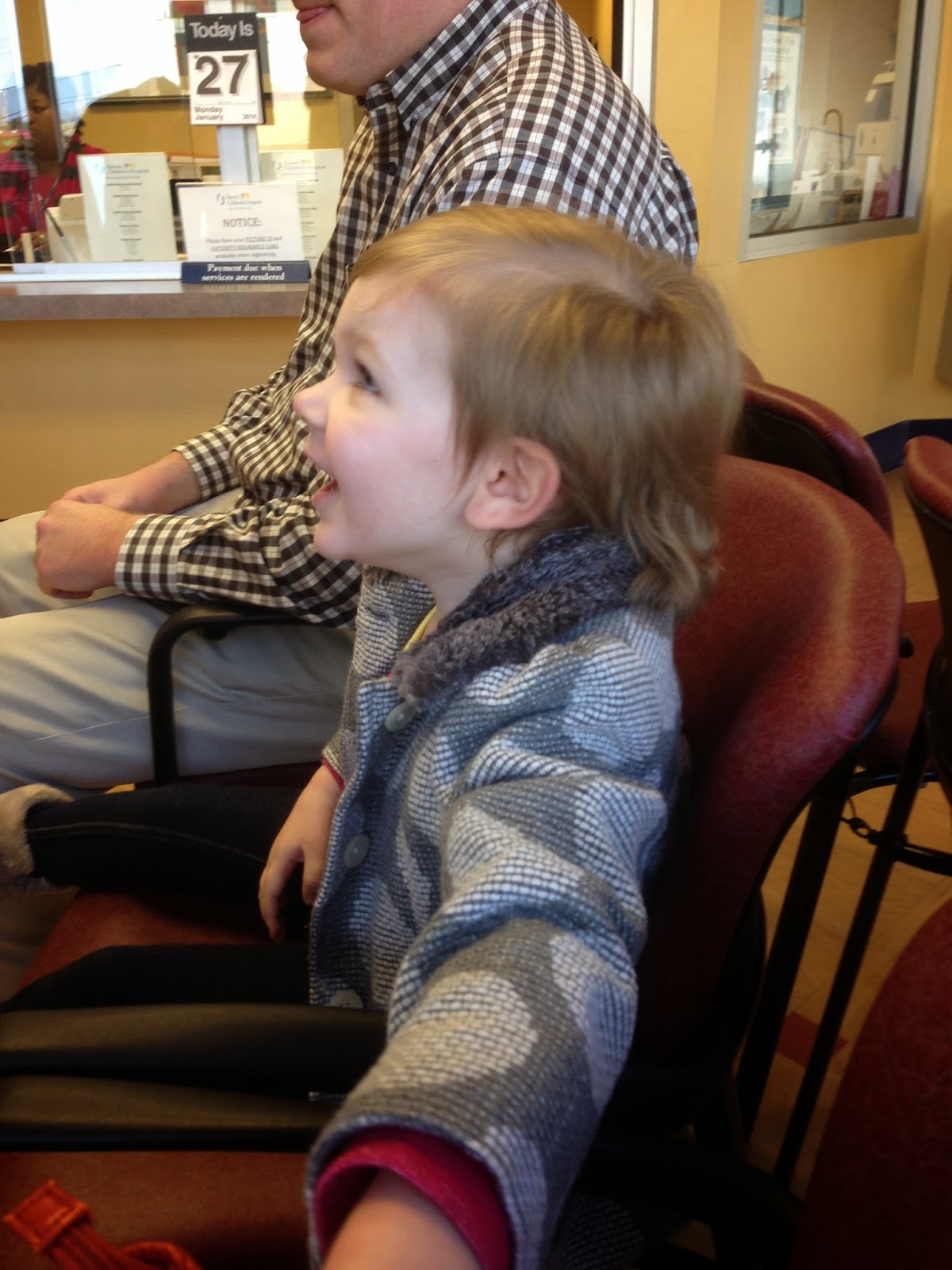 The rest are all Reagan's doing.  The day just didn't present many moments that felt like photo ops: 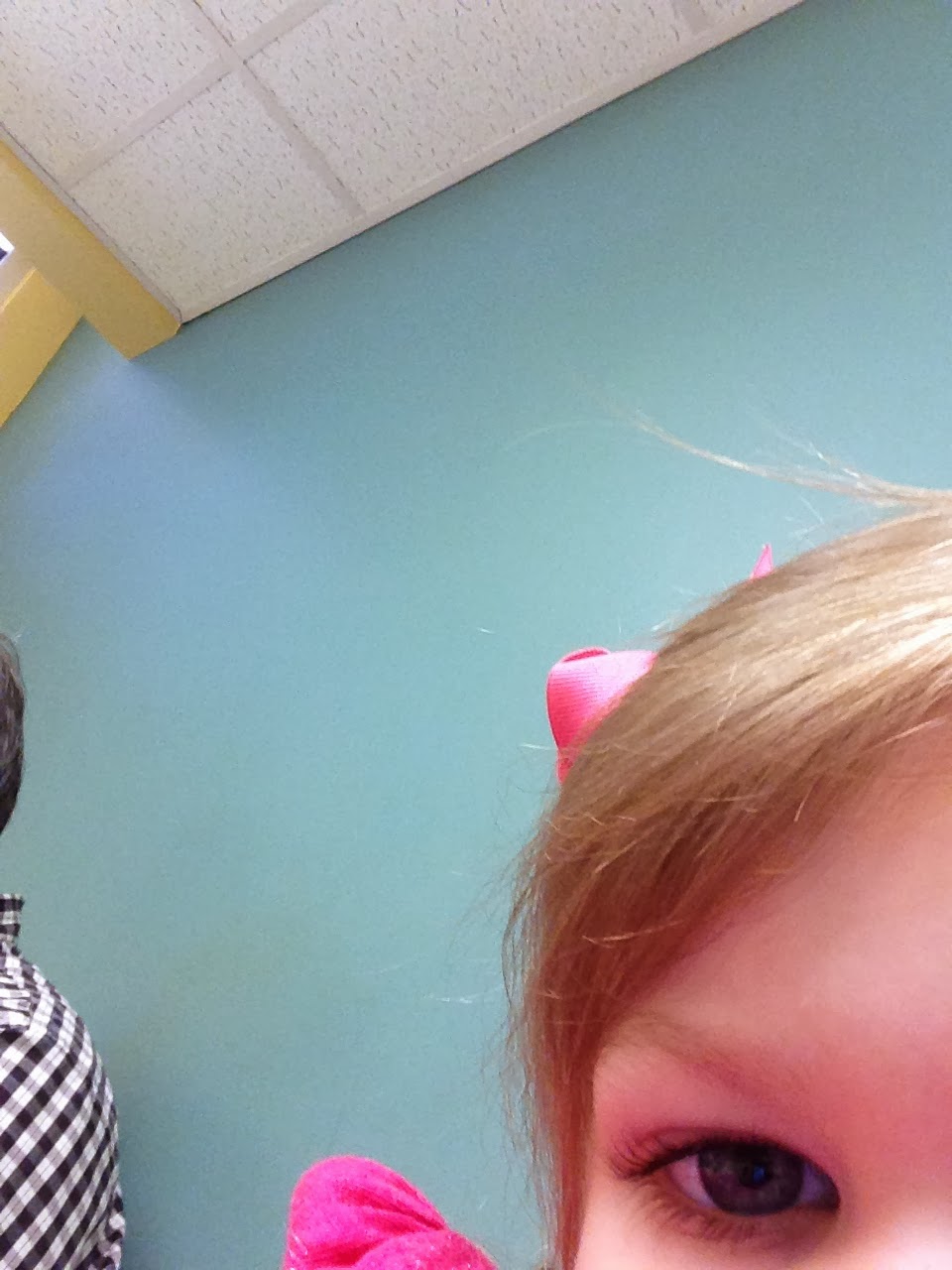 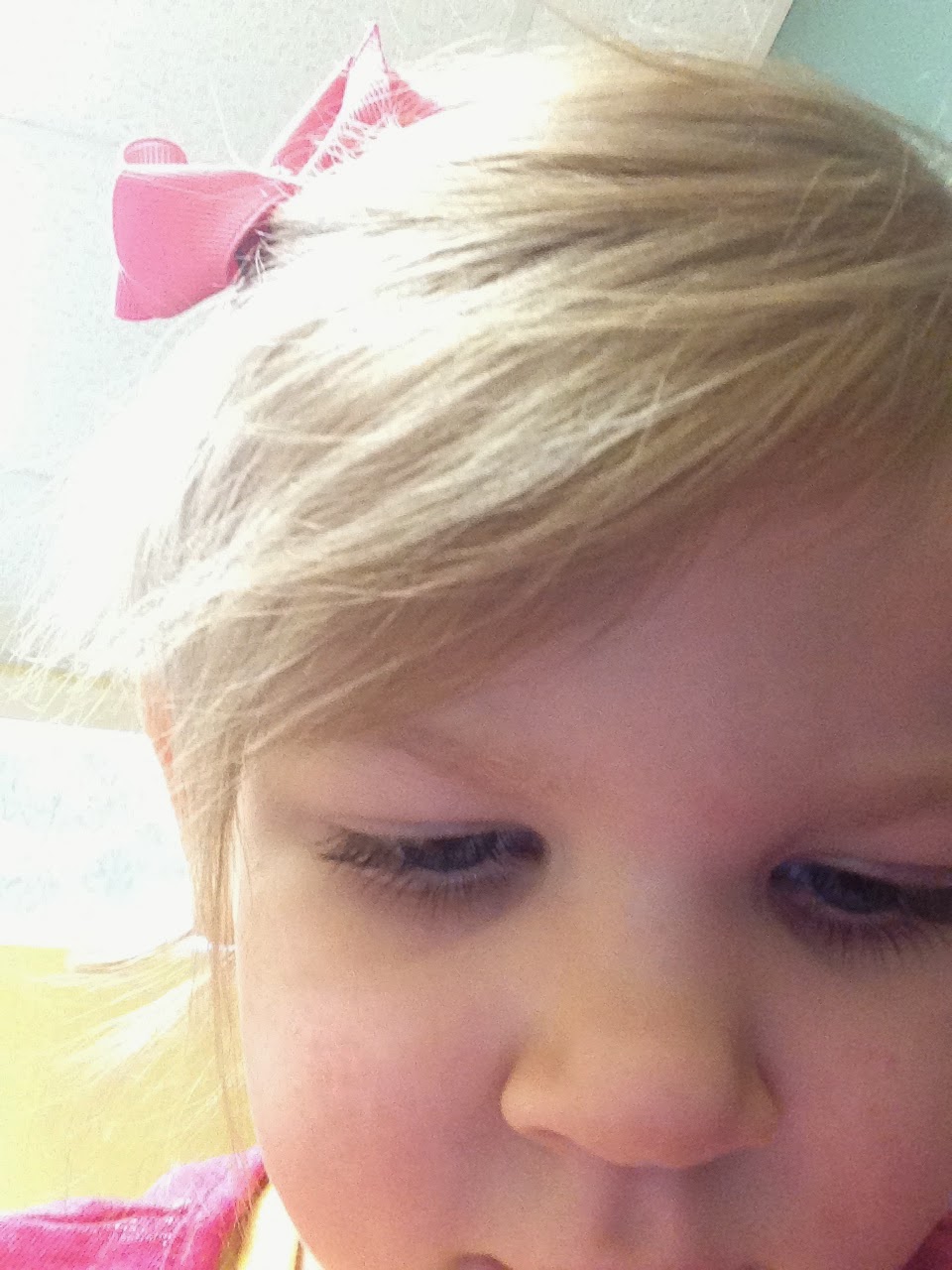 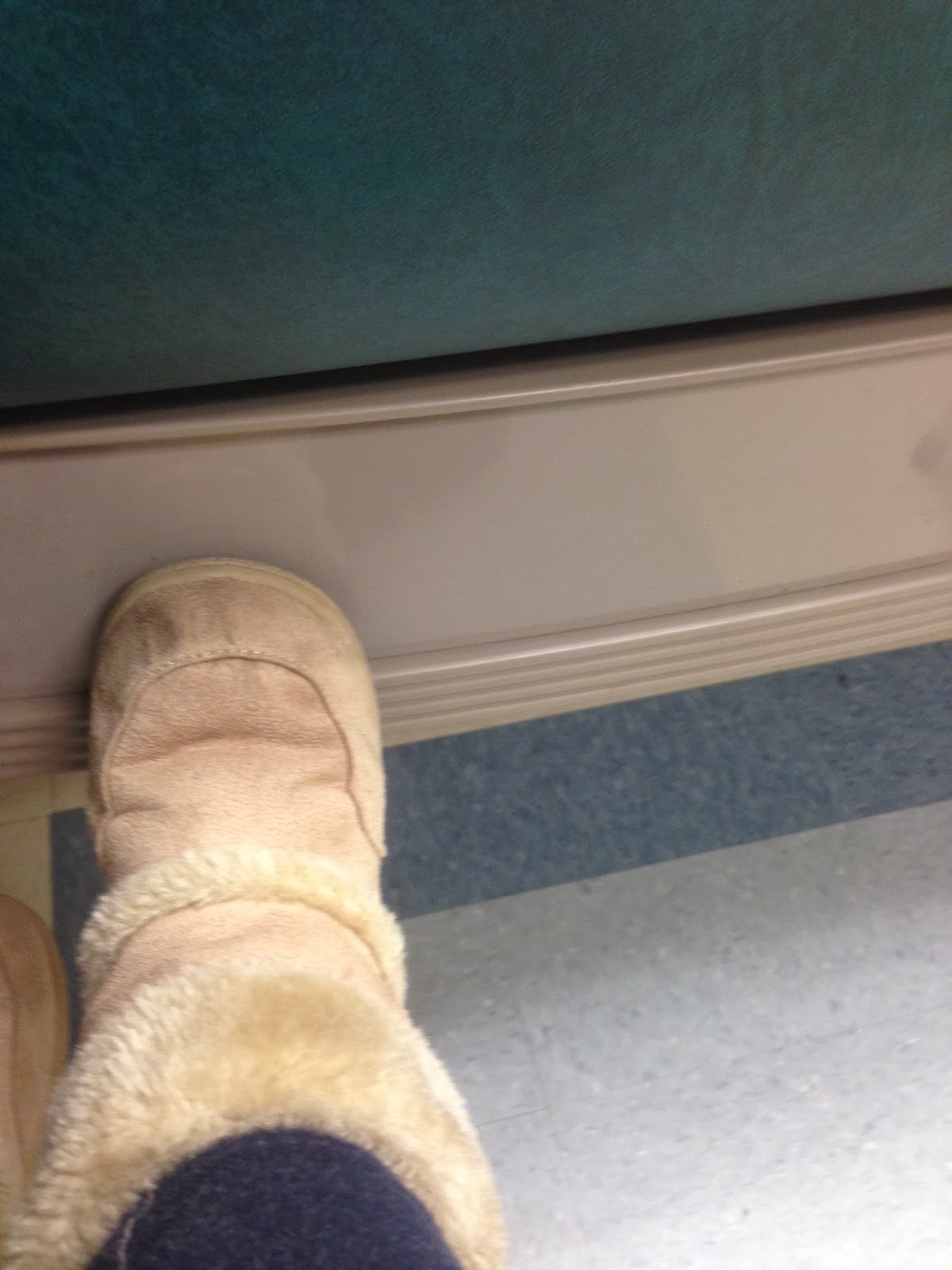 Several young mothers I know have asked me specific questions about Reagan's diagnosis - - what she looked like, what her eating habits were, etc.  I see the worry on their face.  I try to assure them that their young child(ren) most likely don't have undetected Type 1 Diabetes.  It isn't something that goes unnoticed indefinitely.  Once the body lacks proper insulin, changes begin occurring rapidly that you will notice.  Plus, if you are ever truly concerned, I can now check your child's glucose levels in about two seconds.  Just let me know.  Trey checks Reagan's number every morning around two, & she doesn't even wake up, so we can pull off a stealth glucose check if you're interested.

A few people have told me that I just have to write a book.  A book about parenting a diabetic child, that is, not a book about a graduate student who has the hots for her unavailable literature professor & a penchant for shoes she cannot afford . . . anyway, to you all I say, whoa now.  Give me ten or fifteen years.  If this journey on which our family has recently embarked is going to be translated into book form, we're still in the introduction.  So far, here's what I've written: Two weeks ago my three-year-old daughter was diagnosed with Type I Diabetes.  Her glucose levels are still wildly unpredictable, but my Type A personality and I are determined to bend them to our will.  I've waffled between crying & feeling determined, while Reagan's developed a love for expensive almonds dusted with dark cocoa that are only sold at Target & come in at 4 total carbs per bag.  There is a brand new outlet mall just north of her endocrinologist's office in Jackson because, as Paul assures us, ". . . we know that all things work together for good for those who love God . . ."  Stay tuned.

I don't think I've mentioned that I recently read The Book Thief by Markus Zusak.  It was the January book club selection & I finished it the night before Reagan was diagnosed because I was planning to meet with the book club ladies the following evening to discuss it.  Ah, plans.  It's an interesting read.  It's not one you're going to pick up & not be able to put down (it's sloooow, especially at first), but it is fascinating, both the content & the author's unique style of writing.  It is set in Nazi Germany, & it is narrated by Death.  Yes, it is narrated by Death.  I think maybe the Lord was preparing me for what He knew lay ahead concerning Reagan; after reading The Book Thief, you realize that whatever your problems are, your life is still pretty fabulous.

I mean, did you see him?  Did you?  How can life not be fabulous when JACK BAUER is making a comeback?!? 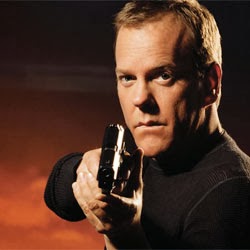