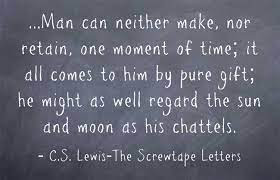 Well, reader, I am forty-one years old today. Remember when I began blogging? Reagan was three months old, and I was a babe of thirty. My goodness.
It has been three months since I blogged. I have been a slave to my keyboard during that time, though little of what I've written would be of much interest to you. My last blog, written on July 15 of this year (you can read it here), was an off-shoot of the graduate course I was taking at that time, a month-long Shakespearean frenzy I actually quite enjoyed. I did make an A in the class and shortly thereafter began another, semester-long class in which I am currently enrolled. At present I am both a student and a teacher, taking Advanced Multicultural Literature online and teaching high school during the day.
There is little down time in my life, but things are going well. The kids have settled into second and fifth grade. They are both playing soccer this fall and continue their piano lessons. They have carefully selected Halloween costumes, and the next few weeks will be utterly insane schedule-wise.
Here are this year's school photos: 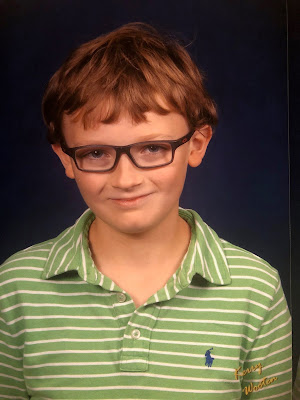 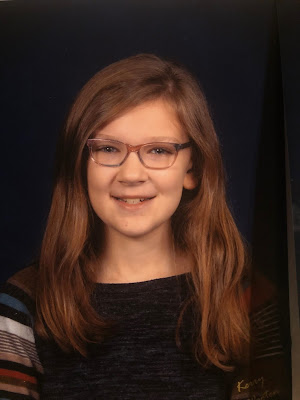 I am sad to report that the last two months I have been unable to read the book club's book of the month, but I have certainly been reading. To fulfill my duties as a student enrolled in Advanced Multicultural Literature, I have recently read The Namesake by Jhumpa Lahiri and The Kite Runner by Khaled Hosseini. Both of these novels are extremely well written. I cannot say I enthusiastically recommend both of them to a wide audience. They both make you think deeply. The Kite Runner is a particularly harrowing read not only because of the situations depicted, but because Afghanistan is, as I type, a continuing tragedy. I have already written a great deal about both of these novels to meet the requirements for my course, and soon I will be writing a whole lot more about one of them to fulfill the requirements for the term paper. I am still digesting both of them. I may one day write more about them in some informal capacity. I may write something of a political nature regarding The Kite Runner and the current situation in Afghanistan, but that will not happen until after eight am on December 1 of this year which is when my term paper is due.

I'm going to share with you something that happened a few weeks ago, and then I am going to go to bed because, as I mentioned, I am old. I am old, and I am tired.
Several weeks ago, a man named Austin Petersen contacted me on Twitter. You probably do not know who he is. He is from Missouri, and we've been acquainted via Twitter for several years now and often discuss politics. He has run for political office a few times, and now he is on the radio in the mornings. This is his Twitter handle:@AP4Liberty. He asked me to join him on the radio to discuss why I don't want Donald Trump to run for President in 2024.
I told him I was interested but not available on weekday mornings because I am now teaching high school English. I reread my message to him before hitting send, and I found it so satisfying. I am teaching high school English, and I am deeply happy. I am bone-tired at the moment, and the fact that I am up writing after nine pm on a Friday night is a resounding testament to how much I miss my blog and how much I miss writing freely, for myself, as opposed to the astonishing amount of academic writing I've been doing lately.
A few weeks ago, I wrote the seniors a four-page letter. I did. I needed to write. I wanted to tell them a few things I'd normally say at the end of the year, but I felt two overwhelming desires, namely the general desire to write and also a desire to impress upon them now how precious time is.
I will read The Screwtape Letters with them in the coming months. I call this passage to mind when I am at the end of my proverbial rope, when I am tempted to feel sorry for myself because I don't have a lot of free time right now. What follows is, as is every word of The Screwtape Letters, written by a demon whose task is to drag men to hell.

Let him have the feeling that he starts each day as the lawful possessor of twenty-four hours. Let him feel as a grievous tax that portion of this property which he has to make over to his employers, and as a generous donation that further portion which he allows to religious duties. But what he must never be permitted to doubt is that the total from which these deductions have been made was, in some mysterious sense, his own personal birthright.

My time is not my own. It never was. I cannot be robbed of it because it was never mine anyway. Every day, every moment, is a gift. A busy schedule is easier to juggle with this mindset. I was given so much time in the last few years, and, as I've discussed here before, I did not do anything particularly fantastic with it. In fact, I gained weight and was, at times, pathetically lazy. I still have many flaws, but I can tell you I do not feel lazy right now. It's a good feeling.
So, I told Austin Petersen I couldn't join him on the radio to discuss Trump and other names floating around regarding 2024 because there would be sixty-something teens who'd miss me terribly if I wasn't at work. Additionally, the morning he wanted to chat with me on his show was Space Cowboy Day at school, and I was not about to miss the chance to go to work dressed like this: 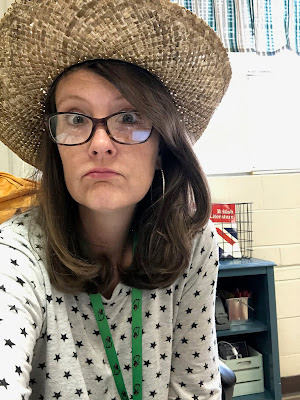 Thank you to anyone reading this who wished me Happy Birthday today. I haven't read through all of my Facebook timeline yet; that is always a wonderful birthday treat. I did have the most wonderful day today. I walked in my classroom this morning to discover some student elves had decorated it. My coworkers were their usual cheerful, giving selves. My wonderful mother brought me lunch, flowers, and hot coffee. Trey took me to the Warehouse for dinner. On the way home, I listened on the radio to some young men I love dominating in their football game.
Tomorrow is go, go, go. Reagan has soccer, and I have essays to grade a play about apartheid in South Africa to read and thoughtfully analyze. What a crazy life.
My birthday is in October every year, and since I hit adulthood I've basically wanted the same three things every year: a cold front, a decent LSU football team, and time to sit and write. To quote Meat Loaf, two out of three ain't bad.
Goodnight, reader. As ever, this old lady appreciates you reading.