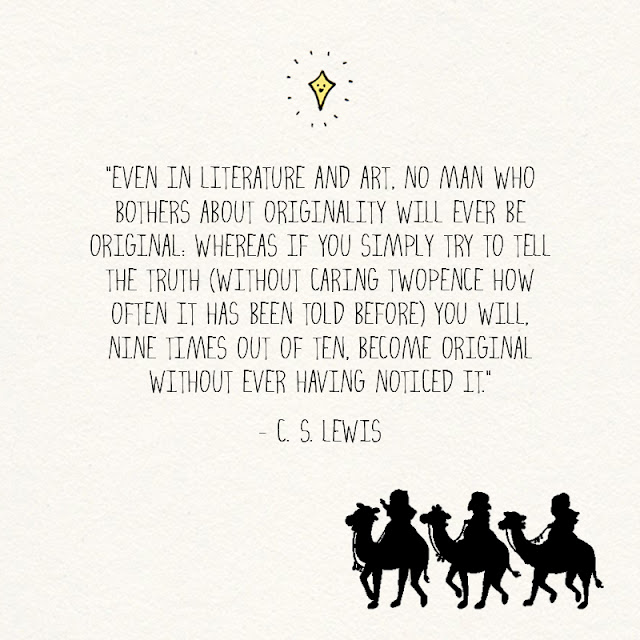 Well, my life is all Shakespeare, all the time right now. I cannot believe I am blogging, but then again, yes I can. My brain has been activated, and it is in overdrive. I'm living on coffee and adrenaline and am high on symbolism right now.

Because a few of you have asked (and there might possibly be a few with whom I haven't shared this riveting story), here is the shortest explanation as to why I, at forty, am taking college courses:

I am returning to the high school classroom to teach Senior English. Part of that job is offering Dual Enrollment English to seniors so they can knock out some basic composition courses. In order to be certified to teach these collegiate-level courses, I need more graduate hours in English.

This is why I now find myself enrolled in a whirlwind four-week course on Shakespeare's Tragedies. Yes, this is one of the courses my wonderful Edie of Dear Miss Moreau fame takes in her inaugural semester as a graduate student, though thankfully I am enjoying this course more than she enjoys hers. Admittedly she is preoccupied with her American Novel professor who broods and is mysterious and beautiful, and so we forgive her indifference to Shakespeare's Tragedies.

It rained this evening. After the rain, I went outside and walked. At first, for about an hour, I walked hard as in for the purpose of exercising. Then I meandered. I took this. 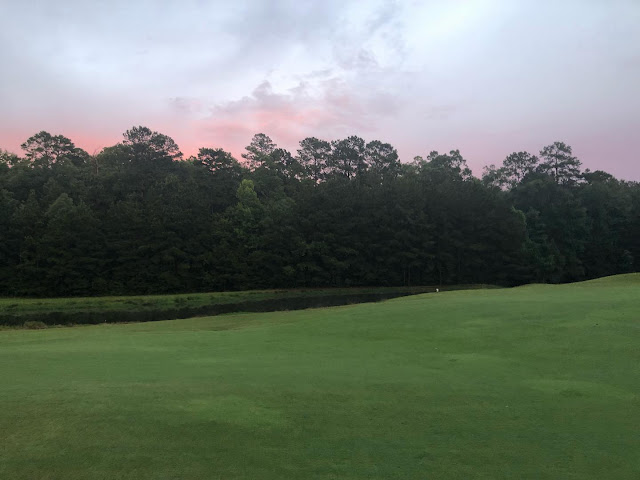 My mind was churning as fast as my legs for most of my walk. It occurs to me that to read Shakespeare is, in some ways, to see slivers of all else you've read over the years, at least if you were an English major and/or are a voracious reader. The first play we're reading is Romeo and Juliet. This week is dedicated to Romeo and Juliet. I've read it, I'm working on a brief but argumentative and properly cited paper on it, and again, my mind is going a thousand miles an hour.
What came before Shakespeare? Well, The Bible. Chaucer. Some Greek tragedies and a lot of philosophy. What came after Shakespeare? Everything. There are whispers of him everywhere, only I didn't necessarily catch them when I first read and studied certain texts because I'd never paid an incredible amount of attention to Shakespeare beyond plot.
I'm going to give you a small example, some things that washed over me today, and then I shall take my leave of you.
Act 1, Scene 5 in Romeo and Juliet features the pair's first meeting. This scene between the two is the thesis of the play, if you'll allow me to use that term. It is dripping with religious language.
Romeo:
If I profane with my unworthiest hand
This holy shrine, the gentle fine is this;
My lips, two blushing pilgrims, ready stand,
To smooth that rough touch with a tender kiss.

Juliet:
Good pilgrim, you do wrong your hand too much,
Which mannerly devotion shows in this;
For saints have hands that pilgrims' hands do touch,
And palm to palm is holy palmers' kiss.


Romeo:
Have not saints lips, and holy palmers too?

Juliet:
Aye, pilgrim, lips that they must use in prayer.

Romeo:
O, then, dear saint, let lips do what hands do;
They pray, grant thou, lest faith turn to despair.


Juliet:
Saints do not move, though grant for prayers' sake.


Romeo:
Then move not, while my prayer's effect I take.
Thus from my lips by thine my sin is purg'd.


Juliet:
Then have my lips the sin that they have took.


Romeo:
Sin from my lips? O trespass sweetly urg'd!
Give me my sin again.


Juliet:
You kiss by the book.

I didn't include the stage directions with this dialogue, but there's some kissing that happens. Juliet is unaware at this point that Romeo is a Montague. This play is of course a tragedy, so it's silly to say it's sad because of course it is, but there is a sense in which it is tremendously frustrating. As you read it, you sometimes think you hear Whitney Houston's "Didn't We Almost Have It All" in the background.
There are undertones of the Garden here, there are. There is a timeless simplicity, an eternal ache, that is pulling from something so basic, a text Shakespeare certainly had available to him. Their first encounter is so lovely. There's witty banter! They kiss! And then moments later Juliet's nurse informs her of Romeo's surname. Now Juliet understands what the audience already knows, that there is more truth to the banter she exchanged with Romeo (Sin from my lips? O trespass sweetly urg'd! / Give me my sin again) than she could have known during those few light moments.
They do marry, as you likely know, and things go downhill after that. I was reading through this scene quoted above earlier today, and it reminded me of something. 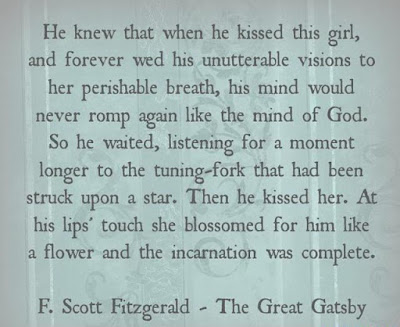 I love these lines of Fitzgerald's so much. His mind would never romp again like the mind of God. To me these lines echo this opening scene between Romeo and Juliet, and of course all of it echoes Adam and Eve's plight in the Garden. There is a moment when perfection hangs in the air. It's so fragile, and you know it won't last, and once the incarnation is complete, once sin and reality descend, there will be a struggle, there will be heartache, and there will be death.
When God made man and woman, he said they were good. He made them in His image, the image of the living God, for each other. They were meant to be together forever in their paradise, but this arrangement was fleeting because they are human. Humans have, since Eve ate the fruit, been trying to grope their way through this conundrum, the exquisite joy of being a sentient being capable of love but also capable of great sin that brings heartache and, eventually, death.
There is this amazing tension throughout Romeo and Juliet that, again, leans into ancient stuff. Juliet says, after her nurse informs of her the sad truth:
My only love, sprung from my only hate!
There are countless examples of this type of phrasing: violent delights, sweet sorrow, a trespass sweetly urg'd, a glooming peace.
The Prince of Verona tells the grieving parents at the end:
See, what a scourge is laid upon your hate, That Heaven finds means to kill your joys with love!
Be it phrasing or theme or plot, so much of it can be traced to the Bible or Shakespeare or, in my opinion, Austen (all romance tropes have their origins in Austen). Human existence, if we do any existential thinking, is this perpetual push and pull between the fact that we are made in the image of a perfect God, but we are also vile sinners, and we cannot move one inch away from either of these truths. There was a moment when only one of these was true, that moment before Eve sinned, and this moment, I believe, haunts the collective human consciousness to such an extent that echoes of it can be found throughout the literature of the Western world.
We explore our options, of course, as to how we can reconcile the immortal tie we have to our Creator and our sinful nature that demands we be punished. Of course, it is my belief that the only true reconciliation is via the son of God who offered Himself once and for all in our place, but my oh my the avenues we explore in film and literature.
A great deal of literature comes to the conclusion that the inevitable end is death; Romeo and Juliet die after they marry (there are questions as to whether or not they consummate the marriage, but their sin is loving each other, thus punishment has to be meted out regardless). Gatsby dies. Frederic Henry says this regarding him and Catherine (who dies) in A Farewell to Arms:
This was the price you paid for sleeping together. This was the end of the trap. This was what people got for loving each other.
Often in literature the knowledge of good and evil is equated with a physical union or a true love or both; the forbidden fruit comes in the form of a love that is forbidden to you for various reasons.
Eve is punished first with pains in childbirth and then with her own death and the eventual death of all of her offspring. Pretty bleak stuff, right? It's absolutely depressing to grapple with unless you believe death is not the end. This is of course what I believe, and this hope, or the possibility of this hope, is woven throughout literature in various and crazy ways.
You knew I would do this, so here we go: Do you know what the book cover to the original Twilight book looks like? It looks like this: 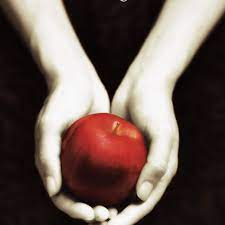 This is marketing genius. I've always maintained there are legit reasons these novels were so successful. I think they were successful for reasons many readers do not even realize. Twilight is rife with the warring tensions that dominate Romeo and Juliet. Edward is dangerous but a protector. Bella is forbidden to him, yet she is what he wants. She is his apple. How does Meyer eventually resolve this tension? Oh well I am glad you asked! No one dies because, yes!, Edward is an immortal vampire, and Bella eventually joins him in his immortal world. It's fiction, obviously, but it plays around with the same basic ideas: we want something forbidden to us, we take it, and we die (and Bella does die in a sense . . . her human life ends).
This has been a bit of a manic post. I haven't proofread it. I am, as I mentioned, very much in the middle of an enjoyable but consuming experience centered around the life and work of William Shakespeare that will conclude in one way or another circa August 3. I just had to stop and purge some thoughts before I return to my lovely research paper.
To conclude I leave you with C.S. Lewis's words regarding originality:

Even in literature and art, no man who bothers about originality will ever be original: whereas if you simply try to tell the truth (without caring twopence how often it has been told before) you will, nine times out of ten, become original without ever having noticed it.

I tend to think the same threads are woven throughout our literature dating back as far as literature goes because the same story is written on all of our hearts. We are perpetually wandering in the Garden, aware of our conundrum, seeking to bridge the divide between our mortal, sinful self, and our immortal self. There is of course only one way to bridge that divide, to return to our Creator, but my goodness is it a wild ride to dive into the various ways literature spanning centuries explores the gulf that opened when Eve took the forbidden fruit.
AZ