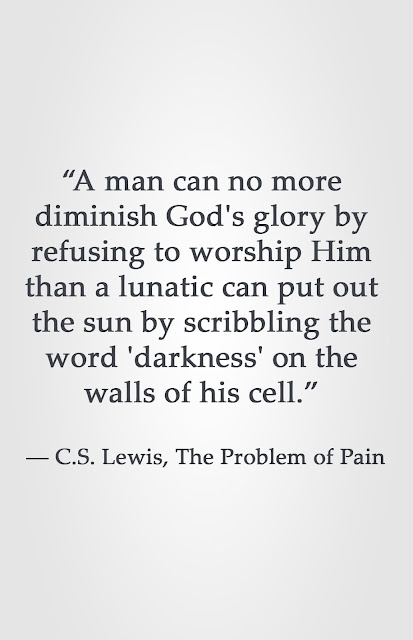 Happy New Year, reader, and Happy Valentine's Day. It has been a few sleeps since last I blogged.
Last I blogged it was Christmas Eve; you can read that here. At that time, I had a friend who was hospitalized with COVID. A few days later, he died. I found myself rereading my own words, the words I'd typed only days prior with him on my mind, the closing lines of Longfellow's poem "I Heard the Bells on Christmas Day." God is not dead, nor doth He sleep.
One of the first thoughts I had when I learned of my friend's death was of Ernest Hemingway. I remember thinking it felt like the end of a Hemingway novel not only because it left an ache in your chest, but because you want to throw the book at the wall and scream. "What? What? That cannot be the ending!" What I know, though, and what he knew, is that his death is not the end, and praise God for that.
I wrote a tribute to my friend that was published by The First. That can be found here. He was, at the time of his death, a newly elected Congressman, and so the nation took an interest in the life and death of this young man who was taken from us far too soon. His widow, Julia, is running for the seat Luke won last year. You can learn more about her - - -> here if you're interested. If you live in Louisiana's 5th Congressional district, I urge you to cast your vote for her on March 20. There are, at present, a variety of silly, loud women serving in Congress. I often read their comments or hear their voices in news blurbs, and I think of what Lady Thatcher would have to say about them. Let me tell you something; Lady Thatcher would love Julia Letlow.

I sat to write today with a singular thought. It's a pretty simple thought, but a myriad of circumstances, including the death of my friend mentioned above, have led to enough of a maelstrom in my mind that I had to take a break from reading and sipping hot tea on this frigid day to write. I will say that I've read a great deal since last we chatted, reader, and I might soon be again forced to sit and blog in order to tell you more about Austen's Northanger Abbey, which was the book club's January book, as well as Cold Mountain, which is our February book. Incidentally, Cold Mountain was my selection, and after hearing some of the feedback from the book club ladies, I might be put on probation for asking them to read what is admittedly not a cheerful book at a time when Louisiana is experiencing winter in a way we haven't experienced winter since Ronald Reagan was President.

So, I digress. That'll be the title of my autobiography should I ever write one (I won't): I Digress. The singular thought that has been dancing in my mind all week was inspired by a February 9 editorial in the New York Times written by Ezra Klein. The title of that piece is, "Should We Dim the Sun? Will We Even Have a Choice?"

Yes, that is actually the title of the piece. Should we dim the sun. I immediately thought of the C.S. Lewis quote above from The Problem of Pain, "A man can no more diminish God's glory by refusing to worship Him than a lunatic can put out the sun by scribbling the word 'darkness' on the walls of his cell."

Increasingly, public policy is crafted by individuals who have no firm concept of their place in the world. Politicians who do not know God and do not fear God read editorials about dimming the sun, and their belief that they are powerful, important people grows. They seek to foist nonsensical policy on the American people, policy that is predicated on the idea that human beings can control things we ultimately cannot control.

That is, essentially, what I sat down this afternoon to say: We are specks in time; we came from dust, and to dust we shall return, and the sun will bear down on us until the Lord snuffs it out.

I said something to a friend this last week that was just a throwaway comment at the time, but my words came back to me later. I said that this last year has given my young kids unrealistic expectations about the extent to which viruses, hurricanes, and snow will factor into their daily lives. As you might know, we had a beautiful snow in my part of Louisiana in January, and in a rare occurrence, we are now looking at more snow over the course of this next week.
Here are some pictures of last month's Louisiana snow. A caveat: last month's snow fell after dark, and we enjoyed it most of the next day. I put the kids to bed that night, and then I went for a walk outside in the dark as it snowed. This is an experience I highly recommend. 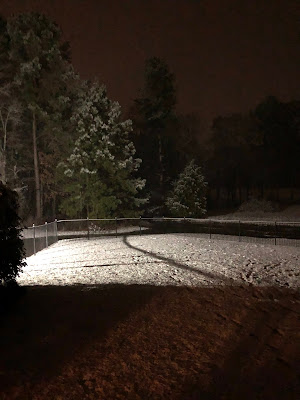 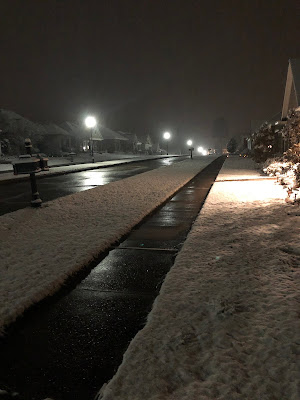 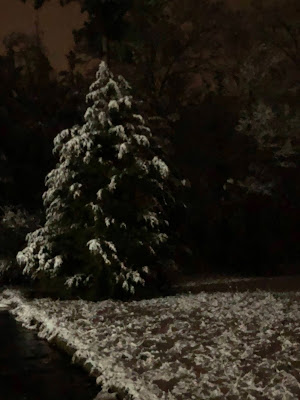 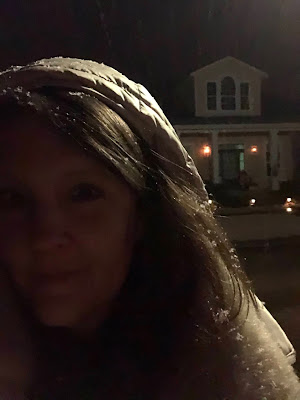 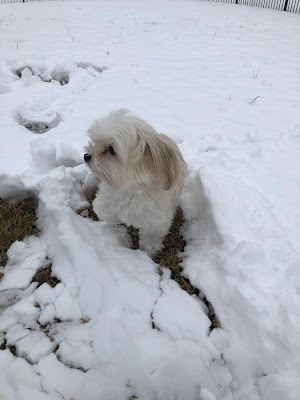 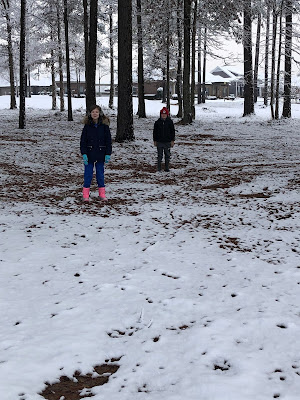 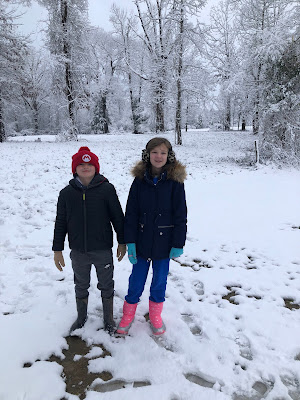 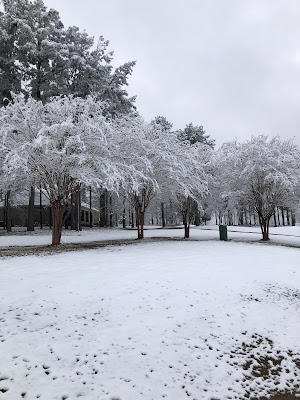 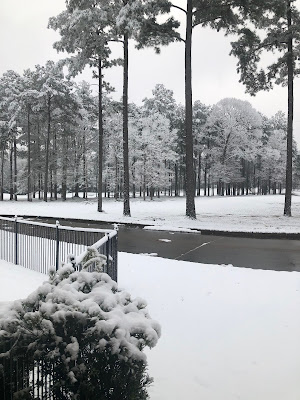 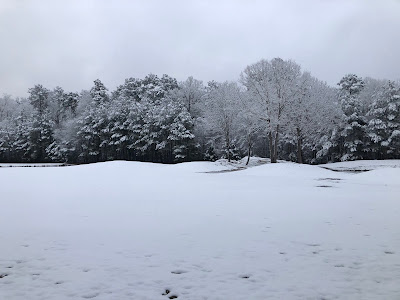 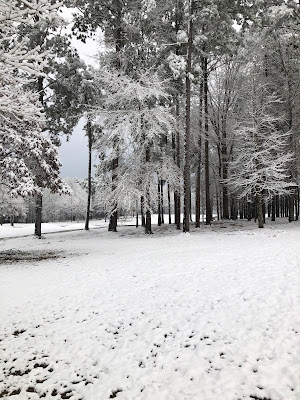 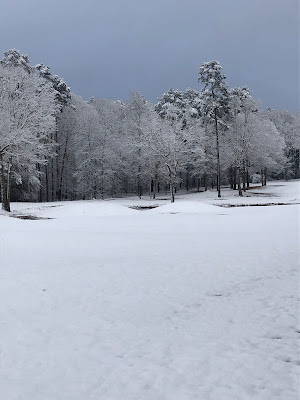 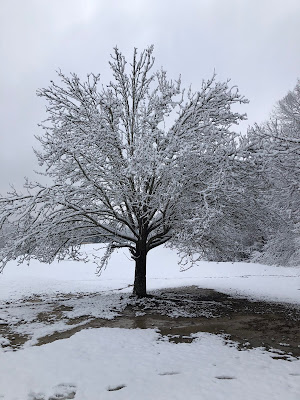 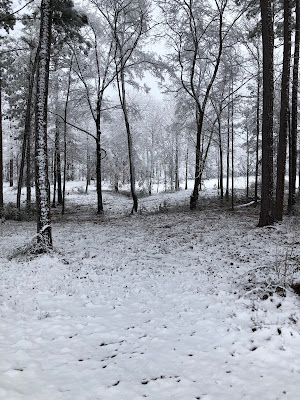 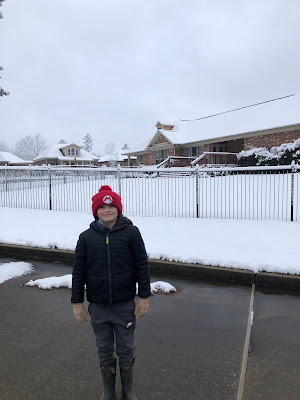 Truly, though, this last year can perhaps best be summed up as God reminding us in a variety of ways that we are not in control. Is this the lesson my kids are learning? I am not sure, but I try to slip in helpful commentary when I can. For example, Reagan has become obsessed with the weather forecast (as has the rest of Louisiana). The last few days she's asked me constantly about how much snow we'll see, if she'll go to school this next week at all, and a variety of other questions I truly cannot answer because, as I've pointed out to her, I am not God. Only God knows.
It's a simple concept, only God knows, yet humans forget it constantly. Look at a field covered in snow, as so many of us are doing or will soon do. Reagan has learned a variety of interesting facts about snow flakes in her science class at school; she shared many of these facts with us in January. I won't relate them all now, but suffice it to say, we serve a mighty God. He is a loving God, a patient God, a jealous God, a God who demands justice, and, yes, He is an artistic God. The creation boasts of her Creator.
We were without power for four days last fall after a hurricane. My kids remember that well. Louisiana residents do not have much experience with winter storms and the damage they can cause, but we know hurricanes. You cannot watch the formation of a storm, any kind of storm, and remain unaware of how powerless humans ultimately are in this universe, this universe we did not create, we do not control, and we will not destroy.
To suggest dimming the sun, as Mr. Klein does in his piece I've linked above, is a sentiment that drips with hubris and assigns to humans the powers of God. Do you know when God did dim the sun? When His Son, Jesus Christ, died on the cross.
Then the sun was darkened, and the veil of the temple was torn in two. And when Jesus had cried out with a loud voice, He said, "Father, into your hands I commit my spirit." Having said this, He breathed His last.
(Luke 23:45-46)
I am not suggesting humans should go out of their way to destroy this planet. I am not suggesting there is nothing at all we can do when faced with a virus that is claiming lives. I am suggesting - no - I am stating with assurance that humans are far more powerless and insignificant than most of us think, and we keep sending people to Congress who read, "Should We Dim the Sun?," and they nod their head as if that is a serious question rather than the laughable musings of a Godless individual.
We are surrounded by lunatics scribbling darkness on the walls of their cell thinking they can dim the sun. Increasingly, lunatics, already possessing a warped sense of their own power and importance, seek positions of authority over others. They use fear to increase their power, playing God with people's lives; many people, forgetting their first faith in an all-powerful God, cower in their homes, thoughtlessly handing over their freedom and their money in exchange for a false sense of relief from whatever the bogeyman of the day is: a virus, climate fears, etc.
I try to surround myself and my kids with people who do not attempt to diminish God's glory, people who freely worship God, people who know their place in this great big universe. My friend Luke Letlow was one such person. I will never understand his death, not this side of Heaven; it has been added to the ever-growing list of things that are irreconcilable with my limited human understanding.
I shall return, reader, the Lord willing, in a few week's time to let you know how this week of potentially record-breaking weather unfolds. Stay safe and warm, friends. Drink hot coffee, read good books, and, if you're an unhappy Louisiana resident right now, know that the heat, humidity, and giant mosquitoes will soon return. For myself, I am not unhappy one bit with this weather. There is a bite in the air that I love very much. It is like a pinch from God reminding me I am alive.
AZ
Posted by AZ