The Loneliness of Memory 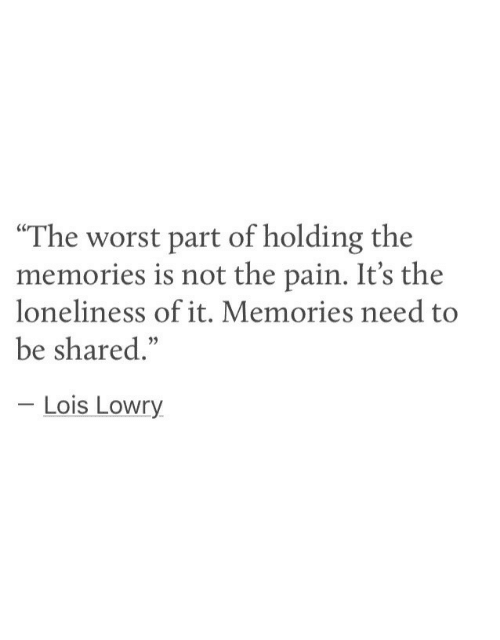 Today is the last Monday in May, & it will be my last blog until July. In last week's blog, which can be found - - - > here, I discuss the slow start to our summer, but we are about to kick it in high gear. We have a variety of things planned during June that will keep me busy & keep me away from my keyboard for a handful of Mondays in June. We're taking the kids on a vacation (they don't know that yet so Shhhhhhhhhh . . . no, we are not taking them to Disney World). We also have our quarterly appointment with the endocrinologist in June. I think there are a few other things on the calendar I am currently forgetting, but the gist is: Anna is going to be busy.

I will miss you, obviously, & I will likely have a slew of photos & amusing tales to share with you in a month's time. I may share some throwbacks during the month of June, though I make no promises. I wrote a lot of things last June after my grandmother died, & I haven't reread any of it since I hit the "Publish" button almost a year ago. I cannot believe nearly a year has passed since her death, & as time allows I plan to reread my thoughts from last June; this is one of the reasons I like blogging, this ability to visit your former self, your former thoughts. If any of those thoughts are worth sharing again, I may do so.

To update you on the thoughts I shared last week, yes, I am still eating Outshine Bars. In fact, Trey took the kids over to his parents' house for a few hours Saturday, & they returned with a large box full of smaller boxes of Outshine Bars. The freezer is packed; my in-laws are awesome.

I have not made much progress on the Sherlock Holmes short stories I am supposed to be reading for May's book club assignment. The book club is slated to meet this Friday, & I have grand plans to get a few more short stories under my belt by that time. Let me tell you what I did read. Late last Thursday night I started reading The Unhoneymooners by Christina Lauren. This was released earlier this month, & I could not put off reading it any longer even though I hadn't yet completed my book club assignment; as I mentioned last week, I am in an undisciplined phase. Anyway, thanks in part to an ill-timed late night cup of coffee, suffice it to say I was still reading early Friday morning when news broke that Prime Minister Theresa May plans to step down effective June 7.

I made a string of bad decisions Thursday night & into Friday morning. Instead of, you know, going to sleep around five in the morning when I quit reading my book I started reading news related to May's resignation. My sleep habits are the pits right now. I hope to rectify this during the month of June while I am on hiatus.

You may recall that in April of this year we had a big family gathering at my Aunt Donna's so all the grandkids could hunt eggs together. That afternoon, as we all ate fried fish, my Papaw proclaimed that Memorial Day is the only holiday we need. He shared a few memories of men he knew who lost their lives in battle.  He expressed his displeasure over the fact that so few people today remember or even know the details of the attack on Pearl Harbor. "They don't really even know when Jesus died," he explained, I assume focusing on this due to the Easter weekend. He doesn't see the point in all the other holidays when we could observe Memorial Day & remember everyone who has died for us. Simple, right? It sounds wonderful to me.

We have been deeply fooled by Hallmark & their co-conspirators, y'all. The constant barrage of holidays & "special days" can be fun (if your idea of fun is spending money on junk you & your kids don't need because society pressures you to do so), but you know, when every day is special, no day is special. I think that's what my Papaw was attempting to say back in April. For too many people today is just another day off work, another day to grill burgers. Too many people don't realize Memorial Day is not designated as a day to honor living veterans. Memorial Day is to honor those who gave their lives in the great hope that by so doing they were securing freedom for generations to come; it actually began as a day to honor the Civil War dead. The idea is to remember those who have made the ultimate sacrifice & to honor their parents & spouses & children who now live without them. The problem with a day like today is that people are not inclined to honor the memory of those whose stories they have never been told; I think, again reflecting on my Papaw's words, that's the root of his deep sadness regarding Pearl Harbor.


My indictment of the flippant approach some have regarding Memorial Day is an indictment of myself. Too often I don't take serious things seriously, & I stress over small things. Consider the time & money & energy that young mothers put into Valentine's Day, Halloween, etc., & compare that to the message we send kids about Memorial Day. It's highly possible we're not sending the right message. Grilling is fine, & relaxing is fine, & going to the pool is fine, but if we do not tell kids the stories of those who died so that they might be free they will associate Memorial Day with nothing more than fun at the pool. Sitting & listening to my Papaw speak, regardless of what he says, is almost always a reminder of this. I've been thinking about his words regarding Memorial Day & the reverence with which he always speaks of those who have died for us, both the solider & of course Jesus Christ, ever since he shared these thoughts in April.

Several decades from now a handful of us will be surrounded by grandchildren & great-grandchildren. We may well feel the loneliness of our memories when surrounded by those who don't share our memories. We may feel compelled to talk about September 11 in the same way my Papaw frequently remembers Pearl Harbor, or the Great Depression, or his friends & relatives who died in WWII & Vietnam. There are very few people alive who share his memories; he often invites those younger than he is to share his memories, & part of the reason he does this, & the reason all older people do this, is to unburden themselves of the loneliness they feel surrounded daily by people who don't share their memories.

Generations are often defined & ideologically shaped by major events that dominate their collective memory. My Papaw's generation is dwindling. There will soon be a day when no one alive has memories of Pearl Harbor or the beaches of Normandy. We should listen to them while they are still here; we should record their stories. We should fret less about all of the nonsense that fills our days & take the time to allow those with memory banks teeming with history to share their memories when they're eager to do so. They are, even if only subconsciously, unburdening themselves of what I imagine must at times be an almost palpable loneliness.

I never mean to depress you, & I hope I have not done so today. I do hope I've encouraged you to think deeply about Memorial Day & to consider why it is the holiday over which we ought to make a fuss while possibly relegating some of the other lesser holidays to the corner.

I am looking forward to June. Henry will turn six, & there's a lot of college baseball left to play (hopefully much of it will include LSU). In my absence, I encourage you to pay attention to the shifting political landscape of Europe & cheer for the Tiger baseball team.