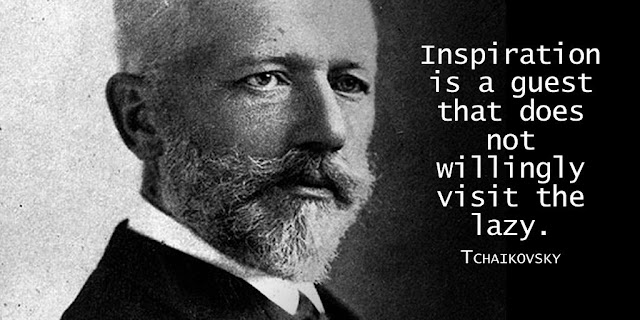 Well, it is officially summer for me & my offspring. All I want to do is watch Forensic Files & eat popsicles. It's true. The lazy bug has bitten me. Hard. Reagan's last official day of school was last Monday, & productivity levels have fallen dramatically for me since that time. Right now we are in what I have decided is our summer grace period. Yes, it's a thing. Shall I continue to eat popsicles & watch Forensic Files so that grace may abound? We shall see.

Before I tell you all about how little we've been doing (& my mental efforts to excuse our slothfulness), I'll share an array of photos of the last few weeks that I've neglected to share because life's been busy . . . & I am getting old & am often tired. I promise you soon I am going to write an entire blog about my heating pad.


Henry's big end-of-the-year event was at Kiroli Park. It was originally scheduled to be held on the same day I was to give my finals at the community college, but forecasted rain that day meant the park event was moved, & so I was able to attend. 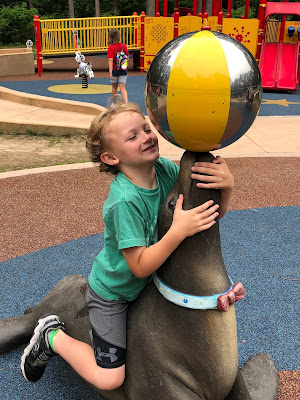 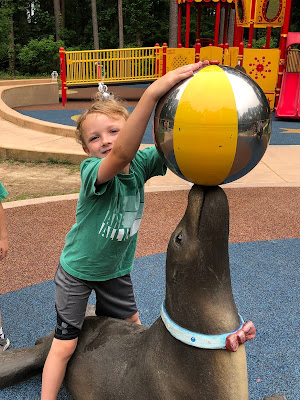 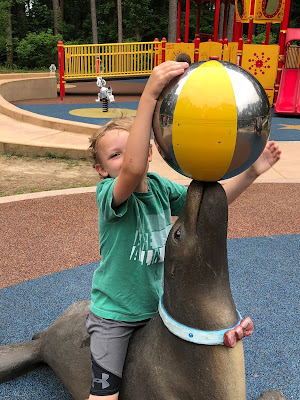 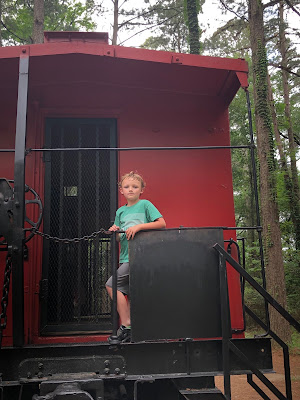 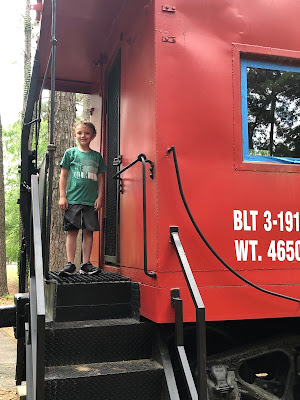 Several of Henry's field trips were called off this past year due to rain, & he missed a field trip to the local Children's Museum before Christmas because he was sick. I was able to join him & his class at the zoo & then again at Kiroli Park. This past year was his last year of Pre-K; he'll be a kindergartner come August, & it is time for him to move on to the big leagues. You longtime blog readers may recall he has a birthday coming up in a few weeks; he'll turn six on June 6.

Many factors contributed to my decision to leave the high school classroom, but thinking back on this last year one of the things for which I am grateful is that I was able to let Henry stay home for a week prior to his Christmas Break because he had the flu. It was a mild case of the flu, & had I been teaching full-time I'd have likely sent him back to school after a day or two because, well, it would've been easier for me. It wouldn't have been the best thing for him, though. I was already on Christmas Break, so the two of us hung out all day together for that week until it was time to go get Reagan from school. That's just one snippet, one thing for which I am grateful, that stands out to me as this school year comes to a close.

Reagan's last day of school was quite eventful. Early last Monday morning she was running some high numbers, & when it was time to wake her up for school she hadn't fallen at all despite me giving her a whole lot of insulin. She went on to school in order to attend the morning's award ceremony. She is pictured here alongside her friend, Elizabeth, holding her certificate for earning all As for the year. She is smiling, but she felt terrible. 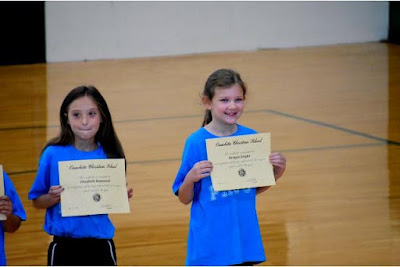 She left the school with me after the awards ceremony. Things went from bad to worse concerning her numbers. I'll spare you the gory details, but there was some vomit involved; she'd been sitting so high for so many hours she was nauseated. On any other day she'd have been happy to just go home & rest, but she wanted so much to make it to Field Day, the culmination of the year for the elementary students. Finally, after about eight hours of persistent high numbers, she started falling right about the time Field Day commenced.

Weather-wise it was a great day for Field Day. All of these pictures were taken by other people who kindly shared them with me. I was wiped. Henry, who was out of school at this point, was my constant companion all day. We just kind of roamed around, tagging along behind Reagan in the event something crazy happened with her numbers. The whole day is kind of a blur, but she finally began feeling better & had a great day, so I claim victory despite the rockiest of starts to the day. 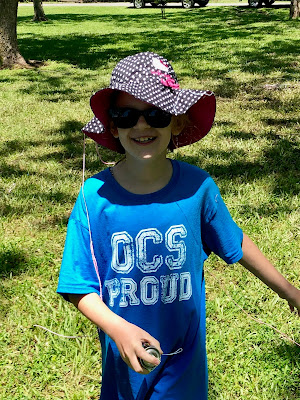 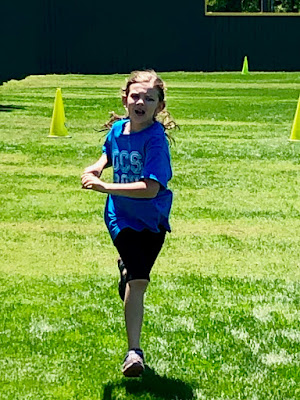 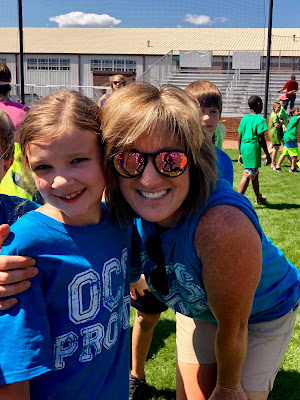 One of the things Henry brought home on his last day of school was this brightly wrapped gift. 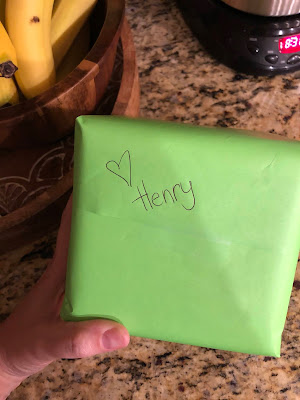 He was vibrating with excitement when he showed it to me on the Thursday before Mother's Day. I told him I'd like to wait & open it on Mother's Day. He was less than thrilled with my decision, but he pretended like he understood . . . & then as he was leaving the room after our discussion he hollered, "IT'S A MUG WITH MY FACE ON IT!" as he ran off.

It is indeed a mug with his face on it. 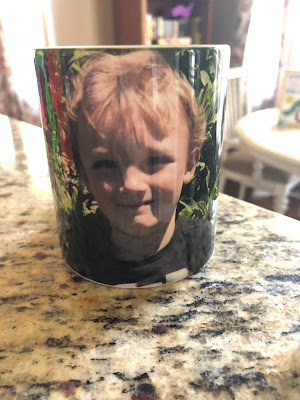 In other news of interest to me & perhaps you, last week it was announced that Sally Thorne's The Hating Game, a book I've mentioned to you a time or two, is making its way to the big screen. You can read more about that - - - > here. As if that wasn't enough Hollywood news for one week, it was also announced that Edward Cullen Robert Pattinson is being considered for the role of Batman. The Internet has a lot of opinions about this. Regardless of whether or not Pattinson ever dons the bat suit, the aftermath of the announcement has been pretty hilarious. 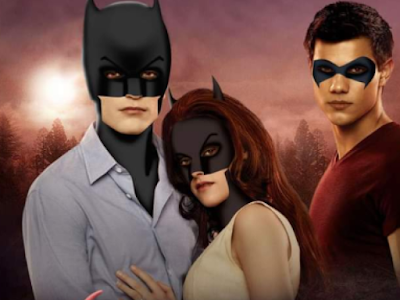 The Internet is a lot of fun sometimes.

So, my laziness. Let's discuss. I have isolated two factors fueling the haze in which I've spent the last week. First is the aforementioned insanity regarding Reagan's numbers on Field Day, which was one week ago today. The following day, our first official day of summer, I was absolutely worthless. I honestly think I needed several days to recover from the intensity of Monday's events. On Tuesday I could tell I must've been incredibly physically tense for much of Monday as I was actually sore in the same way you're sore the day after an intense workout.

The second factor is the general news cycle of this past week, one that has heavily featured stories on abortion. For many months now there has been a push at the state level to make changes to abortion laws. This issue drains me so thoroughly mentally & emotionally that I don't want to spend much time discussing it right now; I may do that at a later time. I attempted to compose something regarding the rash of abortion bills in state legislatures, but it went off the rails quickly. It was about as emotional & ranty as you might imagine. I have been doing some thinking about why it drains me to the extent that it does, & those are thoughts I might attempt to articulate soon. Soon, but not today.


For a couple of weeks now I haven't read much of anything beyond news. What I am supposed to be reading right now is a collection of Sherlock Holmes short stories by Arthur Conan Doyle. That's what the book club is reading this month. I've read one of the twelve short stories. It was kind of dull to tell you the truth, & I've yet to motivate myself to return & read another one. I deeply regret neglecting to suggest we read The Hound of the Baskervilles (by Arthur Conan Doyle) instead of short stories. I had to read that novel in school, & I remember loving it . . . & I cannot recall the details of it, so the mystery would delight me all over again.

Since I am not reading much at the moment, here is what happens at night: Once the kids are asleep & the dogs have finished their business & I've double checked that Reagan's number isn't doing anything crazy, I grab a popsicle & get in bed & mindlessly turn on Forensic Files.

I've been thinking about why it is soothing to me to sit in bed & eat a popsicle & watch Forensic Files. First let me tell you about the popsicles. In the summer I buy the kids Outshine Bars. I can usually turn down a popsicle, but these are so good. They do make "sugar free" Outshine Bars, but here's the deal with that: sugar free means they're sweetened with artificial sweeteners, & I try to keep the kids from ingesting too many artificial sweeteners. The regular popsicles are around fifteen carbs, which is only a few more carbs than are in the sugar free version (yes, sugar free stuff usually still has carbs). There are a variety of flavors, & honestly there's not a bad one. My favorite flavor is probably the grape, though the strawberry & the lime are also excellent. 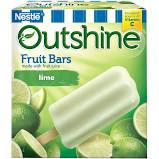 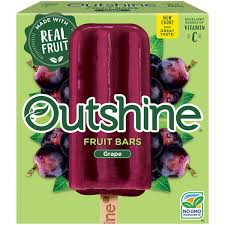 So, with popsicle in hand, I climb in bed & am drawn again & again to the voice of Peter Thomas like a moth to a flame. Thomas, who sadly died in 2016, had an amazing voice. It is hypnotic. I will rewatch episodes of Forensic Files I've seen more than once just to listen to him. I know exactly who did what & why & how much the insurance payout was, but it's strangely relaxing to sit & nibble on my popsicle & listen to Peter tell me the whole sordid story again. When the popsicle is gone I let my wonderful puppy, Maggie, lick the stick. Sophie, my older dog, is almost twelve years old; she never makes it through the first few minutes of a Forensic Files. With Sophie snoring beside us, Maggie & I unwind from the day with our popsicle as Peter Thomas tells us horrifying tales. It occurs to me my current nighttime ritual is not unlike something that would've fascinated Edgar Allan Poe.

I have a handful of summer goals, I do. They are percolating in my mind; maybe I'll share them with you soon. I have decided the summer grace period will be extended until the end of this month. Come June, the kids & I will find a healthful, purposeful summer routine that hopefully involves fewer popsicles & a little less time with Peter Thomas for me. I need to write something noteworthy (as opposed to, you know, blogs like this one). I may attempt something regarding abortion for The Federalist. I need some time to calm down before I do so. In the meantime, I am excited to spend the remainder of the month of May sucking down Outshine Bars & spending quality time with Peter Thomas.

I hope your week is as low key & relaxing as the one I have planned for myself & the children. Even if Forensic Files isn't your thing, I encourage you to try the Outshine Bars. That is my challenge for you today. Have a great week.