Rooted in the Dark Places 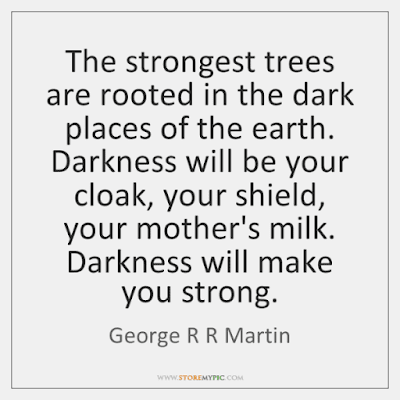 
If you missed my ramblings last week & care to rectify that, you can click here to read last week's post featuring a variety of pictures of the children (including this year's school photos) as well as thoughts inspired by my recent viewing of Twilight, which I saw as part of Cinemark's rerelease of the film to celebrate its ten-year anniversary.

Let's get down to business. As most of you likely know, LSU did not defeat Alabama this past Saturday evening. The upside to the loss is that I personally had a most excellent day in Baton Rouge. I realize this may not be a salve to the wounded people of Tiger Nation, but it brings me a measure of comfort.

Before I share some photos of my day-o-fun in Baton Rouge, I'll update you on Halloween as it happened for the Zeigler children.

Henry, who attended our church trunk-or-treat dressed as a train conductor, was thrilled when his Mario costume arrived in the mail. 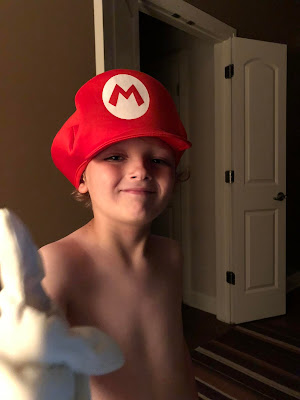 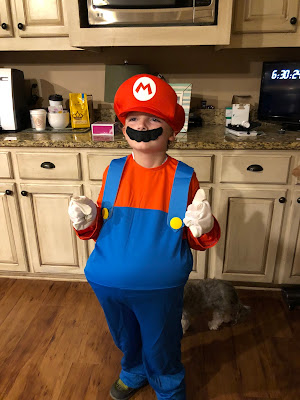 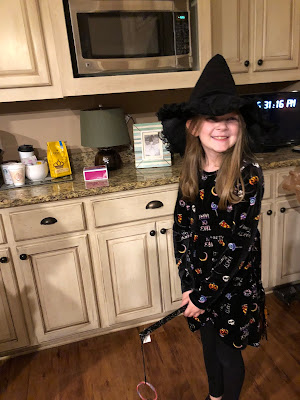 We had a good time walking the neighborhood with the kids on Halloween. Rain was forecasted for that night, but it held off until much later in the evening. The weather was actually quite pleasant during the hour or so we were begging neighbors for candy. 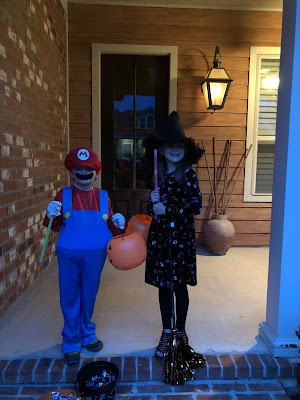 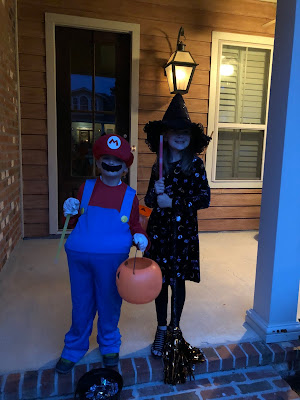 A couple of weeks ago Trey told me he'd heard from a college friend of ours who offered us LSU/Alabama tickets. I told Trey we would be accepting those tickets. I quickly made arrangements for the children.

Trey & I haven't left Reagan overnight since her diagnosis, & so initially my mom & I discussed my parents coming to Baton Rouge with us so they could hang with Reagan while we attended the game. As I suspected might be the case, there were no rooms available in Baton Rouge Saturday night (at least no rooms in which I would step foot).

Plan B was for me & Trey to drive home after the game, & that is what we did. We split the children for the day. Henry spent Saturday & Saturday night with Trey's parents, & Reagan spent the day & the wee hours of Sunday morning with my mom who texted me off & on all day Saturday in our joint effort to keep Reagan's blood sugars in a good range. You've not truly conquered diabetes until you've gathered your thoughts, done a little math, & texted your mom insulin-dosing instructions while 100,000 people holler around you.

Our day was no ordinary day in Tiger Stadium. Our most wonderful friend's stepfather is a friend, shall we say, of the Tiger Athletic Foundation. What this means is that our tickets were tickets to watch the game in a suite in Tiger Stadium. These suites will absolutely ruin you. For example, there is a hairdryer & other toiletries available in the ladies' restroom. They have coffee hot & ready for the moment you decide you cannot look at Nick Saban another minute & you need some hot coffee. Steak, green beans, & mashed potatoes were brought to the suite right before halftime.

I didn't take a lot of pictures inside the suite because I was busy waiting for LSU's offense to do, well, anything. Below are the photos I did take Saturday, including the ones I took on the field prior to the game. While we were standing around eating & laughing prior to the game, we were asked if we wanted to use some of the available field passes to go hang out on the field before the game.

It was a great day. You won't steal my joy, Nick Saban. Remember, Tiger fans, nothing lasts forever; Rome fell, & Saban will, too. 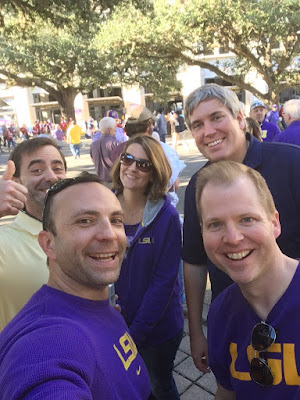 I went from using the bathroom in this trailer (pictured below) labelled Potty Girl to standing feet from Joe Burrow as he warmed up in Tiger Stadium before the No. 3 ranked Tigers took on the No. 1 ranked Crimson Tide. There's a metaphor in there somewhere. 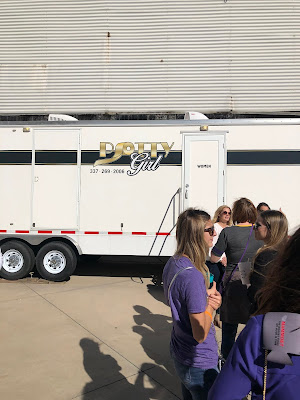 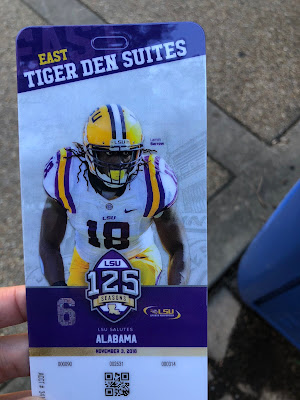 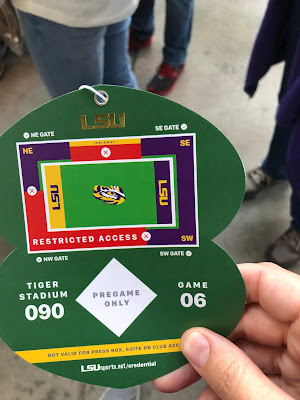 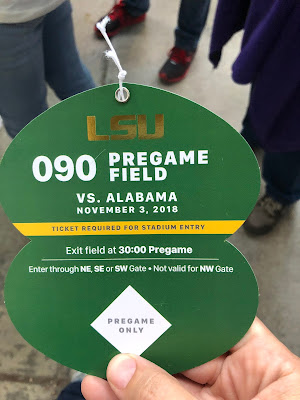 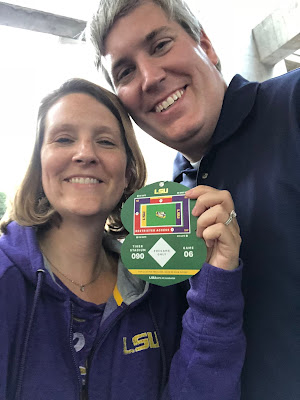 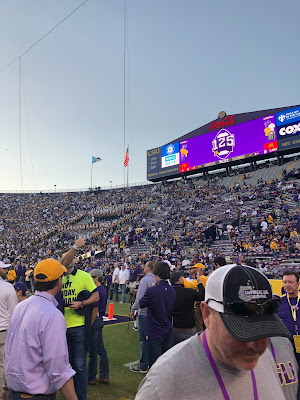 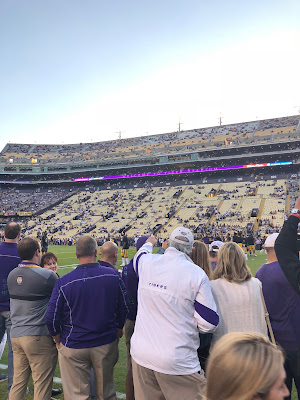 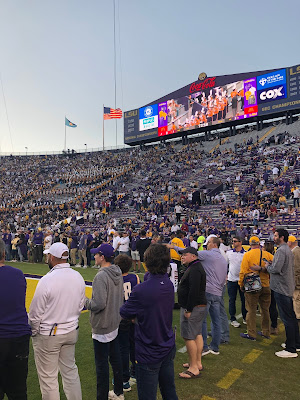 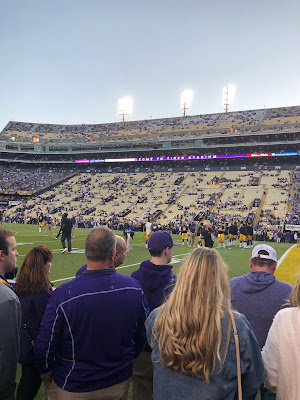 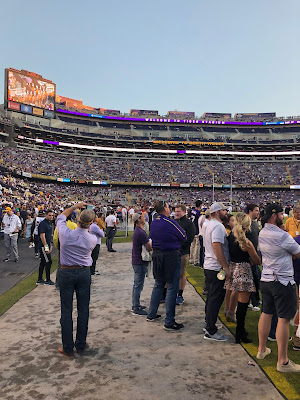 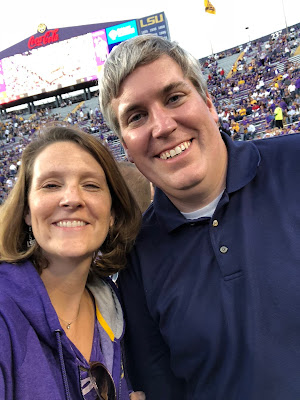 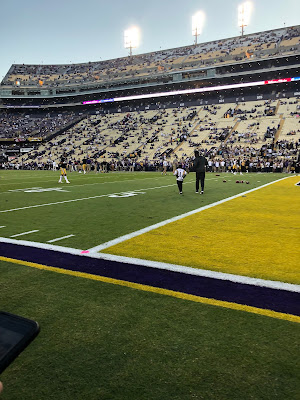 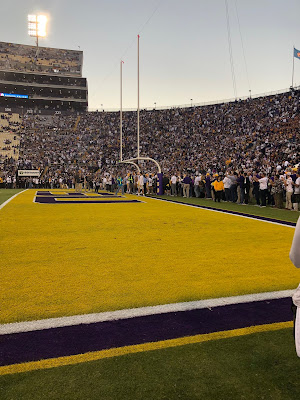 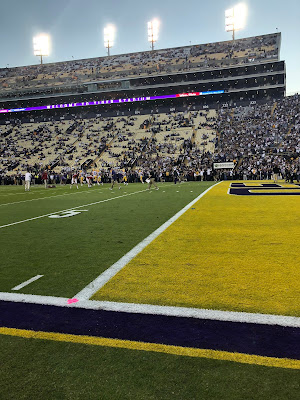 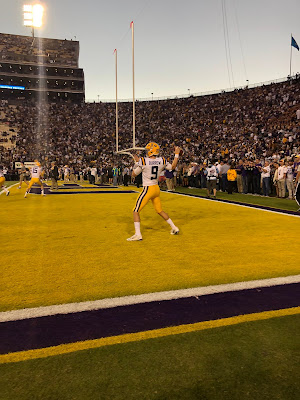 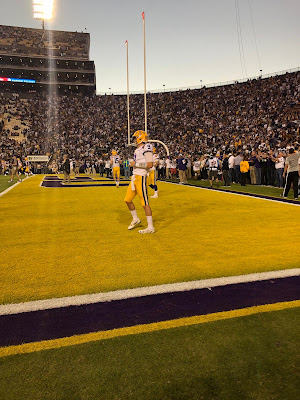 November began with a bang for us, & November storms ahead this week as I have a full calendar staring me in the face. Reagan had a field trip scheduled for today that was canceled due to weather. We all have dentist appointments later today, & Reagan has piano today. Nothing says it's the Monday after LSU again lost to Alabama like three dentist appointments followed by a hurried journey across town to try & make it to piano lessons on time.

Tomorrow is of course Election Day. This means the children won't be in school since their school is a polling location. The kids are set to spend the day at home with my mom while I teach my Tuesday classes & then go vote because I am a responsible citizen. The end of the week will bring Reagan's final soccer game on Saturday morning, a birthday party Sunday afternoon, &, unless the forecast changes, some truly frigid temps about which I am ecstatic. I believe soccer resumes circa March, & I am fine with leaving it behind us while the holiday madness descends.

As you age, this time of year is reframed bit by bit. Instead of making a long list of what you want for Christmas, you begin to think of what to get your kids (& what all you've got to drop off at Goodwill in order to make room for new stuff). Your adult wish list is simple; for example, I just want a new house. You get excited about unboxing your Christmas china. You face your day-to-day adult responsibilities with a little skip in your step because there are already XM radio stations playing Christmas music. Click here for a detailed list of the sixteen SiriusXM holiday stations. I haven't checked them all out yet, so I don't know if they're all already playing Christmas music. I can tell you that XM 70 is already cranking out the holiday tunes.

Because I like lists & there are a handful of things about which you need to be aware to begin fully enjoying this time of year, I'll close with a list of things I think you need to know &/or consider as you begin this first full week of November:

(1) Go to Cracker Barrel soon & buy a handful of their wooden ornaments.

These are inexpensive ornaments that have a rustic look to them. I love them & buy a few of them every year. They always seem to go quickly, so even if you are firmly in Camp Thanksgiving First, these little gems will likely be gone (unless they restock) before Thanksgiving. I'd snap a picture or two of the ones I have to share with you, but they're in the attic in storage right now. While I am not ideologically opposed to Christmas decor in early November, the decor is all in the attic & that's unlikely to change until the kids & I are released from our school-related responsibilities for Thanksgiving Break.

(2) I would further suggest you go to a Cracker Barrel on a Wednesday to purchase the above mentioned ornaments & have a chicken pot-pie for lunch while you are there. Chicken pot-pie is their Wednesday lunch special, & these pot-pies are indeed special.


(3) I mentioned XM stations to consider above, but I will tell you that in addition to the obvious choice for a go-to Christmas album (Michael Buble's), another Christmas album you need is The Carpenter's Christmas Portrait. There is a wonderful variety of songs on that album, & truly Karen Carpenter had one of the purest voices I've ever heard. Maybe next week I'll share more details about which songs on this album sometimes make me weep they're so good.


(4) Some advice: ignore the photos your over-eager, organized friends post on social media other than to offer sincere compliments to your friends who for whatever reason(s) are more organized & peppy than you are. Enjoy the Christmas cards when they start arriving in the mail, but don't give a moment's thought to the fact that you have never & will never send Christmas cards. Unbelievably, Reagan is almost eight, & her Christmases as a child are not innumerable. There is little time to be overly fussy about things if you want to actually enjoy this time of year with your kids.

(5) Don't bemoan the time change; embrace the darkness. I truly don't mind the time change in the fall (losing an hour in the spring is, to me, clearly the more egregious wrong). Yes, it gets dark early for a little while. Make the most of it. Build a fire (or start one with your gas logs & remote as I do), & sit in front of the fire for an hour or two reading. I understand some of you like to leave work & run around outside in the sunshine for hours. You'll be running in the sunshine again soon enough. Those of us who rather enjoy cold, dark nights with glowing fireplaces are excited about the present season, & if you'll allow me I can coach you through it.

If everything were always light & sunshine & roses, we would not truly appreciate the light & the sunshine & the roses.

Sit in the dark for an hour one night & think about the light(s) in your life, both the physical, electrical lights that are little miracles we flip on & off without a second thought as well as the metaphorical lights in your life, other miracles like kids, friends, & family who give meaning & purpose to our days. Darkness serves many purposes. We rest our physical bodies when it's dark, & we usually grow spiritually & emotionally when our lives are plunged into metaphorical darkness. Some of the greatest art & music & literature ever produced was born in darkness.

The early darkness doesn't bother me at all, & I actually love it a little. I know it's not permanent. I know it means the kids & I will be in the house at night & they'll beg me to turn on the fire. I will acquiesce & turn on the fire. The early darkness means soon the kids will have a nice break from school. We will sleep late. When we do leave the house, we'll probably still be in our pajamas. We'll go get some nuggets from Chick-fil-A, drive around listening to Christmas music & scouting houses I want to buy, & we'll end the journey with treats delivered through the window at Starbucks (a latte for me, a cake pop a piece for them).

The strongest trees are rooted in the dark places of the earth. I love that line. A lot of the warm memories your kids will take with them into adulthood — memories of warm fires & big family meals & Christmas trees & sipping hot chocolate in pajamas & driving around marveling at Christmas lights — will take place within a cocoon of winter darkness. Darkness will make you strong.

Don't let the daily descent of early darkness bother you; it is a temporary thing. Fill the seemingly endless darkness with hot chocolate & Michael Buble if you must. I will always trade an extra hour of sunshine for the right to unashamedly play Michael Buble's Christmas album & a legit reason to ride around town in my pajamas listening to my pajama-clad kids bellow Christmas songs. 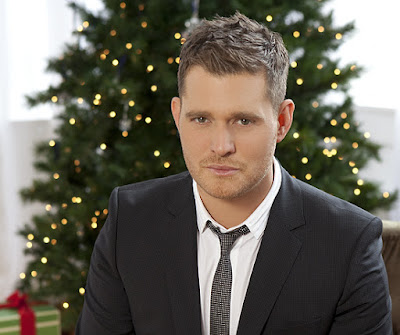