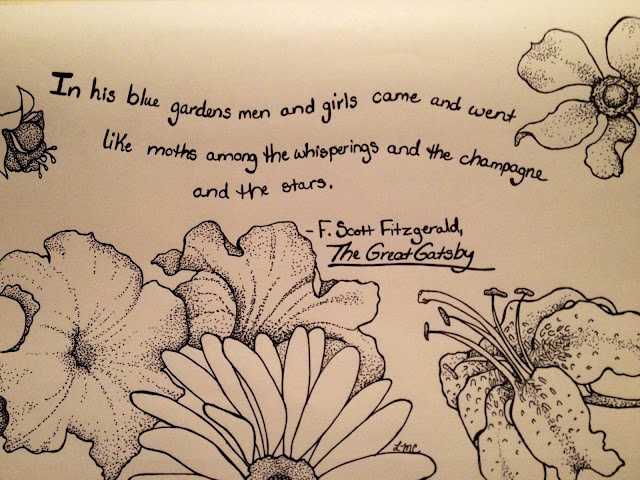 I am, as many of you are aware, very much ON BREAK at the moment.

In the spirit of doing as little as possible, my plan is for this to be brief. Now you're laughing. Maybe I'll surprise you with my laziness brevity.

As I said I would last week, I made an appearance at the school's Jr/Sr Banquet Friday evening. There will be pictures momentarily, but first some words. I don't know if I've ever stated this so bluntly, but I think The Great Gatsby & The Awakening are two of the most aesthetically beautiful American novels. I am not sure if aesthetically is exactly the word for which I'm searching, but we'll run with it for now. They are beautifully written.

In each of these novels, words are strung together in such lovely ways you truly ought to read each novel at least three times, once for the story, once for the deeper meaning (a "literary merit" read), & once to read with your senses, letting the sounds & sights & colors & smells wash through you.

I think the depictions of Gatsby's parties, from the people to the music to the flowing champagne to the night sky that blankets the partygoers, are phenomenal. I know the writing is phenomenal because when I find myself at a wedding reception, a white tent & twinkling lights canopied above me &  exquisitely dressed people twirling around me, their problems temporarily shelved, I think of Gatsby. Friday night, two things ran through my mind on a loop, & those were a variety of lines from The Great Gatsby & also I am so tired.

I'll shut up now & share some of the photos. I begin with this year's Honors English students, the eight AP students followed by (some of) the sixteen who're juniors in Honors III this year.

I really love these AP students. I must love them because this is the second year I've been their English teacher & I still look forward to seeing them every day. When we return from Spring Break we're going to review The Great Gatsby. Last year it was the only book I took the time to review in depth with AP, but I think it is worth it. They read it as sophomores, so they've slept a few times since reading it. It is among the most thematically rich novels they read in their four years in high school English. I had one student earn the coveted five on his AP Lit exam last year, & he used The Great Gatsby to answer the open question. That's all I'm saying. 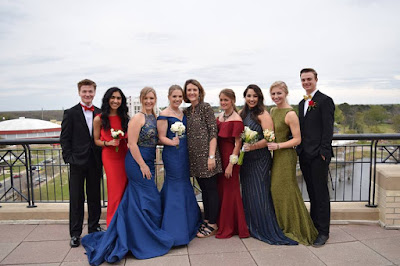 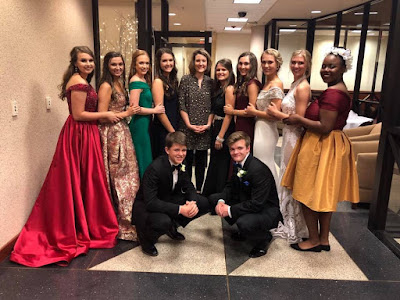 As you can see, I didn't wear a dress. I didn't plan anything at all. I was as tired as I look in these photos. Last week was a long week of adjusting to the new pump & its many quirks & alarms. I was crawling by Friday.

Despite my haggardness, I am sharing the photos in this public way because it was very much a Nick Carraway night for me, I was within and without, simultaneously enchanted and repelled by the inexhaustible variety of life. Essentially, it wasn't my story. The person we know the least about when Gatsby closes is Nick Carraway, our timorous narrator who takes us on Gatsby's journey. 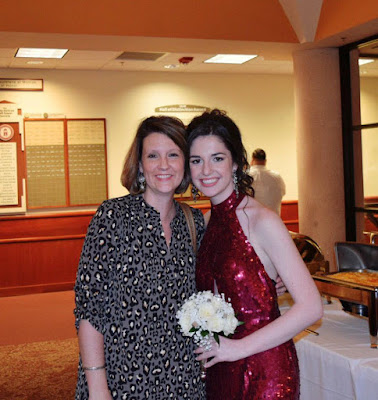 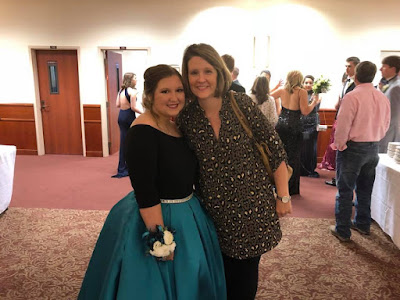 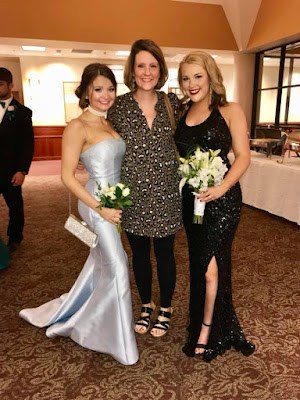 Prior to the dinner, students took a variety of photos I sat & oogled Saturday morning with my coffee.  Here are some of my favorites.

I purposefully found a picture of Catherine in her stunning yellow dress because it screams Daisy Buchanan. 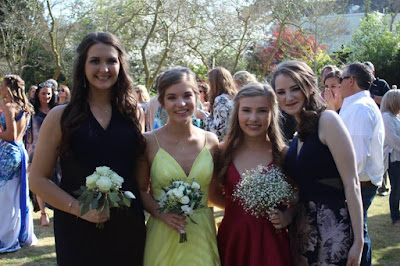 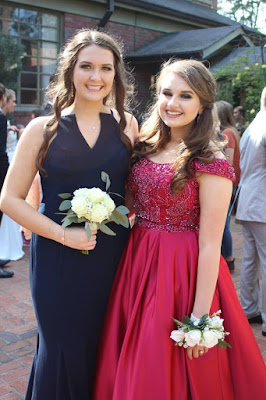 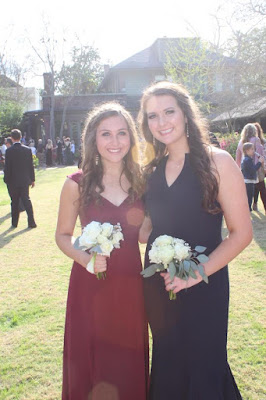 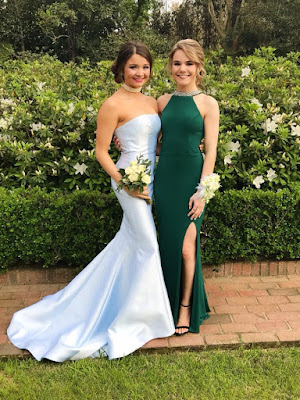 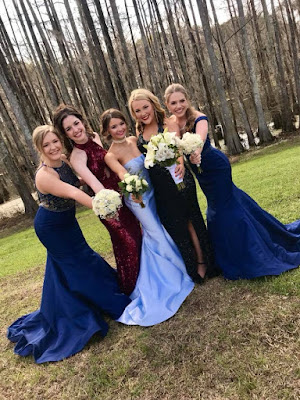 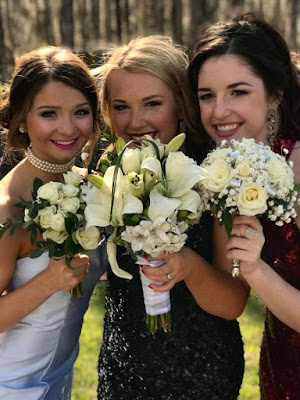 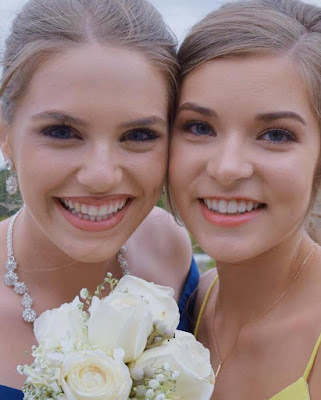 I see these students nearly every day, but they don't look like this. While walking the halls at school or standing at the copy machine I am not overcome by sentimentality. Gatsby quotes do not surface unbidden in my mind as I call roll each morning.

I think I have realized another facet of Fitzgerald's genius as displayed in Gatsby. The novel drips with nostalgia tinged with hope, & this tone is largely set via Gatsby's lavish parties. Despite knowing how it all ends, we readily take the journey with Nick Carraway because we too are enamored with the glitz of Gatsby's world. Everything seems possible, even if only for a short while. Friday night, standing among the finely dressed young people, listening to their mothers recall their younger days, it was almost as if you could touch their past & their future. 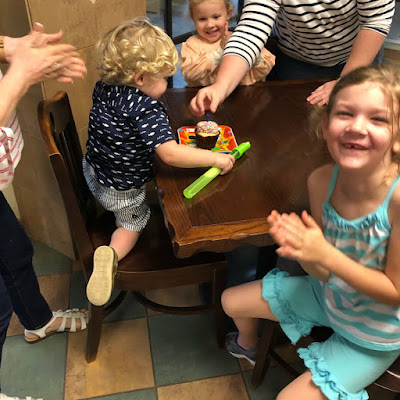 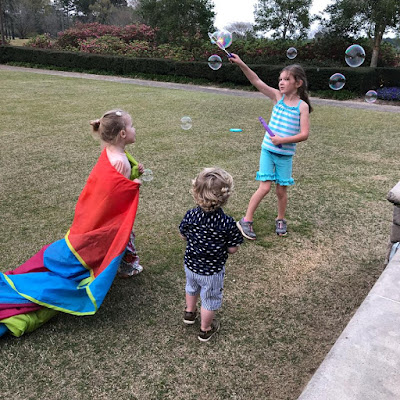 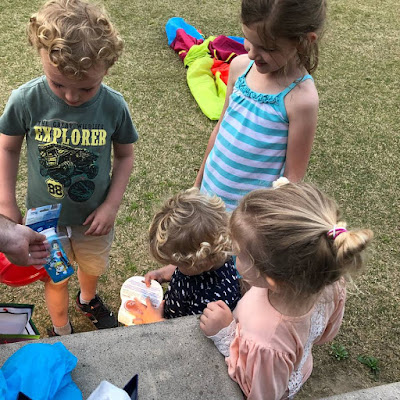 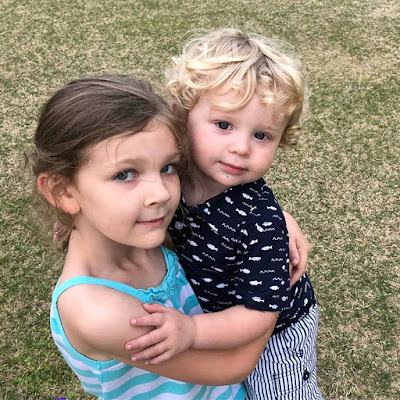 Young Michael isn't the only one with a March birthday. This Friday, March 30, 2018, the blog will turn seven. Sigh. 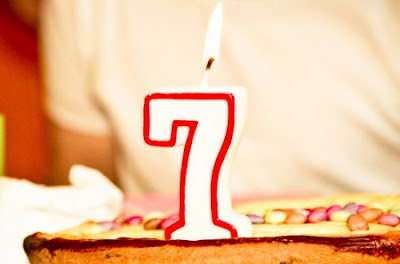 I posted my first blog on March 30, 2011. Reagan was three months old. At that time, she had no brother & no cousins, & she produced her own insulin. She'd finally started sleeping somewhat regularly. I slowly emerged from my months-long sleep deprived state, & one afternoon while she was napping I decided to write. I just wrote blurbs here & there in a Word document. I then realized I'd like to pair some of the blurbs with photos of Reagan, & thus I haphazardly stumbled into blogging . . . & within the year I haphazardly stumbled into writing a novel that is now available for purchase on Amazon. The twenty-nine-year-old Anna who devoted two sleepless, shower-less days of her life to reading the Twilight saga nonstop would be so proud of me. She'd be proud & totally shocked.

I am glad these last seven years are the years represented on the blog. They have been the most consequential years (& the hardest years) of my life. I've continued my quest to intermingle my life with Trey's life. I've had two kids. Trey & I now have two nephews & a niece. I learned how to take care of a small diabetic child. I published a book. I returned to my alma mater to (try to) teach high school English. I joined a book club that is almost as old as this blog. I read the Harry Potter series & Pride and Prejudice for the first time.

I've no idea how long I will continue to blog. I suppose I'll quit either when time demands I quit, or when I run out of things to say. As I think about Michael's second birthday, the blog's seventh birthday, & the ephemeral nature of an evening such as I witnessed Friday night, I am reminded of a handful of quotes that I will now share with you.

Jay Gatsby famously states, "Can't repeat the past? . . . Why of course you can!" You know of course that his attempt to recapture his past with Daisy ends disastrously. Eventually the party ends. People leave Gatsby's blue garden & go home. The make up comes off. The champagne stops flowing. The flowers wither. The magic fades.

To the mamas I talked with Friday night & others struggling as your babies grow up, keep Miss Austen's advice in mind: 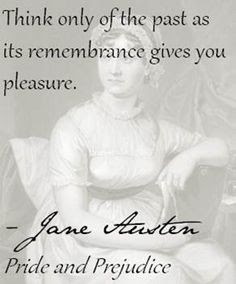 Easier said than done, I know. Gatsby closes with what I think is probably the greatest closing line in literature (yes, better even than the closing line of Nineteen Eighty-Four):

So we beat on, boats against the current, borne back ceaselessly into the past.

This line is a summation of my Papaw's mentality & likely a summation of the mentality of mamas whose babies are about to exchange their lovely formal dresses & tuxes for graduation robes. All I can offer is this: Things may never, likely will never, be exactly the same as they have been for these last seventeen or eighteen years. You can't recapture it, not with anything money can buy. You can remember it fondly, frame photos, & know you did your best. Perhaps most importantly, you can remember Nick Carraway's words: Life begins again when it gets crisp in the fall. They will find their new normal. As a family, you will find your new normal. Life begins again. As someone who thought life was over when my child stopped producing insulin, it is indeed true that Life begins again.

I shall return, the Lord willing, in a week's time to tell you all about how I caught up on laundry & sleep during Spring Break.

Email ThisBlogThis!Share to TwitterShare to FacebookShare to Pinterest
Labels: The Great Gatsby