A child develops best when, like a young plant,
he is left undisturbed in the same soil.
Too much travel, too much variety of impressions,
are not good for the young, and cause them as they grow up
to become incapable of enduring fruitful monotony. 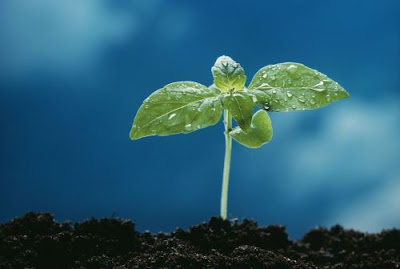 Good morning. I am in high spirits this morning for a variety of reasons about which I will elaborate.

I'm not going to link to last week's blog. If you're determined & industrious you can find it, but I like to think I possess enough self-awareness to say it is not my finest work. I did mention last week that we were heading to Jackson Monday to see the endocrinologist.

Here's the patient making herself at home on the loud, crinkly paper: 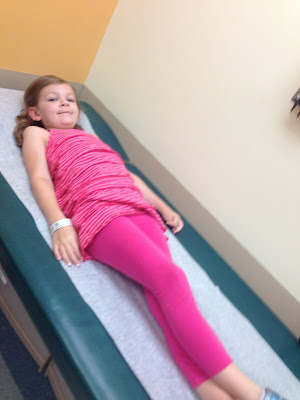 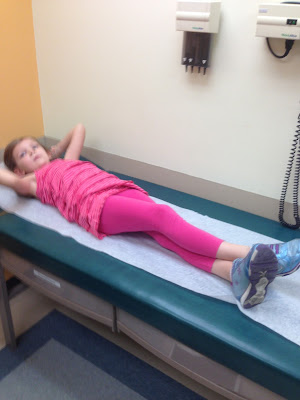 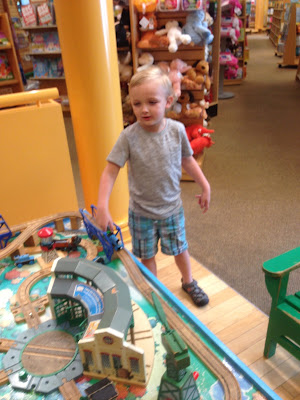 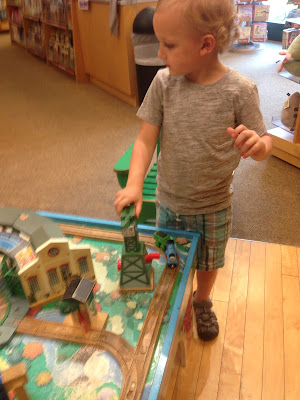 I assume all sophisticated women use the selfie-in-the-mirror method to determine whether or not to buy new clothes. When it's a really tough call, you text the mirror selfie to several people whose opinions you value & wait for them to render a verdict. 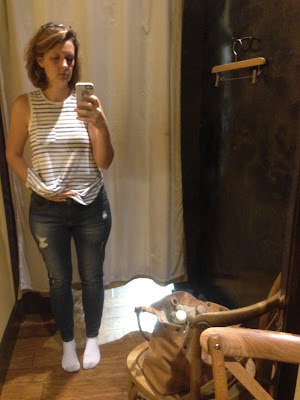 We got home Monday in time to watch Oregon State wipe the floor with LSU's baseball team in Omaha. That was unpleasant (but as you likely know the story doesn't end there). As the week rolled on, things improved, & not just for LSU's baseball team. My physical health slowly returned to me. I felt like exercising again, though I had to contend with the rain & humidity dropped on us by a recent tropical storm (I believe she is officially known as Cindy). The humidity was unreal, even for Louisiana in June.

I call this one, Afternoon walk With Cindy: 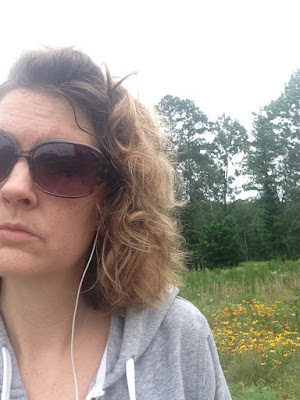 On Tuesday night, Trey & I took the kids to see a recently released animated movie about cars, which I enjoyed more than I thought I would. The four of us ate a ridiculous amount of popcorn & the kids collectively logged approximately twenty trips to the bathroom during the movie. It was quintessential family fun.

I must've had several good nights of sleep toward the end of the week, because Friday & Saturday nights I didn't sleep much, & this didn't seem to bother me. LSU's impressive wins on Wednesday, Friday, & Saturday certainly buoyed my spirit, but I think, in addition to the baseball euphoria, what truly sent my spirt into orbit was the reading & the writing I did Friday & Saturday nights.

Since the end of April when they were released from high school & their schedule disappeared, I've been hearing from a handful of the teens that they are bored. My immediate reaction to this is as follows:

I don't ever know exactly how to respond to claims of boredom, particularly when I hear them from literate individuals who have access to books. I am never - literally never - bored. Every day I drift through the sunlit portion of the day waiting for the moon to rise, the children to sleep, the house to still, so that I might do what these teenagers need to be doing when they are plagued by boredom: read & write. I am vampiric in the summer, eager for the darkness so that I'm free to be my true self.

Friday night I stayed up a little later than I should have. I finished reading the book the book club will discuss tonight, Scarlet, which is the second in a four-book series we're reading during the months of June & July. If you're astute, you just realized I will be attending book club tonight as the LSU baseball team plays in game one of the championship series in Omaha . . . so short of a blood oath, I cannot think of another way to say, via my actions, I love you, book club ladies; I love our time together (I will of course be checking my phone obsessively for score updates).

The astute reader may also be curious as to why we're meeting so often, as tonight will be our second meeting in June. Our fearless leader presented us with the idea of doubling our June & July meetings so as to meet once to discuss each of the four books in the series we're reading. The frequent meetings are working out well for me; I'm staying on track with my reading, & it gets me out of the house to converse with adults more often, which is a legit summertime need for moms of small people.

Anyway, I finished reading Scarlet. It was around midnight when I closed the book, & I was still wide awake. I was not about to do any schoolwork (still gunning for that B). I wrote a little bit. I wrote some dialogue that's been in my head for a month or so. For a variety of reasons (which are all sad), if this book I'm working on unfolds in the way I hope, there will be several scenes in a cemetery. I may actually visit a cemetery at some point.

Often dialogue-heavy scenes take place in ordinary areas like a living room, or an office, or a restaurant. It helps when the setting easily lends itself to the things necessary to add useful, believable body language to the dialogue - chairs, tables, couches, etc. for people to sit on, reach across, sink into, etc. If two people are standing in a cemetery, options are limited. You could say there's a bench, but that's about the only option unless you have them sit down on the ground. Anyway, both the characters in question have a loved one buried in this fictitious cemetery & I'm having fun figuring out what sort of conversation would unfold between two people in a cemetery, two people who're hurting & alone, the protagonist wondering (to herself . . . but it's first person so we know) about rules of etiquette regarding flirting in a cemetery.

After I wrote parts of a cemetery scene, I reread some of my favorite portions of The Bronze Horseman. The book is always on my mind in June because that's when I first read it, & as students of history know, Hilter invaded the USSR on June 22, 1941, & it is on this date that The Bronze Horseman opens.

Saturday night I did something I thought I might regret, but it worked out pretty well. I've been desperate to read something just for me, something that isn't a grad school assignment, isn't a book club book, & isn't a book I need to read so I can teach it during the upcoming school year. For months now I've been hearing buzz about a book titled The Hating Game by Sally Thorne. Essentially it's about two co-workers who've mastered the art of being passive-aggressive snots to each other. Naturally they don't *actually* hate each other in much the same way Lizzie & Mr. Darcy don't truly hate each other . . . but in both cases, there is some genuine dislike initially & it's hilarious & witty stuff, & then of course the best part is the gradual un-hating, which I love so very much.

I downloaded The Hating Game Saturday night. It's not an overly long book, & so I started reading it. I read until around four in the morning. I am not going to gush about the book or highly recommend it because I don't think it's everyone's cup of tea. It's not Jane Austen (nothing is); it does contain some language & a few scenes that would make Elizabeth Bennet blush. It's cute & hilarious in places & reading most of it into the wee hours of Sunday morning was good for my soul.

Let me tell you what's jumped off the page for me this last week. Whether reading Scarlet, or The Bronze Horseman, or The Hating Game, or writing something of my own, or even in real life, what I tend to love most is what is known in layman's terms as downtime. I love downtime, time that is not dedicated to a specific activity, time that is deliciously unclaimed. There are some excellent & thrilling scenes in all three books in The Hunger Games series, but if I had to pick my absolute favorite scenes, none would involve fighting or anyone doing much of anything. Most of my favorites likely would involve Katniss & Peeta talking - in a cave, on the beach, in the ruins of their district.

In fiction, downtime equals scenes that, on the surface, don't thrust the plot forward at ninety miles an hour (but the discerning reader knows they're needed for character development). Often downtime scenes are cut when a novel is adapted for the screen. A casual reader may not even notice these scenes have been axed in the film but usually they mean the world to me. Some novels have little to no downtime (these are never my favorite novels). Some days have little to no downtime (these are never favorite days). You know what happens during downtime, both in life & in fiction? LIFE. Growth. Rest. Relationships. You know what comprises 95% of every Jane Austen novel? Downtime. People talking, dancing, laughing, writing letters, reading, taking walks, etc.

During the action scenes in novels, characters aren't talking meaningfully to each other, & they're not thinking about anything other than surviving, much like I think only of survival when I am at the grocery store with both kids, or I'm trying to get us all dressed & out the door in time for Bible class on Sunday morning. As you recall, I loved my first year teaching high school, but I truly despised how little downtime I had - for myself or for my family. Most of us are over-scheduled fools. Read that Bertrand Russell quote again - -

A child develops best when, like a young plant, he is left undisturbed in the same soil. Too much travel, too much variety of impressions, are not good for the young, and cause them as they grow up to become incapable of enduring fruitful monotony.

Kids who're entertained constantly, who're in front of a screen every moment they're not at a scheduled event - a birthday party, a playdate, dance practice, a ballgame, ball practice, vacation No. 5 - will often claim they're bored the moment nothing & no one is thrust in their face because they've never had unscheduled time on their hands to learn how to use it fruitfully. Don't tell me you're bored because I will give you laundry to fold or a book series to read.

I am lacking in so many ways, but after thirty some-odd years, I never utter the word bored. I know exactly what I want to do with time when time presents himself, which, in this phase of my life, he rarely does. Time doesn't come to me often now, & so when I am determined to fill time as I please, I steal some at three & four in the morning even if it means I might have to pay a heavy price for thievery the following day.

Clear your calendar when you can. Be alone. Truly, one of the greatest gifts you can give yourself is to enjoy your own company. Think deep thoughts. Read. Write. Pray. Spend time - downtime - with people you love. We all need some time in a cave with the people we love. I could continue on here with an odd metaphor about how life is like The Hunger Games, but I won't. So many people live for the action scenes, but the good dialogue, the stuff of life, often takes place in the lulls between the action.