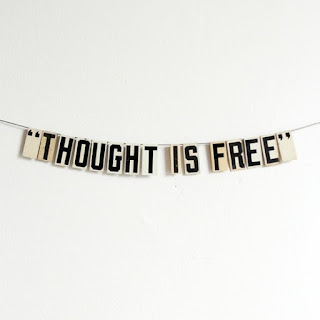 Good morning. I really should say hi & bye because I am still editing. I mean, not constantly, but in every spare moment I can find.  I'll attempt to say some interesting things quickly & then I have to jet.

Last week was one for the books (or the blog, I suppose). Tuesday I rose at five in the morning for the first time this year & it was punishing to do so. Flash forward several hours & I had about twenty ounces of coffee in me & had received several warm hugs & things were looking up. I handed out copies of The Screwtape Letters to all the seniors. We talked a little bit about English 102, for which most of them will receive credit this semester while simultaneously earning the final high school English credit they need to graduate in May. It's likely a few other things happened that I'm forgetting, but we'll return to Tuesday soon because that afternoon I had a conversation with a student that inspired today's blog.

The week unfolded in a manic, emotional way for me, & not only, as you might assume, because of my editing deadline that looms large. The seniors have now reached the point in their final year of high school at which they're granted early release. What this means is that after their fifth period class, which ends around 12:40 in the afternoon, they're free as birds. They can leave campus, go eat lunch where they please, go home & nap, go to the mall, etc. You get the idea. That's what it means for them. What it means for me is two-fold. First, they all vanish from campus leaving me to mill about the halls & cafeteria searching for familiar, friendly faces. There's now a whole section of the cafeteria that used to be filled with life & laughter; it's now empty & sad, a visual dagger in my heart. A few days last week I walked in the cafeteria, took one look at the empty corner, & took my salad back to my room so I could read Dark Places while I ate.

The upside of early release is that my eighth hour, all-senior, all-loud, crazy-making study hall is a thing of the past. I can't say I mind this development.

On Tuesday I spent most of eighth hour talking to a former member of the aforementioned study hall who was still on campus for some reason I now cannot recall. During the course of our conversation, he asked me what I enjoy(ed) about writing a book. I had no idea how to answer his question. I proceeded to give him a long & convoluted answer. I thought about his question for the next few days, & I think I have a better answer now. As I told him last Tuesday, I don't do well under pressure, nor do I express myself well orally, at least not when compared to the clarity I can usually (eventually) achieve in writing (it's so random & ironic that I taught Public Speaking for so many years). I need to think about something for a few days, & then sit down & write, & then, if the stars align, I can sort through my feelings & assemble a lovely answer. Don't pressure me or I'll never answer your question while still managing to tell you my life story.


Freedom & control. That's why I like to write. See how nice & succinct that is? I am even psychologically aware enough to pinpoint the when & why  I began writing fiction.

As is the case with most new mothers, when I brought Reagan home from the hospital I was awash in emotions. Since we're now six years removed from that time & I think it is well established that I love her, I will admit I wrestled mightily with feeling I had lost my freedom, & I had lost, well, control.

I don't think anything in the world - no book, no video, no babysitting job, no classroom experience - can prepare you for bringing a newborn home from the hospital. I recognize that my experience with Reagan was not identical to other new mothers' experiences so for those mothers who found that time in your life lovely & restful, kudos to you. Reagan was not an enthusiastic nurser, but I kept at it, which meant, among other things, that I slept very little because I'd bottle feed her pumped milk, hope she went back to sleep, & then pump breastmilk. On the nights she ate every two to three hours you can do the math & then recoil in horror at my sleep schedule. I was an emotional zombie. I cried all the time, certain I'd never again leave my house, wear make-up, sleep through the night, read a book, or enjoy any of the things I enjoyed prior to giving birth, like shopping, being alone, thinking clearly, & not crying all the time.

At some point, I started writing. I started a blog. It was - & remains - an excellent way for me to sort through things, be it my feelings about motherhood, about what I'm reading, about people & ideas I find infuriating, etc. The blog was something I created & could control, unlike my child, whom I created & birthed but, at that time, over whom I had zero control. I could not even control when & if I slept; my need to exert control was overwhelming, & it spread from the blog to the creation of an entirely fictional world where every decision was mine.

Not only did I have complete control over every detail of what I was writing, it was an escape for me, a place to which I could flee while never leaving the couch. I never imagined it would balloon into an entire book, a book I am editing now as six-year-old Reagan plays in the next room. So as not to leave you in suspense, she did begin nursing when she was one month old, & she now sleeps through the night.

I hope your year is off to a good start. My self-knowledge is growing by leaps & bounds thus far this year. For example, I've learned I write pages of well-paced dialogue that is mostly bereft of body language. You know what's hard? Writing a scene one year & then, a year or so later, attempting to sprinkle the scene with appropriate, engaging body language.

The body language edits are difficult for me. I am to the point where I've considered having students act out scenes for me while I take note of their body language - Are they sitting or standing? Where are his hands? Is she smiling/scowling/teary-eyed? - so I can write appropriate, realistic body language. It's hilarious that I'm struggling with this, & that I largely neglected it during the initial writing, because when I read, I am a body language hawk. I will reread scenes just to make sure I understand who is where doing what with their hands / arms / eyes / mouth. Ursula is right, y'all. She is absolutely right.

The internal dialogue edits are coming along nicely. Don't brag in such a public way. It's unbecoming & she may hate the changes you've made. Repeatedly my editor made note of a sentence that begins, "Edie thought," or "Edie knew." For the first fifteen or so chapters she left me kind notes suggesting I consider inserting Edie's actual thoughts. In the latter half of the novel, there's a subtle shift in the edit notes . . . PLEASE LET US HEAR HER THOUGHTS INSTEAD OF TELLING US ABOUT HER THOUGHTS! PLEASE!!.

So, I am tapping into Edie's head again & it is as fun as I remember. I've also written a few new scenes that I hope have a permanent place in the manuscript. We shall see. As I'm sure you recall from this year's inaugural post my deadline to submit the edited document is in one week. As luck would have it, school is out next Monday so if it comes down to it, I can burn the midnight oil into the wee hours of Monday morning.

Despite drastic changes in the economy since Shakespeare's time, thought is, as he asserted, still free. Writing is free. Many of the perspective-altering, life-changing things are free: thinking, writing, praying, smiling, adjusting your attitude, & yes, sleeping. Writing was a lifeboat for me at a time when I was floundering. So, dear inquisitive student, there's your answer. Thanks for asking. No, seriously. In the middle of this editing fog, when I often vow to never, ever think about writing another book, it has been good for me to remember why I wrote a book.