The play's the thing
wherein I'll catch
the conscience of the king. 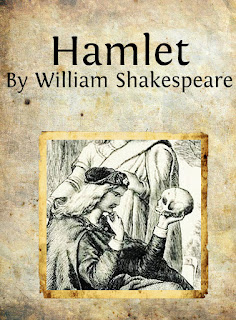 I almost did a terrible thing. One night last week, I was on what Trey would term a tear. Now that several days have passed & I've had a little bit of sleep, I can't remember with clarity what set me off. I do have some idea of what was bothering me because I shut myself in my bedroom & began hammering out a blog, a blog I originally titled, Tired. A thought provoking piece, it was basically a ranty list of things of which I am tired. Had I not had a pleasant weekend, & were the children & I not on Thanksgiving Break this week, it's highly likely I'd have sustained my anger & decided it was a good idea to hit the Publish button on Tired.

Below, an excerpt from Tired:


I live in a house with three people & one dog.

I am tired of being the only person in the house who knows when we need more toilet paper, or more paper towels, or more milk, or more insulin.

I am tired of being the only person in the house who knows when the dog needs shots.

I am tired of being the only person in the house who knows where everyone's socks are.

I am tired of being the only person in the house who is expected to immediately rise when others are thirsty.

I am tired of being the only person in the house who knows when the field trip shirts need to be worn to school.

I am tired of being the only person in the house who washes the field trip shirts.

I am tired of being the first person to rise every day.

I am tired of always hurrying.

I am tired of always being late.

I am tired of being tired.


You get the idea.

Yesterday afternoon I sat down & read Tired. I decided maybe it wasn't the best way to kick off the week of Thanksgiving, but otherwise had no inspirational thoughts to share. I considered posting a giant picture of a turkey & a brief Thanksgiving message for you wonderful readers & calling it a day. Unsure of exactly what direction this week's blog would take, I turned to my school work because, yes, I have a good bit of work I need to get done this week while "on break." And oh! Oh wait. Now I remember. Now I remember what originally inspired Tired . . .

One night last week Trey asked me if I'd be home Friday morning. Last week was a four-day school week for me & the kids as our Thanksgiving Break officially began Friday due to Grandparent's Day, a day on which the young people at school strut their stuff before a live audience while junior high & high school students sleep late. Reagan will participate in the Grandparent's Day merriment beginning next year. Anyway, while I was tempted to lie, I answered Trey in the affirmative & said that yes, yes I would be home Friday morning. He then proceeded to inform me about the maintenance folks he'd scheduled to come to the house early Friday morning since it was my day off. Somewhere during the phrase since it was my day off I lost it. Lost. it.

I am not sure of what exactly I said. I believe I began with some hollering about not getting out of the bed & not putting on a bra. I'm pretty certain there was a tirade about the concept of a "day off," which, for me, means I am not physically required to be at school, but instead am at home - with two small children & a needy dog - continually, as always, attempting to prepare myself for what's ahead in the classroom while caring for small children, one of whom doesn't produce any insulin. In fact, it is only because I am preparing to teach Hamlet that you are not reading Tired (or staring at a picture of a turkey) but rather are reading this blog, a convoluted explanation of & expansion of Tired. In much the same way Hamlet attempts to pierce his uncle's conscience with a play (within the play), I am blogging about a blog. You see what I did there?

Interestingly, or perhaps not, I am also preparing to teach Chopin's The Awakening. Between  my frustrations as expressed in Tired & Kate Chopin whispering in my ear, it was really Divine intervention that yesterday I spent some serious time with the Prince of Denmark. He not only lured me away from Tired & The Awakening, he inspired me to return to Tired &, rather than delete it & replace it with a terse, insincere, & uninspiring Thanksgiving message, learn from it. Build on it. You get the picture.

I am intellectually aware of the many ways I am blessed, but when I am exhausted, there is a wall that goes up between the rational, intellectual portion of my brain & the emotional, overwrought mom whose one desire in the world is to pee alone. To read ONE CHAPTER alone & in peace. It's becoming increasingly difficult for me to, well, tear down that wall. Intellectually I am aware that this issue of craving aloneness has become amplified over the past few months because I've lost the hours post-bedtime, the children's bedtime, that is. I don't have the energy to do one thing after they're asleep at night. I usually can't read a paragraph before I fall asleep. If I am able to stay awake, I have school work that's begging to be done.

In losing those hours, that time that has been so precious to me since becoming a mom, I'm going to borrow a sentiment from Edna (of The Awakening fame) & say that I'm losing a little bit of myself. I need to be alone with my thoughts, with a book, with my writing at least once in a while, & while it's true I am physically tired, there's another weariness plaguing me lately that is unrelated to physical needs.

This is not some ill-disguised cry for help; I am not going to do anything crazy. I am too structured to allow such nonsense. I just want to say it, to put it out there because even though nothing will change regarding my maddening schedule & the demands on my time, at least not until May, I feel better for having said it. It's better this way, too, because otherwise I'd likely end up ugly-crying in front of my AP students in a week's time when we commence with our study of Chopin & The Awakening.

I suppose I'll end with this thought. Let people own their feelings. I know there are likely a handful (perhaps more than a handful) of people reading who're thinking terrible thoughts about me. You'll probably keep those thoughts to yourself, but you're thinking them (but at least you can't fault me for not being honest). No, my feelings in no way change or negate my reality or my responsibilities, but you don't walk in my shoes, you don't sit & chat with me at three in the morning while I wait for blood sugar to rise, you don't walk away from my three-year-old son five mornings a week wondering if it was a good decision to put him in school so young, so just let me have a little emotional wiggle room.

One of the things I've learned as I've aged, & most certainly since I've become a mom, is that people are cut from different cloths, & thus their reactions to, well, life - motherhood, stress, etc. - are going to be varied. I watch other mothers sometimes & I feel so rotten about the job I'm doing as a mother I want to crawl in a hole (because I feel guilty, & yeah, because it'd be nice to sit in hole by myself). I hate crafts. I hate making things with my hands. I get up before five in the morning & attempt to teach literature many adults won't touch with a ten-foot-pole & most days I'd rather scratch my eyes out than decorate something with glue & glitter. Yes, my child's turkey was the saddest, lamest looking turkey hanging on the wall outside her classroom. I let her do exactly what she wanted to it, which was color it with crayons. No glue. No glitter. No feathers. No buttons. No nothing. She was happy; I was happy. But I still cried when I passed the other, considerably fancier turkeys on the wall, hoping she wouldn't care or feel embarrassed about hers.

Next week I'll tell you all about how I ate an entire bag of chocolate chips on the way home from the grocery store & how lately my main motivation for taking the kids to their Bible classes at church is the time it affords me to sit in my car by myself & revel in the silence while I drink my coffee. True story.

Here they are yesterday morning before leaving with Trey for Bible class. And yes, I did make it to church, but, despite rising before everyone else, I wasn't ready in time to attend Bible class for reasons you can likely guess. 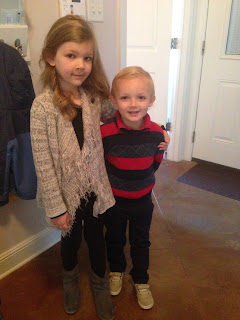 I'm struggling. I am happy, really I am, but a couple of seconds during the day to reflect on that would be helpful. The daily grind is, well, grinding. When coupled with the various illnesses the children continually are exposed to at school & the constant, constant, constant strain of diabetes, I need a break. I do realize I am technically on a break, but thus far it's consisted of Hamlet, The Awakening, a couple of rough drafts students asked me to review, & laundry. And diabetes. And dishes.

I suppose I have indeed done a terrible thing &, rather than leave you with a heartfelt Thanksgiving message, I've dumped my issues in your lap. Perhaps the remainder of break will go swimmingly & I'll accomplish considerably more than I expect & tell you all about it in a week's time. Here's hoping.