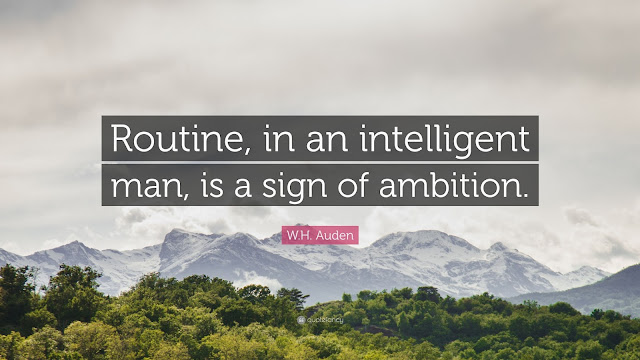 Again I sit to write with tired eyes & a full heart . . . & perhaps lingering effects of the task of teaching Pride and Prejudice & other literature in which there is no dearth of highbrow language.

Last week was without question the most structured week I've experienced since, well, perhaps the last time it was my daily routine to rise & dress & drive to school five days a week. It was the most structured week either of my children have experienced ever. I have not, until this moment, shared this with you, reader, but I was beyond leery about my ability & the ability of my offspring to make the giant leap we made last week. I fully anticipated at least one of us dropping from the sky mid-leap & landing in a pile of tangled limbs, bloodied & bruised.

I've done the early mornings before, mind you, but never before have I done them with two dependents who're slow to rise, slow to urinate, slow to brush teeth, slow to dress, & slow to shuffle toward the car. I tell you, this is the closest I'll ever come to being in the military. I rise very early, shower & dress, make two lunches (mentally noting the carbohydrates in one for later use), slip the lunch boxes in the children's respective backpacks, haul everything to the car, & return to the kitchen to fill my thirty ounce Yeti with coffee. I briefly pause to inhale the coffee fumes, & then sip coffee while I force feed myself yogurt at six thirty in the morning, after which the children are roused.

Thus far, the routine is working for us. The one glitch is the yogurt-at-six-thirty-in-the-morning part. There's been some gagging. I need to be conscious for at least an hour & have at least eight ounces of coffee in me before I can even think about food, however it's also a bad idea to teach for four hours straight fueled only by coffee. Friday morning I decided to throw the yogurt in my purse & eat it later in the day.

Admittedly my mornings are pretty full, but, assuming the classroom-door-drop-off goes smoothly with both kids & I don't start gabbing with someone on the way back to my classroom, I have about ten minutes to sit at my desk, sip coffee, check email, gird my mind for the day, &, yes, eat the yogurt. Those ten minutes are, I believe, the most important of the day. I just need to sit at my desk, & sip my coffee, & make sure there are no urgent emails to attend to, & not talk to anyone for ten minutes, & then I can rise & be human. There are a few eager beaver students who come on in the room before the first bell rings, & that is perfectly fine, so long as they learn the lesson Trey has, which is to give me those precious minutes alone with my coffee before approaching me.

I won't go into the details of every moment of the day, but suffice it to say, the kids & I are figuring it out, including Reagan's insulin delivery for both lunch & snack. We're finding grooves & digging in & settling ourselves for a great year.

Here we are, only a few days in & yet fully routinized: 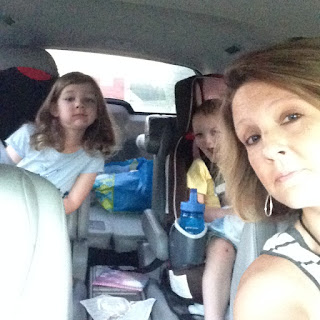 And here they are in their Friday spirit shirts: 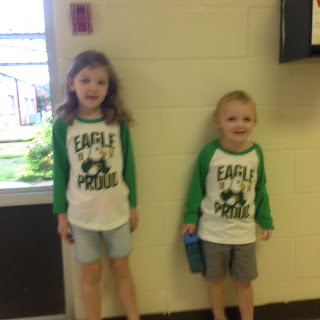 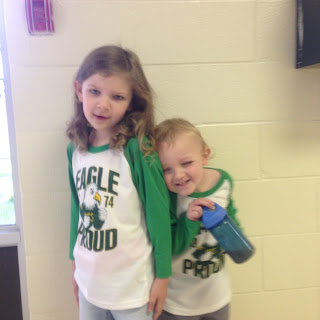 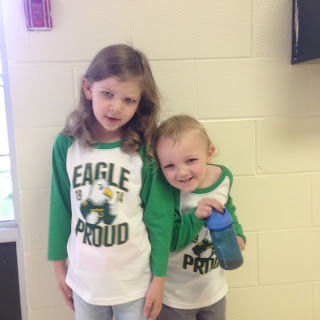 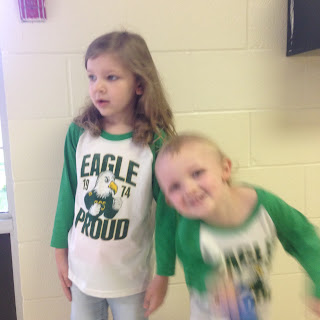 And, because I want these on the permanent record, here's Henry last Monday morning, his first day of school: 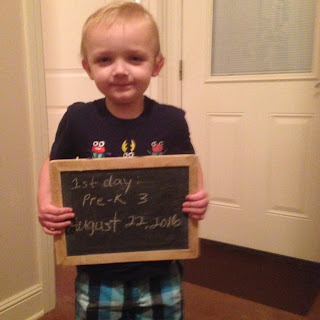 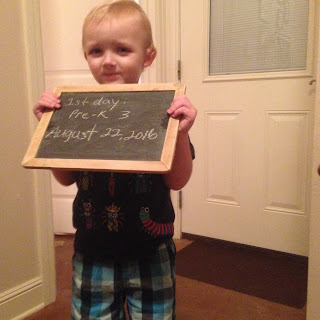 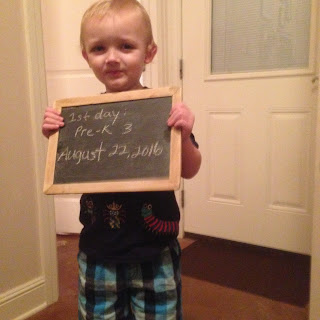 It's important to me that my other kids & I, the sixty or so high school seniors who're endearing themselves to me, find grooves as well. I am not teaching them psychology, & they may not yet consciously know they desire a routine, but they do. Sure, spontaneity is great, & there will be days when I chuck the plans & we have heart to heart talks about, oh, politics or life or whatever, but for my sake as well as theirs, we need a routine.

I haven't worked it all out yet, but we're all being patient with one another & thus far, things are going, well, pretty fabulously. For example, Friday they wrote in their journals. They know this drill as they've been writing in their journals since they were ninth graders. As you might imagine, it fills them with glee. One day soon I want to share with them some of the research on the importance of writing things longhand (says the English teacher as she types away). I may force them to write a few letters longhand, & likely at that time we'll discuss how technology has changed everything, including fiction, at which point I'll share with them some of the letters in novels like Pride and Prejudice.

I may tell you a different story in a week or a month, but these young men & women are, dare I say, restoring my faith in America's youth. Am I overselling them? Are we honeymooning? Maybe. Maybe next week we'll be yelling at each other about taking out the trash. Time will tell.

There have been a few alarming moments. They don't know who Colin Firth is, for instance. Last week I was asked if we had CDs in 1998. Yeah. Personally I think a few laps around the skating rink with Ice Ice Baby playing in the background would topple the barriers that remain between us.


I am swollen with pride for my babies, the two I birthed, & already filled with immense hope for the futures of these teens with whom I am privileged to spend a handful of hours each week. My challenge to you, seniors, if you're reading (but if you are maybe you ought to get off the Internet & study for your Lord of the Flies test) is to do all that is within your power to keep me smiling & singing your praises, to give me a reason to, as I already anticipate, be unable to abate my tears in May when you drape yourself in that flowing green robe & walk out of my life. Whatever you think of me now, just wait until I'm emotional & insist on hugs.

A final note before I go. There's something on my heart & I can't sign off without sharing it with you, & asking something of you. At some point in the last two decades my family & I fell into a wonderfully comfortable routine of meandering into the church building at the appointed times, saying a few hellos, & taking a seat in our familiar pew. The pew wasn't difficult to locate, for seated in the pew behind ours has been a man named George. For the last two weeks, George hasn't been occupying his pew; he is in the ICU after breathing difficulties sent him to the hospital, where it was discovered he'd suffered a couple of heart attacks. In the morning, George's sons will meet with doctors to discuss an operation that will commence at some point tomorrow, an operation that is risky but necessary for George.

I love George. I love his family. These are people I'd likely love even if the Lord didn't command it. George has raised two fine sons, grown men who readily admit they love (that's a present tense verb there, love) Saved by the Bell. George has four grandchildren who adore him & two daughters-in-law who're juggling the demands of their jobs & their teenagers while spending as much time as possible with their beloved father-in-law. I miss George. I miss the sight of Henry & George high-fiving. I miss the familiar sound of him unwrapping his peppermint in church. Please pray for George, & for his family. Whatever is ahead for George, there will be loved ones waiting to greet him with open arms, of this I am certain, but if it's God's will, I'd prefer another couple of decades of George warming his pew.

Sometimes you don't notice your routines, routines you fall into thoughtlessly at times, until they're shaken up, & instead of a warm smile & a crackling peppermint wrapper, there's a void, & something inside you aches. The Zeiglers love you, Mr. George, & we are in fervent prayer for you.