The right time
is any time
that one is still so lucky as to have.

More than once this summer, on the occasions that Trey has been out of town overnight, Henry's spent the night with one set of grandparents while Reagan & I had a girls' night.  Reagan pleads for more of these evenings because she gets to choose a place to eat dinner & then stay up way too late watching TV before falling asleep in the big bed.

We had our final girls' night of the summer last Wednesday evening, Trey having travelled to Baton Rouge to interview hopeful young lawyers.  Reagan & I dropped Henry off at his grandparents' house & I headed to Chick-fil-A, having promised Reagan dinner & ample time at the indoor playground.  To my utter astonishment, Reagan said she wanted to go to Outback & get her favorite macaroni one more time.  Reagan & I have shared several dinners at Outback this summer as their macaroni is usually her request when it's just the two of us.

I was not dressed for Outback (or really for Chick-fil-A either.  I was dressed for bed.  Or WalMart).  Reagan was torn between wanting her favorite macaroni & wanting the promised time in Chick-fil-A's indoor playground.  You can imagine her joy when I told her we could go eat the macaroni, & then she could go play at Chick-fil-A.  By play at Chick-fil-A, I meant she'd be doing her playing, & I'd be sitting & drinking a cup of decaf, which is how I play.


I documented the evening, naturally. 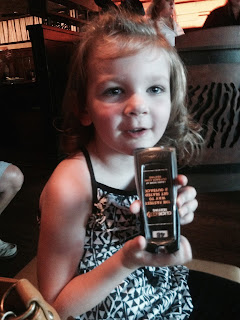 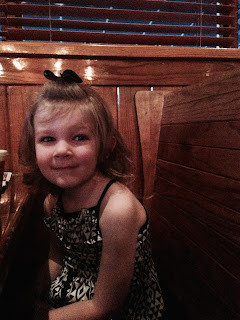 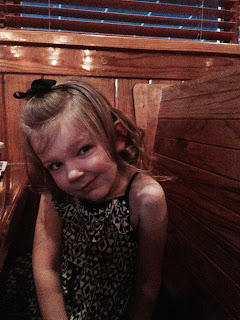 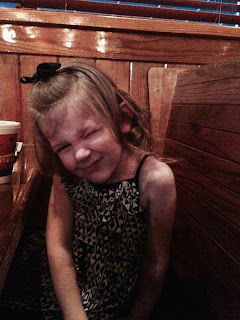 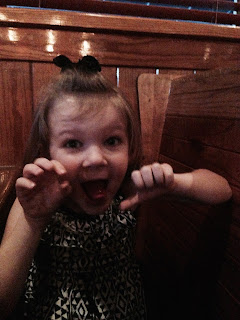 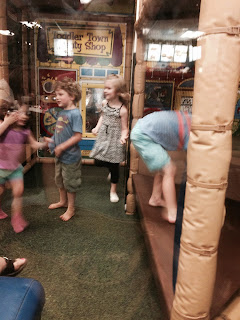 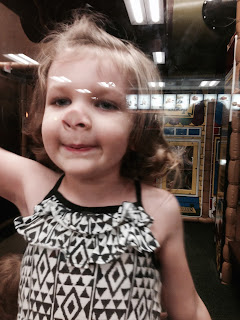 So, as you can see, Reagan enjoyed her Outback macaroni one more time, & she was positively elated by her time at the indoor playground.

If there are small people in your life, the phrase one more time is part of your vocabulary, as well as theirs.  They want to do everything one more time, while you find yourself saying, If you do that one more time!, repeatedly.

It's a phrase that's been dancing in my head this past week for a variety of reasons.  Tomorrow, Lord willing, I'll begin another semester in the college classroom.  Since the fall of 1998, when I entered college at the wee age of seventeen,  I can count on one hand the number of semesters I haven't been in a college classroom in some capacity.

I was five months pregnant with Reagan when I first taught at Delta.  I gave birth to her mere days after turning in my semester grades, & she was a month old when I hobbled back to campus in January, my mind in a sleep deprived stupor, to begin another semester of teaching.

Nearly three years ago, I took a pregnancy test in the first floor restroom at Delta that confirmed what I suspected, that Henry was on the way.  You can read more about the pregnancy test in a public restroom event here, if you're so inclined.  I made it through the spring of 2014, a semester that brought two PICU visits, a diabetes diagnosis, &, the cherry on top, a stomach bug that sent Trey to the ER once, Reagan twice.  I had a very understanding supervisor that semester, though I guess most people would try & be understanding about having to take a three-year-old to the ER four times in the span of three months.

As I'd planned, the beginning of another year of teaching at Delta coincided with the end of Harry Potter's time at Hogwarts.  On Friday, I closed book seven, tears streaming down my face, & my inaugural read of Harry's tale came to an end.  I'm not ready to talk in detail about the series; it is too soon.  I will say that if you have not read this series, these seven books ought to soar to the top of your "to read" list.  If you do not have a "to read" list, hang your head in shame for a moment, & then sit down & make one (you can do it electronically on Goodreads).  Begin the list with Harry Potter and the Sorcerer's Stone.

Much like Harry's infamous scar, his story has marked me in significant ways.  There are a million things Rowling does well - does perfectly, mind you - in the seven books of the series, but today I am thinking about the opening of each book, which are all different, & yet the same in that we again meet Harry in the summertime, & as Harry is, we're giddy with anticipation over the beginning of another year at Hogwarts.

The pageantry of it all is wonderful: the arrival at King's Cross Station, the magical leap onto platform nine & three quarters, the bustling of students, some already donning their Hogwarts' robes, securing their luggage & finding a seat as the scarlet Hogwarts' Express prepares to whisk them away to begin another magical year.

What I didn't know when I began reading book six was that Harry's sixth trip to Hogwarts is his last as a student.  It is his final ride on the scarlet steam engine that faithfully carries him away from King's Cross Station, away from the life he lives every summer, a cruel existence under the watchful eyes of his Uncle Vernon.

The seventh book in the series is, of course, wonderful, but I was a little crushed when I realized that Harry doesn't return for his final year at Hogwarts.  When I reread the series, & again read the opening of the sixth book, I will pay close attention to Harry's final journey to Hogwarts.  I didn't know it was his last.  I wanted Harry to make the journey to Hogwarts one more time.  I wanted him to have one more opening feast, one more chance to watch the Sorting Hat work its magic.

Tomorrow may be my last first day of a fall semester teaching at Delta.  This next year may be my last to teach at the collegiate level (of course, it is possible I'll reread this blog in twenty years as I prepare to enter the classroom & begin my twenty-fifth year at Delta).  I simply don't know where I'll be come fall 2016, but Harry's story has me thinking about so many things, & one of those is the value of today, the foolishness of assuming tomorrow will unfold as you expect.  Tomorrow morning, despite the utter chaos of the first week of classes on a college campus, I am going to be radiantly positive for my students.  I want them to roam the hallways whispering about how excited I am about the upcoming semester.

I know he's fictional (I know, okay!) but I experienced considerable sadness when I realized Harry would not have one more ride to Hogwarts, that his final year of school is snatched from him (& me!).  I can reread Harry's story, & I will.  In life, there are no rereads, which is why I strive to be in the business of regret management, to assume, in all things, that I have one more time, because eventually, I will be right.

When your kids whine one more time, let that trigger the realization that someday, & you likely don't know when that day will be, they will ask you to do something one more time, & you will indeed do it one. more. time.  Life moves, & it's often not until months or even years have passed that you sit down one day & realize that no one in your house uses a pacifier or a bottle anymore.  You think about all the times you searched the house for a missing pacifier, or stood & loaded the dishwasher one more time, taking those bottles apart so they'd be thoroughly washed, & now, looking back, you would not mind doing it all one more time.

Always do your best to focus on today.  I am ashamed of the extent to which I sometimes plan for & look forward to the future, to the detriment of today, of the joy that is before me now.  Unlike Rowling, who exerted total control over Harry's world, we have little to no control over our world, & we have no idea what will unfold today, this day, for the last time.  Assume every day is one more time in the literal sense of that phrase.

So, tomorrow, I will journey alone to Delta, a mug filled with coffee in my hand.  I will listen to my usual anthems (White Snake's "Here I Go Again," a couple of Queen songs, & then some deep breathing while "Peaceful Easy Feeling" plays).  I will scramble for a parking space because students have occupied all the faculty spaces.  One more time, I will welcome roomfuls of trepidatious college students to their Public Speaking class, where student positivity goes to die.  One more time, I will say, for my benefit as much as theirs, This semester, like life, will be what you make of it.

I may even make a change to the syllabus (I mean other than changing Spring 2015 to Fall 2015).  I may add Dumbledore's wise words, "It is our choices, Harry, that show what we truly are, far more than our abilities."  It is, I think, a most excellent sentiment with which to usher in one more semester of Public Speaking, a course that strikes fear in the heart of even the pluckiest of students.