When I was two years & eight days old, my only sibling, Jessica, was born on a Saturday night in October.  Arriving during LSU's homecoming game & not much caring that she'd interrupted it, she continues, nearly thirty years later, to care little for college football.

Reagan, a first-born herself, comes from a long line of first-borns: her parents, her grandfathers, & her paternal grandmother are all first-borns. I've never read much about birth order, but it supposedly matters somewhat in shaping personality. This Time article, published in July of 2006, sheds some light on the reasons siblings are so fundamental in shaping who we are:


From the time they are born, our brothers and sisters are our collaborators and co-conspirators, our role models and cautionary tales. They are our scolds, protectors, goads, tormentors, playmates, counselors, sources of envy, objects of pride. They teach us how to resolve conflicts and how not to; how to conduct friendships and when to walk away from them. Sisters teach brothers about the mysteries of girls; brothers teach sisters about the puzzle of boys. Our spouses arrive comparatively late in our lives; our parents eventually leave us. Our siblings may be the only people we'll ever know who truly qualify as partners for life. "Siblings," says family sociologist Katherine Conger of the University of California, Davis, "are with us for the whole journey."


Siblings can be a blessing, & sadly they can also be a curse when the consequences of their poor decisions echo throughout a family. I am fortunate to have a sister who, at times, is the only person in the world who shares my humor, who understands my frustration with the endless displays of grammatical incompetence plastered all over the web, & who will always sing Princess Amneris' lines while I take Aida's. If my dad is in the car, he can do a pretty impressive Rademes.

It is with a full heart & an awareness of my abundant blessings that I announce that, the Lord willing, Reagan's younger sibling will arrive sometime early next summer. This past Tuesday morning, my suspicions raised, I took a pregnancy test. Pregnancy tests are interesting. I buy mine at the dollar store (where they literally cost $1), & then if anything interesting shows up on the cheap test, I buy a more expensive one. I'm not going to spend more than a dollar on something I urinate on until there's evidence to suggest a more expensive test is warranted. I watched the cheap test & thought there may've been a hint of a second line, but it wasn't convincing, so I went back to sleep (for my male readers: a second line indicates pregnancy; the first line is the control line which indicates the test is functioning properly). An hour later, I shuffled back into the bathroom to get in the shower & there sat the cheap test on the counter; the line had slightly, slightly, darkened, but I remained skeptical.  This is what I saw: 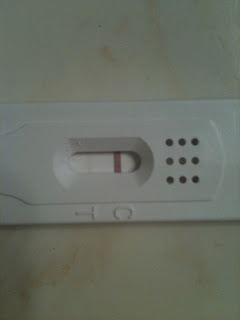 The test directions state that any line that shows up after ten minutes should be considered invalid anyway. They really toy with the emotions of potentially pregnant women.

I showered & dressed, & then googled things like "faint line on pregnancy test," "faint line on dollar store test," "sensitivity of dollar store test . . . "  I learned many things. First, a line is a line, & the depth of color doesn't necessarily matter (with Reagan, a dollar test immediately gave me an obvious fat second line, but I was about a week further along). For comparison, my first indication Reagan was on her way: 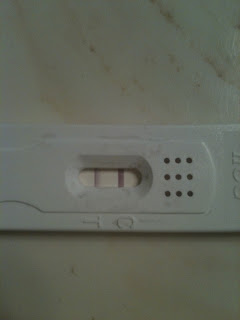 
I then drove back to Delta, planning to teach my speech class & then go home & urinate on the more expensive test from Target. However, I had a suspicion if I didn't go ahead & take the test I'd end up dismissing my speech class incredibly early . . . so, in the first floor restroom at Delta Community College, I took the more expensive test, & this is what I immediately saw: 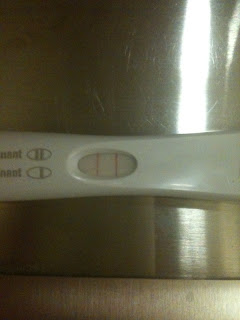 I wrapped up the test (because of course I am going to save it), washed my hands, & left the restroom with a smile on my face. As I walked to my speech class, I wondered, as I'm sure you are, how many other pregnancy tests have been taken in the restroom at Delta Community College.

I'm telling you all this now because all was revealed to the really important people last night via the always clever "Big Sister" shirt. Jessica & Heath are in town, so we all gathered at my parents to eat lasagna & have an early birthday celebration for me & Jessica, both October babies.


Attempts at a pic of me & Reagan in her "Big Sister" shirt: 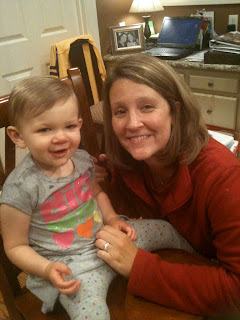 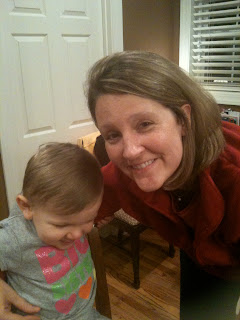 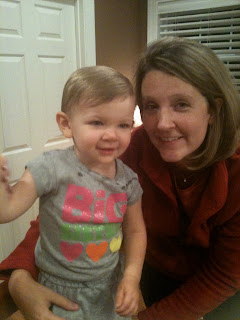 Between pregnancy & the LSU game, simply excuse the bags under my eyes & the absence of eye make-up. Thanks.

I recall in my first blog post I lamented that I didn't begin blogging sooner, while I was pregnant &, as I realized after Reagan's birth, had endless amounts of free time on my hands. So, perhaps this time around you'll be treated to the ups & downs of pregnancy, assuming the surging hormones & expected nausea don't keep me away from the computer. If you've ever considered buying stock in Tums, now might be an opportune time to take the next step. The heartburn is already flirting with me.

My fear is that I will, again, stop wanting coffee. When I was carrying Reagan, from about month two until the middle of month six, I didn't want coffee. I wanted to want it, but the desire just disappeared. I didn't know what to do in the mornings. I'd always suspected my attachment to coffee was at least in part psychological, & I was right as even when the physical desire to drink it was absent, I continued to stare down my coffee pot in the morning, willing myself to want at least one hot, steaming cup.


Please keep our growing family in your prayers, especially Reagan, who quirks her eyebrows suspiciously at me when I tell her there is a baby in my tummy. I think maybe she thinks I've taken one of hers. She has no idea what's in store for her; I pray that whether she is an an older sister to a sister or a brother, theirs is a relationship that is a blessing to them both throughout their lives.