I've never been at a loss for blog material.  There's always plenty of fodder in my head, & in my life, to share on the blog, & that is certainly the case today.  There are several unfinished blogs neatly shelved in the "Drafts" section, with topics ranging from selecting rugs online, to illegitimacy rates among various ethnic groups & their sociological implications, to the Christmas music of Karen Carpenter, to the anger I feel when rape allegations are made, but no rape occurred.  Really, y'all, stop doing this.  There are actual victims of this heinous crime who sometimes struggle to come forward & name their accuser, & seeing stories of rape, like say, one run in Rolling Stone, blown apart by facts in no way helps actual rape victims muster the courage needed to seek justice, & to begin to heal.  If you have not been raped, do not claim you have been raped, even if it means you don't get your picture on the cover of the Rolling Stone.

Anyway, on this fine Monday morning the problem confronting me is not a lack of things I'd like to say, but rather, the time & sanity I need to say them in a clear, concise, grammatically correct way.  Okay, maybe not concise.  If you've ever been in the middle of reading a blog & thought, Please, Anna, get to the point!  Shut up already!  No one else cares this much about Edward Peeta any book!, well, today's your day, because numerous factors about which I shall further elaborate shortly dictate brevity.

Rather than coherent, structured thoughts arranged in paragraph form, we're going to go with stream-of-consciousness today.  I begin with Saturday.  Saturday, Trey turned thirty-six, & Henry hit the eighteen month mark.  I remain in a state of bewilderment over both milestones.  Better yet, let's back up to Friday night, when we ate cake & celebrated the big 3-6 at Trey's parents' house. 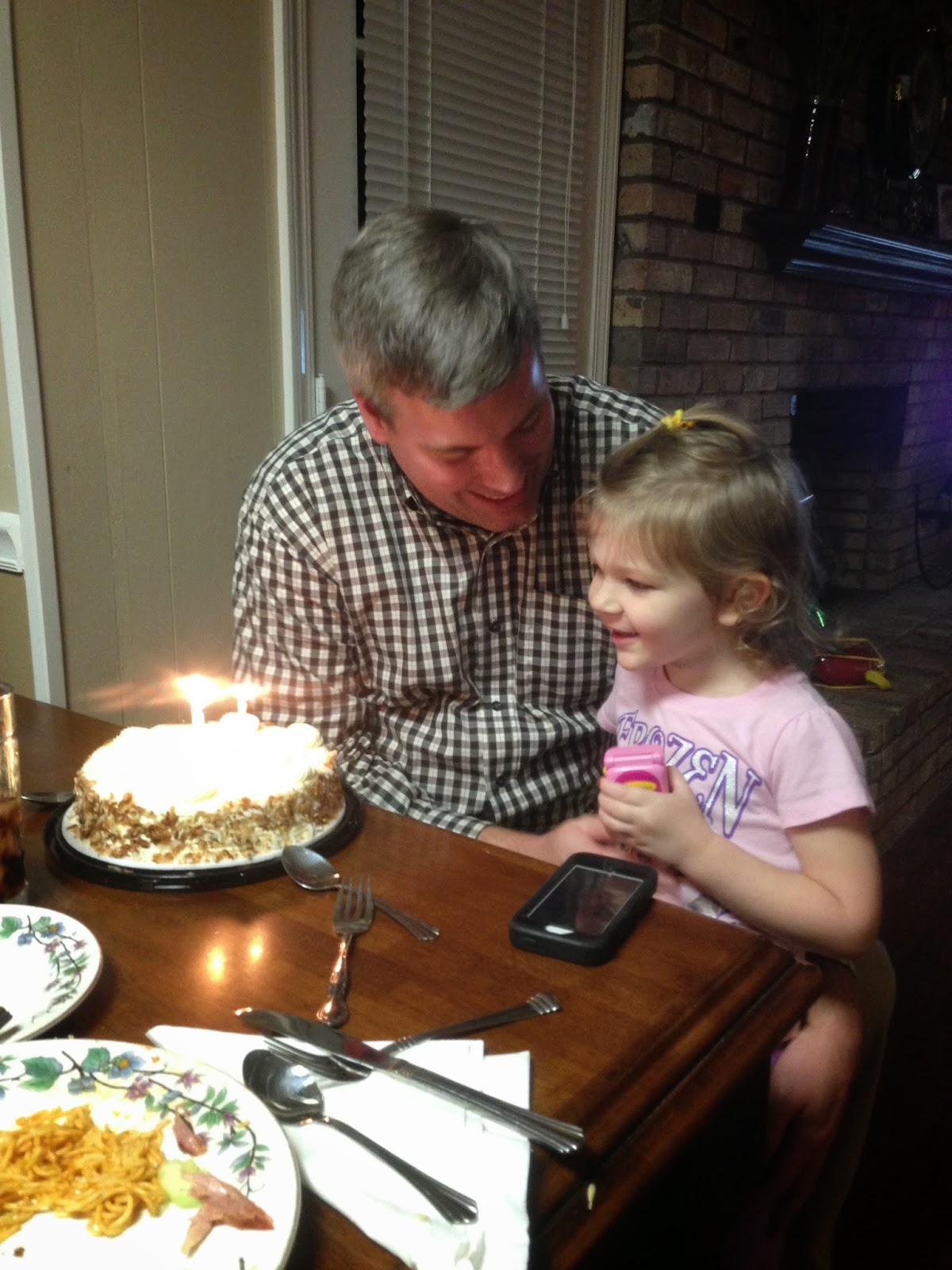 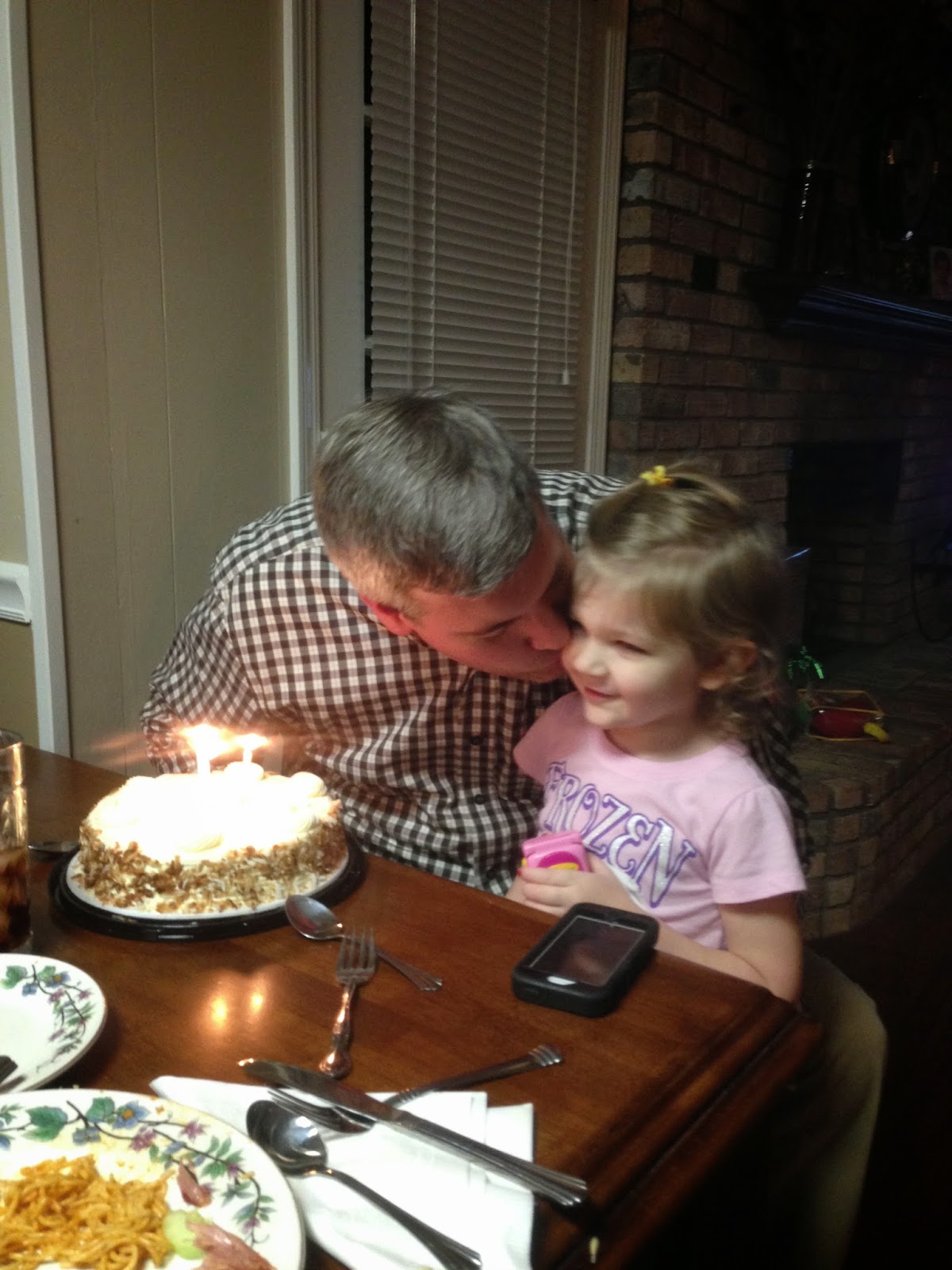 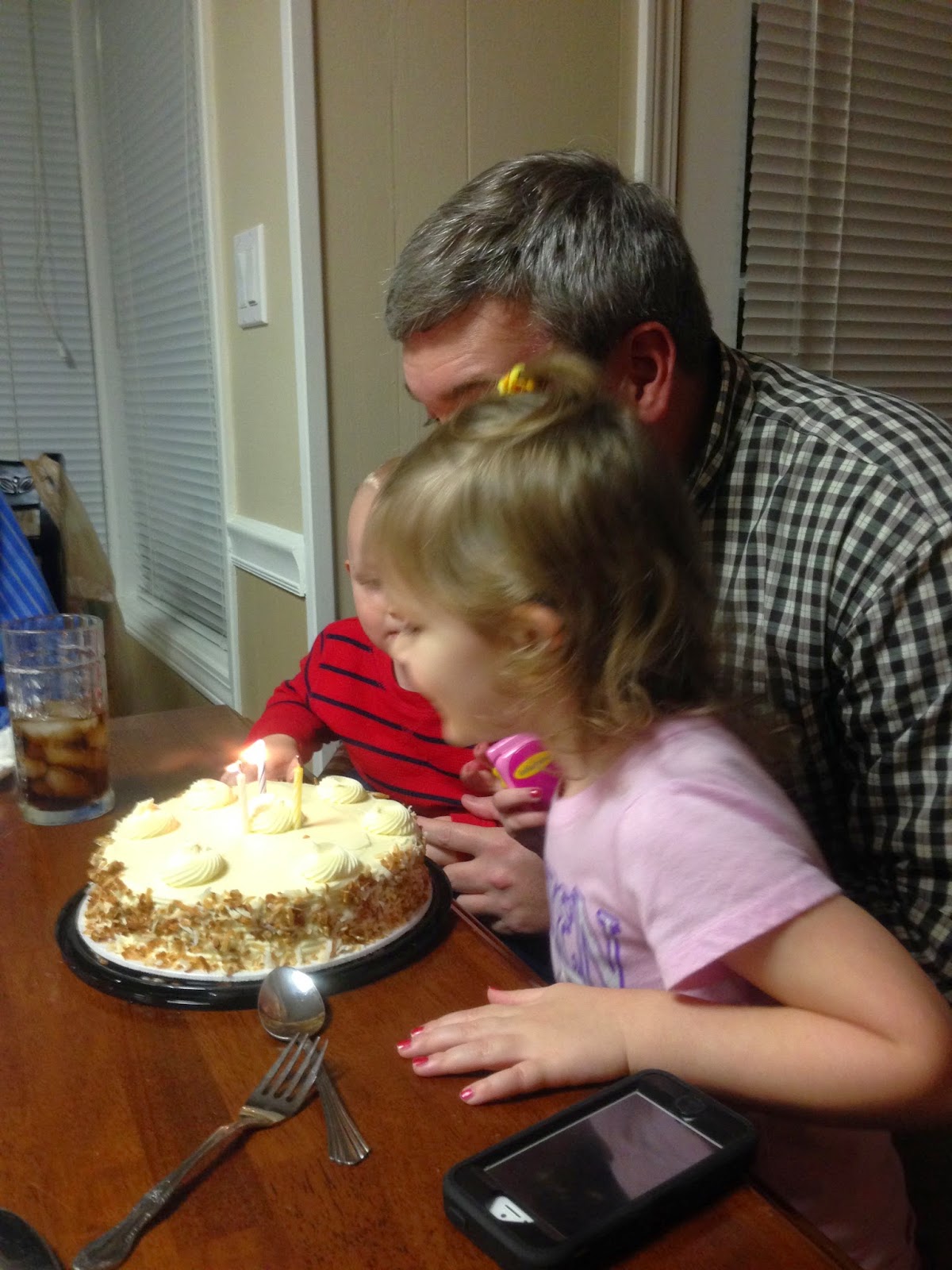 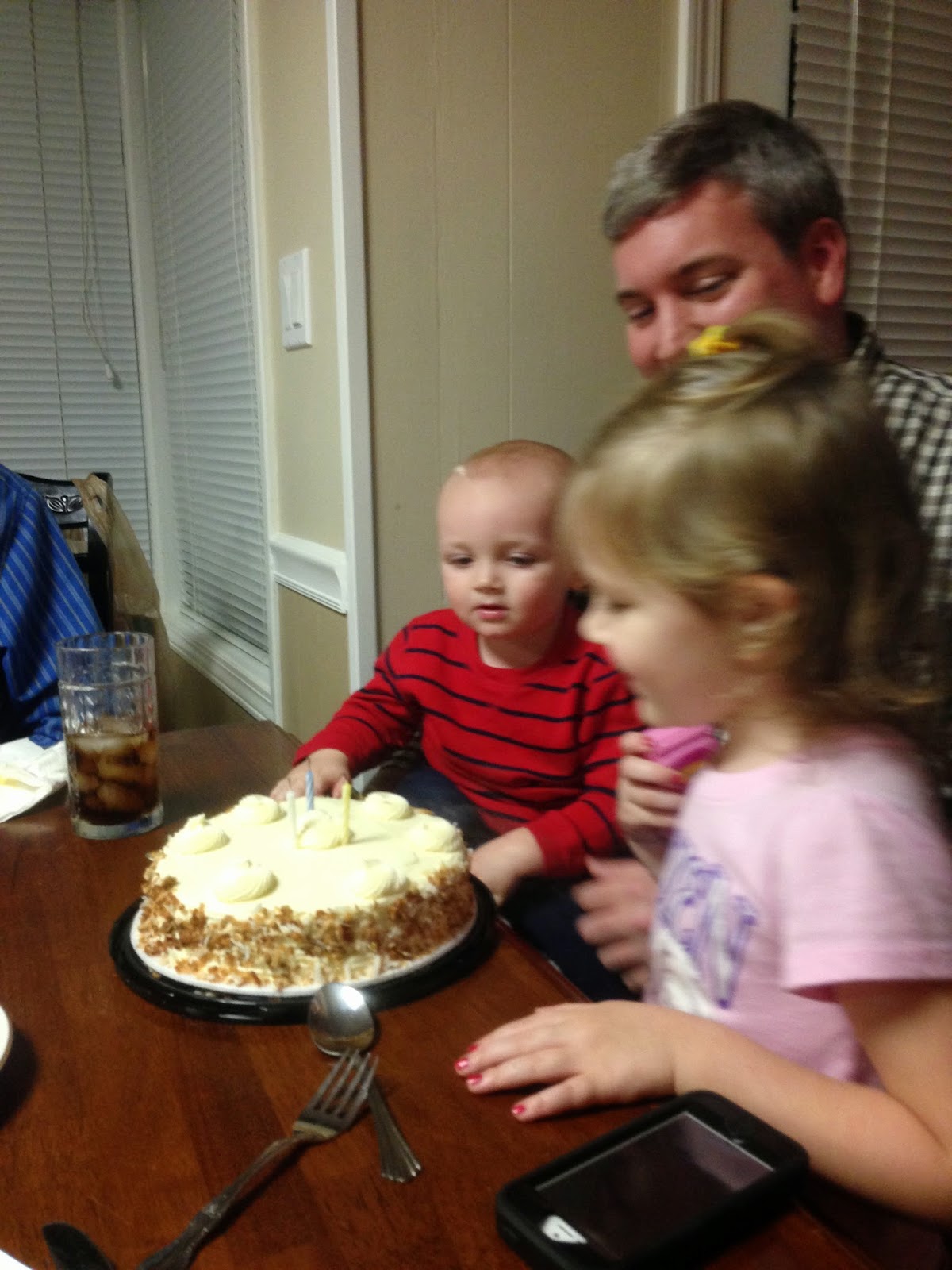 Cute, right?  Moving on.  Oh, but wait.  I cannot move past Saturday without offering the voters of Louisiana a virtual hug for finally, after nearly two decades of her leftist, pro-Obamacare, pro-choice voting, ousting Mary Landrieu from the Senate.  You made me proud, Louisiana!  ((( HUG ))))  (As a reward, the NCAA is giving us a shot at Notre Dame!)  Landrieu's Senate seat, or the Senate seat formerly known as Landrieu's, is in Republican hands for the first time in over one hundred years.  Here in the deep red south, you can now fire a gun in all directions & never hit a Democratic Senator.  I am speaking metaphorically of course; I am not suggesting actually attempting to shoot anyone.  Getting them out of D.C. is, I think, effective enough.

The four of us went to vote as a family, & I took the kids' picture with this huge tree in the foyer of the junior high where we vote (don't worry, Reagan & Henry did not vote, & neither did any of their deceased relatives): 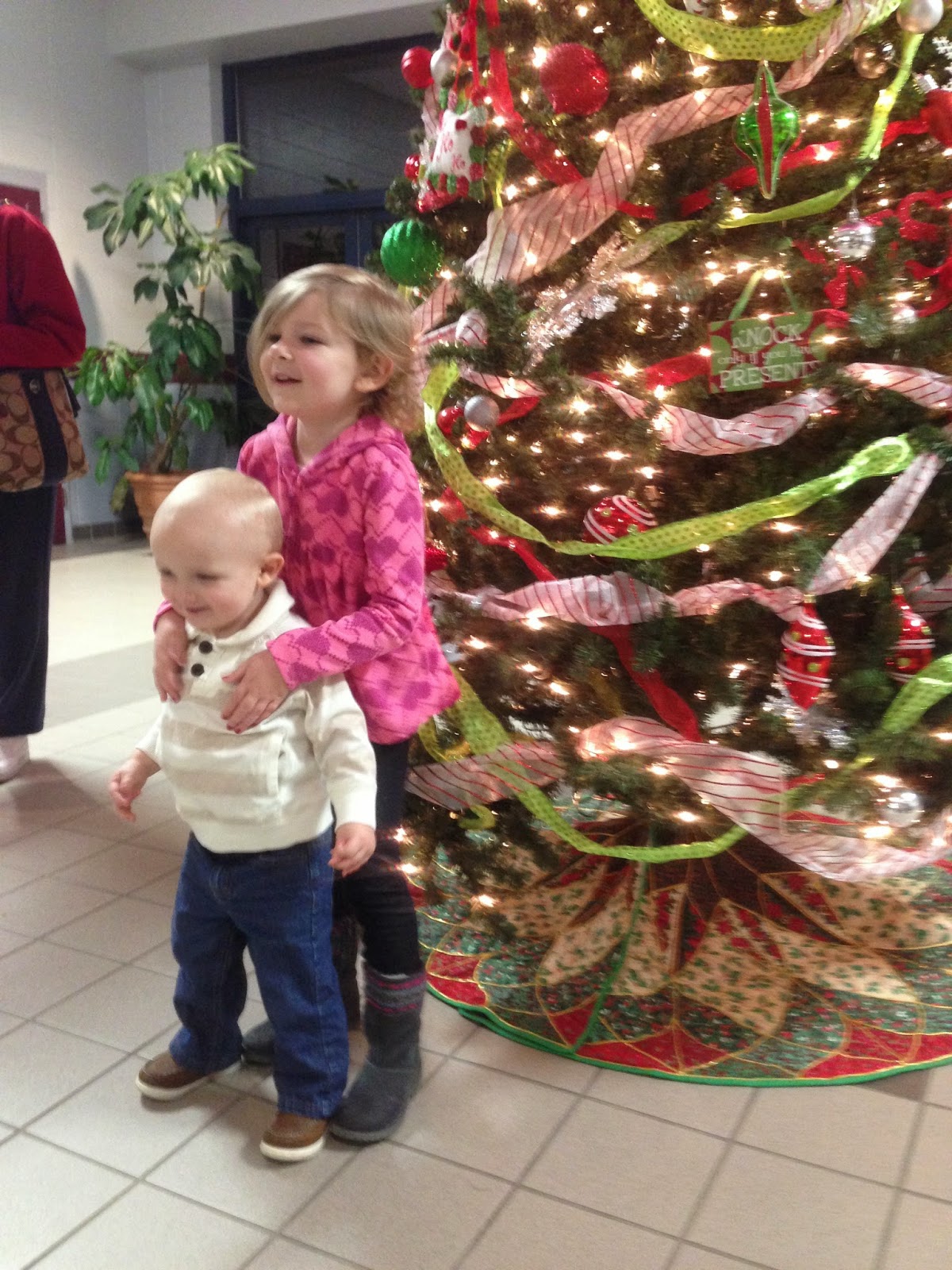 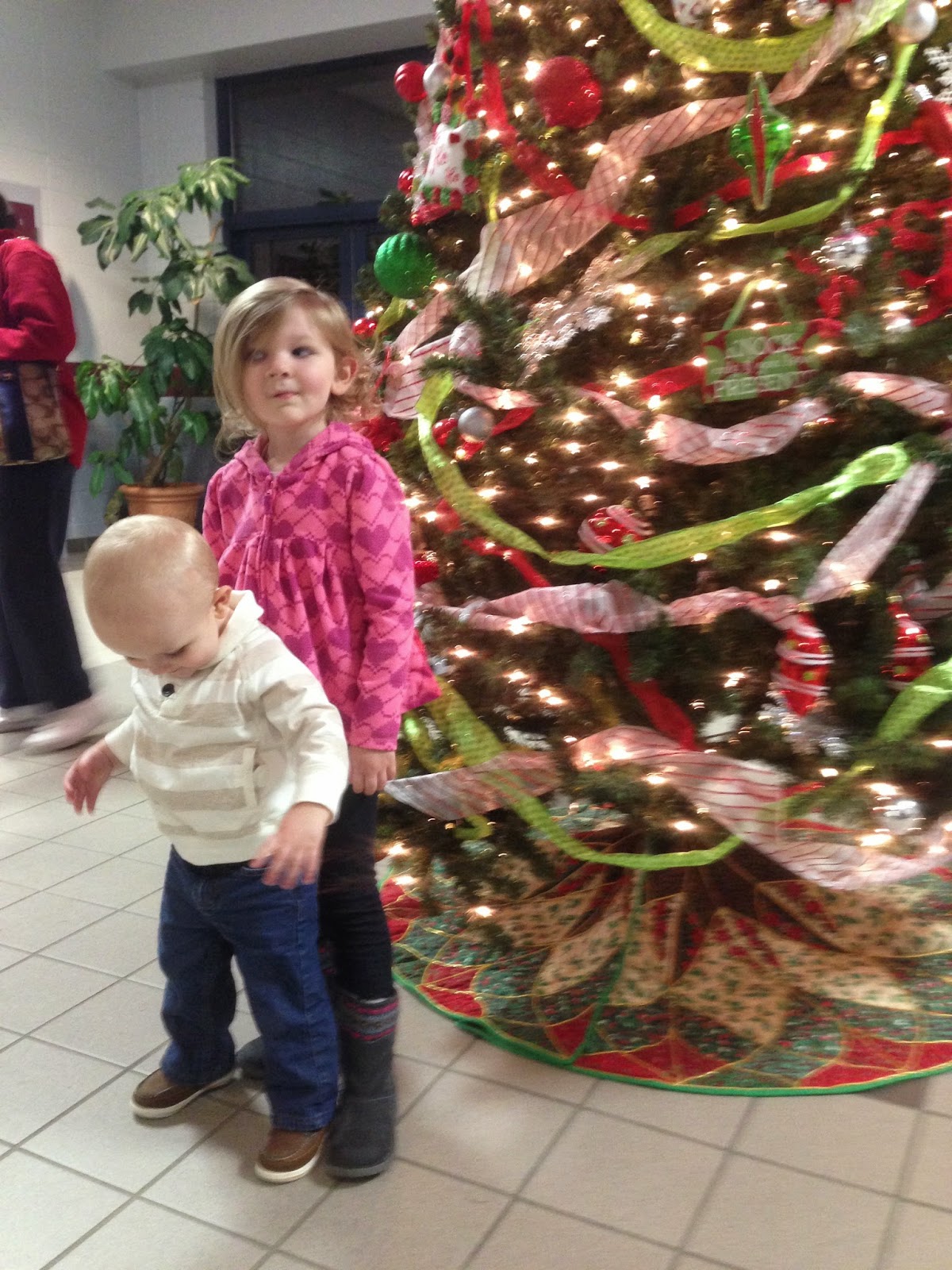 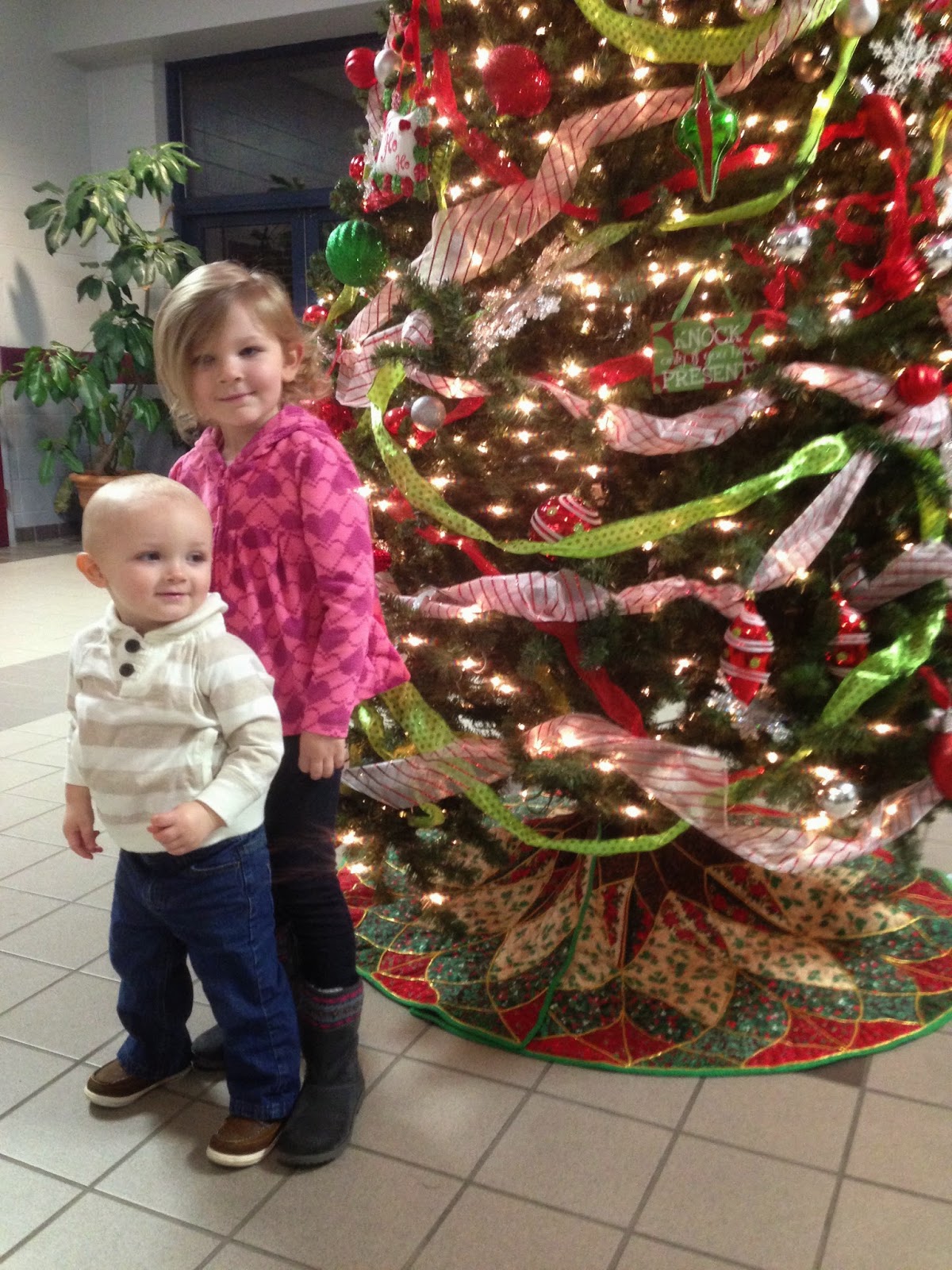 So, not the best photo op.

After the civic experience, we went to Outback, where Henry sat in a booster seat for the first time.  He was not a fan. 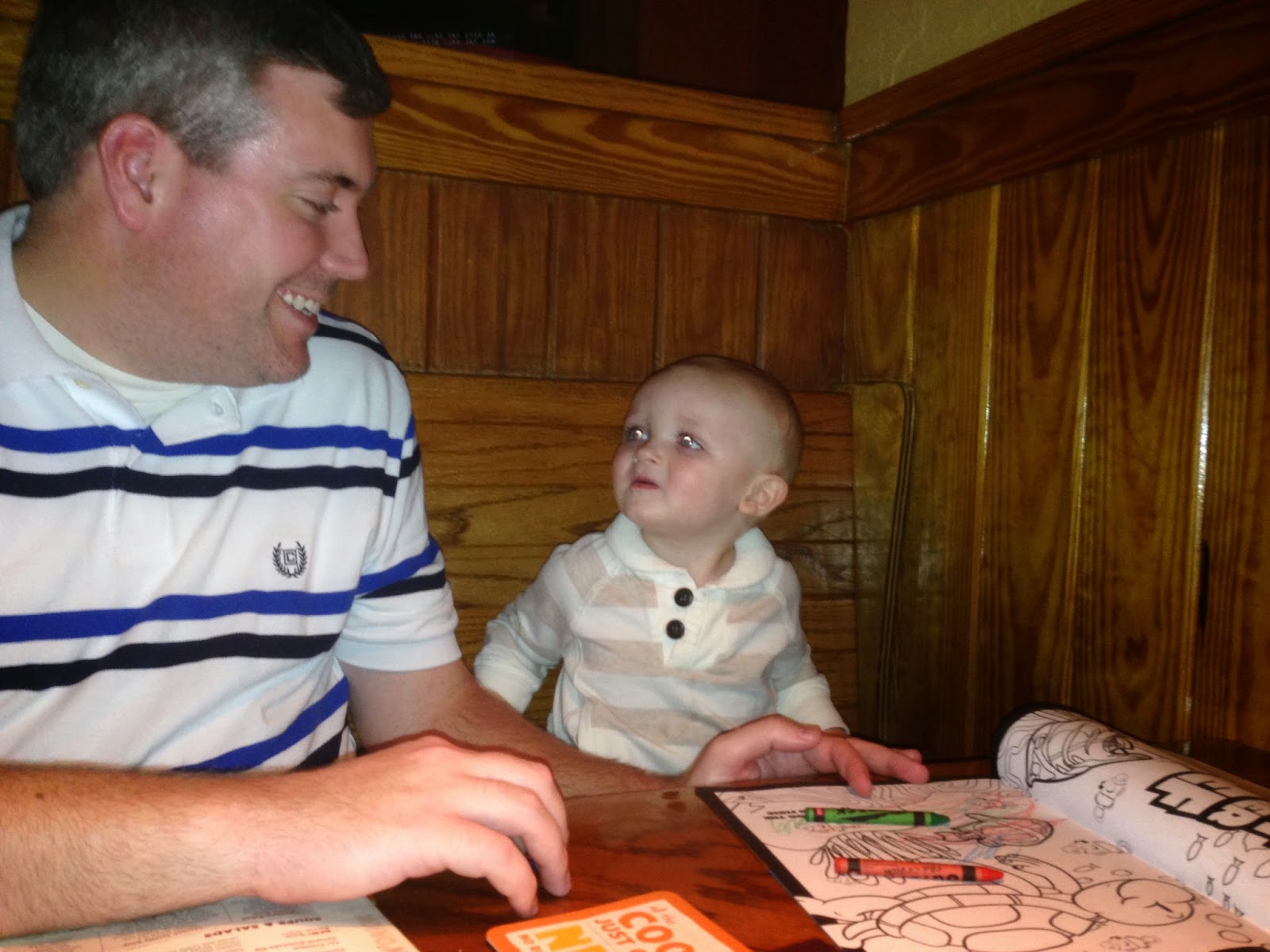 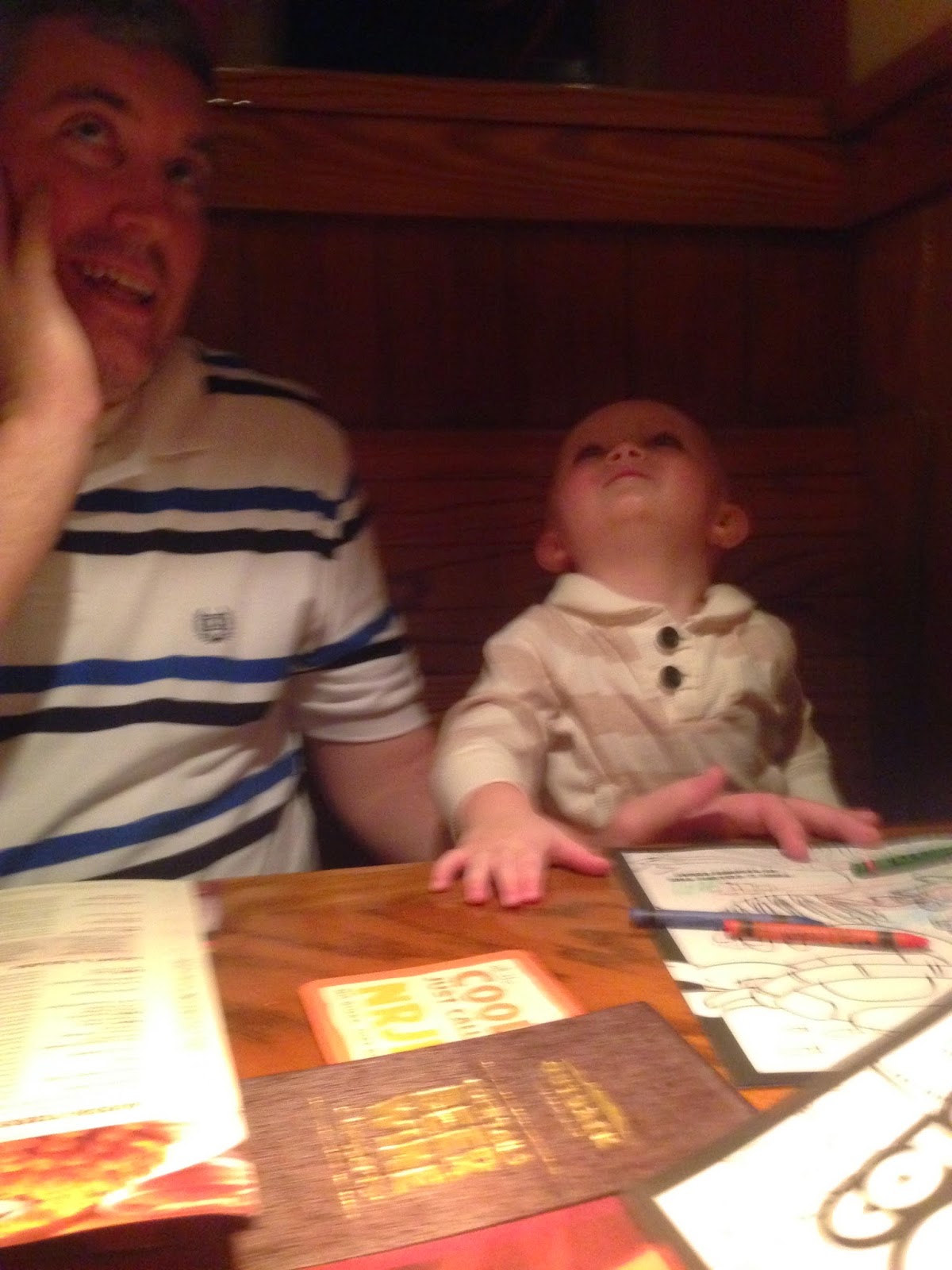 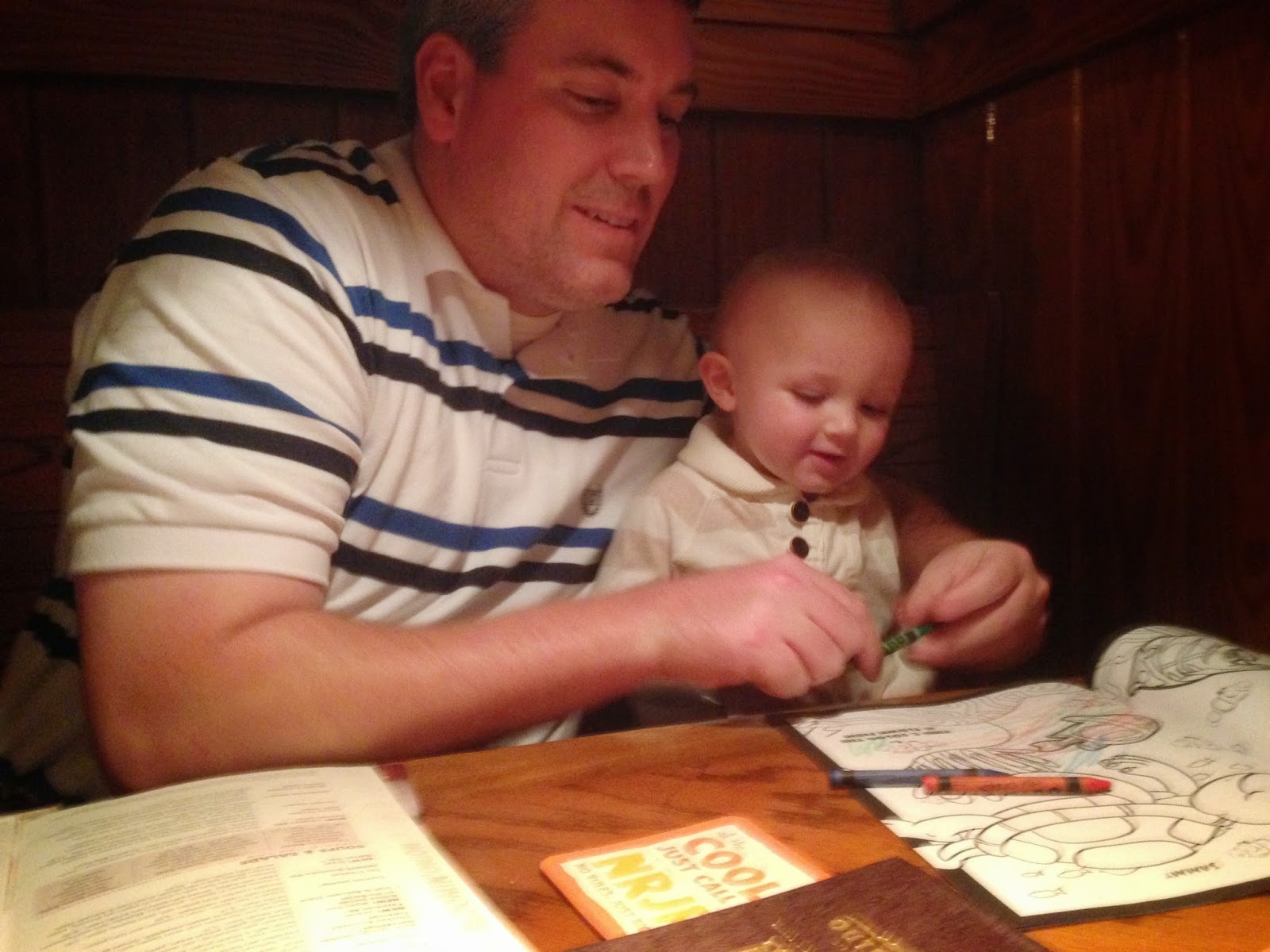 Okay, moving on for real.  A week from Saturday, on the thirteenth, my dad & Reagan will celebrate their birthday.  Together, their years will number sixty-four, & this calls for a celebration.  Reagan's request was for a Frozen birthday party (which is somewhat ironic considering last year, we had to cancel her outdoor party because things were, well, frozen).  After much deep thought, & watching Reagan gleefully sit & devour her popcorn last time I took her to the movie, I decided to invite her friends over to watch Frozen & eat popcorn . . . until they get bored & begin to destroy my house, at which point I'll distract them with cake.

As an added bonus, the Halloween costumes we all spent way too much on will be brought out of drawers & closets &, like Jack Bauer, will live another day.  Reagan will entertain her guests as Princess Anna, which works out well as I suspect no fewer than six Queen Elsa's are on the guest list.  For added fun, younger siblings can take their turn having their picture made as Olaf in Henry's Halloween costume in which he likely won't be spending much time.

A few days after Reagan's Frozen party, I am having a party of my own.  The book club is convening at my house in less than two weeks, & there is much to be done, chief of which is to finish reading Pride and Prejudice, which will be the theme of my party (we've opted not to dress as characters, given that Jane Austen's characters didn't wear yoga pants or jeggings).

I am in the middle of my first Pride and Prejudice read, but it will not be my last.  It is highly frustrating that I have many tasks to attend to right now, because what I want to do is sit in the back of my closet & read this book.  Sometimes, when I'm making a pass through the house during the day, shuttling laundry or searching for the small toy or cup of milk Henry has stashed somewhere (he loves to stash), I glance longingly at the back of my closet & I say, soon, Darcy, soon.

I don't know why I am thirty-four years old & am just now reading Pride and Prejudice.  I blame a less than stellar experience with Northanger Abbey in college.  I did read Sense and Sensibility a few years ago with the book club, and it is good, but Pride and Prejudice is in another league entirely.  It is an absolute delight to read (& yes, this is another blog stuck in "Draft" purgatory: the many reasons Pride and Prejudice is awesome . . . or some other better title).

I feel I owe Ms. Austen a public apology; I've been hard on her at times in the past.  Forming an opinion on Austen without having read Pride and Prejudice is like reading "Hills Like White Elephants" & declaring Hemingway a loser who relied too heavily on symbolism without having cracked the pages of one of his novels.  It's like watching Ohio State beat Wisconsin & drooling & handing them a spot in the playoffs without at all considering that Wisconsin opened the season with a loss to a mediocre LSU team that could not score even one point against Arkansas.  As is the case so often in life, you need a complete picture before rendering a verdict.  As is the case so often in life, my sister's complete fanaticism over a book is totally justified.

If it hasn't already occurred to you, the upcoming Frozen party & the upcoming Pride and Prejudice party have one thing in common, & that is that both require the entrance of other people into my home, people who probably expect me & the kids to be wearing non-pajama clothing, & people who might reasonably expect my toilets to be somewhere in the neighborhood of sparkly. 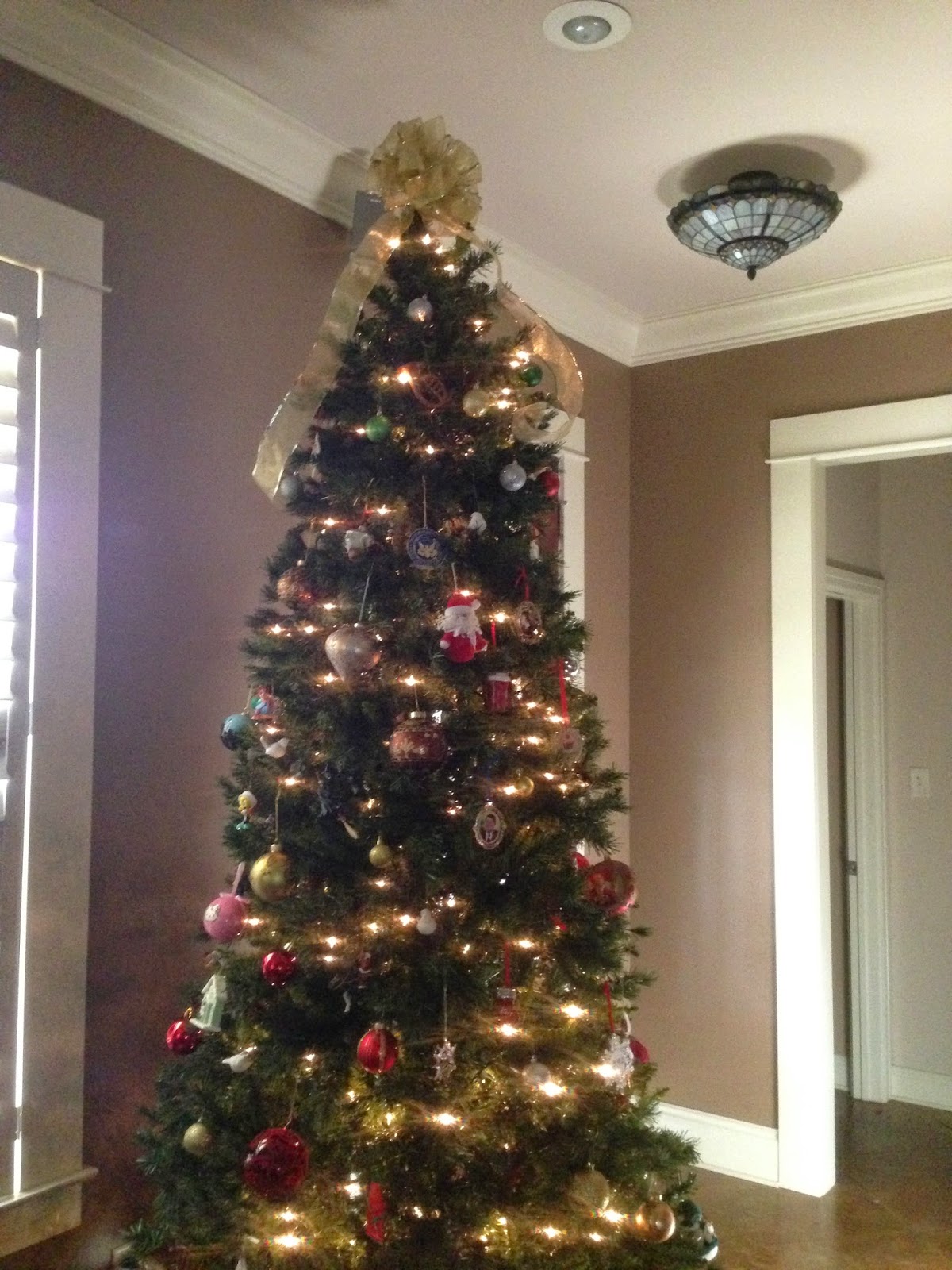 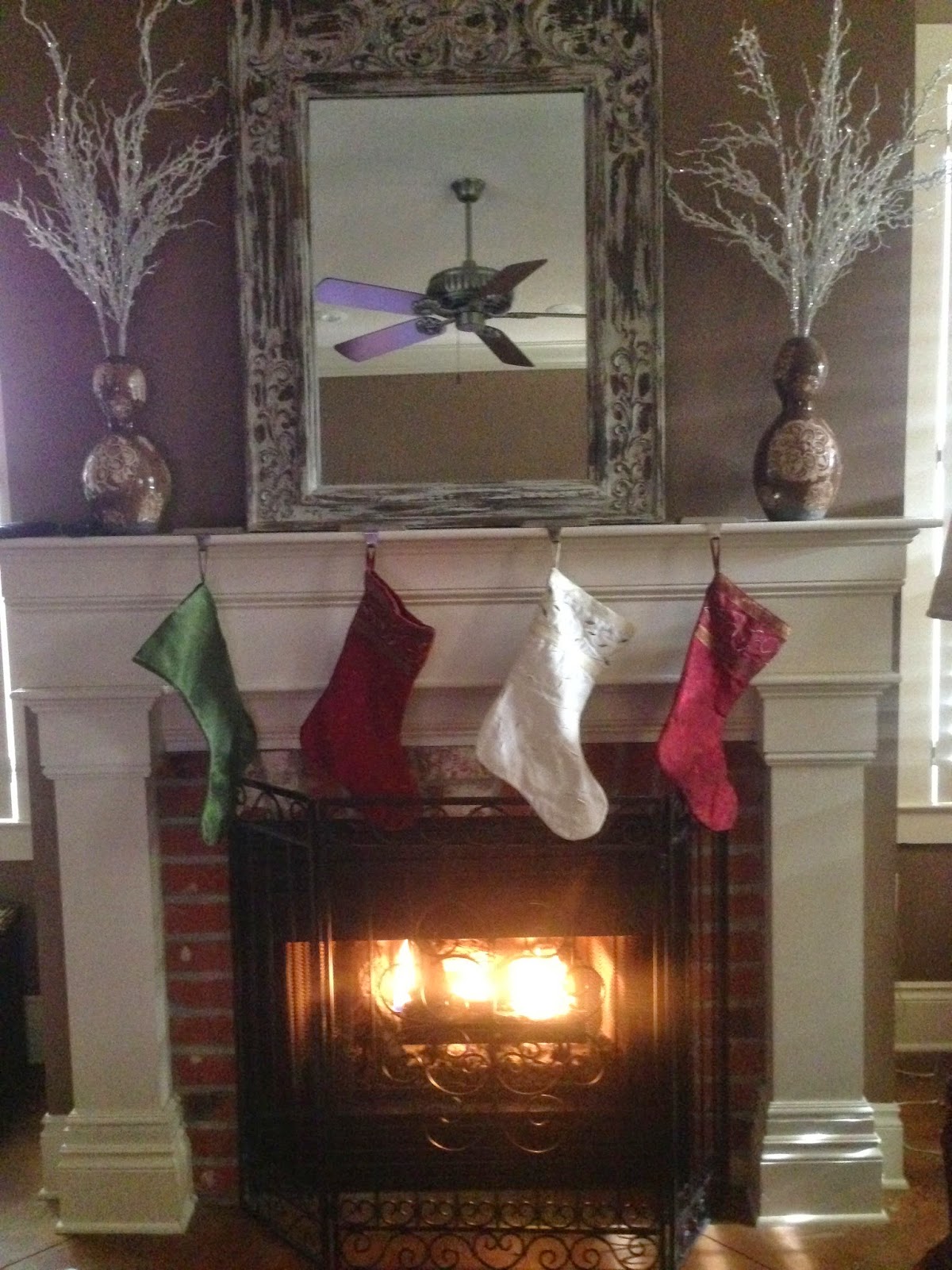 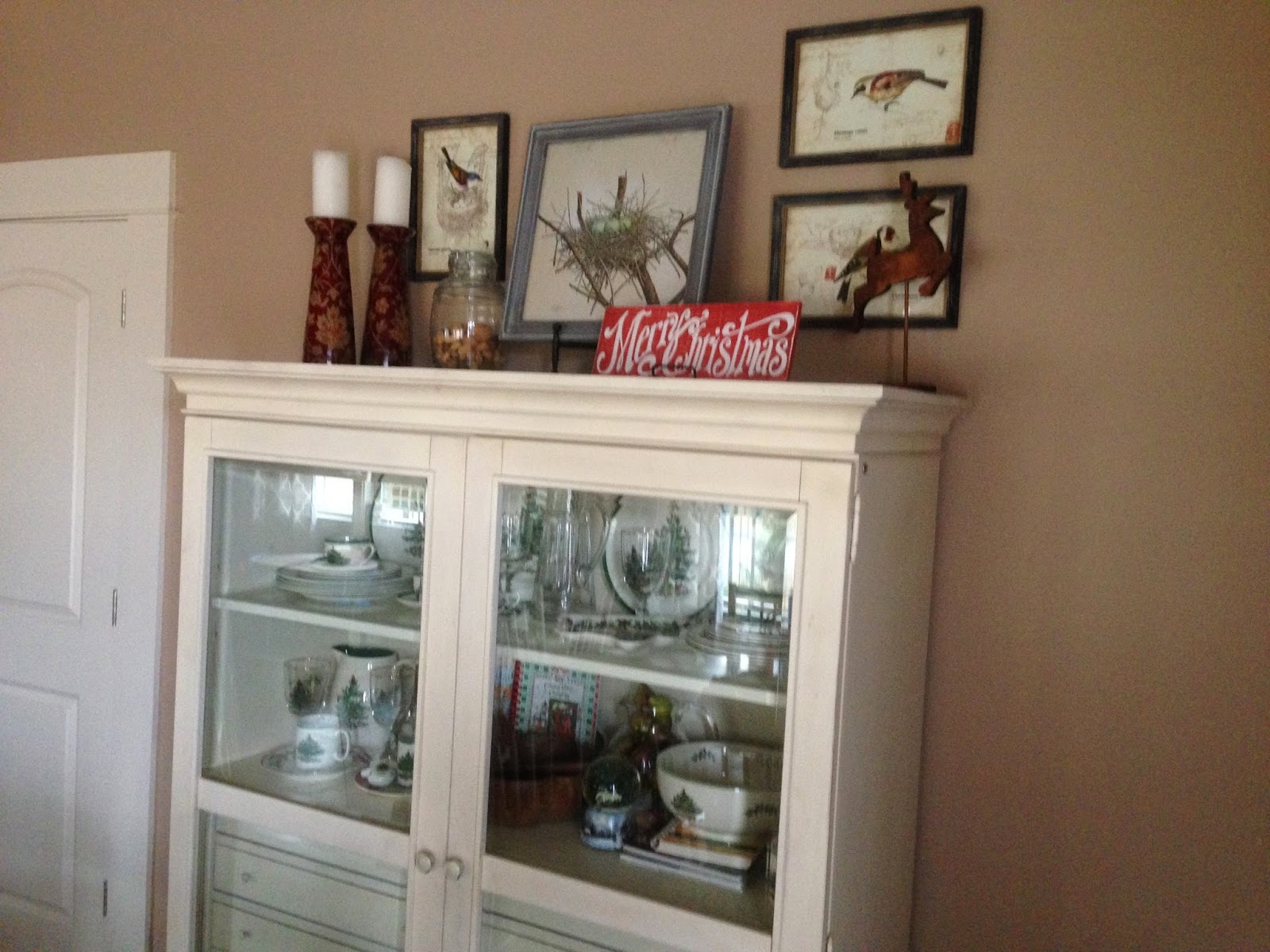 Do you see them?  There, above the china cabinet?  My birds!  Stalking World Market's website was a total success.  The birds came in the mail a few weeks ago, & now have a permanent home nesting above my china cabinet.  It's just as nature intended.

So, now that the house is festively decorated, I've been (attempting) to get down to the business of cleaning - - like really cleaning, not like throwing-all-the-toys-back-in-the-big-basket cleaning.  It is a good & healthy thing to invite people into your home every now & then, at least for me, because if I did not, there are items that would become so affixed to my countertops that I don't know if the Lord's shout from Heaven when He descends could loose them.

It was during this process of deep cleaning that I discovered that most, if not all, of the door handles in our home are covered in a hard, crusty substance that I've determined is dried banana.  Henry can eat a banana like nobody's business.  If you know of a banana eating contest for toddlers, alert me.  I have not thrown out a banana in over a year.  When he sees one, his breathing accelerates.  He loves to waddle through the house, chest out, banana in hand.  It is during this daily jaunt that he has apparently opened every door in our home with his sticky, banana stained hands.

You know that scene in Jurassic Park where they finally make it to what they think is safety in the kitchen, & they're like, We're safe now, right?, & someone says, Yeah.  Unless they learn to open doors, & then the camera zooms in on this: 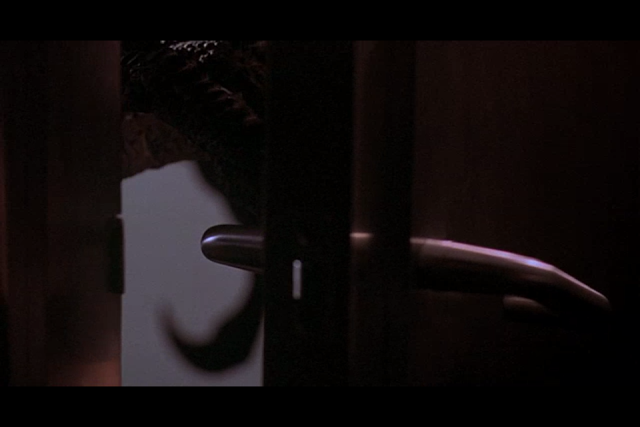 I thought about this scene a lot when Henry's height was finally such that he could reach the door handles in our house, because we too have lever handles, & they're very easy for a toddler (or a dinosaur, apparently) to open.  Henry lets himself in & out of room after room as he pleases now, leaving a crusty, dried, fruity mess in his wake.

In vain I attempt to be brief.  Sorry, Jane Austen's writing is replete with the phrase in vain, & I find myself inserting it in all sorts of places now.  I suspect that, in addition to my tendency to be longwinded, my subconscious would rather sit & fiddle on the MacBook & drink coffee than get up & continue the business of scraping dried banana off hard surfaces.  To those of you reading who've been invited to either of the upcoming parties in my home, or both parties, as the case may be, let me say now, in vain have I attempted to rid my door handles of dried banana.

In vain have I attempted to address all that is pressing on me this morning.  The house cleaning is obviously vexing me, yes, but I also have grades due this week, Reagan & I need to go to the dentist (like last summer), the dog needs her annual shots at the vet, I believe Henry needs a few eighteen-month shots, & there are zero presents, of the birthday or the Christmas variety, wrapped.

I do have some new rugs en route to the house, & we are well stocked with bananas, insulin, & coffee, & so Miss Zeigler & Mr. Zeigler & I shall eagerly await news of Mr. Zeigler's return, whereupon I am strongly considering bolting forthright with panicked declarations of all that I must procure at various locales in preparation for forthcoming gatherings.