The end of a melody is not its goal; but nonetheless,
had a melody not reached its end,
it would not have reached its goal either.

In the 1998 fim The Truman Show, a movie you need to sit down & watch if you've never seen it (if for no other reason than to better understand the numerous references I have & will continue to make to the film on this blog), Truman Burbank, played by the capable Jim Carey, stars in a reality show about his life.  The catch is that he is unaware of his fame.  As you'd expect, there are those who feel this is unethical, & one such individual breaks onto the show's set & confronts Truman, & Truman notices this pin on her sweater:

Truman thinks the pin is some larger reference to life, rather than a means of calling attention to the ethical issues of a reality star who is uninformed about his, well, reality.  If you've seen the movie, you know how it all unfolds (if you haven't, watch it!).

I've been thinking about endings a great deal lately, as I'm sure you gathered if you caught my rant last Monday.  In addition to that messy business weighing on my mind, this Friday I plan to post the final chapters of the book, & I am rereading them & changing a few things here & there & just over-thinking everything. 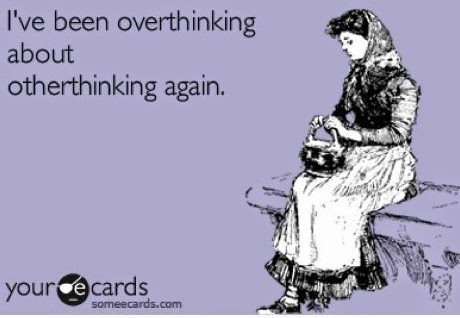 While I don't plan to write a series, multiple book series are never far from my thoughts because I overly emotionally invest in them, & because their endings are so highly anticipated (& then debated), at least by me & others who lose sleep & abandon responsibilities because you cannot stop until you know how it ends.  I've also come to realize, after a bit of over-thinking about why I am so drawn to young adult books, that when I was younger & it would have been appropriate for me to fangirl over fictional characters, my options were extremely limited (that, & the Internet was a non-factor, & the Internet is where fangirls congregate & squeal together, often via clever memes).  I read all the usual suspects, Nancy Drew, Babysitter's Club, Sweet Valley High . . . it's no wonder that, at twenty-nine, I was so smitten with Edward Cullen, or that I think Peeta is the greatest thing since sliced bread.  See what I did there?


While she does some things well, Stephenie Meyer's work is not a manual for how to pen a conclusion.  She goes too far.  Way, way, way too far.  Some editor somewhere should have nixed Breaking Dawn & forced her to include the wedding & honeymoon at the end of Eclipse & called it a wrap.  Meyer cannot bear a loose end, even if it's a haphazard thread that has no significance to the larger story she's telling.  She has to tie everything up into a nice, pretty package, & then put a huge red bow on top.  And then retie the bow, & describe it.  If she writes a four book series, you can bet it needs to be three books long; if she writes a 600 page novel (say for example, The Host) you can bet it needs to be about 400 pages.  As a reader, I love detail; I need detail, but she goes overboard even for me.  I enjoy closure & Happily Ever After as much as the next gal, but I could have lived a happy life without Renesmee . . . & the whole icky Jacob imprinting thing.  What's wrong with Jacob permanently claiming his wolf form & scampering away?  Buh-bye, & thanks for the love triangle/non-triangle, because like he ever had a chance.  Meyer just doesn't know when to quit.

As far as book series are concerned, Suzanne Collins is the conclusion queen.

*A brief caveat:  I have never read the Harry Potter books.  It's my intent to do so, however, without the pressure of a movie release hanging over my head, I've no immediate incentive to delve into a seven book series.  It would not be fair to my children.  They need guidance, food, insulin, etc., & none of us can afford a seven book series at the moment.


It's got to be a bit stressful to end a series (which is still no excuse, Ms. Roth).  Oh, the pressure of the final novel, the final chapters . . . paragraphs . . . sentences.  How long do you think it took Suzanne Collins to decide that, "Peeta and I grow back together," would suffice?  After three books, two rounds in the arena, taking down President Snow & the Capitol, Peeta clawing his way back to sanity, losing their loved ones, finally shipping Gale off (!), & returning to the ashes of their home district, scarred physically & emotionally, what Collins gives the reader is, "Peeta and I grow back together."  It's the line that launched a thousand fan fics.  It made me a little angry at first.  Yes, the dandelion imagery is nice . . . the epilogue helps a little.  The final lines are, admittedly, perfection (Real . . . *sigh*).  I realize now that much more than this is venturing into Stephenie Meyer territory.  No need for Katniss & Peeta's daughter to grow up & decide she wants to be with Gale, now is there?

Looking beyond teenage angst, the book endings I hated in high school are those I adore now, & I admit the issue then was me, rather than the way literary giants opted to conclude their novels.  Gatsby's final line (which left me scrunching my face in confusion at sixteen) always tops lists of best closing lines (yes, people really make these lists - - see here & here):

"So we beat on, boats against the current, borne back ceaselessly into the past."

It's the thesis sentence of the entire novel; he sums it all up, right there.  It's not something any writer should reread or think too much about, because it makes you feel like quitting.  Quitting, deleting what you've written, & feeling small & silly for trying.  Granted, my personal life is in much better shape than Fitzgerald's ever was, so that's something.  Maybe alcohol is indeed a precursor to symbolism & nuance.

"After a while I went out and left the hospital and walked back to the hotel in the rain," are Frederic Henry's final recorded thoughts.  That A Farewell to Arms would end with Frederic wandering in the rain should surprise no one.  I was unbelievably sad the first time I read that line.  I was actually surprised that Catherine dies, which tells you a thing or two about my analytical skills & my ability, or lack thereof, to pick up on foreshadowing at the age of sixteen.  After  a few rereads & the passage of years during which I like to think I've grown a bit wiser, I've realized the novel is about much more than Catherine's death, & if you wallow in the misery of the ending, you miss the beauty of Hemingway's exquisite way with words.  You also miss a love story that is in no way negated by its tragic conclusion.  Emerson once said, "Life is a journey, not a destination," and so too are the books I return to over & over again; their endings are somewhat irrelevant.  I return to them because I relish the journey.  Fitzgerald asserted that, "You can stroke people with words," & indeed, the greats continue to do so, years & years after their pens stilled, despite knowing the fate of their characters.


The short list of books to which I flee when I need coddling, when I've had a terrible day, or I just need to escape (without leaving my house . . . or even my bed), is admittedly varied; some of the books were penned by Pulitzer Prize winners, while others, not so much.  One of the books on that list is Twilight.  Stop laughing.  For all the criticism I've leveled against her, in that first book in the series, which is my favorite of the four, Meyer tells a story that I love, & introduces characters in whom I became so invested I followed them through four books, the last of which was long & extremely tedious at times.

There is an innocence to the story that unfolds in Twilight that I love, a fervor & a freshness to the age-old tale of boy meets girl.  While she is no master at manipulating the English language, Meyer is a good storyteller, in my opinion, & she can create characters that captivate readers.  I still contend that Edward is a stroke of genius on her part.  He's seventeen . . . but he's been around for a hundred years (over-thinking things & observing human relationships), so ladies of all ages can feel justified in their fascination with him.  Meyer plucked him out of an Austen novel & paired him with an awkward teenage girl whose skin the reader can easily slip into, & whose willingness to so completely lose herself in a man she loves reminds me so much of Hemingway's Catherine Barkley I sat down & wrote a graduate thesis about it.  Or Edie did.  Something like that.

I hope that those of you who are reading my book will find the ending satisfactory, but more than that, I hope I've told a story you have a desire to return to at some point.  I've found that once you know how it ends & you're not racing to finish to see who lives & who dies or how the love triangle will be resolved, it is a joy to lazily meander through a book you're reading for the second (or third or fourth) time.

I will post the final chapters of the book Friday.  I am not going to change much between now & then, admittedly largely because I doubt I'll have the time to do it.  I actually feel a little anxious about it, & after over-thinking the situation, I've decided the anxiety stems from two things.  First, people are reading what I've written, & some are displaying a bit of an emotional involvement.  That's totally cool, as I know all too well what it is to have a serious case of the feels over something you're reading.  However, it makes me a little nervous because I don't want to disappoint readers (nor do I want them composing angry blog posts directed at me).  Second, my anxiety also stems from the fact that I don't think I am done with my friends in Boulder, & with that in mind, I don't want to paint myself into any corners & tie everything up so tightly that I'd have knots to undo if I return to these characters.  I am searching for a balance between closure & room to breathe, if that makes any sense at all, while trying to remind myself that regardless of the exact wording of the final paragraphs, I've told the story I wanted to tell.

Also, no one dies.