The Time of Your Life

Well, your wait is over.  AZeigler Dailies, Edition: Junk in my old closet, is here.

In the weeks leading up to my recent birthday, my life flashed before my eyes.  Literally.  A quick history lesson: In the late eighties, my parents built a house.  On the second floor of that house, my sister & I shared many happy years in our bedrooms, & we were so busy living fulfilling lives & reveling in all the happiness that we neglected to clean out our cavernous closets.  Ever.

Without further delay, the treasures I uncovered . . .

A memento from Trey's early political aspirations as a college freshman.  I believe he was victorious in this election. 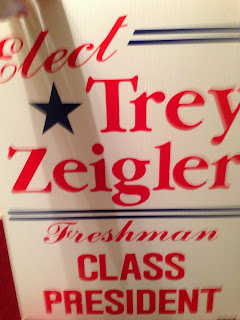 My high school letter jacket - - I played tennis, & while I didn't always win, I always had an amazing tan, & that's what's important when you're sixteen.  No, really. 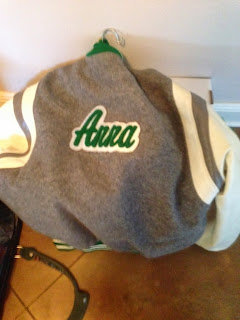 A few goodies from my T-shirt collection - -

Trey bought me this when we were dating in college: 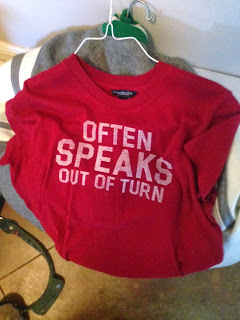 In junior high, one of my biggest struggles was getting out of bed by 10:30 on Saturday morning so I could watch Saved by the Bell.  The junior high years are hard. 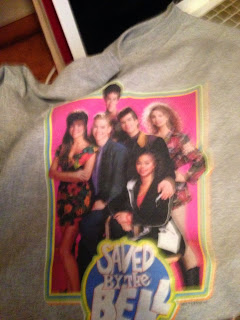 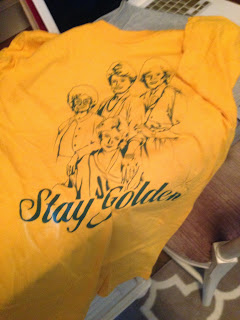 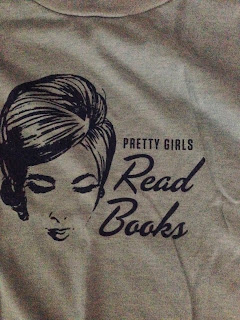 Trey's idea of a Mother's Day gift . . . which I admit I totally love: 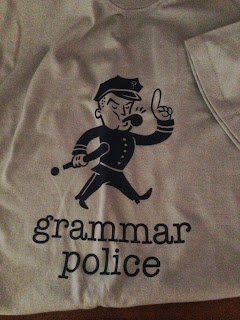 There is nothing I won't buy off the clearance rack at Target . . . & yes, I did wear this Team Edward shirt to several Twilight movie premieres.  It's really not a true obsession if you don't plaster it on your chest & fangirl with the teens at the movies. 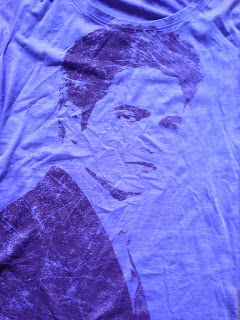 Moving on . . . I'm including these pics for my kids, who'll likely not recognize a CD case when they're older. 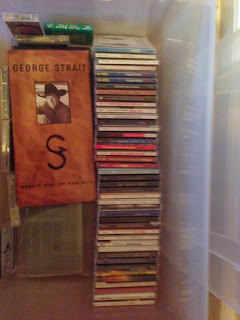 This is a cassette single of Whitney Houston's "I Will Always Love You."  I am totally hanging on to this, waiting for the Smithsonian to call. 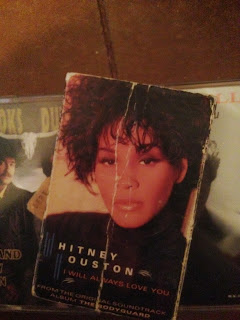 I was into Ariel long before she was digitized: 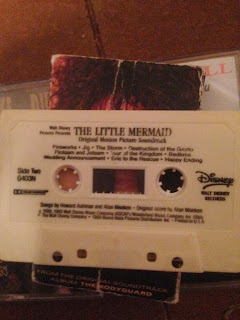 After I'd waded through most of the junk, I sat down with several boxes of cards & letters I'd saved.  I saved this part for last because I knew I'd enjoy it far more than deciding which of my two-hundred T-shirts to toss.

This is one of the many letters my grandfather sent me when I was in college.  He always stamped his envelopes this way - 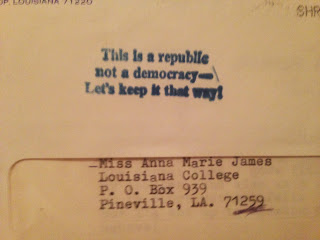 Apparently I saved every card I received when I graduated from high school.  If, in the spring of 1998, you sent me a graduation card expressing your pride in my achievement, & you're not in my immediate family, your card just got tossed.  I know you're gutted.

I kept a few of them, one of which was given to me by Trey & his family.  They all signed it, even my brother-in-law (BIL) Lance, who was around nine at the time.  He of course was not my BIL then; I was simply their awesome-down-the-street-neighbor.  He wished me best of luck in collaege. 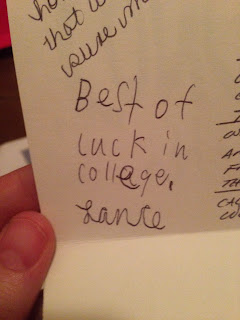 Speaking of collages, I made this when I was a junior in high school.  We had to select an American novel from an approved list, read it, & do all sorts of things in preparation for a presentation we were to give in front of our class.  One of the requirements was to make a collage that represented your novel.  This is when my weird obsession with love of Hemingway & A Farewell to Arms began. 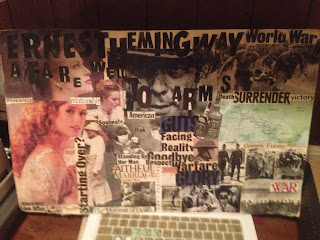 Not only am I not throwing this out, I am considering laminating it.  I still think it's really awesome.

In the middle of all this nostalgia, birthday week commenced at my in-laws house.  My SIL & BIL have birthdays the same week as mine, so naturally Reagan blew out the candles on our joint birthday cake. 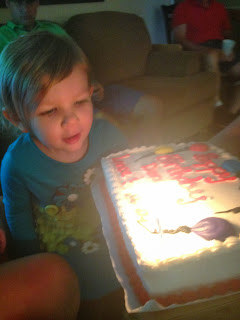 Never one to share cake graciously, I ordered myself a cookie cake.  I did.  When I went to pick it up on my birthday & handed the lady my credit card that bears my name, Anna, she took another look at the cake, which read, "Happy Birthday Anna."  I completely ignored her. 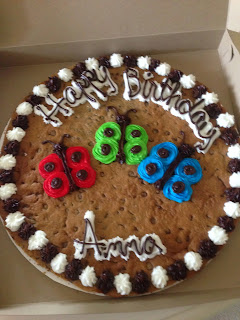 Reagan was beyond excited about the second round of cake that week. 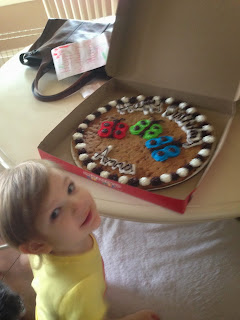 With the help of her Nana, she made me a birthday card, which is awesome.  It's on my desk now. 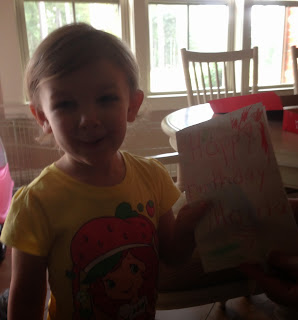 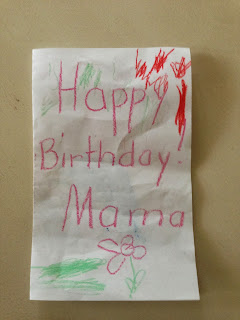 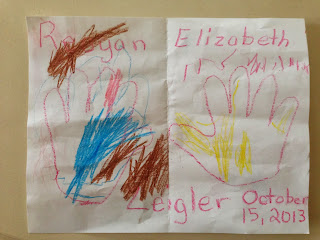 She also picked these for me while I was teaching that morning.  They created a nice ambiance we enjoyed while inhaling cookie cake.  My birthday was on a Tuesday, & by late Wednesday evening, the cookie cake was, to quote the Eagles, already gone. 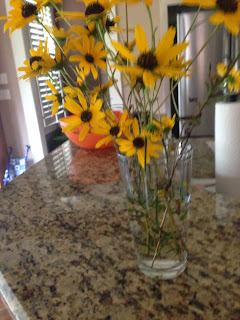 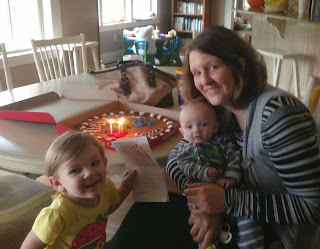 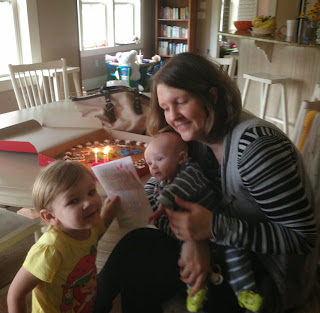 One last blast from the past for you.  Remember one time I mentioned that my dad's hair was fro-ish when he was in high school.  Yeah. 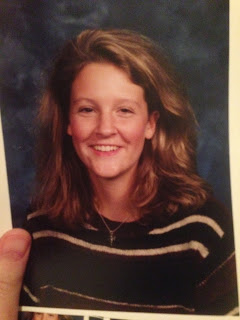 Thankfully, somewhere along the way I decided it's usually worth the effort to wear a smidge of eye make-up, & perhaps most beneficially, some wonderful soul invented the flatiron, a small device that has - - I am not overselling this - - changed my life.

I'll take thirty-three over seventeen any day of the week, & not just because I have my flatiron now.

And now for the introspective, serious portion of this post.  You know, fewer pictures, more words. 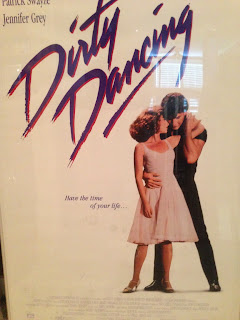 I found this framed poster in the back of my closet.  I will admit that it hung on the wall in more than one of my dorm rooms.  My freshman year in college my roommate & my two suitemates & I spent far more time than is healthy watching Dirty Dancing.  One of us had it on VHS (that's a tape, kids), & it was constantly rerun on one of the cable channels.  I was recently flipping through the channels & saw that The Family Channel was showing it.  What?  I don't know exactly how many times I'd watched this movie before I realized that at the heart of the story is a woman who has an illegal abortion.  That's not as entertaining as the upbeat soundtrack to this film, or the many scenes of Jennifer Grey & Patrick Swayze pulsating together on the dance floor, but that's the truth of it.

In the opening scene, Jennifer Grey's character, who is rather ironically nicknamed 'Baby,' is musing about the summer of 1963.  The entire film is a flashback to that summer, the summer, as she notes, before Kennedy was shot, & a time when abortion was illegal everywhere in the United States.  Baby is recruited to fill-in as Johnny's (Patrick Swayze) dance partner when Johnny's usual partner is . . . what?  What exactly is wrong with her?  I guess at eighteen I was so caught up in the dancing & the cheesy love lust story that I didn't bother wondering why Johnny's dance partner is suddenly unable to perform.  While the word is not once uttered in the film, what becomes apparent is that Johnny's dance partner, whose name is, I believe, Penny, is suffering the effects of an illegally performed abortion.  Yep.  That's not really as catchy as the tag line, "Have the time of your life. . ."  There's not really a song to accompany that aspect of the story.

Even in the nineteen-eighties, Hollywood was hard at work churning out propaganda pushing the liberal agenda they so freely embrace today.  A few themes gleaned from Dirty Dancing: the need for 'safe,' legal abortions (though I'd argue they're not all that safe for the baby) & the fulfillment that comes from sneaking away from your parents while on family vacation so that you can dance suggestively with, & ultimately have premarital sex with, the muscled guy whose summer job description apparently includes sleeping with the guests at the resort that employs him.  Classy.  That's their idea of having, "the time of your life."  Don't take my word for it; this article declares that Dirty Dancing is a, "subversive masterpiece."

It may've taken me three decades, but I think I've gained some perspective.  First, it's a bad idea to hoard things, assuming you can indefinitely use your parents' home as a (free) storage shed because, at the age of eighteen, you lacked the ability to realize you probably didn't need to save every last little memento of your senior year of high school.  When you're older & have time-consuming adult responsibilities, like caring for your own small kids, it's a real drag to have to deal with all your old junk when your parents decide to downsize.  When your kitchen is filled with sippee cups, Hello Kitty plates, & Ariel water bottles, you realize there truly is no need to hang on to a plastic cup that says, "Class of '98" in faded red letters. Or a T-shirt that you got for free for participating in the state tennis tournament in 1997.

Second, develop a critical eye for all that you consume, be it films, music, or books.  The devil doesn't always announce his offensives via an R rating, blatant nudity, or filthy language.  The devil often prods gently, in unexpected places, like a tame eighties movie that became a pop culture sensation thanks to a great soundtrack & Patrick Swayze wearing toddler-sized T-shirts.  I don't think spending my freshman year of college watching Dirty Dancing changed me in any significant way, but I was a bit aghast for a few days after it dawned on me that the whole plot is set in motion by an abortion.  I don't enjoy the movie all that much anymore, because, as with so much of what Hollywood puts out, I have to set aside filth in an attempt to submit myself to their form of entertainment.  It also really bothers me that Hollywood was so sneaky with this one.

Reagan & Henry, with almost no exceptions, if the world suggests you will have the time of your life doing something, do the opposite.  While I want you both to lead happy, fulfilling lives, what matters is not that you always attend the big parties (& I can tell you now, you probably won't), or that you have great dance moves (& I can tell you now, you probably won't), or that you excel in sports (which is genetically possible for the both of you), or that you make a lot of money; all of that can be summed up by another Hollywood film, You Can't Take It With You.  Whatever you do or don't do in this life, every decision you make should point toward Heaven.  More than money or accolades or trophies, or any of the things you can accumulate in this consumer-driven society of which we're a part (T-shirts, cassettes, posters, etc.), I want you to go to Heaven.

On an unrelated note, if you're reading & are interested in a Dirty Dancing poster to hang in your tastefully decorated home, drop me a line in the comments.