Originally published December 9 of last year, it discusses a voting bloc the Pew Research Center has nicknamed the "nones."  The nones are classified as such because they have no specific religious affiliation.  The article contends that the nones overwhelmingly supported Obama in November's election, & that their vote "proved crucial in a number of swing states where the president lost both the Catholic and the Protestant vote by single and low-double digits, but won the "nones" by capturing 70-plus percent of their votes."  Were I a politician who won an election in which 70-plus percent of those with no religious affiliation voted for me, I'd sit down for some personal reflection.  But, that's me.  Iowa based pollster J. Ann Selzer asks, "My question is what is it about having no religion that makes you align so dramatically with the Democratic Party?"


Americans are obsessed with demographics.  You can't fill out a form or complete a survey without checking boxes to indicate your gender, your age range, your race/ethnicity, your marital status, etc.  There is an entire chapter in my public speaking text dedicated to audience analysis on the basis of age, gender, socioeconomic status, religious affiliation, & educational level.  Without knowing anything interesting about me, like my name or my affinity for coffee & Edward Cullen, the fact that I'm a married white woman living in Louisiana tells you how I voted in the last presidential election.  That I've aged out of the 25-29 group is a further tell.  For years, age, race, & gender have dominated demographic chatter around election time, & while these aren't likely to become insignificant anytime soon, the rising tide of the nones is a significant, & alarming, development not only in American politics, but in the scheme of the American story.  I could wax poetic for pages about the genius of the notion of separation of church & state, but the separation of God & man is an altogether different matter that, unlike the fate of the American republic, has eternal consequences.

If you're a Christian living in America, you belong to a small group to whom I think I can accurately give the title, "the luckiest people on Earth."  Christians in America need to realize that we are surrounded by nones.  While I have immense respect for those who travel  to foreign mission fields, they leave one behind when they board their plane.  While every soul is precious, the nones here at home are shaping the culture in which my children will grow & mature & one day attempt to raise their children, & that makes the nones here in America a priority for me.  I am not suggesting you'll see me on a street corner handing out pamphlets, but I am increasingly aware that eyes are always  watching me, & not only Reagan's wide blue ones.  Do what you can, where you are, because it's likely that you regularly spend time with a none, & while swaying votes would be a step in the right direction for our nation, winning souls should be the daily focus of every Christian.  I am convinced the reason the Lord has not returned is to give as many as possible as much time as possible to move out of the none demographic.  He wants every last none.

After the attacks of September 11, Ann Coulter infamously said of those responsible that we should, ". . . invade their countries, kill their leaders, & convert them to Christianity."  I do not assume that evangelism is the answer to all of America's problems, at home or abroad, however, the numbers suggest that as large swaths of the American population happily embrace their none status, our problems grow.  We're selfish, we're lazy, we're unkind, we're shortsighted, & we rarely weigh the consequences of our actions, not thinking of those who will inherit the messes we refuse to clean up, messes we simply ignore as long as our small corner of the world keeps turning.  Perhaps the most important lesson a Christian learns in their journey toward faith is that they were bought at a price; nothing is free, & debt accrued must be paid.  Adopting this humbling mindset would go a long way toward correcting the slog of self-absorption that's draining our nation's resources, both financial & human, as this vortex ensnares increasing numbers of our youth, our future producers.

Reagan, there are certain boxes you'll always check.  You're always going to be a white girl.  Maybe when your time comes we will have relieved ourselves of some of the shackles of political correctness & there will be a "white girl" box in which you can place a checkmark.  I've no idea what the political landscape will look like when you're old enough to vote, & at present I can't in earnest hope you align dramatically with any existing political party, but I pray that not only will the votes you cast, but every step you take, be guided by an unshakable faith not in a higher power, but in the Higher Power, the Lord God Almighty.

To those of you raising young men & women Reagan's age, I know it's hard work.  Every day I tell myself, sometimes over & over again, that what matters most at the end of the day is not that every puzzle piece is returned to its rightful place, or that every book has been reshelved, or that every piece of the tea set is accounted for (we're missing a pink plate that has vexed me for months!); what matters most is that my words & actions, which Reagan sometimes literally mimics, are a reflection not of my frustrations, or lack of sleep, or pregnancy hormones, or human failures, but of Heaven.  I encourage you to do the same, for your children's sake, & for my Reagan's sake, because if you're reading this, it's likely she will spend increasing amounts of time with your child(ren) as she ages.  She will one day be searching for a mate, & I want her to be surrounded by a throng of young men who, whatever else they may be demographically, could never be mistaken for nones.

Here's a few pics of what my little white girl has been up to lately . . . 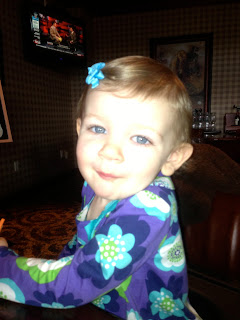 Hanging out with her mom at IHOP: 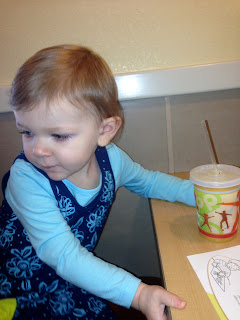 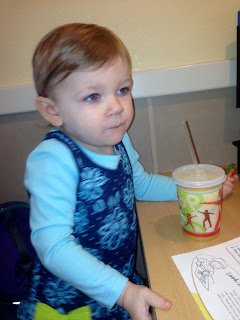 Despite several days of winter weather, we had to get out of the house . . . though obviously from her outfit we ran errands that could be accomplished via a window: 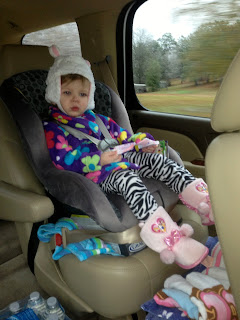 Driving the pink car at the mall: 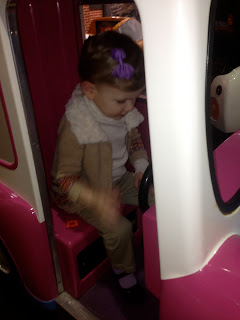 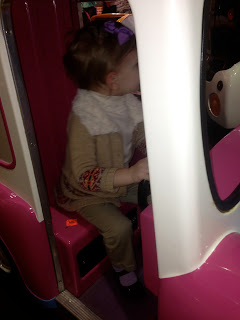 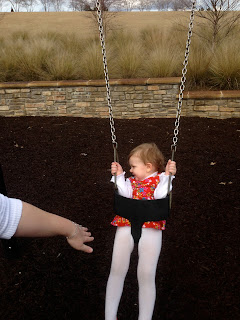 The drive-in in our kitchen: 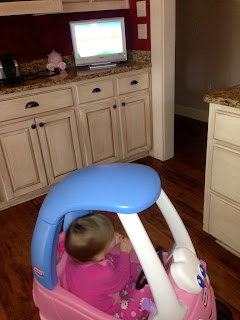 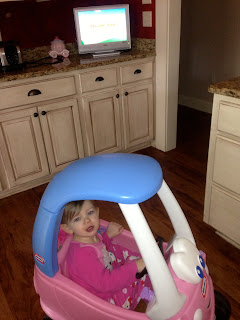 And the obvious go-to when it's cold & raining outside, Orange Leaf: 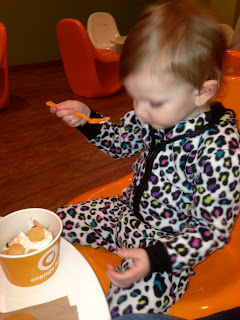 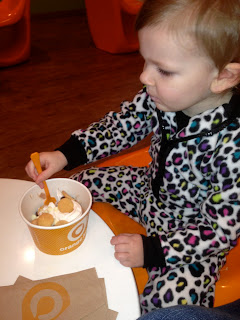 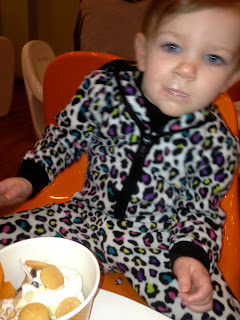