For the months of December & January, my book club read three novels by Richard Paul Evans, who, as it turns out, is a prolific writer, though I was not at all familiar with him prior to reading the first three books in his series, The Walk.  The Walk is followed by Miles to Go & The Road to Grace, & a fourth book in the series is due out this May.

These novels are narrated by a man named Alan Christofferson.  If you read the book jacket for The Walk, you may be tempted to put it down & move on to something else.  As you learn from any summary of the book, in the span of about a month, Alan loses his wife, his business, & his home.  With nothing & no one tying him to his life in Seattle, he instructs his former assistant, who remained loyal to him while his business partner stole their business, to liquidate his remaining assets as he sets off on foot to walk across the country.  The series records his experiences, including the many people he encounters, on his walk.

By the end of the third book, he's made it to St. Louis, MO.  Let me tell you, not every moment in Alan's journey is a page-turner, but I devoured the books in a matter of days because I quickly became attached to Alan (he's a coffee drinker!).  As my (all female) book club discussed the books, we all made similar comments about the details we thought about as we read, & they all had to do with the logistics of Alan's walk, as well as the impossibility of our being able to ever simply, & literally, walk away from it all.  We admitted to wanting to spend some time alone, to "get away," but most definitely in our car.  We concluded that the desire to set off on foot & leave everything - people & almost all material possessions - behind is decidedly a male trait.  We wondered about the paperwork that Alan would have needed to sign to dissolve his business.  We wondered about his wife's medical bills, which are briefly alluded to once in the first novel, but never mentioned again.  In short, we critiqued these novels written & narrated from a male perspective as women.  As in life, there were times I had to keep my mind from haggling over the details the author didn't address in order to enjoy the book as it was meant to be enjoyed.

Authors tend to tell their stories via narrators of their own gender, as is the case with Mr. Evans & Alan.  It's understandable.  There are exceptions, of course.  Jane Austen wrote an early novel, The Professor, that is narrated by a male; critics agree it's not her best work.  Faulkner wrote As I Lay Dying, a novel about one family's pilgrimage to bury their mother that is alternately narrated by various members of the family (including a mentally handicapped son & the deceased mother).  I enjoyed As I Lay Dying in high school; it's a wonderful study in point of view, but as you know, most authors cannot & should not attempt to replicate Faulkner.  For February, we're reading the final two novels in The Hunger Games series.  For many of us it's a reread, & I think we're all realizing a much needed one as the first time we missed many details as we barreled through to find out how the series ends.  Thus, I've left Alan behind for now & am again spending time with one of my favorite narrators, Katniss, created & expertly brought to life by Ms. Suzanne Collins.  I'd forgotten how interesting Katniss is to me.  More on her later, I suspect, as I make my way through these last two books & anticipate the release of Catching Fire later this year, by which time I hope to have sufficiently adjusted to life with two young children that I can manage a night (a midnight release, perhaps?) at the movies.

I posted recently about our news that we're expecting a boy.  Though he weighs a pound or so right now & is totally dependent on me for sustenance, I am admittedly a little intimidated by him already.  I can read books, I can ask for advice, but I can never be more than I am, which is a female.  I prefer female narrators because I can more accurately critique them, I believe, & because there are often details male narrators (& their male authors) overlook that are bothersome to me.  Critics of Hemingway's Catherine Barkley (A Farewell to Arms) fail to realize that many of their frustrations with Catherine stem from the limited point of view (Frederic's) through which the reader has access to her.  You only see her through his eyes, his male, war-weary, eyes that often overlook details Hemingway does clue the (careful) reader into via Catherine's actions & her dialogue.  The entire premise of The Walk series is a male idea; few women could or would handle the difficulties Alan faces by setting out on foot & walking away from it all, & many of the women he meets along his journey highlight this; despite the heart-wrenching stories of tragedy & loss they tell Alan, these women are very much rooted in place & only consider walking away an option in unguarded, fanciful moments.  These women are tethered to their homes, their jobs, their belongings, their children, & they marvel at Alan's free spirit.

Men & women are different, & society has done itself no favors by pretending otherwise.  I'm not talking about the obvious, anatomical, differences, but the intangibles - their emotional & psychological make-up.  It was always interesting to me to sit in my literature classes & listen to my peers' commentary on what we were currently reading (admittedly sometimes I had to bite my tongue . . . hard).  What men & women take away from a piece of literature often varies drastically.  The perspective a reader brings to a text in no way alters the author's original intent, but it certainly colors the experiences a reader has with a text.  The exceptional author will include something for both genders to fawn over - - love that is discovered amidst a raging world war, a teenage girl who discovers her own strength, & eventually falls in love, all while inspiring the rebels overthrowing her country's barbaric government.  I was recently told by a male friend at church that he read all the Twilight books because he's always enjoyed anything that deals with superpowers (the vampires have superpowers).  I was thinking, reeeeally?, but was interested in the male point of view of the books nonetheless. Last week these two headlines caught my attention: Military Leaders Lift Ban on Women in Combat Roles, & then, Unintended Pregnancies on the Rise Among Servicewomen.  Oh, feminism, what have you done?  It's like the young lovers in A Farewell to Arms have melded into one, & not in a Biblical or romantic way.


Ready or not, the boyification in our home begins. 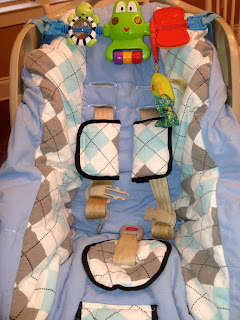 She's all girl . . . & I don't think she's ready.  She assumes her infant carrier has been brought out of storage & donned in blue to enhance her doll play. 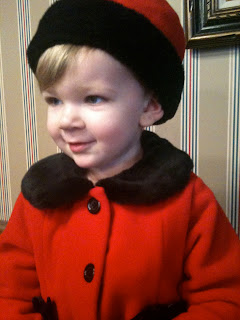