This will be a brief update on what Reagan & I have been doing.  I anticipate it being brief because pregnancy has descended upon me with a vengeance in the past week, & so instead of doing laundry or grading papers or penning lengthy blog posts while Reagan naps, I nap.  These are not catnaps either; this week I've barely gotten her into her bed before going into what I can best describe as a coma.

Last Friday evening, when I still had marginal amounts of energy, my mom & I took Reagan to the Pumpkin Patch at the Methodist Church.  We were meeting a host of folks for dinner at 7:30, so we arrived around 6 to try & get some pics as the sun began its descent.  On a scale of 1 - 10, 10 being optimal, I'd give Reagan's cooperation with the photographer a 7. 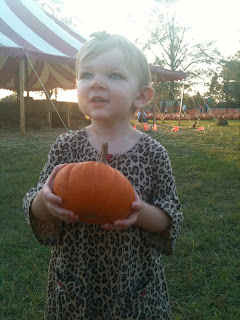 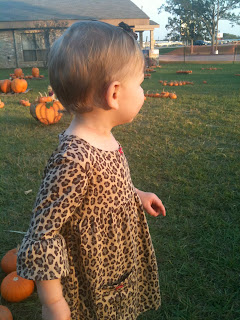 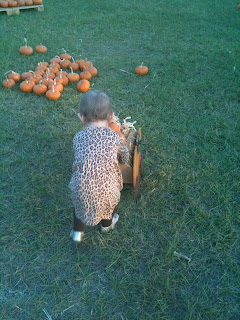 She loved the "baby" pumpkins, & carefully loaded down a cart that I assume was meant for decorative purposes only & took the tiny pumpkins for a ride. 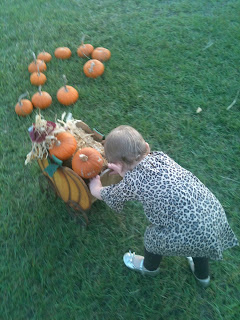 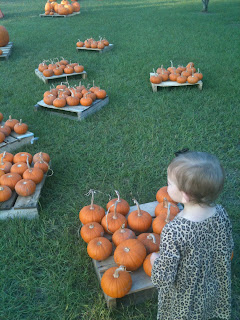 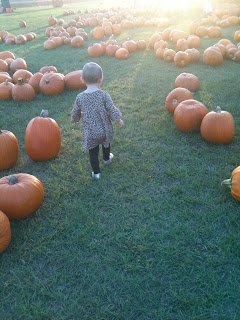 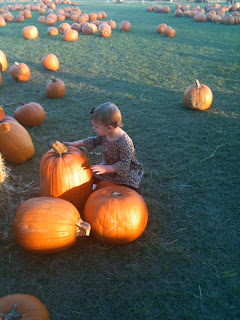 Some failed attempts at a mother/daughter shot . . . 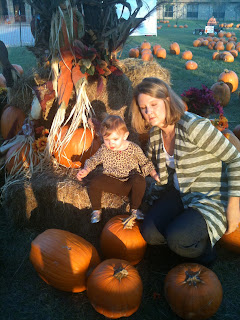 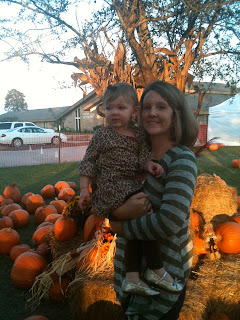 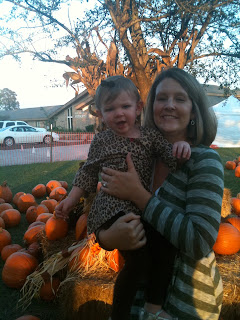 She was skeptical of the rickety bench made of sticks: 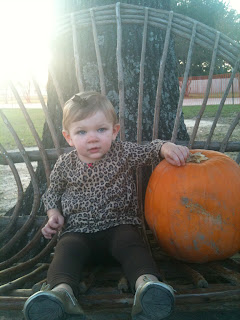 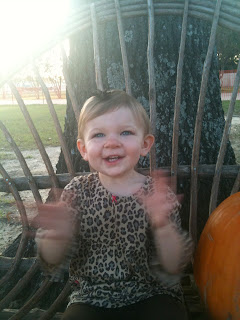 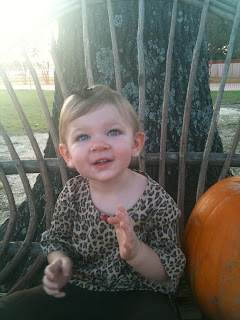 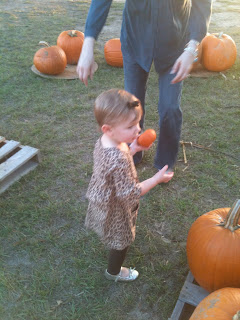 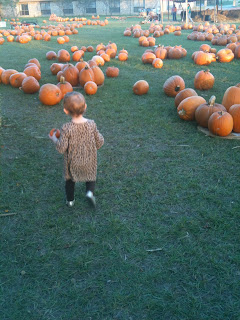 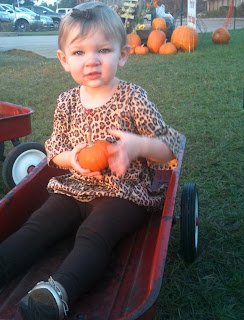 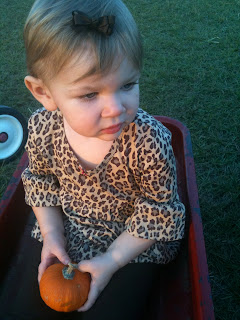 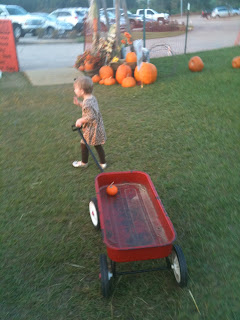 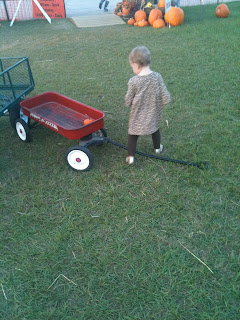 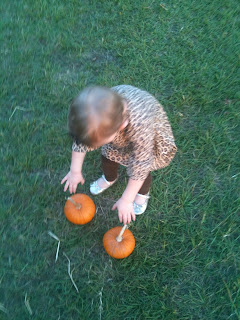 Saturday went fairly well.  I drank coffee, I watched football, did a few things around the house, & was pleasantly surprised that LSU didn't get blown out by South Carolina as I fully expected.

Sunday, the hammer I'd been expecting fell.  I made my coffee before church, & as the Keurig was dispensing it, I realized the smell didn't appeal to me.  I tried to ignore what was happening.  I slapped the lid on my coffee mug, got in the car, & headed to church.  Trey had left with Reagan already, so I was alone in the car to deal with the reality of the situation.  I took a few sips, &, finally, when I was exiting the interstate, admitted that not only did I not want the coffee, the smell was making me cringe a little.

I know this will pass, but it weighs on me every day.  Every morning, my Keurig sits in the corner, dark & powerless, while I shuffle around the kitchen attempting to find something I can nibble on that won't make me gag.  Think about the times someone tells a disgusting story or you see or smell something offensive & reply with, "Gag."  Now imagine you actually do gag at anything & everything.  Water.  Crackers.  Dry toast.  Some of my students at Delta apparently wear perfumes & colognes that are ridiculously strong, so I've recently discovered, & I may have to find a diplomatic way to tell them to stop dousing themselves before coming to class, because really, it's not a bar.

It's been a week of big days for me: Monday was my thirty-second birthday, yesterday was mine & Trey's third anniversary, & today, October 18, marks one year to the day of me laying eyes on our house.  I saw it online, & within the hour my mom & I, with Reagan in tow, had driven out to do a little stalking.  A year & many rancorous real estate dealings later, here we are, all settled, & growing.  The front bedroom I've neglected will soon get some much needed attention, as soon as I know whether to go in the pink/brown direction or the blue/brown direction.  I trend brown when decorating.

Trey suggested we go eat & see a movie Tuesday night, & even arranged for his mom to babysit.  Monday night, after a day of a nagging backache, repeated gagging, & crushing fatigue, I told him I'd prefer to lay around & watch the debate.  I almost regret watching it.  I don't think it will move the numbers much for either candidate the way the first debate did, & it was an ugly display of the interplay of American politics & the American media.  I never again want to see Candy Crowley's face or hear her voice, & it's likely few of us will given she's employed by CNN.  For a network hurting for viewers, she didn't do them any favors in terms of luring new business.  Crowley bothered me more than Obama.  Yes, that's what I said.

I like the Town Hall format.  It's worked well in the past.  The first time it was used, in 1992, the debate featured the first President Bush, Bill Clinton, & Ross Perot.  It was moderated by ABC's Carole Simpson, & as this Mike Flynn article from breitbart.com explains, "In 1992, questions weren't screened beforehand.  Simpson walked through the audience Oprah-style & a producer signaled which person to talk to next, seeking a good demographic mix.  She had no idea what each person might ask."  Flynn, writing before Tuesday's debate but anticipating what was to come, goes on to explain that "The media is in its dying days of relevancy.  They know this, which is why they are becoming such active participants in these debates.  They hope, if they yell loud enough, we will again pay attention to them.  Those days are long past."

Carole Simpson is quoted in this article bemoaning the lack of freedom she had as a moderator, claiming, "I was told in my earpiece by a producer, 'Go interview the lady in the green dress on the left, and now the man in the red sweater.'  I had no control over the questions that were asked, or in what order.  I was like a traffic cop."  Carole, Candy, listen closely: It's not about YOU!  You are not the star, & no one is watching to hear what you have to say, or how you feel about anything.  This was the case in 1992, & it remains the case today.  If you want the floor, run for office.  You should have learned in journalism school that your prerogative is to report the news, not make it.

This year, many of the questions from audience members were clearly selected (by the female moderator) to pander to the supposedly large number of undecided female voters.  You know what is annoying to most women?  Two grown men & a grown woman bickering for an hour & a half, talking over one another so frequently that little in the way of substance could be gleaned from the affair.  I hate the obsession with the clock, which you could see behind both men at times, winding down the way the play clock ticks away at a quarterback's nerves.  Both candidates were, in my opinion, guilty of ignoring the specifics of the question asked of them at times, immediately segueing into their patent stump speech, but Crowley was by far more irritating than either candidate.

Reagan, when you're old enough to vote, let me suggest to you that at this point in an election cycle, there is no excuse to be "undecided."  Women of America, let's get our act together so we won't all continue to be lumped into the category of fickle, undecided female voters & save the viewing public from another ridiculous round of questions attempting to address the issues supposedly important to women.  I am beyond aggravated with the media perpetuated notion that American women live in some gendered bubble, fretting over access to abortion, funding for Planned Parenthood, constantly tabulating their salary v. that of their male counterparts.  To use the word of the day, gag.  If your greatest fear is that you might lose access to taxpayer funded abortions, to you I say what my eleventh grade English teacher instructed our class to do one weekend: go sit outside for awhile & wait for an epiphany.  In fact, stay there until November 7th.  You lost your right to have your complaints about women's rights be taken seriously when you continued to enthusiastically embrace Bill Clinton, an adulterous womanizer whose sins you turn a blind eye to because he supports the right you believe you have to abort your children.  You can't make a case that you care about women's rights while holding Bill Clinton's hand.  It's as hypocritical as nominating John Kerry, one of the wealthiest U.S. Senators, for president, & then assailing Romney for his wealth, which he earned, unlike Mr. Heinz-Kerry.

Well, maybe this wasn't so brief after all.