They divide My garments among them,
and for My clothing they cast lots.

The July selection for my book club is The Robe by Lloyd C. Douglas.  It's historical fiction about a young Roman soldier named Marcellus who is ordered to crucify Christ, & then wins Christ's robe when the soldiers cast lots for it.  Marcellus knows the man he put to death was innocent, and in the years following the crucifixion, Marcellus & his Greek slave, Demetrius, embark on a journey to discover all they can about the man whose robe is now in their possession.

I didn't learn anything new, per se, while reading The Robe (though anyone unfamiliar with Biblical accounts of Jesus's time on Earth, particularly His miracles, would), but I gained a deeper understanding of several things that had previously been mere intellectual concepts for me, such as the significance of Galatians 3:28, "There is neither Jew nor Greek, there is neither slave nor free, there is neither male nor female; for you are all one in Christ Jesus."  Shamefully ignorant of considerable periods of history, I'd never thought much of this verse, aside from it being a nice summation of Jesus's power to unite diverse groups of people.  Reading this book, I gained a very real, very humanized, perspective of exactly what it meant to be a Roman citizen during Biblical times, & the privileges that status afforded a person.  Also, what it meant to be a Jew, constantly on the lookout for a King, a Messiah, who would obliterate the evil Roman Empire, end the succession of increasingly crazed Emperors, & establish His dominance, His new Kingdom.


I've often wondered how it was possible that so many -  Jews, Greeks, etc. - missed Christ.  I mean, the Jews were looking for Him, & had been for years & years, reading & rereading the words of their prophets.  How could they not have realized the Son of God was walking & talking among them; their King had arrived.  Surely had I lived then, I would have known who Jesus was, the significance of His life (& death) on Earth, & devoted my life to Him.  Had a person been so fortunate as to witness one of the miracles He performed, that individual would know for certain they'd been in the presence of Deity, right?  Right?  For the first time in my life, I can say without reservation that I am glad I didn't live during the historical period depicted in this novel.  Obviously they lacked modern conveniences on which I rely, admittedly heavily, & without which I whine, admittedly pathetically.  Aside from a lack of air conditioning, a MacBook, a Keurig, & a car, what a mess of confusion these people had to sort through to try & find truth!

The search for truth as seen through Marcellus's eyes is particularly interesting because, unlike many who sought after Jesus in hopes of a better life, Marcellus is a wealthy Roman.  The son of a Roman senator, he's never wanted for much, & until he irritates Gaius, the stepson of the aging Emperor Tiberius, & Gaius sends him away from Rome to Minoa, Marcellus appears to have never experienced a moment's trouble in life.  Marcellus & the Roman soldiers he commands at Minoa are ordered to help maintain order during the Jewish passover, & it is during this week that Marcellus encounters Jesus, witnesses His trials as Jesus is bounced from Herod to Pilate, & is then ordered to crucify Him.


Douglas does an excellent job addressing the illogicality of Christ & the struggle it must have been to accept who He was, even for those who saw Him with their own eyes.  Marcellus is a practical man; we learn he has never embraced the many Roman gods, & repeatedly the author states that Marcellus is not superstitious.  From an intellectual standpoint, Marcellus reasons, it is simply not possible for a man to turn water to wine; there had to be some logical explanation, such as containers that had once held wine simply flavoring the water.  It isn't possible for a man to lay his hands on a blind man & restore the man's sight.  It is certainly not possible that a man - a man Marcellus watched die! - could be raised again.  It all defies logic, & having never placed any faith in any gods, Marcellus prides himself on being pragmatic.

Even for those who believed Jesus performed miracles, the next hurdle was, & is, accepting the illogicality of His death on the cross.  It simply doesn't make sense.  Assuming He was the Son of God, & He did in fact raise dead men, why then did He do nothing to save Himself?  When the best answer anyone can give Marcellus is that Jesus allowed His death on the cross to proceed to its ghastly conclusion because He loves Marcellus, & the others who were crucifying Him, & wants to one day raise them as He was raised & give them eternal life, you can imagine Marcellus's incredulity.


In addition to Galatians 3:28, the other verse I kept reciting to myself as I read The Robe was Hebrews 11:6, "But without faith, it is impossible to please Him, for he who comes to God must believe that He is, and that He is a rewarder of those who diligently seek Him."  I'd always assumed those who witnessed His life, His miracles, His death, & His resurrection would have come by their faith easily, but after reading The Robe, I realize this isn't necessarily true.  Even as He hung on the cross, His own apostles still didn't understand what was happening, or that He would raise Himself in three days.  I've never questioned that Jesus walked the earth, died on a cross, & rose from the dead.  Never.  I've had the benefit of sane, logical parents & preachers & teachers who've reiterated this truth for me, as well as a Bible (in a language I understand) always at my fingertips.  Marcellus (& every other first century Christian) wasn't blessed with these advantages, & he also had to contend with crazed Roman Emperors who were threatened by whispers of a new king who would reign forever.  Yet, Marcellus believes.  He finds the faith necessary to silence his pragmatism & withstand an onslaught of criticism, incredulity, & mockery.


I sometimes shy away from historical fiction that relies heavily on history, especially the history of the Roman Emperors, which is convoluted.  It usually takes me forever to make it through a book steeped in history because I'm constantly fretting about what is historical, & what is fiction.  I like to read & immerse myself in an entirely fictional world, having no need to stop & consult Google to see if such-&-such actually happened, & who was actually there, etc., etc.  The Robe reminded me that works of historical fiction are wonderful tools to teach those otherwise uninterested in history.  You can learn a lot about the roaring twenties by reading The Great Gatsby, & a fair amount about WWI by reading A Farewell to Arms.  Steinbeck humanizes the Great Depression in The Grapes of Wrath.  History is sometimes too dry for some people's taste, a list of mere facts, but throw in a few interesting characters, ratchet things up with a love story, & history doesn't seem so dull.  The power of historical fiction is that it harnesses not just the facts of a certain period in history, but the culture, via believable characters whose struggles fascinate readers, something that is often absent in history texts.  To me, it's much more interesting to read about one woman who loses her fiance during the Battle of the Somme & then finds love again with a young, injured American than to read statistics about how many men died in the Battle of the Somme.  Similarly, Jay Gatsby brings the Prohibition Era to life better than any history text.


My plug for historical fiction aside, I thoroughly enjoyed accompanying Marcellus on his journey toward faith.  At the end of the novel, Emperor Tiberius dies, his stepson Gaius is murdered, & the infamous Caligula becomes the Roman Emperor.  Caligula demands many of the existing statues of Roman gods & honored Roman statesmen be replaced with his own likeness.  Reading this week's headlines, I thought of the many Roman gods mentioned in The Robe, as well as the humans the Romans idolized, & the humans, like Caligula, who believed themselves (& their horse) to be deity.  We've made some progress, I think, since the time of Caligula, but we continue to glorify humans.  This links to a story about a church group making a pilgrimage to see Tim Tebow in New York.  This links to one of many stories in this week's headlines about Joe Paterno's tarnished legacy, & cries that his statue at Penn State be removed.  Apparently, this was seen flying over the Penn State campus earlier this week: 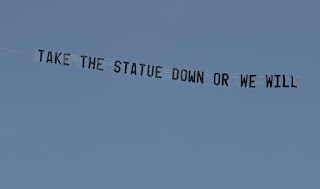 There's nothing wrong with having heroes.  I like Tim Tebow.  I didn't like him much when he was a Gator, but his story since entering the NFL is interesting to me.  I do think people making a pilgrimage to see him are setting themselves up for disappointment, as he's inevitably going to do something to disappoint them (& delight the media who despise his steadfastness in espousing his faith).  As we learn all the time from those we place on a pedestal (& sometimes memorialize in stone), like Joe Paterno, Tiger Woods, etc., etc., no matter how talented or revered they may be, men will disappoint, sometimes in alarmingly shocking ways.

It's human nature to seek faith in something, or someone.  It's the spark of the Divine in us.  So, Reagan, when it comes to placing your faith in someone, as fabulous as we may seem, & as wonderful as you think we are, look beyond your father & me, & beyond your four wonderful grandparents, & beyond everyone else who will come & go in your life, to the only human ever to walk the earth who will not disappoint you, whom death could not conquer, & who will return one day to claim His own, Jesus Christ.