Since she was introduced to food, Reagan has eagerly eaten everything offered to her except green peas.  Watching her ponder the peas for a moment before gagging & allowing them to dribble out of her mouth & down her chin seems quite the appropriate image for today's headline.  I've even tried mixing them in with other foods, but she always seems to know they're hidden in there amongst the delicious fruit she so loves.  She's a smart girl.

Reagan has probably observed her daddy, who eats nothing that is green (unless it's candy coated), & figures if he won't eat his peas, she won't be gagging hers down either.

What interesting visuals from Mr. Obama: forcing vegetables & ripping off band aids, both things associated with children who don't know what's best for them.  If he considers his audience to be the electorate who put him in office, I suppose his examples are appropriate.

You eat your peas, Mr. Obama.  The pea growers of America are asking that you give peas a chance. 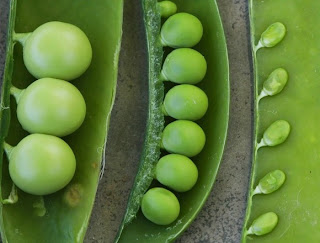 A culinary tip: perhaps they'd taste better if you stuffed them with your proposed tax increases.