What a difference a year makes.  Last year May 4 fell on a Tuesday.  I made a lasagna that day & I distinctly remember gagging repeatedly as I stood at the stove browning the meat, for I was just a little bit pregnant.  I put the lasagna together, put it in the fridge to be cooked later, & then Sophie & I went to the drive thru at Smoothie King.  Early in pregnancy I drank a lot of smoothies; this later morphed into a brief flirtation with snow cones & then a full on obsession with icees that lasted until sometime in September.

As I was sitting in line at the Smoothie King drive thru, I got a text from my mom that said "Mamaw's gone."  The news was not unexpected, so I put my phone down, paid for my smoothie, & Sophie & I drove around a bit while I drank it.  Well, I drove while Sophie lounged in my lap, occasionally sniffing at the styrofoam cup holding the smoothie.  I drove around looking at houses, as is my habit, & likely rubbed my stomach a few times & commented to Reagan (whose gender & name were still TBA at that time) that mama wasn't going to be getting a house anytime soon because mama & daddy had been given an expensive surprise.  I never ate a bite of the lasagna & it was the last thing I cooked for a very long time.

Today, May 4, 2011, I found myself sitting in my Aunt Donna's living room with Donna, my mom, Papaw, Aunt Kathy, & Reagan, who has most decidedly changed a great deal since last May 4.  Both Reagan & I currently weigh about 15 pounds more than we did last year at this time :)  As we were all chatting, Reagan rolled over for the first time.  She is constantly frustrated by her lack of mobility, & I guess she decided it was time she did something about it.

Reagan & I, my two aunts, my mother, & my Papaw visiting in Donna's living room in the middle of the week in May is likely a singular event.  For various reasons, we were all feeling a bit heavyhearted, but also grateful for our blessings, the greatest of which, for me, is a healthy baby girl who can now officially roll over.  It's a snapshot I will carry in my mind for a long time, filed alongside the one of Sophie & I waiting in the drive thru line at Smoothie King.

The first week in May, 2011 is proving to be quite remarkable.  Reagan rolled over, Bin Laden was killed, & I made my bed today: 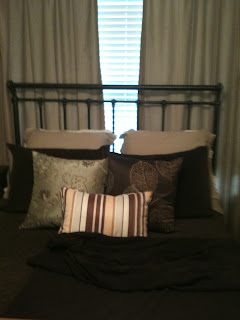 Sadly I have no photos (or video) of Reagan rolling over (yet).
I would definitely release them if I did ;)

Next May 4, I hope to be blogging from somewhere inside my new & spacious home.
Posted by AZ