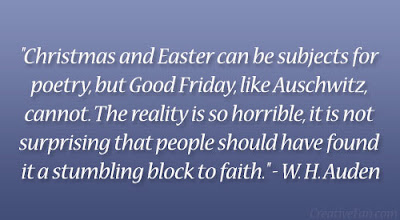 I'm in a bit of a funk. I don't know how long this will be (the blog, not the funk). Yeah, yeah I know I've said that before but maybe I'll surprise you with my brevity today.

A couple of things happened in the last week that will have a direct impact on this blog. First, on Thursday my AP students took a practice AP Exam. They were in my room for three whole hours. During the first hour they read four passages & answered upwards of fifty multiple choice questions; during the remaining two hours they wrote three essays. For today's math lesson: fifteen AP students multiplied by three essays a piece = sad Mrs. Zeigler.

Friday in class I handed the multiple choice portion of the exam back to them & read off the correct answers to a chorus of sighs & groans. I then had them go through the suggested answers to each question & highlight words &/or phrases with which they're unfamiliar. I say all this to tell you that not only do I have a lot of essays to wade through, but on Friday it became apparent there are some vocabulary issues to address, & so I need to say what I need to say today & get back to the business of vocabulary. As a short aside I'll tell you that this AP vocabulary problem is unveiling itself just as the other seniors & I delve deeply into Nineteen Eighty-Four, a book that, among other things, is a treatise on the importance of language.

So, the aftermath of Thursday's Faux AP Exam continues to dominate my life, my time, my thoughts, however I'm going to attempt to step away from it for a few minutes & share a few other thoughts that cropped up Saturday.

Saturday was a big day for the kids. It began early with a meet & greet with the Easter Bunny, followed by an egg hunt. 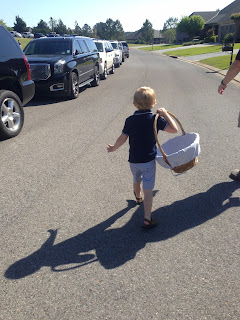 The Easter Bunny, of whom Henry was highly skeptical: 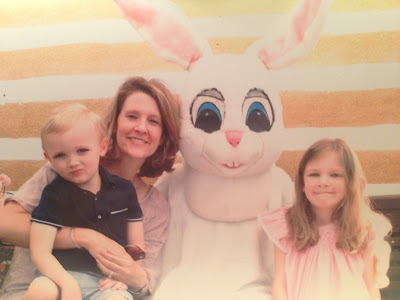 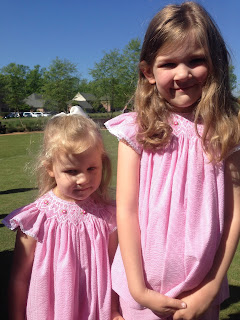 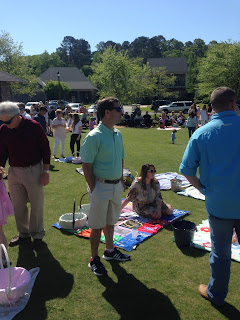 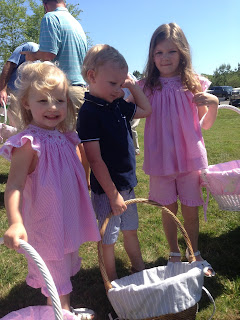 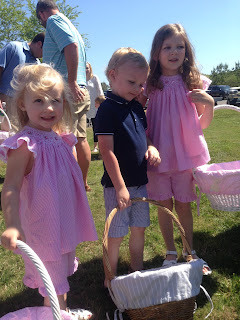 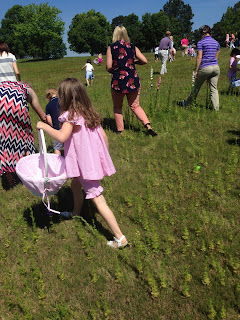 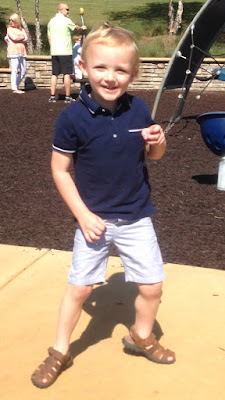 Please take a minute & look at Henry's calves in the above photo. One night last week as he was sleeping beside me in bed I picked up one of his legs to rearrange him & was shocked to feel his calf muscle, which obviously wasn't flexed because he was out like a light. I don't know that I've ever before mentioned this on the blog, but my dad has nice legs (very distinct calf muscles), & I think Henry has inherited Gordon's legs.

After the egg hunt, Trey & the kids & Trey's parents headed to Jackson for the remainder of the day to attend the symphony. I stayed in town to run all the super fun errands I usually run on Saturday, plus stockpile supplies for the Easter Bunny's impending visit to our home & buy supplies for the egg hunts in which the children will participate this week alongside their classmates.

Both of my kids have been instructed to bring twelve plastic eggs filled with non-chocolate candy to school. Once the candy is inserted, the two halves of each egg are to be cemented together using Scotch Tape. You can imagine, what with an evening alone at the house in front of me, how excited I was to spend time assembling all this, especially considering the glee with which I approach all candy-related activities that involve my daughter.

At some point, lost in a sea of plastic eggs & endless aisles of candy, I thought about the above Auden quote. I tried to reconcile Christ hanging on the cross, bloodied & beaten, with plastic candy-filled eggs, Scotch Tape, & fighting with my daughter over carbohydrate-laden candy. I could not reconcile the conflicting images; my anger blossomed & inevitably I did a little bit of crying, much to the delight of the other mothers searching for Easter treasure. 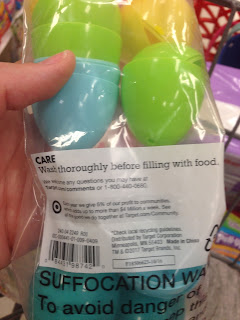 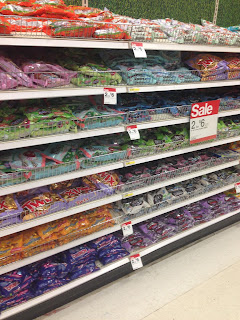 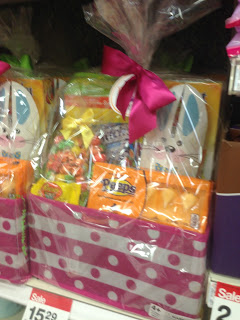 The tears dried up eventually, in part because I stumbled on these, these perfect, zero-carb bunnies that the Easter Bunny will be dropping off this weekend. 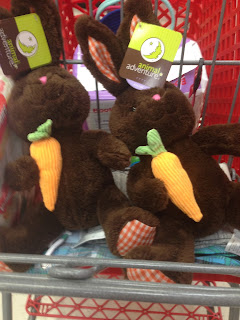 Once I'd completed my chores I thought about going & sitting & eating somewhere all by myself, or going to a movie, but I had essays & vocabulary hanging over my head, & so the inevitable happened & I went through the window at Scott's, got my shrimp & turnip greens, & drove home to eat dinner circa five o'clock like the Mamaw I am. 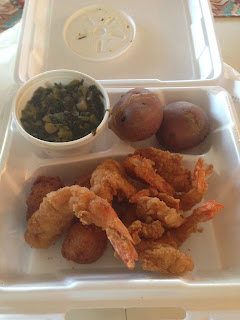 Right after I handed students a copy of The Screwtape Letters this past January I asked them to answer four questions for me.

Do you believe in the existence of an all-powerful, omnipotent God?

Do you believe in the existence of Heaven & Hell?

Do you believe humans have a soul that will continue to exist after their physical body expires?

Do you believe Satan exists? If yes, what do you believe to be his purpose or function in relation to humans?

There were a handful of answers that stood out to me when I read them, & I can recall them almost word for word today, months later. Answering the question, Do you believe in the existence of Heaven and Hell, a young lady said, & I am summarizing, that she has to believe in the existence of Heaven because if this is all there is that thought is so depressing she would not be able to continue.

For some people, "this" is not so bad; for others, this, their reality, is not pleasant. When I was having my little fit in Target on Saturday I thought about the above Auden quote. I read it a long time ago & it stuck with me because I had never before thought of the events of Good Friday as something that would be a stumbling block to a person curious about Christianity, though I have since spoken with people who can't wrap their mind around God sacrificing His Son. I'd certainly never before analogized the events of that day to the horrors of Auschwitz, but it's a fair analogy.

There's a list of things on which I do my best not to dwell because I'd fall in a pit of despair from which I'd never emerge were I to do so. I'm not going to type the list out because then I'd have to do the work of purging the items from my mind the best I can. Like the horrors of the cross & Auschwitz, the items on this list are not suitable subjects for poetry.

The Auden quote also stuck with me because it encapsulates the irony of Easter. Easter, a Sunday each year on which we dress children in their finest & frilliest attire, a day on which even pagans consider attending a worship service, a day on which the entire world pauses to reflect on Christ's resurrection. The gore of Good Friday is nowhere to be seen on Easter, but it is only because of the unspeakable horror that unfolded on Friday that Easter Sunday - that any Sunday - makes any sense. It is only because of the gore of Good Friday, the agony about which most poets & preachers don't often speak, that anything makes any sense.

Why did my daughter's body fail her at three years of age? Why do these teenagers I love bear so many heavy burdens? Why are Christians slaughtered in their houses of worship?

The only way to answer any of the above, the only thing that makes any sense, the only thing that makes the unspeakable subjects bearable, is the truth made possible because of Good Friday: an innocent man died a horrific death so that we might one day escape the ills of this world - & there are so many, many ills - & be reunited with our Father who can & will make all things right. Our bodies fail because they are not meant to last; they will return to dust because flesh & blood cannot inherit immortality, but it is of no consequence because our immortal soul can. Every burden we bear can be traced to one of two truths, sometimes both: we are aging mortals careening toward death who have free will while we are here on earth.

Whatever befalls me here, whatever befalls my children, my parents, my students, we've been offered a way out, & as a woman who recently stood in Target & wept while surrounded by pastel colored marshmallow candy, I am interested in a way out, in a place where there is no pain, no more finger pricks, no more tears, no more death, no more slaughter.

This world & all its pain & problems is not all there is, & that truth, while wonderful, came at a steep, steep price, a price so ugly & unfathomable - a reality so horrible - we don't often think about it or preach about it but it is as much a part of Easter as the message of the resurrection. He only defeated death because He died, & His death was not an easy one.

I hope you have a good week & a pleasant Easter weekend. This week & next are four-day weeks for me at school, & then there's one regular five-day week & that'll be all she wrote for the seniors so it's a pretty safe bet whatever is posted next week & the next will be heavy on emotion & lack structure & coherency.