Having made the decision,
do not revise it unless some new fact comes to your knowledge.
Nothing is so exhaustive as indecision, and nothing is so futile. 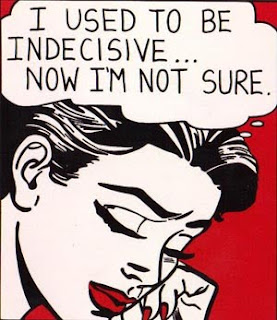 Good morning. This is a bit of an unorthodox post, assuming of course there is any orthodoxy to what you usually find here. You may debate that amongst yourselves.

Many critics believe Hamlet's indecisiveness cost him his life. Is the ghost my father? Do I believe the ghost? To be or not to be? Do I kill Claudius? Okay, but do I kill him now? When he does act rashly, he *spoiler* accidentally kills Polonius.

I think I'm experiencing burn out, or something. Last week's level of tired was on par with pregnancy-tired-level. I was late to book club last Monday night, in part because Trey got home a little late, & in part because there was a wreck in route to the home where we were meeting, & I was sitting in my car experiencing this ridiculous mix of anger, sadness, & frustration, & I almost turned around & drove back home.

I did make an executive decisions to see Dirty Dancing Wednesday night (yes, I did go, if you were wondering). I don't regret going, & as I told Trey, had I not gone to the movie it's not like I would've been catching up on needed sleep. I'd have been doing laundry or packing a lunch or typing notes. I was five or six when the film originally released so I'd never seen it in the theater & it's pretty amazing in the theater. As you might imagine I shared the theater with some enthusiastic fans, including one gentleman who regaled me with trivia about the movie while I half-nodded & buried my face in my popcorn until the lights finally signaled the beginning of the movie.

Reagan's school work is not the most relaxing thing in my world. Thankfully Trey has been working on her math with her. I had no idea kindergarten math could be so stressful but most of the time I cannot even stay in the kitchen while they're at the table working on it. She's a smart girl but she's six & at the end of the day she is tired of sitting & listening & it is difficult to explain to her why she needs to learn how to add & subtract. I can be persuasive, but that's just not an argument I am cut out to make because math makes me crazy.

It's February but I am limping toward May. I need to read a book I really, really enjoy. I need to write. I immediately fall asleep lately attempting to do either. I really don't have the luxury of extending this blog much more because I need to read a couple of chapters of Nineteen Eighty-Four (we're almost done with it!) & also type some notes on, oh, I cannot even recall right now. Something British.

What is below is something you are welcome to ignore or read at your leisure, but if you do read it, share your thoughts. It is the completed opening chapter of a book that has no title. I have a rough outline - on paper! not just in my head - of what I'd like to see unfold in the novel, but, again, making hard decisions is not something I'm up to at the moment & likely I won't have the mental fortitude for that until school ends in May. I have a lofty & perhaps unattainable goal of being about 50 - 60,000 words into a rough draft by the time school begins next August. Most novels fall within the 80 - 90,000 word range, if that helps or is something you at all care to know.

I can easily walk away from what I've written thus far without crying, but I need to decide if I continue with this or move on to something else. What I don't want to do is sit around all summer being indecisive, pick at a couple of manuscripts, have nothing worth much come August, & hate myself. *My plan* - stay with me & don't laugh - is to allow the children to slip into their summer sleep routine that entails sleeping until nine or so. Here's the kicker: I rise around seven & have a couple of hours ALL BY MYSELF. I can read, write, drink coffee, weep openly, clean a toilet, etc. Stay tuned. A year ago I'd have said no way, it'll never happen, but seven in the morning is this whole other thing when five in the morning is when you usually rise.

Couple of things: It's told in first person & I don't think that's going to change. So far I like being in her head, her being Margaret. I don't think her name's going to change either; Edie would've been Margaret but for two reasons. The first time I typed Edie I didn't know if I'd have another female child, & had that been the case, her name would've likely been Margaret. Now that Mr. Henry's here & I've closed up shop, I can use Margaret in a manuscript with no reservations. I also decided on Edie because I needed something Dr. Foster could initially mispronounce (Eddie) early in the novel.

So anyway, her name's Margaret. Margaret doesn't have a last name yet, nor do I know where she lives. With Edie her location mattered because she needed to be far from home, & I wanted her somewhere (1) she'd have a noticeable accent & (2) there'd be snow. I don't think geography will play as significant a role in Margaret's story. I do think there's going to be gunfire at some point, maybe a return of her mother's crazy ex, & definitely a second encounter with Officer Dean circa eight years after the scene in this opening chapter; it's the endless possibilities that lure me back to my MacBook.

Understand that at present I am probably the worst judge of, well, anything. If I have time to pee when I need to during the day I am having a good day. So, if you read, let me know if you love it, hate it, are maybe a little intrigued & would keep reading, hate the name Daniel, etc. Although I can tell you his name will likely be Daniel Dean, should this story continue, because I am not so tired that I can't recognize that alliteration is awesome.