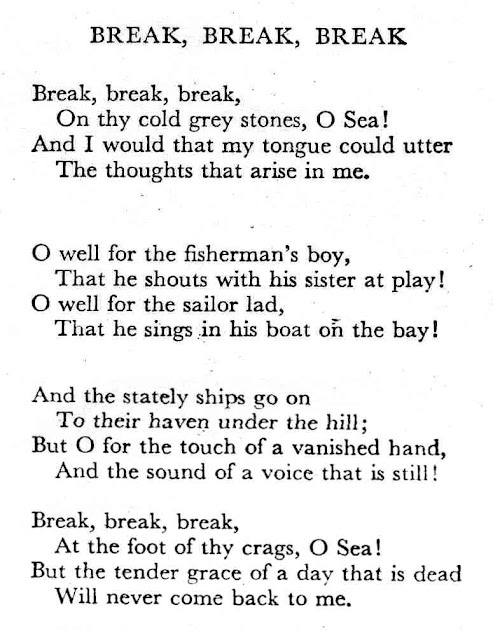 My children & I are in the middle of what's known as Fall Break. I note for my students that in the previous sentence Fall Break is an example of when you do capitalize a season.

Two things have dominated my mind the past few days. One is the above quoted Tennyson poem, & the other is this: 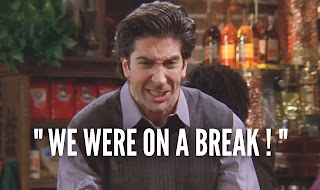 I'm trying incredibly hard to structure this in a way that avoids simply listing all the things that went wrong in the last week (for me & my family that is, to mention nothing of the American Republic circling the drain . . . I mean I can actually hear the sucking noise now).

Last week began with considerable promise. Reagan was to attend cheer camp for an hour after school Monday - Wednesday, which I thought might give me an extra hour at school to grade a few essays. Monday afternoon I did get maybe two essays graded, but between Henry "going to the bathroom" (which translates to playing in the bathroom sinks) twice & making a couple of epic messes in my classroom, Tuesday afternoon I just left with him & went to get a few groceries while Reagan learned the cheers she was to perform at Thursday's pep rally, & then again at the football game Thursday night.

He was thrilled to see this buggy at the Brookshire's nearest the school & now does not understand why we'd ever buy groceries anywhere else. Even while recovering from vomiting (oh yes, just wait) over the weekend, he asked me when we were going to go see his car again. 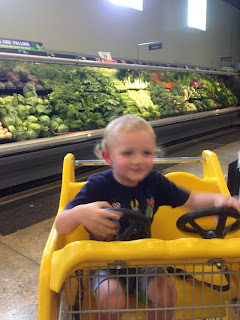 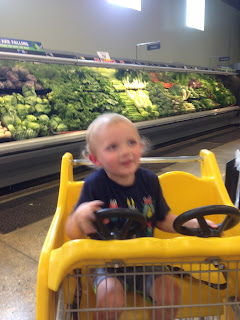 Thursday arrived, as I expected it would. I fell short of my stated essay-grading goal. I fell short by about twenty-five essays. Don't judge me. I made a major mistake in my grading plan. What I like to do is read through every essay once, making no comments & correcting nothing. I like to read them all, see what stands out, send a few gushing emails to students who wow me, & then return to the essays to actually grade them. I'll be straight with you & freely admit, in this most public of spaces, that I like to read them all before assigning any grades because I find my benchmarks that way; there are a handful that sing to me, & they're in my head as I move through the pile, seeing if there are others whispering tunes I missed on the first round. Anyway, this process is not speedy & will have to be tweaked next time around, which sadly is soon (October 26, if you recall, oh blog-reading students).

Mound of essays aside, I was still excited about the day, though no one was more excited than Reagan. Instead of taking her usual afternoon nap at school Thursday, Reagan & a host of her tiny friends performed at the pep rally, which was a precursor to the evening's activities. I don't have any pictures from the pep rally. First, it was a blur of ponytails & bows & I only caught glimpses of her, & also, it was stifling - dead, hot air stifling - inside the gym & I was talking myself out of taking off my shirt & riding out the pep rally in the wife beater that was under my long-sleeved shirt. I did keep the shirt on, but only until I got in my car, because I am a professional.

After the pep rally I handed the kids off to my mom, who was to entertain them for a couple of hours while I raced home to feed the dog. At five o'clock, clad in a fresh shirt, I met my parents, my in-laws, & Trey & the kids for dinner. Understand that when I sat down to dinner, I was looking forward to watching Reagan cheer at the football game, sleeping late on Friday, seeing Bridget Jones's Baby with a friend Friday night, followed by more sleeping in Monday & Tuesday. At this point, I thought the glitch in my Fall Break was the (completely unnecessary!) cancellation of the LSU/FL game on Saturday.

In a span of about three minutes, everything about which I was excited *literally* crashed at my feet. I asked Trey to double check the movie times for Friday night before I texted my friend. He then informed me Bridget Jones's Baby was not playing anywhere Friday night. Is anyone else aghast at how few weeks this film was in local theaters? Sure, it didn't get the best reviews, but if nothing else the glorious way in which Colin Firth has aged ought to earn the movie a couple more weeks on the big screen. I suppose I'll have to wait a few months & then dedicate an entire weekend to being unproductive & watching all three Bridget Jones movies.

I had just sent a text (complete with numerous sad faces) to my friend informing her of the movie travesty when Henry threw-up. You know, no one likes vomit, however I fear it in a way you probably don't understand unless you are diabetic, or you parent a diabetic child.

Inwardly I fell apart. I admit some of my feelings were incredibly selfish. My mind leapt from Henry's vomit to what I felt was inevitable, Reagan's vomit, to nights spent not in my own bed, but in the hospital. Literally within minutes of the first splat of vomit, I was praying for a nurse who could find Reagan's vein on the first stick when she inevitably needed an IV to keep her blood sugars stable in the aftermath of excessive vomiting. I thought about the twenty-five ungraded essays, & the As I Lay Dying test I needed to make out before returning to school. In short, I saw Fall Break slipping through my fingers, cascading ungracefully to the concrete restaurant floor with Henry's vomit. 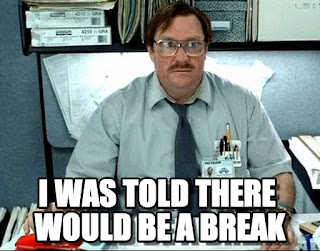 My mother-in-law offered to take Henry to her house. Normally we'd have all gone home, but there was the matter of Reagan's cheer performance. The next few hours are a blur of shuffling Reagan to the right place & receiving text after text informing me of Henry's most recent vomiting episode. Any hope that he'd simply been hot & it was a one-time incident was quickly dashed. I saw people & I talked to people at the game, but I probably had a weird look on my face, &, as a bonus, by this time on Thursday I had completely lost my voice. Not only was I out of my mind with worry, I was having to mime my feelings for people. If you were one of the individuals with whom I spoke (or with whom I mimed) at the game, I'm sorry for whatever I said while internally distressed. To the friend who told me she loved my sexy voice, well, you always make me laugh, & I truly, truly needed the smile in that moment.

I took these of Reagan, who was full of joy & unaware of my inner turmoil. 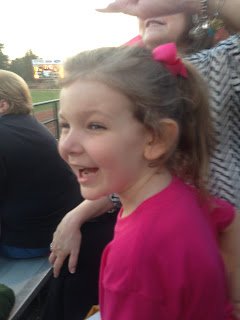 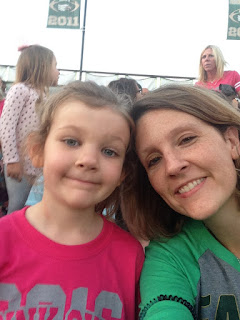 After Reagan's halftime show was over, I took her to the house while Trey went to his parents' house to be with Henry, who mercifully stopped vomiting about one o'clock Friday morning. I did have a break of sorts all day Friday as it was just me & Reagan at the house lounging around, texting Trey occasionally for vomit updates. She colored some. She watched some television. I graded a few essays. I hovered over her, asking her how she felt every five minutes, crossing my fingers & throwing up a few Hail Marys.

Friday night, Trey & Henry again stayed at Trey's parents' house. They came home Saturday afternoon. We all stayed home all day yesterday. I wish I could tell you we are in the clear, but about midnight last night, Trey got sick. I've alluded to it on the blog before, & I won't go into detail about it now, but I think I made fewer noises giving birth than Trey does when he vomits. At present, he is at his parents' house, which I suppose we ought to officially refer to as Quarantine House now. He left early this morning, having last vomited around two-thirty am. Unless there's been additional heaving of which I'm unaware, his stint lasted around two hours, compared to Henry's six-ish hour vomiting streak. Maybe this means the germs are weakening. Of course, this was Henry's first stomach virus, so perhaps that played a role in the severity. The fact that I haven't gotten sick is no meter by which to judge the viciousness of the virus, of course, because I take acidophilus & eat yogurt every day & refuse to take antibiotics unless they cannot be avoided, so I have considerable intestinal fortitude. Yes, I realize I'm tempting fate by saying this. But seriously, protect your gut, y'all. Two years ago, Reagan & Trey fell victim to a virus that sent both of them to the hospital for fluids; I threw-up once & hopped up to deal with the other victims. Ever since I have given Reagan a probiotic daily.

Pray for us; actually, pray for Reagan's little immune system to fight this off. I mean, her immune system is so gung-ho it killed off her insulin-producing cells; you'd think it could fend off a stomach virus. You may or may not see me later this week, dear students, but I fervently hope you do. While I don't relish rising at five in the morning, what I want so much is three days, three normal, ho-hum days, of school. No lice. No vomit. Just early mornings making sandwiches, a little grammar fun with my students, followed by a boring, boring (birthday) weekend.

I was thirty when I began blogging in March of 2011; Reagan was three months old. Today I sign off as a thirty-five year old for the last time. I will, the Lord willing, see you on the other side of thirty-six, which awaits me at the end of this week. I can handle thirty-six, so long as it comes to me alone, bringing with it no pestilence, no lice, & (please, Lord!) no more vomit. And preferably no gray hair, though I'll certainly find any that sprout, given my recently acquired habit of picking through my own hair, & the hair of those I love. Cheers, & farewell, thirty-five.