Consider your origins:
you were not made to live as brutes,
but to follow virtue and knowledge.

Don't worry, I'm not going to begin with a metaphor about page one, or turning the page, or your life being a book & this brand new year being a chapter. I love figurative language more than most people, but I think we've all seen that Facebook post one too many times.

With that said, how about the SEC showing up to play ball in the postseason!?!

It's a good thing I take too many pictures on my phone, otherwise it'd be impossible for me to recall what I did just a few short days ago. Here are the highlights of last week.

We all had dinner at Scott's last Tuesday evening, after which the children & I rushed home, our bellies full of shrimp & turnip greens & ice cream, to cheer the Tigers on to victory. 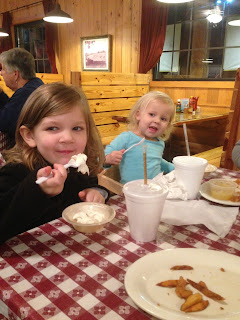 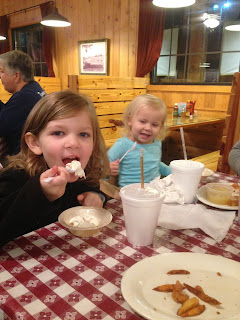 I do recall Wednesday of last week because there was significant structure to that day. I showered & dressed & hauled Henry to my mom so he could play with cousin Maisie while Reagan & I had our teeth cleaned.

To celebrate the awesome things our dentist had to say about our teeth, we ate ice cream cones before rounding out the afternoon at the grocery store. 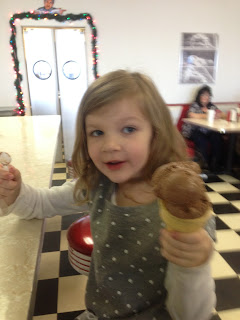 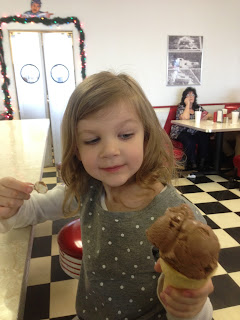 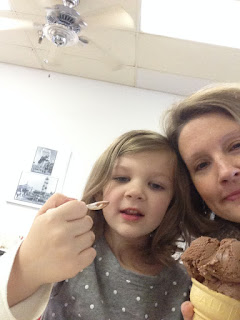 But wait! That is not all we did Wednesday. In the years before the children arrived, Trey & the four grandparents & I (sometimes joined by various of our siblings) often played Trivial Pursuit. Trey owns nearly every edition of the game. When I first knew him, in ye olden days before the Internet, he'd sit & read the Encyclopedia while he ate. Now he uses his phone or iPad to satisfy his thirst for knowledge. It all works out well as he is one of the slowest eaters I've ever met, & so he reads as he eats, steadily growing his vast arsenal of knowledge.

So, determined to make the most of my freshly washed hair & fully painted face, we headed to my parents' house Wednesday night for dinner & Trivial Pursuit. I think my favorite part of the evening was the discussion of teams. Typically the young take on the old, but given Trey's advancing age, consideration was given to shifting him to the parental foursome. We opted to play four on six (four grandparents v. me, Trey, Jessica, Heath, Deni, & Dow).

Much like the Tigers did the evening prior, the young people stormed to victory led by the youngest member of our band of six, my brother-in-law, Dow. He was, as Trey would say, clutch.

Reagan played with the game pieces & Henry fell asleep soon after the game began, but they were with us in spirit. 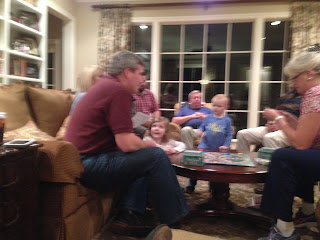 My niece & I took a few selfies during some slow moments in the game. 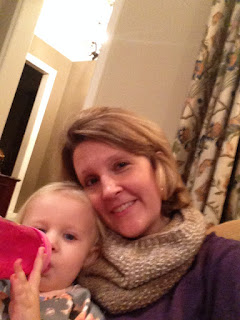 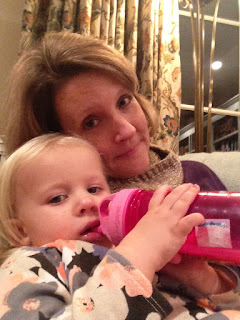 Given the flurry of activity on Wednesday, we didn't do a great deal on Thursday. I drove the kids to my parents' & they played with Maisie while I exercised, & then I watched the only two quarters of a playoff game that were worth watching, the Clemson/Oklahoma first half. I then drove home to be sorely disappointed by the remainder of football played that day. I mean, I had no notions in my head that Michigan State was going to defeat Alabama, but I thought the Spartans might walk away with a teeny bit of dignity. Alas, they did not. My feelings about Alabama aside, at least no one can say one more moronic thing about Iowa or Michigan State.

On Friday, New Year's Day, I removed all traces of Christmas decor from the house. It took me a long time, but it had to be done, & Trey was home (since, as he explained to me from his recliner when I asked him to fix Reagan some tea, he was, "on vacation"), & so I bit the bullet. I was rewarded for my efforts Friday evening when Trey told me he was, "proud of me," because he thought the whole process would, "take me two or three days." I told him that I wanted to get it done so I could enjoy the clean house next week, as I too am, "on vacation." I've yet to figure out who'll fix Reagan her tea when she desires it, but I mean she is tall enough to drink water from her bathroom faucet, &, bonus!, there are no carbs in tap water.

We tie ourselves to the calendar again this week, & I am ready. Reagan is too. She's eager to see her school friends, &, while she hasn't phrased it exactly this way, she's eager to spend a few hours away from me, the carb-counting nag. I am eager to have a reason to get myself & the kids out of the bed & moving before ten in the morning, because while that is fun for a few days, eventually you begin to feel like a slob, & you think that, since you have a closet stocked with fancy clothes, maybe you ought to lose the sweats & join the functional world for a bit, maybe surprise the folks at the drive-thru by showing up in a collared shirt & make-up.

I hope your year has begun well. I didn't make any grand resolutions, as I discussed last week. I've never been one to make new year's resolutions. Maybe I'm a rebel; maybe I'm lazy. We focus a lot on beginnings & endings. It's our nature, being the temporal, calendar slaves we are. There's nothing wrong with calendars & daily planners & making lists & setting goals. Often these make us better people, better wives, better mothers, better teachers, even better Christians. Life is detailed & chaotic. Never forget that our origins are so much bigger, so much grander, than a weekly planner, than a new year, & so is our destination. The life as a book, every year a new chapter, metaphor doesn't gel unless you concede that our story ends when we die. That's not a concession I'm making.

We weren't meant to make resolutions & keep them for a year; we were meant to make our way back to our Creator. Everything about us & about the world around us points to our Maker, & He doesn't operate on the calendar system.

Why do we marvel at sunsets or hang art in our home or stare wide-eyed at our baby's face? Why do we read poetry or a few paragraphs of our favorite novel & weep? Why do we listen to the Hallelujah Chorus from Handel's Messiah & believe we can fly? For the same reason God didn't create a race of identical humans who look alike, think alike, sound alike, nor did He create a colorless, barren world for us to call our temporary home. Even those who deny the existence of their Creator cannot deny the pull to the aesthetic in them. Our desire to create, & to marvel at others' creations, is a bright, flaming arrow pointing directly to our origins, to our Creator.

I got an email in the last week or so from a college friend. She informed me that she has obtained a copy of The Bronze Horseman &, AND, she wanted some information about the book club. She has book club envy & is curious about how we operate. You can imagine the smile her message put on my face. My book club joy is infectious; it's a disease worth spreading.

Why do we desire to congregate & discuss literature? The coffee is good, yes, but I can drink coffee at home all by myself. We congregate to discuss others' creations, eager to hear how the words affected our friends, whose thoughts & knowledge we value. Our origins demand we seek virtue & knowledge, because Him from Whom we originate is the author of virtue, & of knowledge. II Peter 1: 5-7 reads, ". . . add to your faith virtue, to virtue knowledge, to knowledge self-control, to self-control perseverance, to perseverance godliness, to godliness brotherly kindness, and to brotherly kindness love."

Friendship is unnecessary, like philosophy, like art . . . it has no survival value; rather it is one of those things which give value to survival.

I firmly believe God wants us to exercise our minds, to revel in the tapestry of art, & literature, & various other marvels available to us. We know He wants us to be ready to give an answer for the hope that we have, but I believe He wants us to be learned, wise individuals. More than once in the past few weeks my preacher has referenced Paul's declaration in I Corinthians: "I have become all things to all men, that I might by all means save some."


In my mind I will always carry a picture of a much younger Trey seated at his parents' kitchen table, hunched over an Encyclopedia. He still reads a lot, he attempts, at times, to teach himself Greek, & he still loves to play Trivial Pursuit. In this respect, Trey is very much like my father, who reads widely & has a knack for relating almost anything he reads to the Christian's plight such as it is in this, the year 2016. Yesterday in his Sunday morning Bible class, he opened with a discussion of Jurassic Park, the book & the film. He's discussing genetic modification, first as it concerns animals, & next Sunday, the Lord willing, as it concerns humans.


A long time ago I wrote this about The Hunger Games series. Click on it for a visual of Maslow's hierarchy of needs, which I discuss in relation to Katniss Everdeen. What I am encouraging you to do is what Katniss rarely is able to do because her station in life doesn't afford her the luxury,  to read, to think, to philosophize, to add to knowledge. It's what you do, or should do, when you don't have to worry about the basics like shelter, water, & food. We are so abundantly blessed, we ought to dance in the top tier of that triangle every day, & yet, many of us are so busy being busy that sometimes we feel we're playing some twisted version of The Hunger Games, where overlapping schedules & technology eventually eat you alive if the stress of it all doesn't get you first.

Resolve to open your eyes to the signposts pointing to your origins, a God who loves virtue & loves knowledge. I have this thought nearly every time the book club meets, every time I read something that sparks emotion in me, every time I am exercising outdoors & stop & take a picture of something - the sun, a tree, a flower - that catches my eye. Our ability & desire to think on such things is what separates us, His most perfect creation, from the animals. God sings to us, loudly, every day, in a thousand ways. Listen to Him. Look for Him; He is everywhere. Do something, one thing, every day that feeds the innate pull toward Him. Read one chapter in your Bible, read one poem, write something, or listen to Mozart. The surest way to become all things to all men is to broaden your horizons.

I suppose this conclusion has been a long time coming; clearly the moral of today's post is that book club is scriptural. Amen.