Even in the mud and scum of things,
something always, always sings.


There's no other way to begin this post than by telling you that I shaved my legs Saturday.

Last week I alluded to silly superstitions I once had about game day. When I jumped in the shower Saturday morning & grabbed the razor, it was with no forethought, other than maybe, "Goodness, I need to shave."

I suppose you're aware of what unfolded in the world of college football on Saturday. I won't recap it all for you play by play, but to sum up: it was pretty fabulous. Ohio State struggled mightily, USC lost to Stanford, LSU (by which I mean Leonard Fournette) was on fire against Auburn, & the tan man's boys went down at home to the Ole Miss Rebels.


So what does all this mean? There was considerable shuffling in the polls that were released yesterday. The remainder of LSU's regular season schedule is roughly half the current top twenty teams, though I believe I am correct in thinking that LSU does not play Georgia, thank goodness, unless of course the two meet in Atlanta for the SEC Championship.

For the foreseeable future, if you see me on a Saturday, you can just assume my legs are as smooth as a baby's bottom; you don't even have to ask to feel them. Depending on our relationship, that might be weird anyway.

I know you're wondering what in the world I was doing in the shower on a Saturday morning. I'd have preferred my natural Saturday morning habitat, in bed in my pajamas with my coffee & the remote. I actually didn't see one minute of GameDay Saturday. The kids & I were dressed & out the door before eleven in the morning in order to attend a special celebration.


Today, Monday, September 21, 2015, my Papaw celebrates his eighty-ninth birthday. To mark the occasion, the kids & I met a handful of aunts & cousins to surprise him with pizza, cupcakes, &, well, us on Saturday.

I was really throwing it back to my game day superstitions of yore, as not only did I shave my legs, I put on an LSU shirt I hadn't worn since before I had my kids, & I dressed Henry in the LSU jersey I found him at T.J.Maxx, where you can buy cheap jerseys for kids who can't drink water without making a total mess of themselves. 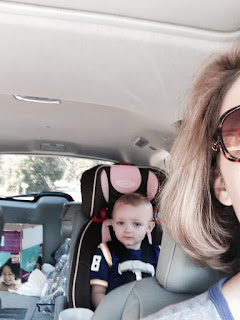 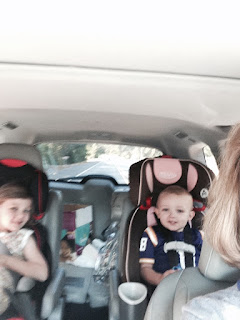 We all hid in my Aunt Donna's pool room (which is a shortened version of "the amazing glass-enclosed space near her pool") until we were in place & ready to spring the big surprise on the eighty-nine-year-old with A-fib. 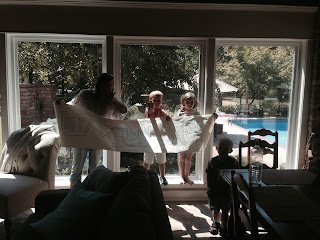 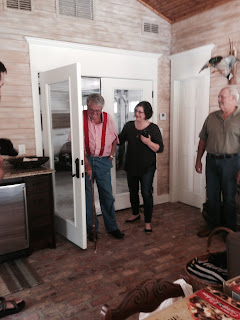 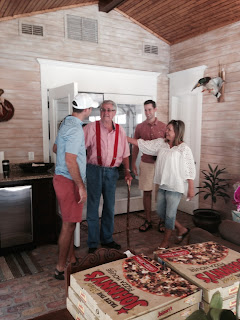 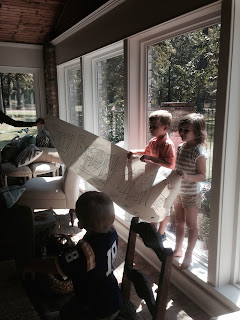 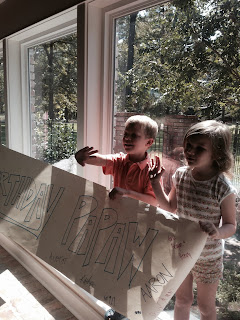 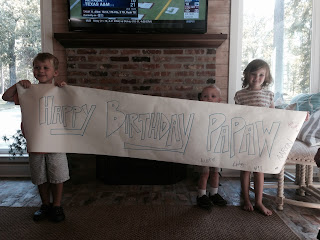 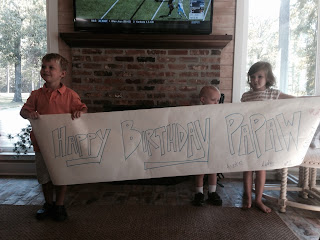 We dried our eyes & hugged it out & then ate pizza before taking the party to the kitchen for cupcakes. 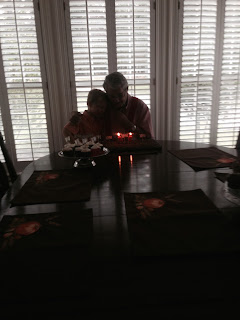 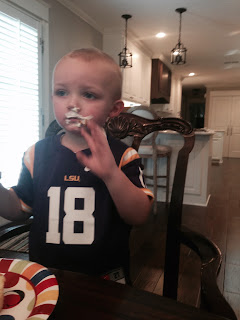 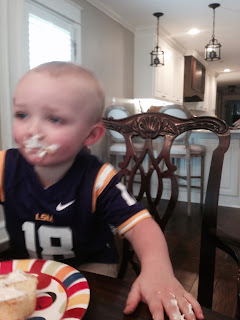 This is Reagan wiping Papaw's kiss off her cheek before we headed home so Henry could nap & my sleek legs & I could sit & watch the Leonard Fournette show. 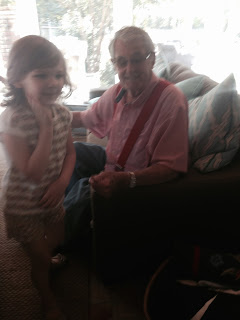 Today is just the sort of day I had in mind when I felt compelled to take the plunge & begin blogging when Reagan was a wee babe. As is the case now, in Reagan's first few months I always had umpteenth pictures on my phone. Often there were things I wanted to say about the pictures, thoughts I wanted to preserve for my future emotionally mature, literate children.

Looking through the pictures from Saturday, I'd like to say this to you, Reagan & Henry:

On Saturday, we celebrated Papaw's birthday. Today your great-grandfather is eighty-nine years old. He was born in 1926. He lived through the Great Depression. He served his country during WWII. One day you'll learn more about both of those periods in history, but suffice it to say, they left indelible marks on those who lived through - those who survived - them.

Your great-grandfather has stood at the graveside of a loved one more times than I can fathom. He has survived his parents, his two sisters, his four brothers, one granddaughter, & his wife, your great-grandmother. I know that he is ready to go, to be reunited with the long list of those he misses.

Kids, I pray that neither of you are witness to times as turbulent as some your great-grandfather has seen, but if you are, I pray you have the fortitude to keep singing, to be a light to those around you no matter the darkness of the circumstances.

I mentioned last week that I am reading Kristin Hannah's Winter Garden. Members of the book club are gradually finishing the book, & I think I speak for the group when I say the book has deeply moved us. I don't know if everyone "loves" the book, but we're sufficiently collectively gutted (& in my opinion one mark of a great book is that it leaves you gutted).

After the death of their father, two sisters slowly learn the truth about their Russian mother, the truth of the circumstances that shaped the stoic woman from whom they've always been separated by an emotional gap they've long given up on closing. There is a scene midway through Winter Garden that confirms what I suspected when I began the novel & learned of Meredith & Nina's mother's Russian heritage. Meredith finds her recently widowed mother boiling strips of wallpaper she has ripped from the dining room walls, muttering incoherently about hunger. Meredith doesn't realize the significance of her mother's actions at the time, but I did, having read The Bronze Horseman last summer.

While it is first & foremost a love story (it is THE love story), The Bronze Horseman also chronicles the struggles of the people inside the U.S.S.R during the siege of Leningrad. Throughout the months - the years - of battling starvation & bitter cold, of leaving her deceased family members haphazardly on the frozen soil (because it is impossible to bury them), Alexander is Tatiana's song. He makes sure she has food, she does not freeze to death, & she keeps her wits about her when absolutely everything screams for her to lose her mind, to quit fighting & sink beneath the icy depths that claw at her daily.

"Tatiana, I love you. Do you hear me? I love you like I've never loved anyone in my whole life. Now, get up. For me, Tatia. For me, please get up and go take care of your sister. Go on. And I'll take care of you." His lips kissed her cheek.

Reading both The Bronze Horseman & more recently Winter Garden, I'd get momentarily lost in the story, & then be gripped anew by the thought that, while these novels are works of fiction, they are historical fiction. It's the historical part that haunts me, that makes me hit my knees. The German siege of Leningrad lasted nine-hundred days, from September of 1941 to January of 1944. Approximately 800,000 people, one in three, died, many literally dropping dead of starvation in the streets. Many of those who survived did so by sustaining themselves with wallpaper paste.

My grandfather was not in Leningrad when Hitler was starving the city into submission, but he has known hunger & war intimately. He's dealt with considerable heartache in his long life. He has seen more death than most. I watched him Saturday with his great-grandchildren, & I thought about all the years between them, hoping the struggles he's known won't be battles my kids face, but also wondering if it's possible to be as humble & grateful & prayerful as my grandfather is without grappling with realities as ugly as those that have left their mark on him.

When Reagan was in PICU & I was coming to terms with her diagnosis, the temptation to wallow in it all was strong. You know what'll give you some perspective on life, perspective on your daughter's diabetes diagnosis? Walking the halls in the PICU. Most of the patients there weren't waiting for their blood sugar to stabilize so they could go home. We took Reagan home, home to a new life of sugar readings & insulin, yes, but home. We were the lucky ones on that hall.

It's easy to sing when the sun is shining. Sing in the shade too, kids. Someone needs your song, is straining to hear it.

Thank you for your songs, songs I know you learned knee deep in mud & scum I cannot fathom. 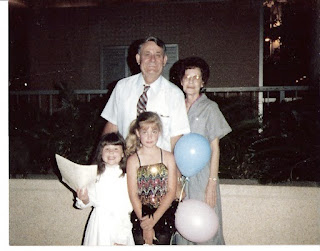 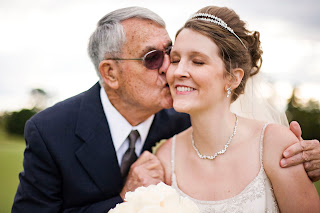 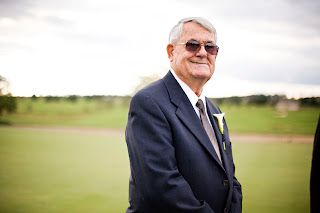 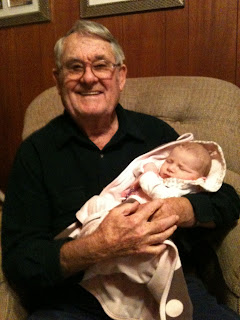 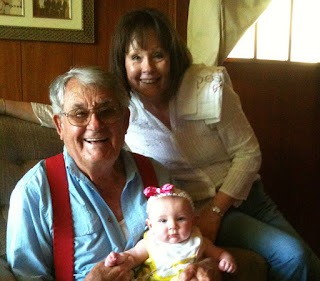 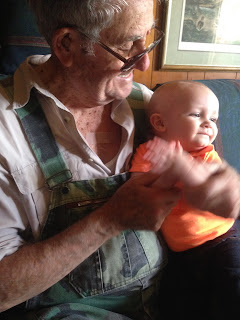 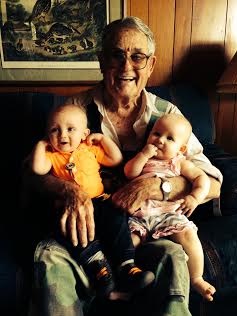 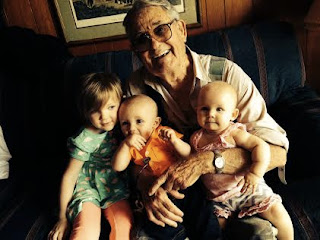 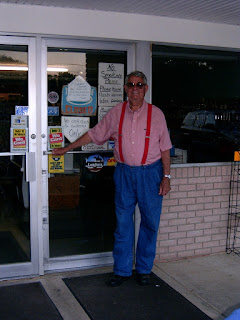 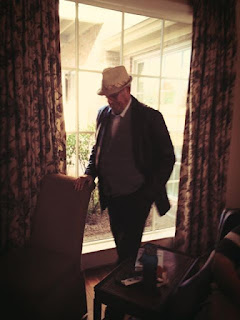