". . . the law begins with language.
Legal language must eschew uncertainty,
and uncertainty thrives when language is gauzy.

May has arrived. April showers bring, well, here in Louisiana, April showers bring May insurance claims . . . and I am not even going to lie to you; with a gaggle of lawyers and a claims adjuster in the family, we're willing to weather the storms, if you know what I mean. Upsize that combo, please, and throw in an extra cookie.

As I type, the sweet smell of freedom is in my nostrils. This is officially the last week of school for me. Last week, classes met on a regular schedule, and this week is finals week. It's funny that I spent last Monday complaining about our horrible, scary weather and the huge stack of ungraded papers I had to tackle, because we've had a stretch of gorgeous weather the past few days, and the grades are in the books. So, today I'm going to whine about the national debt and my thighs. I kid, I kid.


Actually, there are a few things I want to say that have been simmering for quite some time. I began writing a blog in the fall of 2013 when the book club read 1984. Henry was, at that time, only a few months old and constantly attached to me (sometimes more literally than others), and so I never finished the blog. It's been sitting in blog purgatory for some time now. I don't like unfinished things, so I'd likely have gone back to it before now, but I completely forgot about it until a series of events that unfolded over the past week reminded me of it.

I stumbled on the quote above on Twitter, an expansive corner of cyberspace that's littered with the wisdom of those who can solve the world's problems in 140 characters or less. As you might imagine, I find the 140 character limit completely stifling, but there are those who, like the great poets, flourish under the pressure of brevity, and apparently Justice Don Willett, who sits on the Texas Supreme Court, is one of them.

Someone I follow (on Twitter, not in any real life, creepy way) retweeted Justice Willett's words, otherwise they'd never have made their way to my Twitter feed. The long, non-Twitter version of the story is this: A man named Kenneth Sheets, who's currently a member of the House of Representatives in Texas, tweeted Justice Willett (Twitter handle: @JusticeWillett) and asked him if he could, ". . . help me explain to a fellow legislator why the Oxford Comma is important." Willett's reply was, ". . . the law begins with language. Legal language must eschew uncertainty, and uncertainty thrives when language is gauzy." Swoon, right? Uncertainty thrives when language is gauzy. That right there earns him his spot on the Texas Supreme Court, am I right?

I read the tweet and immediately retweeted it. Then, for good measure, I replied, "That's fantastic.  I have a fierce love for the Oxford Comma." 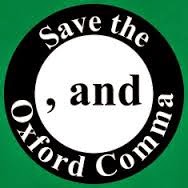 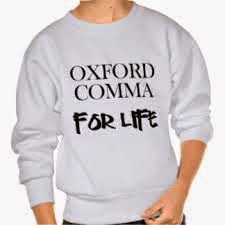 If you're not familiar with the Oxford Comma (or the raging debate over its usefulness), it's also sometimes referred to as the serial comma. It is the comma that comes before 'and' in a sentence that contains a list of three or more things.
Like this: 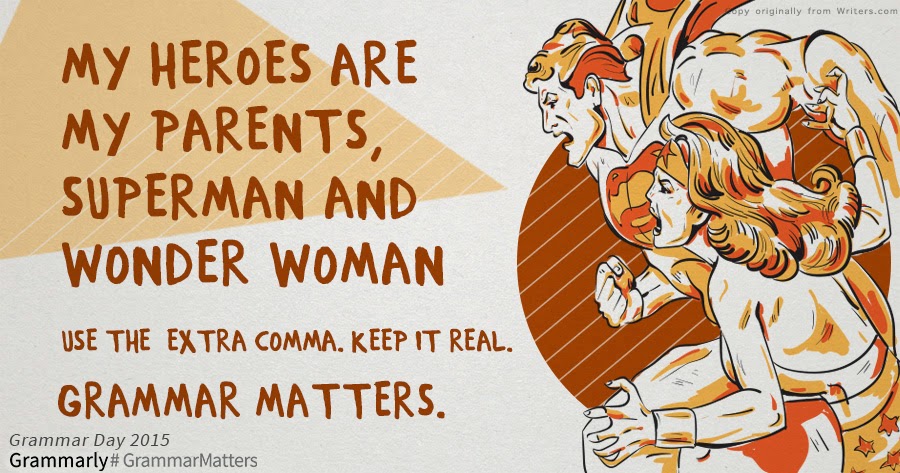 The omission of the Oxford Comma leaves open the possibility for speculation that the speaker's parents are Superman and Wonder Woman. I could give you more examples, but I know you're eager for me to continue with my fascinating Twitter story.

Later that night, I was notified that Justice Don Willett (and Kenneth Sheets) had favorited my Tweet, which is the Facebook equivalent of a 'Like,' which is the real life equivalent of a thumbs up, I suppose. At this point, I further investigated who'd said what during the initial Twitter exchange, and I discovered that Justice Willett is, well, Justice Willett of the Texas Supreme Court. Crazy, I know, because you don't expect to be clicking around on Twitter and bump into a Supreme Court Justice, be it at the state level or one of the big guns up in D.C., but he's legit, and I am following him now, and yes, I spent a little time snooping reading up on his background.

A Texas native, Justice Willett was appointed to the Texas Supreme Court in 2005 by Rick Perry after George W. nominated Priscilla Owen to the federal bench. As you might imagine is the case, he's a conservative, and from what I can tell via his Twitter feed (which is the equivalent of a portal to someone's soul, you know), he's a good dad (took his son to the NFL draft last week), is genuinely interested in the concerns of those pursuing law as a profession, and has a good sense of humor.


So, you can credit Justice Willett for giving me the kick in the pants I've apparently needed for over a year to return to my blog initially inspired by 1984; since I read his tweet, I have been thinking almost constantly about language. If I had to pluck one theme from 1984 and designate it as being the most important theme in Orwell's masterpiece, it would be language, more specifically, the significance of language in shaping not only the law, or culture, but reality itself.


Have you paid any attention to the recent debate over the use of the word thug? This is just one example of how, rather than confronting and honestly attempting to address the many problems in a city like Baltimore, we instead bicker over the appropriateness of the word thug to describe those who set fire to businesses and engage in various other illegal acts. As you might imagine, my thoughts are that if those who rioted and looted in Baltimore are not thugs, then thug has no meaning.


As public discourse over words (which words and phrases are appropriate, which should be banned, which are deemed racist, etc.) unfolds, all I can think is: Orwell, Orwell, Orwell. In the dystopian society of 1984, citizens are encouraged to become fluent in Newspeak, a language designed to restrict both thought and expression by eliminating a slew of words.

But what if there isn't a word to describe the emotion you feel? What if, as is the goal of Orwell's Newspeak, a word like freedom is slowly eliminated from the collective vocabulary? It's much easier to stamp down the masses when you tightly control their language, because eventually, you not only eliminate the spoken word, but the thoughts connected to it. As Orwell explains, ". . . if thought corrupts language, language can also corrupt thought."

Revolutions begin with ideas, and ideas are only as effective as someone's ability to verbalize them, to paint a picture of the envisioned future, a picture that inspires others to join the cause. I've always thought it genius on the part of Suzanne Collins that Peeta Mellark is both a skilled painter and a skilled wordsmith; he paints pictures, both literally and figuratively.

Orwell explained that, "Political chaos is connected with the decay of language . . . one can probably bring about some improvement by starting at the verbal end." Chaotic is a word that describes America at present, unfortunately, but rather than starting at the verbal end in a restorative sense, as Orwell encouraged, and insisting that our leaders call a spade a spade, we watch, dumbfounded and frustrated, as our president refuses to even use the phrase, "Radical Islam," and our media ignores a burning city, opting instead to ruminate on the political correctness of the word thug.

If you think words and phrases are inconsequential, consider these that will forevermore be connected to Ronald Reagan: welfare queen, tear down this wall, trust but verify. These are all phrases his critics decried, but we are in desperate need of a leader who thumbs his nose at the PC police and can wield words as Reagan did, using them to shine a light on harsh realities, to inspire, to intimidate when needed, and to coax a struggling nation to her feet.


The Washington Post recently ran a piece titled, "The 13 words you can't write about Hillary Clinton anymore." Hillary's minions (my word, of course, not the Post's) have vowed to, "track the media's use of words they believe to be sexist code words." Words that are considered sexist code words include (but are not limited to): polarizing, calculating, disingenuous, insincere, and secretive. Let's just gloss over the fact that Hillary embodies each of those words and talk about the fact that men too can be polarizing, calculating, etc., so the argument that these are in any way sexist code words is ridiculous.
Nevertheless, it's quite telling that, with a new scandal erupting daily since Hill announced her candidacy, The Washington Post is running pieces about what words are not to be used to describe the disingenuous, completely polarizing former Secretary of State. She may've deleted thousands of emails that were under subpoena, but don't you dare use the words secretive and calculating to describe her destruction of subpoenaed material, because that makes you the worst of the worst: sexist. The racists of the past seven years are now sexists. Weird how that works, isn't it?

Almost weekly, I run across a news article explaining what new words and phrases have been banished on America's various college campuses. Illegal immigrant is perhaps the most offensive phrase at present. This links to a Breitbart article from a few years ago, the focus of which is the 39th annual list of words banished from Michigan's Lake Superior State University. The list includes selfie, twerking, and Obamacare. Some of the words on the list make you chuckle, while others are obviously included for their political implications. It's funny to me that Obama (and his allies in the media and on college campuses) tried to shake the Obamacare label, because there is nothing more Orwellian than its given name, Affordable Care Act.


Our institutions of higher learning are banning words while our media insists thug is an inappropriate descriptor of, well, thugs, but pro-choice is an ideal description of those who embrace the killing of the unborn. Pro-choice implies there is a choice to be made, you see. Orwell said it best: "Political language is designed to make lies sound truthful and murder respectable, and to give an appearance of solidity to pure wind."

Thank you for the inspiration, Justice Willett. And thank you, Mr. Orwell, for the warning.

I'll close with a nod to my grandmother, Mary Louise Matheny, who died on this date five years ago.  She was a small but fierce woman who did not mince words, sharing all her thoughts with gusto and didactic precision even when her health relegated her to the couch.