There are events that unfolded this past week that I'm going to take a stab at relaying, however, my memories are clouded by a fog of pain that, at present, has not totally lifted, & so you'll just have to take what you can get today.

I think that nothing is so vivid a reminder of what is meant by the phrase "under pressure" as experiencing sinus pressure.  I really don't want to write an entire blog about hating spring, so I'm going to try & avoid doing that, but I'll just say that, unlike many people who complain about cold weather & dull brown grass, I adore winter.  I like winter weather, & I like cozy winter clothes that are needed during said weather.  I like sitting by a fire & reading & drinking scalding beverages while it is absolutely dreary outside.  You know what they say, the weather outside is frightful, but the fire is so delightful, etc.  I also like winter because the grass & the trees & the flowers & all the pollenating beasts are dormant, & thus my sinuses are for the most part dormant as well.

The pressure in my head is directly proportional to the deepness of the green hues that cover my corner of northern Louisiana, & if you live around here, you've likely heard the roar of the mowers lately, because things are greening up & growing.  I spent four or five mornings last week moving in slow motion, trying not to vomit as I stumbled around the house doing the absolutely necessary morning activities before getting back in bed, whereupon the kids & the dog all bounded atop the bed, assuming not just that I wanted some company, but that I wanted wiggly company whose incessant wiggling made the otherwise serenely flat & still surface of the bed undulate in ceaseless, nauseating waves.

The pressure in my head served to amplify by a thousand the usual pressures in my life.  I would have cancelled my classes at least one day last week except that we are so, so behind due to a week's worth of classes cancelled due to snow & ice, & so I had to put on the make-up & the fancy clothes, & yes, it was really awful.  I sounded as bad as I felt, & by Thursday, I was Ariel in that first scene after Ursula has taken her voice & she's attempting to convey to Prince Eric that she loves & adores him.  Yes, I had my looks, my pretty face, but nothing says, "You have too many absences, you're a pathetic slacker, & if you don't nail this next speech, there's no possibility of you passing," like actually saying those words in a clear, stern voice.  People don't take you all that seriously when you sound like there's a wad of cotton stuffed up your nose & your voice breaks like you're a pubescent boy every other word.

I came home from teaching Thursday & attempted some vocal rest, which, as you might imagine, went swimmingly with two young kids in the house.  Reagan & Henry didn't respond to my facial expressions & gestures any better than my students, but my nonverbal attempts to communicate with them sent them into peals of laughter, & I left them in their fit of hilarity to drink hot tea.  That's right, I drank more hot tea than coffee last week; it was that serious.

This is me, attempting vocal rest & relaxation in bed after returning from teaching Thursday.  Reagan thought it was super fun that we were all in the bed together & wanted to take pictures.  Not pictured: Sophie the dog, who was vying for my lap/stomach with Henry.  Sophie lost. 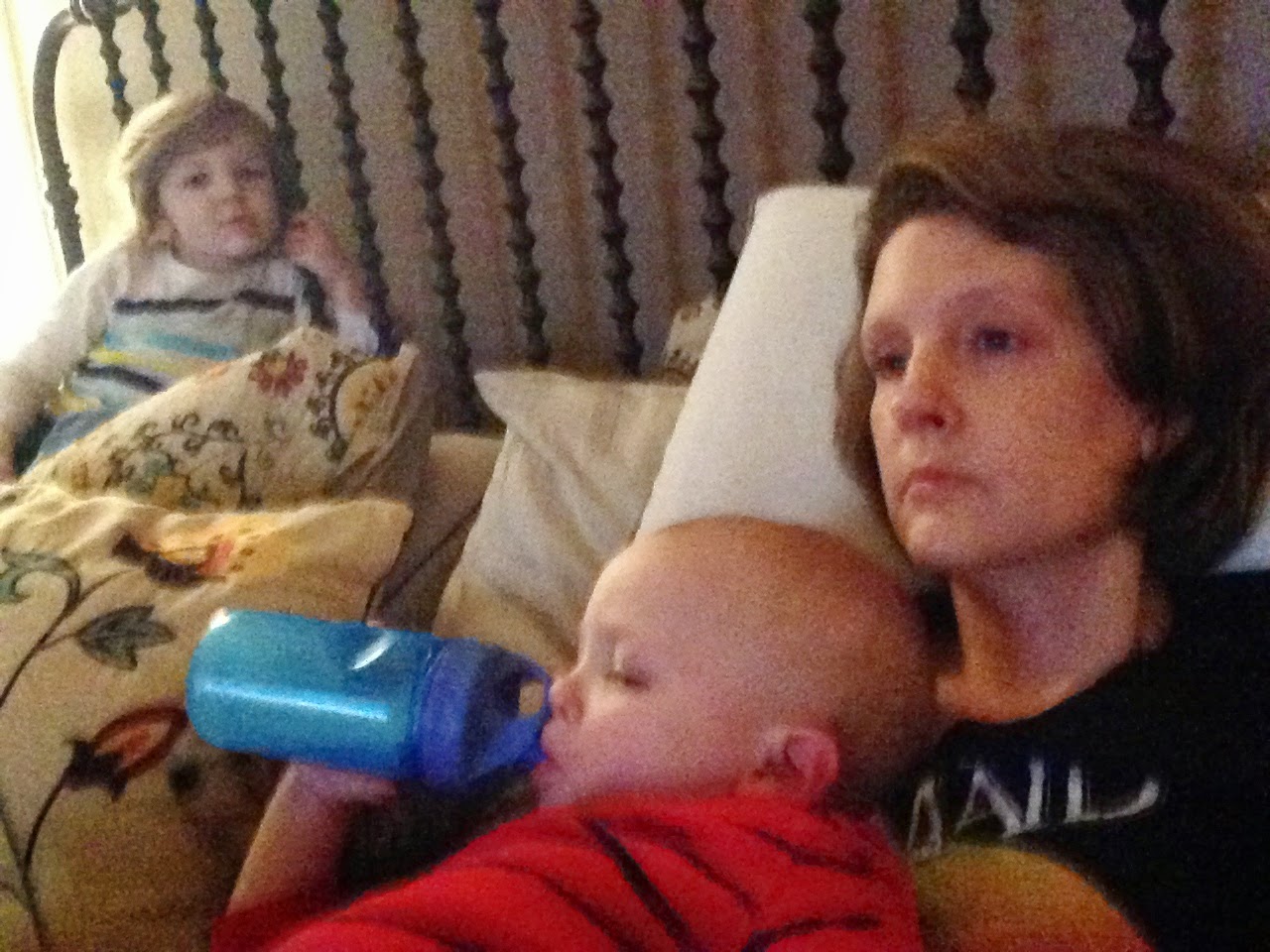 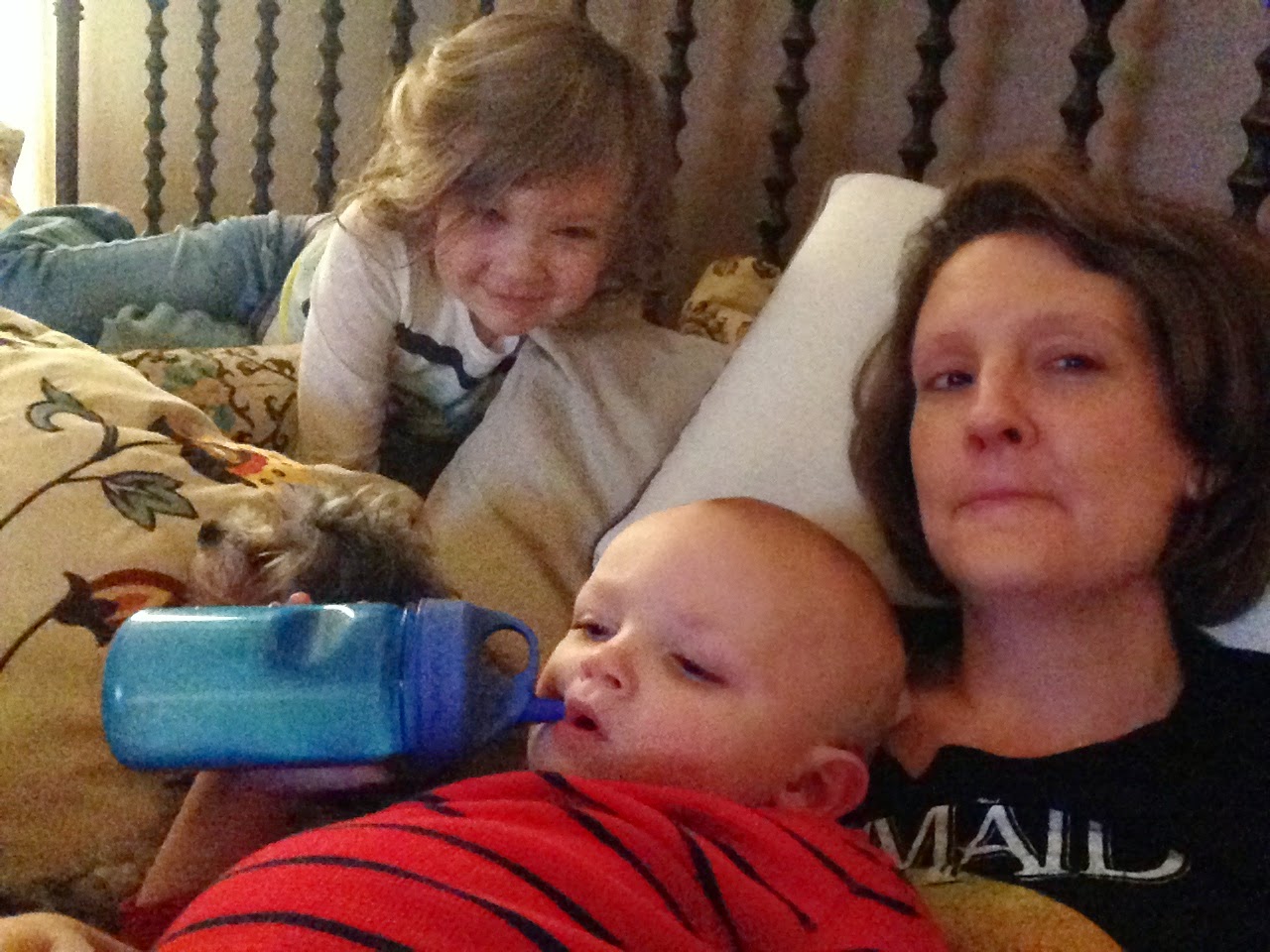 I needed the vocal rest Thursday & Friday because Friday night a situation was looming that absolutely required my voice (it did not involve Prince Eric).  The book club met Friday night to see Insurgent & then discuss The Awakening.  I don't really have much to say about the film adaptation of Insurgent.  You can read this if you're interested in my thoughts on the whole Divergent series, of which Insurgent is the second book.  I have numbed myself to this series, & likely would've waited for the film to hit Netflix were it not for the fun of going with the book club ladies, & of course, Theo James.  He's in the film, mind you, he didn't join the book club Friday night, though that certainly would've given me another reason to sit through the film, & hey, he does have a PhD in Philosophy, so maybe he'd have some intriguing thoughts on The Awakening.

It's fitting that last week ended with the discussion of The Awakening.  If you've never been a part of a book club, you don't know the pressure that accompanies selecting a book.  During my first year of membership, I laid pretty low.  I may've subtly mentioned a few books here or there, but I didn't make any strong pushes for us to read anything in particular.  I dutifully read what was asked of me, shared my thoughts, & drank my coffee.  This last year, I've suggested quite a few we've read, & I felt I may've pushed my luck with The Awakening.  There was some rumbling on Facebook, a few not so vague hints that not everyone was finding it to be the gem of American literature that I do, & so I knew I had to have my voice Friday night.  You can't defend a book you love by appearing to be playing a game of charades with those wondering why, why!, of all the books in the world, you suggested The Awakening, which, admittedly, is not all sunshine & rainbows.

My voice had partially returned to me by the time we all sat down at IHOP Friday night.  I felt better about the book-ambush I was expecting because prior to the movie that night, someone, who shall remain nameless, let me know in a hushed tone that she liked the book.  Further concessions were made over coffee & pancakes, including an admission that, while the story is dreary, the book is well written.  That's basically a summation of every book I've suggested for book club: dreariness expressed in achingly beautiful prose.

Additionally, everyone seemed to agree that it was an interesting book to read on the heels of February's selection, Redemption by Karen Kingsbury.  Redemption is a book about a woman who is desperate to save her marriage after learning her husband is having an affair; The Awakening is a book about a woman who abandons her husband - mentally, physically, & emotionally - when she realizes she married & bore children solely because society expected this (this, & little else) of her.

I'd be remiss to even mention these two books in the same sentence without pointing out that Redemption is a modern work, while The Awakening was published in 1899, so, you know, there are a multitude of factors at play in The Awakening that are non-issues in Redemption.  I may or may not have more to say on these two novels; I don't know yet, because, as I was reminded Friday night by my loving book club ladies, I absolutely have to make my way through the remainder of Gilmore Girls with haste because I have pledged a book club oath to read the seven-book Harry Potter series over the summer.  I think the plan is to read three/two/two (that's books, of course) in June, July, & August.  Pressure, pressure abounds.  Add to all this the fact that I've yet to finish reading Dust (which is not book club material but I do want to know how this series ends . . . though the title Dust is a pretty big hint, I think).  I need to better organize my post-sleeping children nighttime hours & watch one episode of Gilmore Girls & then read for a bit, as opposed to not reading at all & staying up waaaay too late watching four or five episodes of Gilmore Girls.

Saturday morning, I knew I'd turned a corner.  I felt little in the way of pounding when I got out of bed, & only needed about five minutes to moan & hold my head over my coffee before I was busy with the morning chores.  My mom came & got Henry around eleven because Trey & I were taking Reagan to see Cinderella.

Here we are.  I think Trey & Reagan both had a mouthful of popcorn when I took this: 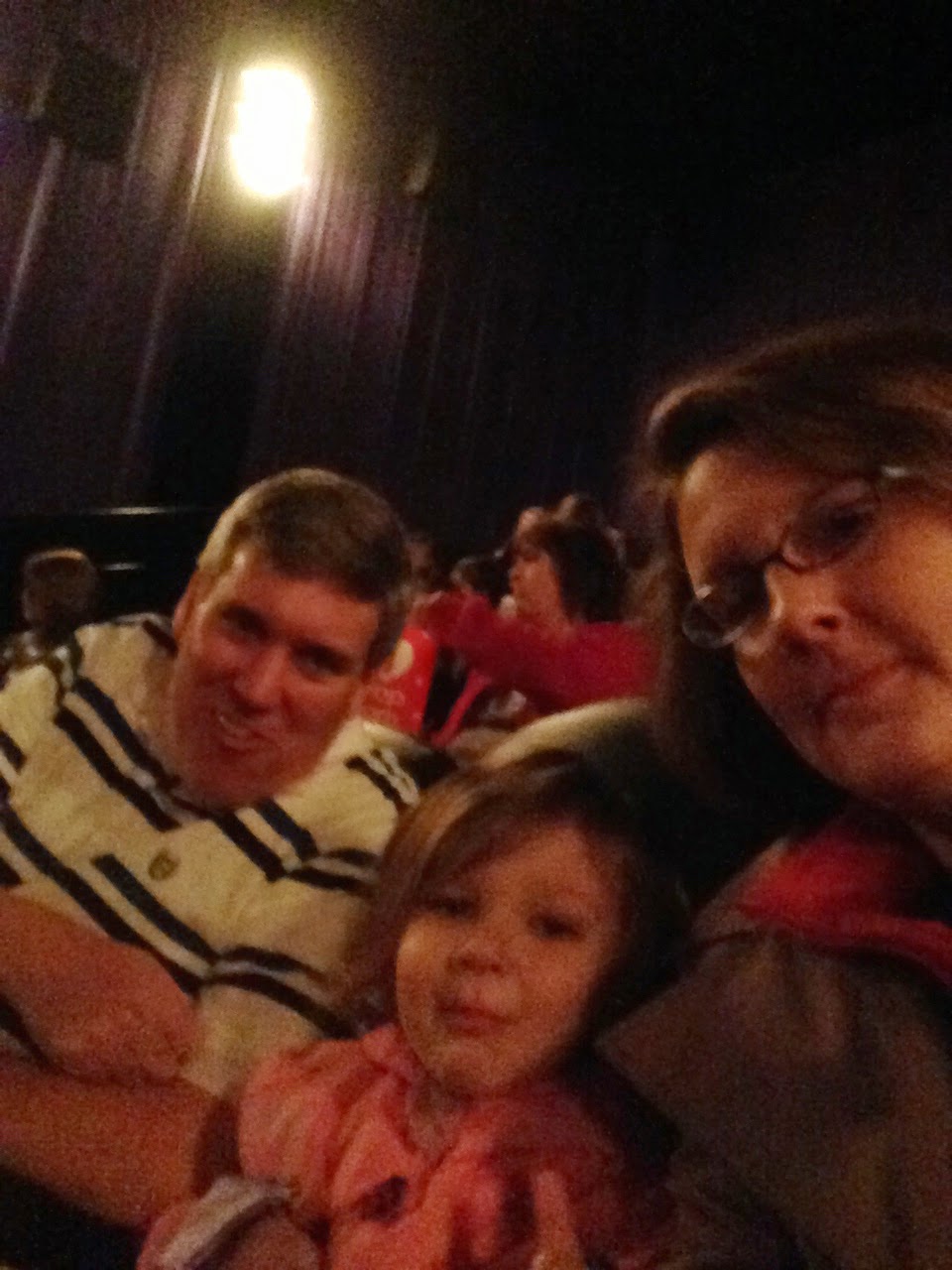 Reagan might be a little young for non-animated films, but I loved it.  As I suppose is fitting for someone who hates spring, I think my favorite part of the movie is Cate Blanchett, who absolutely knocks her wicked stepmother role out of the park.  She is superb.

On her deathbed, Cinderella's mother encourages her daughter to, "have courage & be kind."  With these lines running through my mind, it was especially poignant when, on the way home from the movie, Trey suggested that the next time we take Reagan to the movie, we not go on a  Saturday, because, & I quote, "I hate people."

In Trey's defense, the crowd in our theater was a particular brand of Saturday afternoon awful.  There were a handful of kids far too young to be in, well, in any movie, & they made a lot of noise & traipsed up & down the stairs, & up & down the stairs all during the film.  Trey & Reagan & I, having arrived early like thoughtful moviegoers, sat for about twenty minutes & watched a parade of rude, thoughtless folks climbing over people to claim seats, & then climbing over them again to retrieve their refreshments, & then, believe it or not, climbing over them again because little Sue had to go to the bathroom.  So, don't judge Trey too harshly.

Is it any wonder the woman who hates spring found & fell in love with the man who hates people?    Kids, it's important to find & marry someone who compliments you.  Life is fraught with an array of people & situations that will cause you stress, & as you age, the pressures mount.  Brush your teeth.  Make good grades.  Get a job.  Pay the bills.  Set an example.  Be a pancreas . . . & on & on the list goes.  The person you marry should not be an additional source of pressure; they need to be a valve, a big, shiny new box of Advil Cold & Sinus, if you will.  Click here to read the winding, sordid story of how mine & Trey's seemingly disparate interests converged last summer & resulted in a magical evening featuring Queen & Adam Lambert singing, among others, the hit "Under Pressure."  If you weren't already singing it, you are now, which is only fitting because that song - - along with many other things, both literal & figurative - - floated around in my head all last week.

Rumi once said, "Be a lamp, or a lifeboat, or a ladder.  Help someone's soul heal."  I think he should've added valve to that list.  Find your valve this week.  Better yet, be a valve.  It's a metaphor . . . work with me here.  I've been, as has been noted, under pressure.