On Man and Machines


It is difficult not to wonder
whether that combination of elements
which produces a machine for labor
does not also create a soul of sorts,
a dull resentful metallic will,
which can rebel at times.


Well, isn't it a hoot that last week I blogged about time, oblivious to the fact that in less than a week, my absolute least favorite day of the year would be upon me.  It really snuck up on me this year.  Don't we usually forfeit our hour later in March?  Isn't the year's most harrowing Sunday morning closer to Easter?  That this new week began with a distressing reminder that we're all slaves to the clock is just the cherry on top of what has been a long week filled with what I can only describe as machine angst.

Last Monday morning as I sat at our kitchen table sipping my coffee & sharing deep thoughts on time with you, our refrigerator was over in the corner breathing her last.  I knew she was dying.  Trey had opened the fridge on Saturday afternoon & asked if one of the kids had left it open because the digital readout indicated it was fifty-five degrees in the fridge.  I didn't think it had been left open as it's equipped with this nifty pinging indicator that kicks in after it's been open for more than two seconds (ping ping ping ping . . . Henry close the fridge! . . . ping ping ping ping), & the annoying sound hadn't alerted us to an open fridge all afternoon.

At that point, I think we both knew what was happening, but neither of us wanted to admit it.  The digital readout slowly crept up, up, up, & as I type, it's a balmy seventy degrees in our fridge.  What? you ask.  We haven't had it serviced yet?  Why no, no we have not, which is why this blog may be terse & laden with the hot-fridge rage that's now completely consuming me.  Just wait though.  This story gets better.

Tuesday night, after our tenth argument discussion re:the fridge situation, I waltzed into the laundry room to throw a load in the washer, which I assumed was empty because I hadn't washed anything in a day or so & the chances of anyone else in the house using the washing machine are pretty slim.  Picture me shocked when I opened the washer & there, plastered to the sides, was an assortment of Trey's boxers, socks, & white T-shirts.  I don't know how long they'd been in their plastered-beginning-of-mildew state because I didn't put them in the washer.  Now, I know.  I know it's just fantastic that Trey starts a load of clothes, but, the laundering process doesn't end there.

To avoid mold & mildew, & to free up the washer, I transferred everything to the dryer, turned it on, & then did what I'd intended to do, start a load in the wash.  Picture me perplexed when, an hour later, I opened the dryer to find Trey's things still fairly damp & noticeably cold.  At this point, it was about eleven-thirty in the evening.  I thought maybe I was just tired & I'd done something wrong, so I started the dryer again, but I knew.

I debated telling Trey, finally deciding there was really no point in delaying it, because the only other midnight activity on Tuesday's agenda was spreading each of Trey's cold, wet pieces of laundry all over our cabinets & table.  Miraculously, the dryer situation was resolved by Wednesday afternoon by a kind man who replaced something or other that is crucial to the dryer's production of heat.  Unfortunately, the kind man didn't know how to fix the fridge.

A Sears repairman was scheduled to look at the fridge between three & six Wednesday afternoon.  You're simply not going to believe this, but not only did no one show, no one called to let us know no one would be showing.  On Thursday, Trey received an automated message requesting that we reschedule, which we opted not to do.  My understanding at present is that a Basic repairman will be here at some point Tuesday.  A more specific time is to be determined & relayed to us Tuesday morning.

We're essentially camping right now, as there's a large ice chest on the back porch that contains milk for the kids.  Every time I open the porch door to retrieve milk (first checking that there are no golfers in sight to witness my state of half-dress), I get a little angrier.  I worry the milk isn't staying cold enough; I've smelled so much milk in the last week I don't know if my nose would be able to tell if it was bad.

The whole situation is throwing my entire day off.  I usually make a shake in the morning with a sliced banana & a huge scoop of Greek yogurt (which, if you don't know, has a lot of protein in it).  For over a week now, I haven't been able to make my shake, & the days are just unraveling from there.  If you're curious, Greek yogurt needs to maintain a certain consistency to remain functional & edible, & an ice chest is no friend of Greek yogurt.  Actually, in the interest of full disclosure, the first thing I do when I rise is curse the hot fridge make a cup of coffee, then I make the shake after I've been awake about an hour or so, & drink another cup of coffee with the shake.  Are you fascinated yet?

As you might imagine, I am tiptoeing around all of our appliances.  I whisper kind words of encouragement to the dishwasher, promising not to turn her on until she is full to the brim. Fortuitously, Trey & I had plans Friday night that didn't involve the kids.  We all needed some time apart; you've no idea of the wedge a hot fridge can drive between family members, particularly when two of them demand the milk.  We attended a murder mystery dinner theater with a group of lively young lawyers who're coworkers of Trey's.  I paid a little bit of attention to the show going on around us, but I was so, so happy to be freshly showered & eating a steak dinner with a table full of people who could all feed themselves that I could've cared less if there had actually been a murder.

The four grandparents took the kids to Cracker Barrel Friday night, which is where my mom took these pics below.  I went back through the week in pics on my phone & realized one of life's truths: when it's seventy degrees in your fridge & you've got a smell problem developing in your kitchen & your kids do not want tepid water with their breakfast, you don't pause to take many pictures. 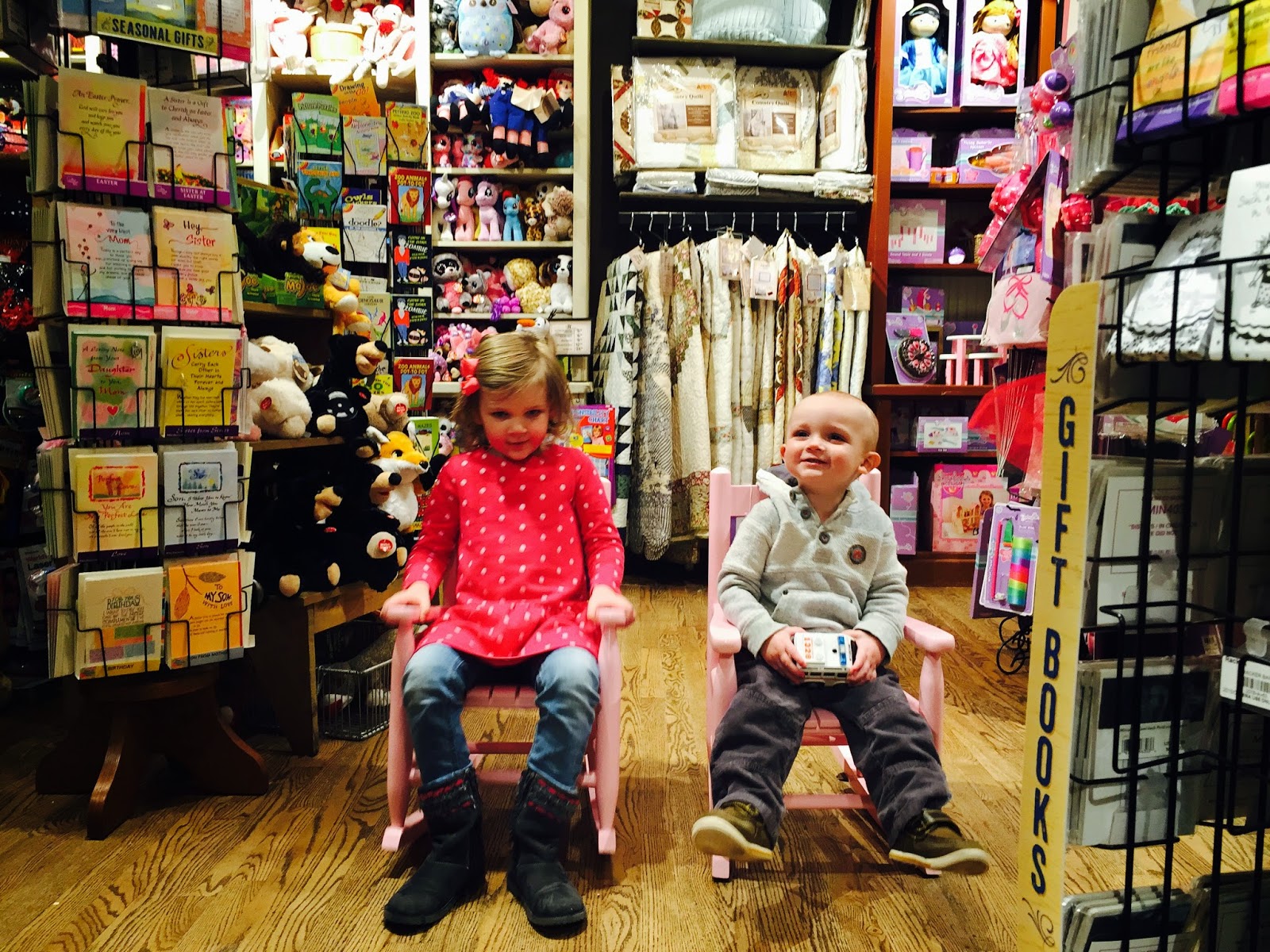 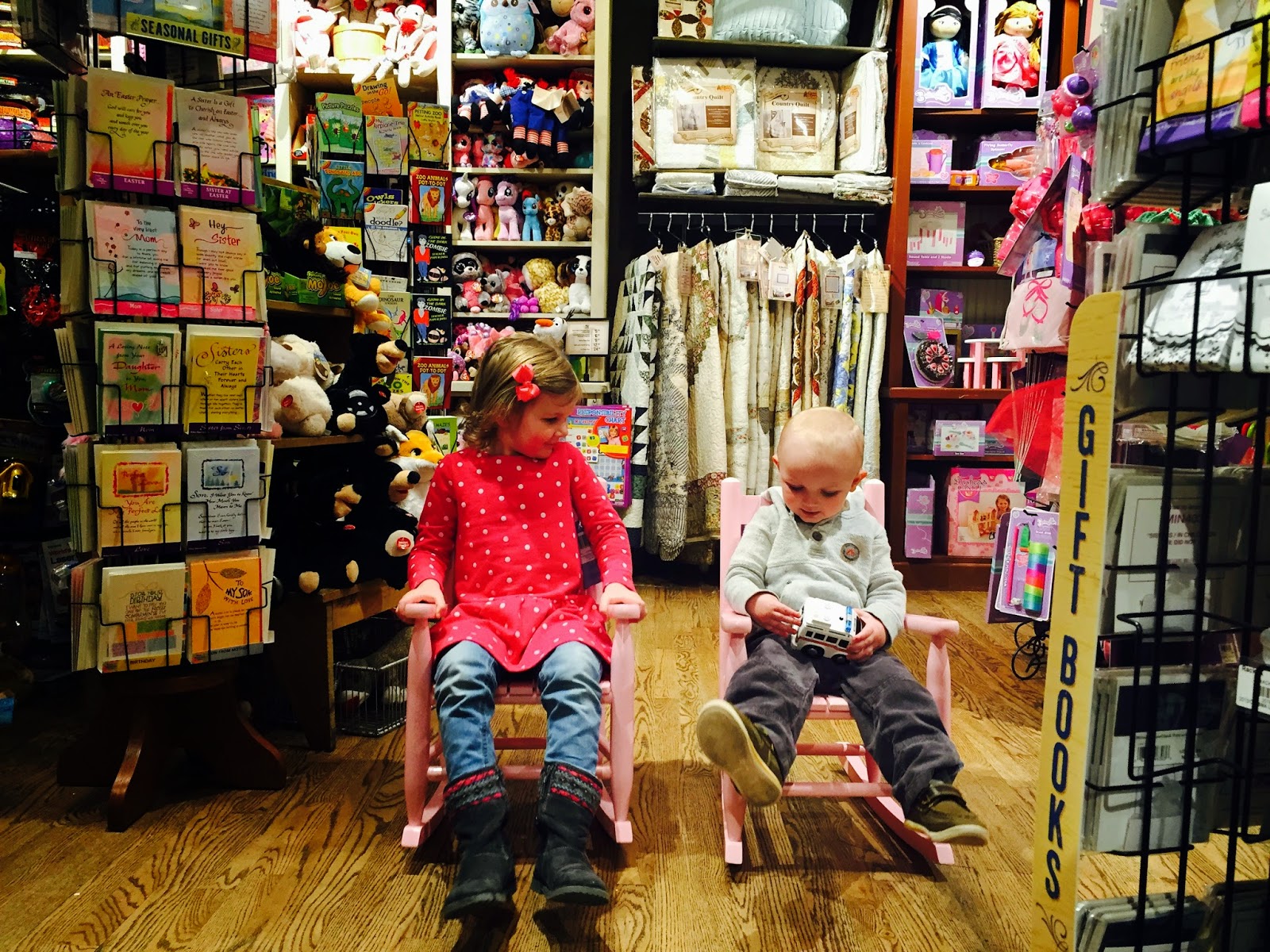 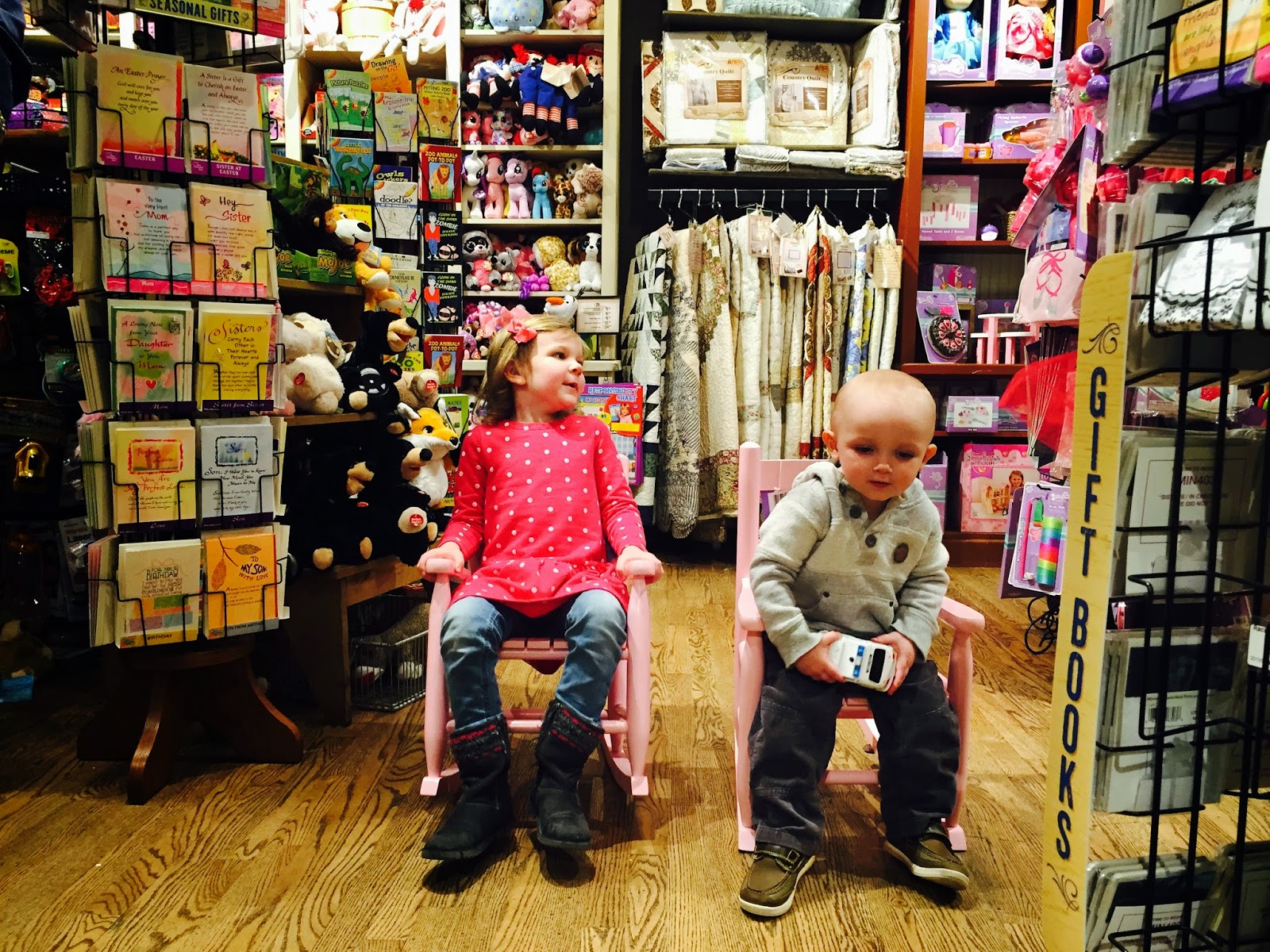 Perhaps the true cherry on top of last week's machine mutiny was the demise of Trey's recliner.  Trey likes to rock . . . as in, in a rocking chair, not like Gene Simmons/Kiss rock.  Many moons ago when he (that's Trey, not Gene Simmons) was a senior in college, he inherited a leather rocker/recliner.  He rocked his way through law school in this chair, he's rocked the kids in this chair at all hours of the night, & he ends each day with some quality time in the chair.  He often begins his day in the chair as well.

The chair is attractive enough, or was in its prime.  My main issue with it is that it's SO LOUD & SQUEAKY when someone is rocking vigorously (which is the only way Trey knows how to rock).  I cannot empathize with the need to rock, but if he has to do it, it need not rouse the neighbors.  I am not a rocker; I love stillness.  I don't even like a fan on when I'm in a room, so thoroughly do I revel in the absence of motion.  As it is recorded in Mark 4:39, Then He arose and rebuked the wind, and said to the sea, "Peace, be still!" and the wind ceased and there was a great calm.  Be still.  Great calm.  These are among my current favorite phrases.

On Saturday afternoon, Reagan brought me a screw & said she found it on the floor by daddy's chair.  Duly noted,  I thought to myself as I set the screw aside.  I didn't get excited, as the chair has hit snags before, & Trey's always been able to fix it.  Upon inspection, Trey declared the chair to be broken beyond repair, at which point I stepped into another room & calmly & quietly pumped my fist, & maybe did a little dance.  Then I texted Trey's parents, who've tried to get him to buy a new chair for quite some time now, because not only is his recliner loud & annoying, no one finds it remotely comfortable . . . no one but Trey, that is.

My favorite respite from the appliance upheaval has been my friends Lorelai & Rory, also known as the Gilmore girls.  Netflix has not failed me.  Another week has passed, & another season is down.  Season two is good; there's a reference to Clarence Thomas's famous stoic silence on the bench in one episode (that is in no way demeaning to Justice Thomas!), & Luke's uncle dies in another episode & so Luke sheds his typical flannel shirt & wears a suit that Lorelai & I simply could not ignore.  Good stuff.

Henry usually joins me for an episode or two at night.  He's a big fan of the song that plays during the opening credits . . . If you're out on the road, feeling lonely and so cold, all you have to do is call my name, and I'll be there on the next train . . . Where you lead, I will follow, any - anywhere that you tell me to, If you need, you need me to be with you, I will follow where you lead.  He's very cute be-bopping to the song, & then he usually makes it through about five minutes of the fast-paced dialogue that typifies the show before he's out for the evening, at which point I pause the show & go make some decaf, scowling at the fridge before heading back to the bedroom. 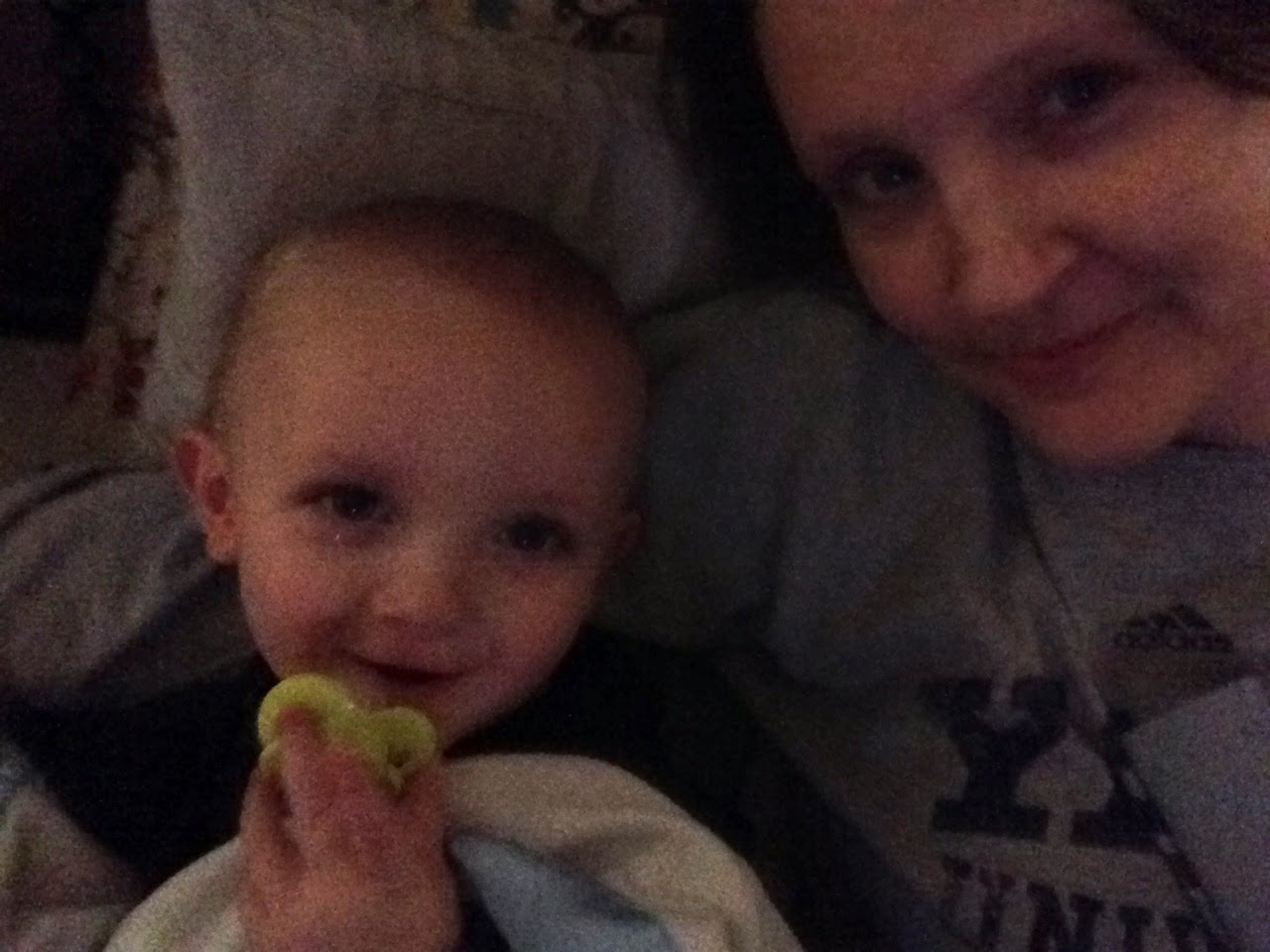 I've thought a good bit about machines this past week.  Trey & I have had more discussions about man's reliance on machines than I would've ever imaged possible.  Can you guess how much I care that people used to live without refrigerators?  Psssst: People also used to live without rocking recliners . . . & iPads, iPhones, flushing toilets, Diet Coke, & guns.

Fittingly, I've kept my sanity during the loss of the fridge & the dryer's brief rebellion not only by accessing Gilmore Girls on Netflix, but by spending too much time on my new MacBook perusing Twitter, where throngs of witty conservatives are having way, way, way too much fun with this whole Hillary-Clinton-is-a-big-fat-liar-felon thing.  Hill's folks & the Obama Administration are already bickering over who knew what when, & I am popping the corn.  Get her, Trey Gowdy.  Get. her.

My assumption is that when I return to you, our house will once again be home to a functional fridge, a functional recliner, & a functional marriage.  Here's to kids drinking cold milk, daddy rocking silently, & mommy nursing her sanity with hot coffee, the production of which has, blessedly, been in no way hampered during the past week's trials.