Well, welcome to fall.  It's rather delicious outside this morning.

I know you can't stand it any longer, so I'll forgo any additional pleasantries & tell you what you want to know.

Yes, I finished reading When the Elephants Dance before my book club meeting last Thursday night.  Actually, I had about ten pages left when I sauntered into the Cracker Barrel Thursday evening, but I knew enough to contribute to the discussion at what turned out to be our smallest book club gathering yet.  There were only three of us, but we had a lovely time, & honestly, I think we each deserve a trophy or something for having read the book, which I shall discuss in greater depth soon.

I wish I had more good news to share, but alas, at present I know as much as you do about the results of Henry's blood work I told you about last week.  I guess in the age of Obamacare, "results will take four to six weeks," is translated, "results will take at least eight weeks."  I'm sure it's explained in some English to Obamacare manual right after, "If you like your plan, you can keep it."  Apparently before sending off blood samples for the detection of autoimmune antibodies, the good folks at UMMC (University of Mississippi Medical Center) Pediatric Research wait until a sufficient number of samples have been collected & then ship them off en masse.  Henry's sample was one of the first taken in a new shipping cycle, & so I got a call last week informing me that results would take another two weeks.

The good thing about having two young kids is that you don't have a lot of time to obsessively worry about them because, well, you have two young kids.  So, I begin another week of waiting to hear about the blood test.  I am sure it will busily fly by in a tired whir of diapers, tantrums, sweet hugs, & stolen moments during which I delve into fiction.  I should tell you that I have one of my birds to keep me company this week.  Soon after posting last week's blog, I headed over to World Market's website to order my bird prints.  Sadly, instead of the option to "Add to Cart," I was confronted with the dreaded "Unavailable Online" notation.  I immediately texted my go-to big city shopper, Jessica, to inquire about any plans she had to visit one of the many World Market stores in the DFW area.

About an hour later, I received a phone call from Jessica; she was speaking to me on location inside World Market with the news that only one of the prints was available in the store.  This story does end well, however.  Jessica & co. came to visit over the weekend, bringing with them my one bird print, which (I think) looks fantastic.  Additionally, Jessica was informed by the World Market salesgirl that the set of all three prints should be available online again in the near future . . . so now I can add "stalk World Market's website" to my list of highly anticipated fall activities.

I realize I've been throwing around the phrase "new furniture" a lot on the blog, & you've yet to actually see any of it, so here is the china cabinet, complete with my lone bird perched atop: 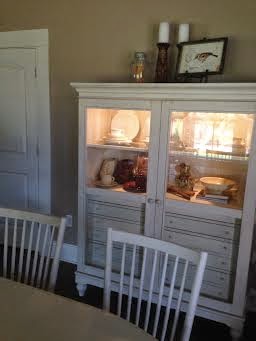 In regard to the cabinet, I'd like to stress that when it comes to the knick knacks up top, I have not yet begun to decorate.  It's a work in progress, a work that begins with one small bird (& two candlesticks & some fake corn).  I have a loose deadline for decor completion, as the book club is meeting at my house at some point in December to discuss Pride & Prejudice.  So, I have roughly two months to secure two more bird prints & figure out what other pieces will pay the birds the ultimate compliment.


In addition to not having a lot of time to obsessively fret over your kids because of said kids, you also don't get to sit still & watch much college football, which can sometimes be a blessing.  Oh, where to begin?  I feel kind of meh over LSU's loss.  I mean, at the beginning of last week, half the teams in the Top Ten were SEC Western division teams (Alabama, Auburn, A&M, LSU, & Ole Miss).  That is a set-up for some serious carnage.  LSU's loss to Mississippi State was dubbed a "shocker" by the media, who stopped talking about Jameis Winston long enough to note that LSU lost in a "shocker."  I wasn't all that shocked.  I knew LSU was overrated sitting at No. 8, & I knew Mississippi State was likely flying a bit under the radar, which can happen when your division includes Alabama, Auburn, Texas A&M, etc.  I think Mississippi State may "shock" a few other teams as the season unfolds.

When you play in the SEC, you have to prove your worth in September, & in October, & in November, rather than being put to the test in January after spending a restful fall playing few, if any, ranked teams & skating through your conference title game, assuming of course your conference has a title game . . . assuming of course you play in a conference (looking at you, Irish).  I think at present every team in the SEC West is ranked with the exception of Arkansas (this is me, refraining from inserting an AR joke, because goodness knows even the best LSU team can find a way to lose to AR).

So, Saturday didn't go as I might've hoped.  Obviously I was hopeful LSU would defeat Mississippi State, but in my gut there was an ominous feeling about the game (likely similar to the feeling that will plague me come Thanksgiving when I eat too much & then watch LSU play Texas A&M . . . indigestion, what a fantastic new holiday tradition).  I was hoping Clemson would upset Florida State, & I was hoping Washington State would upset Oregon.  I was also hoping to not see Jameis Winston's face as often as I did, but the day just didn't go my way where football was concerned.  What softened the blow tremendously was crawling in bed Saturday night knowing Silver Linings Playbook is currently offered on Netflix.

I know what you're wondering.  You're wondering if I was hoping West Virginia would upset Oklahoma.  A funny thing happened Saturday.  I have a friend who grew up in Oklahoma.  I like her.  She's a reader, a thinker, & a coffee drinker.  I shared a meal with her & another friend last Thursday night, & it was time well spent.  We ate, we drank coffee, & we talked about books.  It was glorious.  On Saturday, as I was gearing up to cheer for the West Virginia Mountaineers (& cast a voodoo spell or two on Bob Stoops), my friend came to mind.  You can tell she loves Oklahoma, & I don't just mean the Sooners.  She loves the place, the land, the people; it's genuine & it's refreshing, as is she.  In what has to be a maddening situation, she finds herself living far from Oklahoma, surrounded by a crazed SEC mob.  What I haven't told you is that she's married to a Texas fan - - Texas, as in Austin, orange & white, horns, the whole ordeal.  With all this running through my mind, I found myself not giving Bob Stoops the evil eye Saturday.  While I didn't watch every down of the game, I didn't obsessively check Twitter in the hopes of seeing an upset alert from Sports Center either.  This is friendship, y'all.  I think I am growing as a person.

I mentioned that Jessica & her crew came to town over the weekend, & this necessitated a trip to Nana & Papa's Saturday afternoon.  Here's a snippet of what was going on Saturday in lieu of me sitting on the couch watching football all day: 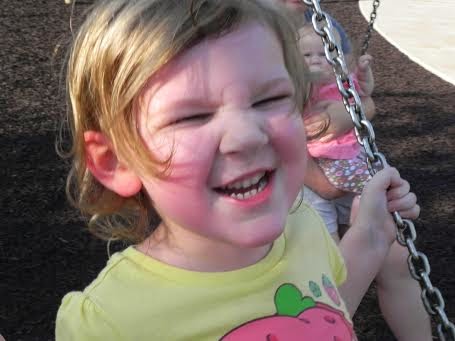 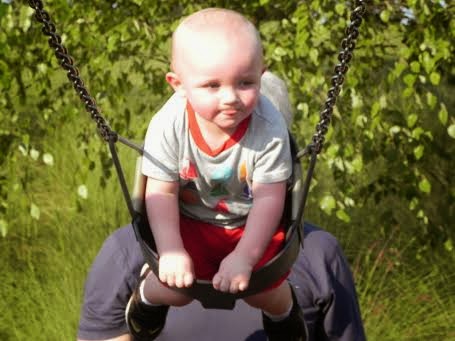 Well, this feels like an ending to me.  I have some things I need to grade, though what I'm likely about to do is make today's third cup of coffee & read Wool, a book by Hugh Howey that my dad recommended.  They just don't pay me enough for me to grade with any sense of urgency, particularly when there are so many things I want to read at the moment.  I realize I've yet to expound on When the Elephants Dance, but please, don't you fret.  I need to let it sit & simmer awhile, so stay tuned.

Those of you who're locals, enjoy this week's cooler temps.  Rumor has it the morning lows may dip into the fifties.  Now if you'll excuse me, I have boots & scarves to dig out of my closet, & a website to stalk.