This week I return to adjunct teaching, & summer officially draws to a close.  Well, I don't know if it's "official" on the calendar, but two days a week I will shower & put on non-pajama clothing in an attempt to appear professional & non-momish in front of a room full of students, so in my world, that means summer is over.  This will always be the summer that Henry was born, & so before it slips away, I am finally sitting down to finish typing my recollection of the events surrounding his birth.  If there is any purpose to this blog, it is to provide my kids with a record of their lives, our lives, & so here, Henry, are my memories of your grand entrance into this world.

I should have known.

On Wednesday, June 5 of this year I posted this blog around noon.  To quote myself, something I don't often do, I encouraged my unborn son to, "come on out."  My sister was in town on baby watch, & Jessa, my mom, Reagan, & I had plans to eat dinner at the Warehouse that night because I was on a serious salmon kick (Trey & my dad had work obligations . . . we generally allow them to dine with us).  The night before I had (painless) contractions that became so regular I got in the shower at midnight to wash my hair, certain I would end up at the hospital before the sun rose . . . but nothing came of the painless contractions & I awoke, still hugely pregnant, in my bed Wednesday morning, excited about the salmon I planned to inhale that evening.


A few odd things happened during the day Wednesday that I felt might jeopardize my salmon dinner, but I made it to the Warehouse at the appointed time & savored their salmon over jalapeno cheese grits.  At one point during the day I think I was actually bargaining with Henry, telling him I really wanted to make it to dinner & enjoy the meal, & then I'd give him the all clear.

The boy listens to his mama.  That Wednesday evening around ten thirty I was in bed fast forwarding through most of an episode of Days of Our Lives on the DVR when I noticed slight pain.  It was mild, y'all, but it was different than the painless contractions I'd been having for weeks in that there was pain.  So, I turned off Days & began googling & reading posts about signs of "real" labor on all sorts of pregnancy message boards.  The general consensus was when labor is real, you know.  So, okay, I thought.  You know.


It was by this time after eleven o'clock.  I did all the things they say to do that will ease "false" labor.  I drank some water.  I breathed deeply.  I walked around the room.  By eleven thirty, it was becoming obvious nothing was subsiding.  I was in increasing pain, &, according to the stopwatch on my iPhone, was having regular, painful contractions.  I began shuffling around the bathroom making sure everything I needed was in my suitcase, & sometime before midnight - - by which time I could no longer stand up straight - - I hollered from the kitchen to let Trey, who was dozing in his recliner, know that he needed to call his mom to come stay with Reagan.  I called my mother &, still thinking it would be hours before Henry arrived, I told her I'd call her from the hospital to let her know how far along I was.  Wise woman that she is, she knew from hearing my voice over the phone to head for the hospital.


Trey & I made it to the hospital around one in the morning.  My contractions became ridiculously painful during the drive there.  They were lasting about a minute, & I know this because I timed them on my iPhone so I would know exactly how many more seconds I had to endure the pain before a short reprieve came.  I could not speak at all during these contractions, & attempted to communicate this to Trey by flailing my arms & hitting the top of the truck when he said something that required a response from me during a contraction.  At one point he looked confused & I think I may have screamed, Wait until it's over!  My father-in-law (FIL) was waiting for us when we arrived, so Trey dropped me off before parking the truck as I stumbled into a wheelchair.

A few weeks prior to all this, I made a trip to the hospital to preregister for labor.  What a great idea, right?  You fill out forms & they make copies of your license & insurance information while you're smiling & completely free of pain so that these tedious tasks need not be undertaken when you arrive, bent over & screaming, weeks later.  When my FIL wheeled me up to the check-in-window on the Labor & Delivery floor, you can imagine my surprise when I was asked for my license & insurance card, & in return was handed a clipboard of papers to fill out.  I remember stating (screaming?) that I had preregistered, but I can't remember what explanation was given as to why I was again filling out forms, this time in immense pain, while my license & insurance card were again being scanned.


Once I made it past check-in & into a room, things happened fast.  It truly was incredibly rapid for a birth, though until I received my epidural, it felt like an eternity.  If you recall, the first pain I felt was around 10:30pm.  Henry was born at 2:32am; it's taken me longer to find time to sit & type all this out than it took to deliver him.


Anyway . . . the epidural.  Epidural.  Epidural.  It was all I thought about from the moment I began doubling over in Trey's truck until the anesthesiologist stuck that long, beautiful needle in my back.  I was dilated to four, maybe five, when I requested my epidural with Reagan, & the pain was still manageable (though I could tell horror was just around the corner).  When I arrived at the hospital the night Henry was born, I was dilated to six, & horror was upon me.  To anyone reading who's ever experienced back labor, may the Lord show you special favor.  The contractions were in my back, & I can say with absolutely no reservations that it was the worst pain I have ever felt.  Clearly I requested my epidural immediately, however . . . yes, paperwork was required.  I signed & initialed & signed & initialed some more in between contractions.  I didn't read a word of what I signed & initialed.   Somewhere in between the paperwork & the insertion of the glorious needle in my back, Dr. Sheppard arrived, fresh-faced & smiling despite having been roused in the early morning hours.  Between her arrival & the epidural, I was feeling pretty fine by the time I started pushing.

I'm not sure how long I pushed.  It wasn't long, but my ability to gauge the passage of time is skewed; the whole event can best be understood in terms of BE (before epidural), & AE (after epidural).  Everything that happened AE seemed like a wonderful dream, including the arrival of my son at 2:32am on D-Day (which I hope everyone reading knows is June 6!). 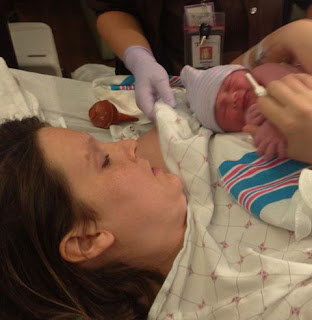 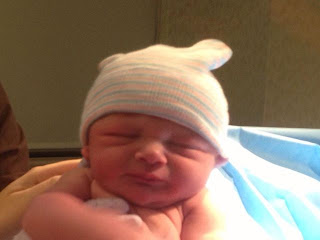 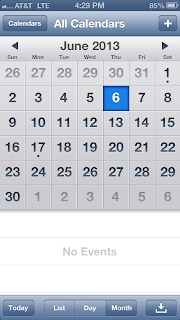 My blessings are immeasurable.  A year ago, I was beginning another fall semester of teaching & praying for my second child.  When I say praying, I mean highly specific prayers not only for a healthy baby, but a baby conceived on my timetable, meaning a late May, early June birthday that would allow me a few months to stay home & adjust to caring for two kids before I returned to teach in the fall.  I'd always include a prayerful disclaimer communicating to the Lord my understanding that my timing is not always His timing, but I guess He knows how much of a planner I am & smiled & let me have my way on this one.  Thank you, Lord, for Henry.  And epidurals. 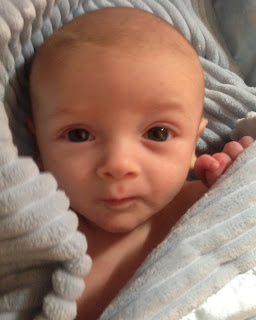