On February 6, 1911, Ronald Wilson Reagan was born in Tampico, Illinois.


On the cusp of a world war, America couldn't have known the impact this young boy would have on her future, & certainly no one, save the good Lord, knew that nearly a century later, a pretty blue-eyed girl would be given his name by her fiercely conservative parents.

Interestingly, at least to me, Reagan's final film, The Killers (1964), is based on a short story by Ernest Hemingway (isn't it fun when obsessions collide?).  The opening line of the story reads, "The door of Henry's lunchroom opened and two men came in . . ."  "The Killers" first appeared to the public in Scribner's Magazine in 1927, the same year my childrens' great-grandfather, Donald Henry Zeigler, was born on . . . February 6.

Perhaps our household will celebrate February 6 as namesake day, because both of our children take their name from fine men born on that day.  It's been monogrammed on a pillow sham from Pottery Barn Kids, which is about as official as it gets . . . 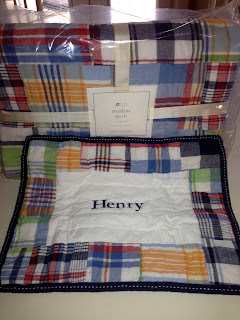 Our son will be named Donald Henry Zeigler, IV, & will be the first of the DHZs to make use of the middle name, Henry.  Henry has a name, & Henry's mom is in the process of making sense of the chaos in the room that will be Henry's.

You may recall my recent post about my search for Reagan's bed.  Don't tell Henry, but . . . this cute grey crib below is from . . . Wal-Mart.  Odd, I know, since Wal-Mart is a place Henry's mom never goes, but I found it online & in a few short days, it arrived at our front door.  They would've shipped it to our local Wal-Mart for free, but when I explained to Trey that would mean the two of us making a trip to Wal-Mart together to retrieve the bed & load the box in his truck to haul home, he agreed we'd pay the $10 extra to have it dropped at our front door. 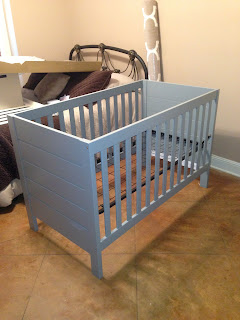 Included in the price of the bed is a toddler rail, but this one doesn't convert to a full size bed, so I don't feel too bad about the astronomical price difference in Henry's bed when compared with Reagan's.  More to come on Henry's room soon, including the conversion of a piece of fabulous solid oak furniture that belonged to my great-great-grandfather into a changing table.  I promise, it will be soon, as I realized earlier this week that if my water breaks at the same point in this pregnancy that it did with Reagan, Henry will be here in eight weeks.  Have you seen me lately?  Thirty-nine weeks was never part of my vocabulary in my first pregnancy, & I doubt it will play a role in this one.

Thursday I had a second ultrasound.  I can attribute a little over 3 of the pounds I've gained to Mr. Henry.  I guess the other _____ are all mine. 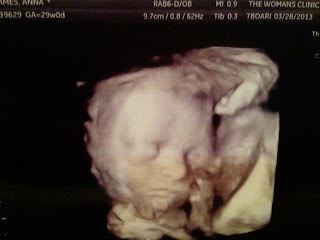 He was curled up like this for nearly the entire ultrasound, perhaps pondering why he's running out of room to perform the flips & rolls of which he's grown quite fond: 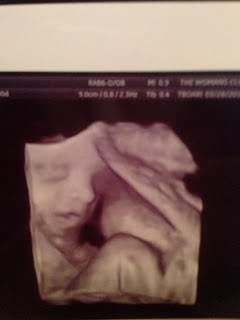 Henry has a name, Henry has a crib, & while his room is a work in progress, Henry already has better socks than I do: 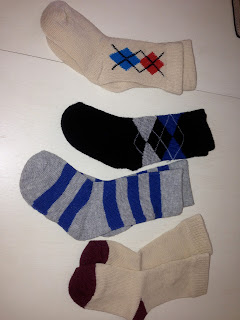 I must close by mentioning to anyone to whom it hasn't already occurred which is admittedly probably anyone reading that the narrator of Hemingway's A Farewell to Arms is . . . that's right . . . Frederic Henry.