Part of Your World

Perhaps no four words in the Bible carry as much weight as these four, found in John's gospel: ". . . the Word became flesh."  They're words much of the world will hear this month as Christmas approaches. 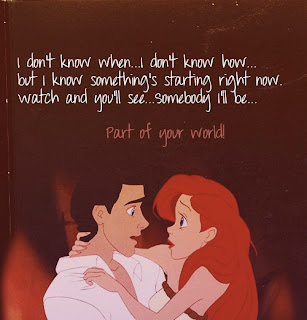 For much of my life, I've loved The Little Mermaid.  I think it's Disney's best, certainly in terms of soundtrack quality.  I don't know if it's hereditary, but Reagan is currently obsessed with the film, & all things Ariel.  The two phrases she utters the most are, "Start again," referring, of course, to the movie, & "Ariel sing song again."  In the future, I might not encourage Reagan to love the things I love until she's older & has a better understanding of how to *healthily* obsess over something.  I don't want to end up cringing when I hear Edward Cullen.  At present, if I never watch The Little Mermaid again, it will be too soon.

When I was in graduate school, one of my professors gave us an article to read that was highly critical of The Little Mermaid.  As you probably know, Disney has come under fire for creating unrealistic expectations for young girls, sending them the message that happiness equals finding your Prince Charming.  While searching for their prince, Disney's princesses are usually left to their own devices, absent the guidance of any strong, likable mother figure.  Belle of Beauty and the Beast has an absent-minded father & no mother.  Cinderella is surrounded by evil women who wish her harm.  Ariel's predicament is considered by many critics to be the most appalling.  She is so desperate to become human in order to be with Prince Eric that she tangles with the horrid Sea Witch, Ursula, a grotesque figure who demands Ariel give up her voice in exchange for a human form.  This was the sticking point for the author of the article I was assigned in grad school; Ariel, an impressionable young woman giving up her voice, which of course the author saw as metaphorical, to be with a man.

The Disney princesses aren't total hapless airheads, mind you.  Ariel's critics fail to mention that Eric is around to sweep her off her feet because she saves him from drowning.  Ariel is also contrasted with her six sisters, all of whom seem perfectly content with their life under the sea, displaying none of Ariel's curiosity about the world beyond the nautical.  Ariel & her father routinely argue over her trips to the water's surface, but by the movie's conclusion, Ariel has won over her skeptical father, King Triton, who grants Ariel her long-desired human form.  I've always wondered why Triton was so wary of life beyond the sea, considering that during the course of the movie, Ariel is almost eaten by a shark, & then becomes ensnared in the wily ways of Ursula, exchanging her voice for three days as a human during which she must find true love with Eric.  Belle is perhaps the most noble of the Disney princesses, although technically Belle is not a princess, as her father is a goofy inventor.  In fact, her father gets lost in the woods & is taken prisoner by the Beast, & Belle selflessly offers to take his place, & then proceeds to grow to love the seemingly unfeeling Beast.  Belle also loves to read, & continually rebuffs the advances of the arrogant Gaston, the town's most eligible bachelor who has a harem of busty ladies always at his side.

Lately I've been rethinking all that I've read about the negatives of Disney films, particularly The Little Mermaid, due to Reagan's attachment to the redheaded heroine.  I don't think Disney is doing young women a great harm.  Disney is not imbedding ideas in young girls' minds, in my opinion.  Females, both the young & not so young, don't need a Disney film to inform them of their desire to find a prince. Disney isn't creating this desire; they're cashing in on it.  It's amusing to me that critics of Disney's films are crediting Disney with instilling a desire in young women that, in my opinion, God created.  God created men and women for each other, & their union is, ideally, to His glory. It's up to Trey & I, not Disney, to mold Reagan's idea of what a true prince is as she ages.  If she loves Prince Eric right now, well, I can't blame her.
It occurs to me that Ariel's longing for a human form is one of the things that's always intrigued me about the film.  She loves a human, a species different from her own, & she begins exploring her options.  This dilemma isn't exclusive to Ariel, however, nor is it limited to animated Disney characters.  Belle falls in love with the ornery, inhuman Beast without knowing that her love will transform him into the handsome prince he once was.  Bella, of Twilight fame, wants to be transformed into a vampire so she can spend forever with her vampire love, the immortal, beautiful Edward.  In Stephenie Meyer's non-Twilight novel The Host, interspecies love is prominent.  There are no vampires, & I don't love the book as much as I do the Twilight novels, but it's an intriguing read.  The movie will be released in March & I'm excited to go see it with my book club; we all read The Host this past summer.  It is a great book club read because when you finish, you're desperate for a group of fellow readers with whom you can attempt to make sense of the novel.  It's not a novel I gush about, but it made me think, & I'm glad I read it.

From Ariel to Batman to vampiric envy, we are fascinated by the idea of becoming something beyond ourselves, and one way to do that is to love someone who is, at least in our eyes, more than we are, better than we are in some way.  Our films and our literature are filled with characters desperate to transform themselves in order to bridge a reconciliation with those they love. This theme is, as we know from Beauty & the Beast, a tale as old as time.  It's what Christ did for us.  He didn't give up his human form in order to become a vampire, or shed his mermaid fins in order to walk on two feet; Christ gave up equality with God because it was the only way to prevent Him from being permanently separated from those He loves.  He did it knowing some would never reciprocate His love, or understand & appreciate His sacrifice.  It's the greatest transformation story there is, & it's no wonder the idea continues to permeate our culture.  This time of year, much of the world focuses on Christ in the manger, & what a spine-tingling thought that is; God leaving the Heaven that He created, taking on the lowly form of a human, knowing what He would endure.  The Creator became the creation.  The story doesn't end with His transformation, however.  Because He became flesh, the imperfect humans he loves so much will one day shed their mortality & be given a glorified body in which to live in His presence forever, if they simply return His love & live for the day that they will be transformed.
Just as the fascination young girls have with Prince Charming is not manmade, neither is the preoccupation we have with the notion of transformation.  While the idea of being transformed is presented as fantasy in pop culture, Christians know differently.  Because of Christ's willingness to become flesh, all Christians await a transformation of their own, a shedding of the flesh that is slave to sin, that will make possible the elusive 'forever' with Christ, & all those we love who love Him.  There are lessons to be learned from Ariel & Belle, but the transformative power of Christ is the story children need to hear.  His love is worth changing for, His world is the one you want to be a part of, & any prince worth having will be seeking the same transformation.