The Gifts of the Greeks

After many years have slipped by,
the leaders of the Greeks, opposed by the Fates,
and damaged by the war, build a horse of mountainous size . . .

Then Lacoon rushes down eagerly
from the heights of the Citadel
to confront them all, a large crowd with him,
and shouts from far off:
'O unhappy citizens, what madness?
Do you think the enemy's sailed away?
Or do you think any Greek gift's free of treachery?
Is that Ulysses' reputation?
Either there are Greeks in hiding,
concealed by the wood,
or it's been built as a machine
to use against our walls,
or spy on our homes,
or fall on the city from above,
or it hides some other trick:
Trojans, don't trust this horse.
Whatever it is, I'm afraid of Greeks,
even those bearing gifts.'" 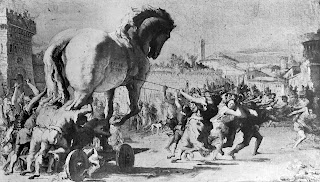 Reagan's first Republican National Convention was cut short a day by her first hurricane, Isaac; I was pleasantly surprised by several of the speakers in the three days that remained.  I thoroughly enjoyed Condi Rice, Paul Ryan, & Marco Rubio's speeches, & while Ryan & Rubio give me great hope for the future of the Republican Party, & this nation, I want to discuss a comment John Boehner made.

Early Tuesday evening, I was traversing my usual route from the kitchen to the living room & back (with the occasional detour to Reagan's room to pick up a wayward doll in the Pink Coupe) while Reagan moved from one Little Tikes apparatus to the next.  I managed to hear a few snippets of Boehner's remarks.  Reagan, Boehner is a Republican representing Ohio's 8th district, & he is the current Speaker of the House of Representatives.  By the time you can read this, he'll likely be irrelevant on the political scene.  I don't think I've ever quoted Boehner, & I doubt I do again, but during his remarks at the RNC he stated that Obama ". . . can't fix the economy because he doesn't know how it was built."

It's perhaps the first thing Boehner, who is a nice enough guy but not all that inspiring a politician, has ever said that gave me pause.  It's a simple principle, I suppose, the idea that you can't fix something when you've no understanding of, or appreciation for, its inner workings.  Obama has made it quite plain that he associates economic growth with government, or with the "central planners," to borrow a term from Paul Ryan's RNC speech.  Obama's faith is in the federal government, it would seem; he believes all good things begin with the central planners, of whom he is chief.  Every decision he's made in the past four years has been a testament to the extent to which he devalues the American individual; I don't think it's a stretch to say that he holds the American individual, certainly the American business owner, in contempt.

Perhaps Boehner is right, & Obama's economic policies can be explained by his genuine belief that by spending trillions of dollars it doesn't have, the federal government can create jobs & invigorate a struggling economy.  Here's a theory.  What if Boehner is wrong, & Obama does in fact understand how the American economy was built, & he has taken deliberate steps to incapacitate it, thwarting the efforts of hardworking Americans at every turn, & creating millions of government dependents in the process?  His policies are not only reshaping the economic landscape; his policies are altering the definition of what it means to be a free American, which once meant freedom from tyranny.  Obama is shackling us all with the cumbersome chains of debt, to borrow a term from Joe Biden.  No debtor is free, & no nation that shackles not only itself, but its children not yet born, with debt can rightly call itself a free people.

Maybe Obama is nothing more than a dyed-in-the-wool liberal who in good faith thinks his economic policies are the best way to pave the road to economic recovery.  It's possible he sincerely believes he is doing what is best for America, for her economy, for her people.  It's also possible he spent the last four years carefully taking calculated steps he knew would lead to further economic turmoil, cripple the American middle class, & break the will of hard working people, leaving them no choice but to trade a little of their freedom for a government check, all while he dug an economic hole unprecedented in our history.

Obama may know exactly how the American economy was built, what drives it, & what will bring it to a grinding halt.  Who can dismantle a car more efficiently than a skilled mechanic?  Who can take a kidney from a selfless parent and transplant it seamlessly into an ailing child with more precision than a doctor?  Who better to disrupt & destabilize the American economy than a man whose ideological underpinnings align with those of Saul Alinsky, who sat in the pew soaking up Jeremiah Wright's words, & who began his presidency with a worldwide tour during which he apologized for all the many ways he felt America had wronged other nations.  As Alinsky states in his Rules for Radicals:

. . . the answer I gave the young radicals seemed to me the only realistic one: "Do one of three things. One, go find a wailing wall and feel sorry for yourselves.  Two, go psycho and start bombing - but this only swings people to the right.  Three, learn a lesson.  Go home, organize, build power, and at the next convention, you be the delegates."

Mr. Alinsky asserts, also in Rules for Radicals, that, "In the beginning the organizers first job is to create the issues or problems."

Perhaps the debt Obama is shackling us with is the culmination of a deliberate plot born of resentment & contempt for hardworking, free people.  The alternative is that in good faith, he's adhered to an economic ideology that, despite repeatedly failing in the past, he believes is the path to economic recovery.  Either Obama is indeed exactly like his political predecessor, Jimmy Carter, an idiot who genuinely thinks it's possible to tax & spend your way into prosperity, or, he's a disgruntled saboteur whose machinations I pray Mitt Romney & Paul Ryan can begin to untangle in a few short months.  To quote Virgil, "Whatever it is, I'm afraid of Greeks, even those bearing gifts."