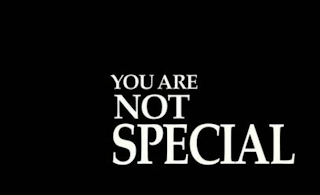 You may've heard or read something recently about a commencement address delivered by David McCullough, Jr., an English teacher at Wellesley High School in Boston.  Don't confuse him with his father, an author & two-time Pulitzer Prize winner (& also an English major).  I don't know if Mr. McCullough titled the speech prior to its delivery, but it will forevermore be known as the 'You're Not Special' speech.

I'd heard bits & pieces of news snippets about the speech, which was delivered June 1 of this year, but hadn't paid it much attention until I was driving to the grocery store Monday & listening to Rush Limbaugh, who played lengthy excerpts of the speech, interspersed with his commentary, of course.

This links to a transcript of Limbaugh's June 11 show, which includes the portions of the speech he played on air.  This links to a YouTube video of the entire speech.  I almost wish it were already August so I could play the video for my Public Speaking students.

Here's the portion Rush played that caught my attention (this comes near the end of the speech):

Like accolades ought to be, the fulfilled life is a consequence, a gratifying by-product.  It's what happens when you're thinking about more important things.  Climb the mountain not to plant your flag, but to embrace the challenge, enjoy the air, and behold the view.  Climb it so you can see the world, not so the world can see you.  Go to Paris to be in Paris, not to cross it off your list and congratulate yourself for being worldly.  Exercise free will and creative independent thought not for the satisfactions they will bring you, but for the good they will do others -- the rest of the 6.8 billion and those who will follow them.  And then you too will discover the great and curious truth of the human experience is that selflessness is the best thing you can do for yourself.  The sweetest joys of life, then, come only with the recognition that you're not special, because everyone is.

Rush commented that . . . all the things that used to introduce us to reality have been perverted now in order to increase our self-esteem . . . from tests, to sports, to grades.  Lowering standards to become a cop or a firefighter for women.  Lowering standards for entrance into college everywhere.  In the interests of not hurting anybody's feelings.  In the interests of making sure everybody's feeling fine and okay.  And the problem is the real world isn't like that.  And I think -- I really do think -- some of the problems that we have in our culture involving crime and some of the problems we have culturally with a moral decline are rooted in this notion.

I agree wholeheartedly with both men.  Rush continued . . .

My fear is that all too many teachers today are, in fact, teaching their students that the world does owe them a living. And it's not just youthful people. It's not just young people being told the world owes them a living. We have civil rights groups in this country telling their charges, 'America owes you a living because you're a minority and because of things that happened hundreds of years ago, or thousands of years ago. The world, this country owes you a living.'

Obama believes the country owes people a living. I believe... I honestly believe that, as I just told Snerdley during the break. I think Obama is a classic example of what this teacher was warning about. I think Obama, his whole life, has heard this. One of the ways to explain him is that he was taught how "special" he is. If he needed an A, some teacher gave him an A when he only deserved a C. The way was paved for him, and he has trouble dealing with criticism now. He has trouble dealing with people not reacting in awe. He's the embodiment of it, the walking embodiment of it.

Rush astutely highlights Obama as a warning of what happens when people are told they are special, treated as such, & handed things they did nothing to earn & are in no way qualified to handle, despite resume gems like "community organizer."

Teaching children that they have intrinsic value because they were formed in the image of God, & because His son gave His life for them - that He would have done so even if they were the only individual who needed a Savior - is a sobering message that both humbles and empowers a believer. Instead of teaching young people this life altering concept, they're inundated with hollow politically correct garbage that sets them up for failure & disappointment.  They look on as we laud a man who was elected President of the United States by feckless voters who bought the lie that not being pasty white was a more important qualifier for the highest office in the land than having any actual relevant experience.

There is nothing wrong with a healthy self-esteem, but true self-worth can only come from the knowledge & acceptance of the fact that you are special because of the value bestowed on you by your Creator; it is His righteousness that grants you a place of honor, & without it, you - me, all of us - are nothing more than a filthy sinner. Rush didn't say all this, but I don't think he'd disagree with it. As Mr. McCullough said, "selflessness is the best thing you can do for yourself." In his commentary, Rush didn't point it out as such, but this is the cornerstone of Christianity, & something most people (humans being selfish by nature), cannot fathom. Even for those who have intellectually grasped the concept of God first, others second, me last, it's a lifelong struggle to prioritize in this manner.

Indeed, you're not special; it is only by the grace of God that any of us can make a claim to being anything more than a wicked sinner, mired in our own filth, without a means of cleansing ourselves. Many today are unable to even recognize their sin problem, the filth, for what it is, & some even glory in it, flaunt it, & accuse those who dare call a sin a sin of being intolerant.  In the most selfless act fathomable, Jesus gave us a way to cleanse the filth, to clothe ourselves in His righteousness.  That He would offer is truly the only thing that makes any of us special.

Parents think their children are special.  I've told Reagan this in the past, & I'm sure the words will grace my lips again.  However, my reasons for believing she is special are of little consequence to the world, & I'd be doing her a disservice if I lead her to believe otherwise as she ages.  Is she special because she's mine?  Because she was named after one of the greatest men to serve this nation as president?  Because she's an American?  Because she's got pretty blue eyes and long lashes I envy?  These are all things I love about her, but these alone don't make her special outside of our home, outside the blessed little corner of the world in which she lives, & what lies beyond is a world that can be downright cruel.  The only way to prepare her for it is to make sure she knows her true worth is derived from the fact that the Creator of the universe thought she was worth the life of His only Son.  That's it, & that's all there is.  Paul said it well, "For no other foundation can anyone lay than that which is laid, which is Jesus Christ."