Herodotus is quoted as having said, "Circumstances rule men; men do not rule circumstances."

I admit I'm only familiar with the quote because the character Niles on Frasier uses it in an episode, but nonetheless, I don't know that I agree with Herodotus' fatalistic view.

Last night I was busy doing something in the kitchen when I heard a ping from my iPhone that I recognized as the sound my phone makes when my Drudge Report application notifies me of breaking news.  Drudge is good about only sounding the alert when there is actual breaking news (unlike FoxNews, which I love, but they really have become the network that cried Breaking News).  I picked up my iPhone & read that Steve Jobs had died.

I have only cursory knowledge of Steve Jobs.  I know he was adopted, he didn't graduate from college, & he died yesterday as the former CEO of Apple.  Over the years, I've paid a bit of attention to news concerning him because I know he's responsible for the devices I love: my iPhone, my iPod, & my Mac, which I take almost everywhere (including my bed every night), & on which I am currently typing.  I have a relationship with my Mac that borders on being a bit unhealthy.

In 2005, Mr. Jobs delivered a commencement address at Stanford University, and he shared the circumstances of his meager beginning:

My biological mother was a young, unwed college graduate student, and she decided to put me up for adoption. She felt very strongly that I should be adopted by college graduates, so everything was all set for me to be adopted at birth by a lawyer and his wife.
Except that when I popped out they decided at the last minute that they really wanted a girl. So my parents, who were on a waiting list, got a call in the middle of the night asking: "We have an unexpected baby boy; do you want him?" They said: "Of course." My biological mother later found out that my mother had never graduated from college and that my father had never graduated from high school. She refused to sign the final adoption papers. She only relented a few months later when my parents promised that I would someday go to college.

His biological mother obviously valued education, which is commendable.  She couldn't have known that her little boy would end up in the home of Paul & Clara Jobs and that he would, like his adoptive parents, never graduate from college, dropping out after his first semester.  Who knows who Steve Jobs would have been or what he would have accomplished had he not been placed in the Jobs' home.  Perhaps they were exactly the parents he needed, offering love & support even when he dropped out of college and began attending meetings of "The Homebrew Computer Club."  There is a wonderful lesson about abortion and adoption in his story, and this article discusses that more fully.

Yesterday, the man who dropped out of college and proceeded to revolutionize technology died of cancer at age 56.  In life, he was so influential that even a hint of his health faltering could rock the stock market.  Rupert Murdoch described him as "the greatest CEO of his generation."  He created devices that have changed the way we think and function daily, and yesterday he succumbed to a disease that continues to baffle doctors and scientists.  Mr. Jobs, perhaps the most innovative creator and leader of his generation, met his Creator yesterday.  The moment after he died, his many inventions & his stock portfolio meant nothing.  Jobs himself said, ". . . all external expectations, all pride, all fear of embarrassment or failure - these things just fall away in the face of death, leaving only what is truly important."

Yesterday, we were reminded that even the best & brightest among us are mortal, & that science can only do so much, because only the Creator fully understands & can heal His own creation.

I hope in Reagan's lifetime a cure for cancer is discovered.  More than that, I hope she rules the circumstances in which she finds herself, rather than allowing them to dictate her path.  I hope she learns from her failures, as Mr. Jobs did, for he endured many failures as I recently learned from this timeline of his life.  I hope no matter what good Reagan does while on Earth, no matter what she might write or invent or create, she knows who her Creator is and lives so that she's ready to meet Him at any moment.  We should all do the same.

This is my greatest creation, iGenius: 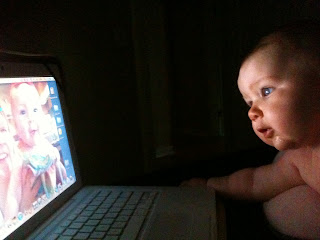