Backing up a bit, Friday night Reagan slept in her LSU pajamas, which she proceeded to poop all over Saturday morning.  Holding Reagan's legs while I cleaned up the mess, Trey commented that he hoped it wasn't a sign of things to come.  It was, at least where my day was concerned, because Reagan later pooped all over the LSU onesie that replaced the LSU pajamas.

Due to the explosive nature of her day, I didn't put Reagan in her cheerleading outfit until game time. 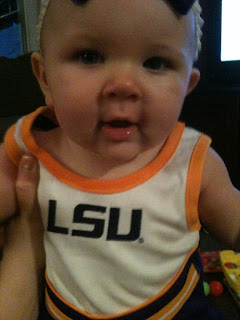 A good call on my part, as she was accident free, and relatively drool free, during the game.

The game provided an excellent opportunity to introduce Reagan to the language of an LSU fan, such as settling for field goals and . . . 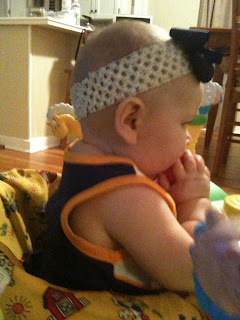 praying for a quarterback. 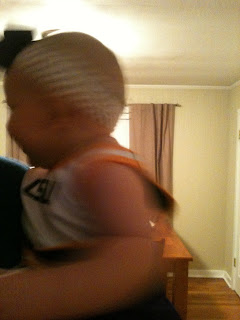 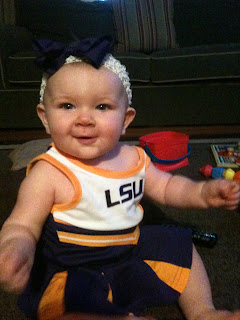 Are you kidding?  We missed an extra point? 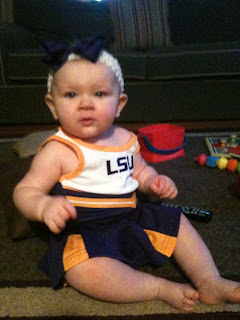 That could be a costly mistake were we not playing an overrated Pac 12 team.

Question: How many SEC teams have to dominate you before you're dropped from the top ten?

Come on Kirk & Brent, how many?

During commercials we flipped over to the Georgia game, which reinforced something we'd discussed earlier in the evening when Oregon took the field: flashy uniforms do not win football games.  While I'm on the subject of attire, who dressed Brent Saturday night?  That shirt/tie combo didn't help the Ducks (for whom you were so obviously rooting) anymore than their uniforms, now did it, Brent?  His tie was so distracting it was difficult to keep track of the various excuses he made for Oregon's defeat at the hands of a team that spent as much time with the BRPD as they did at practice this summer.

I may have to watch a replay of the game because I am still unsure of exactly how Brent feels about LaMichael James.

Reagan's morning surprise and Brent's bias aside, I remain ecstatic that it's football season, and the the fact that Lee didn't throw the numerous interceptions for which I had prepared myself is just gravy.  I have had unkind things to say about Les Miles in the past, but he is either one of the luckiest men to coach football, or he is much smarter than he sounds.  I think it's a little bit of both.