As soon as I learned I was pregnant, I started thinking of baby names.  As a teacher, I have learned that it is imperative to give your children good, solid, phonetically sensical names; it is a blessing that will follow them through life.  Being me, I opened a new folder on my desktop where I kept a word document that was full of lists of names I liked; I added to it & rearranged it almost daily.  Once I knew I was having a girl & was free to replace 'it' with feminine pronouns, I got down to business & was able to eliminate several names I'd wrestled with for a few months.  When I knew I'd be finishing sentences that began with My daughter, ____________, there were a few names I just couldn't see in that blank.

I'd had Rae on my list of girl names since the beginning, particularly as a potential middle name.  Trey's mother's maiden name is Ray, so it's a family name, & my friend Jordan's middle name is Rae, & I've always loved the name.  Rae remained at the top of all my name lists throughout pregnancy.

At some point during my pregnancy, my sister Jessica mentioned Reagan since I liked Rae &, if you didn't know, Trey & I are both fond of the late Ronald Reagan.  So, Reagan sat in the back of my mind for months.  I researched it online, pulling up Social Security records of how many babies were named Reagan in the past few years &, of those, how many were male & how many were female (Reagan is predominately used as a female name).  Reagan was one of the few names I'd mentioned that didn't elicit a resounding 'No' from Trey, & it grew on me.

I began pairing Reagan with various middle names (Rae was off the middle name list as it's obviously not a great middle name for Reagan).  I had briefly considered Elizabeth as a first name, but I knew and loved one Elizabeth & the name is weighted with emotion for me, so I didn't want to call my daughter Elizabeth.  I originally eliminated Elizabeth as a middle name since my cousin Jennifer's Marykate is Marykate Elizabeth, but then it occurred to me that I am Anna Marie & my cousin was Elizabeth Marie (& it's not like there is a rule that cousins cannot share a middle name).

On August 10 of last year, I ate a late lunch at Olive Garden.  I went on a soup & salad kick for a few months of pregnancy, so I frequented the Olive Garden.  As I waited for my food, I texted Trey the following (ignore the Call me - It's not lone star.  It's longhorn by the mall - i'm on the way): 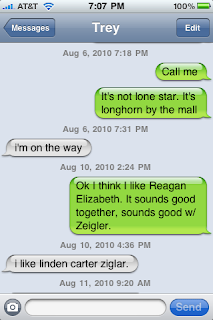 As you can see, Trey responded to my suggestion of Reagan Elizabeth with I like linden carter . . .  He had previously shot down my suggestion of Caroline with the reasoning that it made him think of the Kennedy family, which, admittedly, is a good enough reason for me to discard an otherwise beautiful name.

Thus, our baby girl was henceforth known as Reagan Elizabeth.