I frequently check The Drudge Report, a useful habit I picked up years ago from my sweet husband.  This week two articles caught my attention.  Yesterday Drudge linked to this article detailing the results of a recent Gallup poll on abortion.  According to the article, 61% of those polled feel all or most abortions should be illegal.  Included in this 61% were American adults who consider themselves to be "pro-choice."  In my opinion, some label themselves "pro-choice" because it is politically correct in certain circles to do so and/or because they have never taken the time to consider what is truly at stake.  "Choice" sounds good; we all want choices.  That the term "pro-choice" is commonly used to refer to people who believe abortion should remain legal is a semantic victory won by the media.  It insinuates that there is a choice to be made when a woman discovers that she is pregnant.  The "choice" is between giving the baby life, or playing God & ending the baby's life; unless a woman miscarries, those are the only 2 possible outcomes of a pregnancy.  That we linguistically equate pregnancy with other situations in which we're presented with "choices," such as a varied menu at Wendy's or numerous movie options at the local theater, is sickening.

There are a lot of other numbers in the article, but probably most infuriating to me is that only 27% of those polled felt abortion should be legal under any circumstances.  In most places in America, abortion is currently legal under any circumstances . . . despite a clear minority that believes this should be the case.  I suppose if we lived in a democracy where we voted on important issues, we could rectify this.

Also somewhat bothersome is that 2% of those polled did not know what the terms "pro-life" and "pro-choice" mean & another 2% had no opinion on the matter.  That's right - they have no opinion on the biggest moral issue to face this nation since slavery.  I suggest that after abortion, ignorance & apathy top the list of problems that, if not addressed, will topple this great nation.

Today, again courtesy of Drudge, I read this article on abortion in India.  Increasingly, families in India with one girl are deciding to abort subsequent pregnancies when it is discovered that the child is female.  Because of cultural traditions that dictate large dowries when girls marry, boys are overwhelmingly preferred in India.  My thoughts, aside from disgust, immediately went to the feminists who argue so vehemently for the 'right' that is eliminating their own kind.

This links to an article Ronald Reagan wrote for The Human Life Review in 1983 on the occasion of the  10th anniversary of the Roe v. Wade decision.  Below is the opening paragraph:


The 10th anniversary of the Supreme Court decision in Roe v. Wade is a good time for us to pause and reflect. Our nationwide policy of abortion-on-demand through all nine months of pregnancy was neither voted for by our people nor enacted by our legislators — not a single state had such unrestricted abortion before the Supreme Court decreed it to be national policy in 1973. But the consequences of this judicial decision are now obvious: since 1973, more than 15 million unborn children have had their lives snuffed out by legalized abortions. That is over ten times the number of Americans lost in all our nation's wars.


He concludes with this:

Abraham Lincoln recognized that we could not survive as a free land when some men could decide that others were not fit to be free and should therefore be slaves. Likewise, we cannot survive as a free nation when some men decide that others are not fit to live and should be abandoned to abortion or infanticide.  My Administration is dedicated to the preservation of America as a free land, and there is no cause more important for preserving that freedom than affirming the transcendent right to life of all human beings, the right without which no other rights have any meaning.


Take a moment to read the entire article.  Obviously the 15 million lost to abortion has risen dramatically since Reagan penned this in 1983.

We are foolish to wonder why so many aspects of our society seem to be falling apart; many children grow-up with absolutely no respect for anyone, often themselves included.  Ronald Reagan answered this question for us in 1983: We cannot diminish the value of one category of human life — the unborn — without diminishing the value of all human life.

This links to the U.S. National Debt Clock.  Maybe if there were a similar live count of babies aborted the public would be more alarmed at what happens daily in this nation.  Sadly, I believe most of our legislators would be about as eager to do something about the number of abortions performed daily as they are about the skyrocketing national debt.

I pray that in my Reagan's lifetime America can again elect a president who values human life at all stages and who unashamedly tells the American people they have been stripped of their right to vote on this issue. 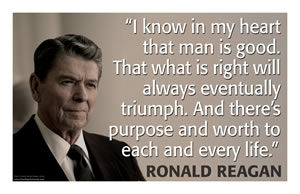